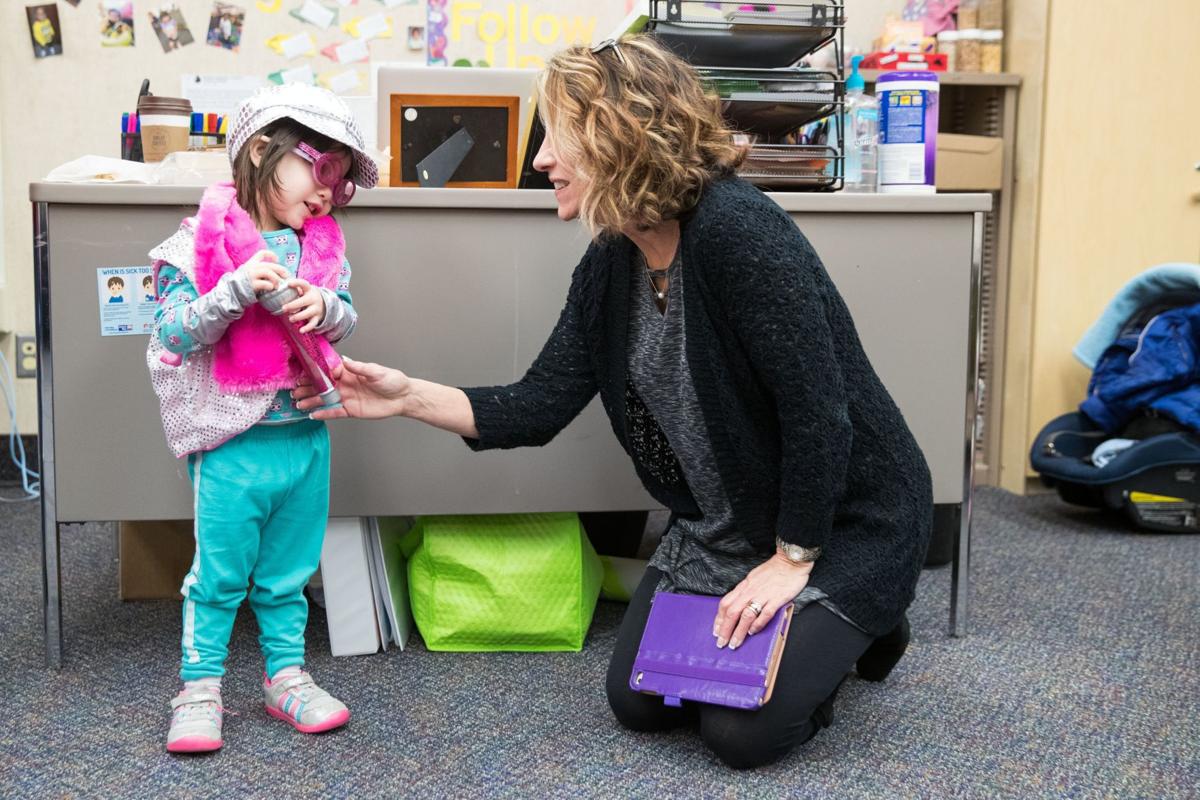 2-year-old Angelina Mai played dress-up at Pinewood, and her outfit caught the attention of Mary Beth Pistillo of the Buffett Early Childhood Institute. 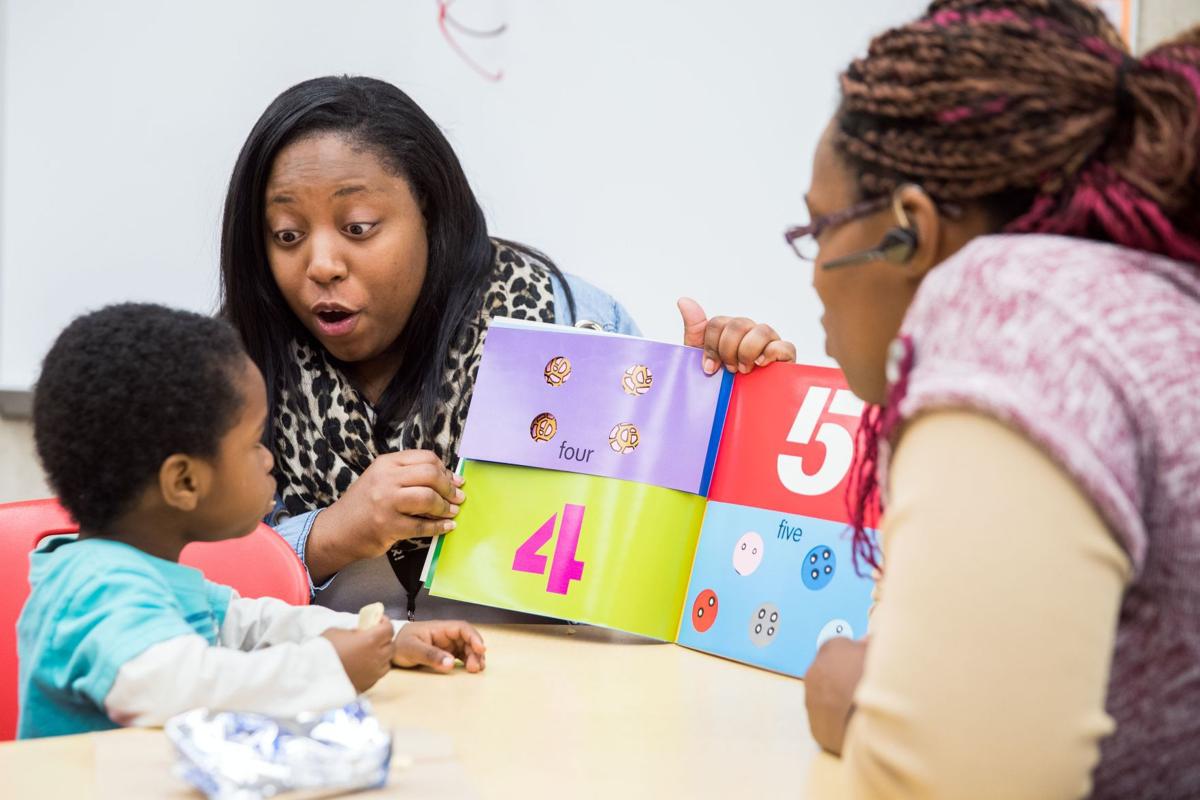 Pinewood Elementary staffer Tierra Stennis reads a counting book to Max Clark, 2, during a “Drop in and Play” session at the school. Max’s mom, Erin Clark, is at right. 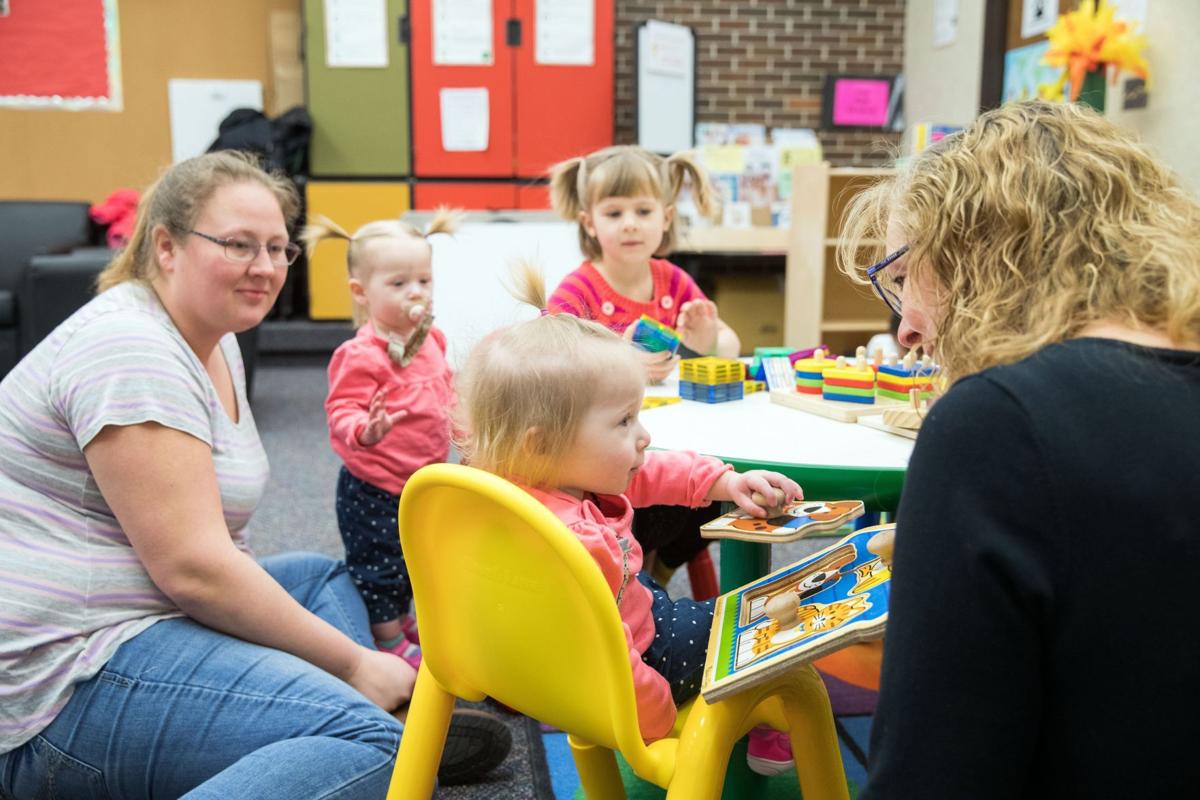 Cindy Wheeler, left, attended a recent “Drop in and Play” at Pinewood Elementary with her three daughters, Addison, 4, Kenzee, 1, and Madalynn, 1. The girls got some reading time in with Pinewood Principal Kristi Reinsch. 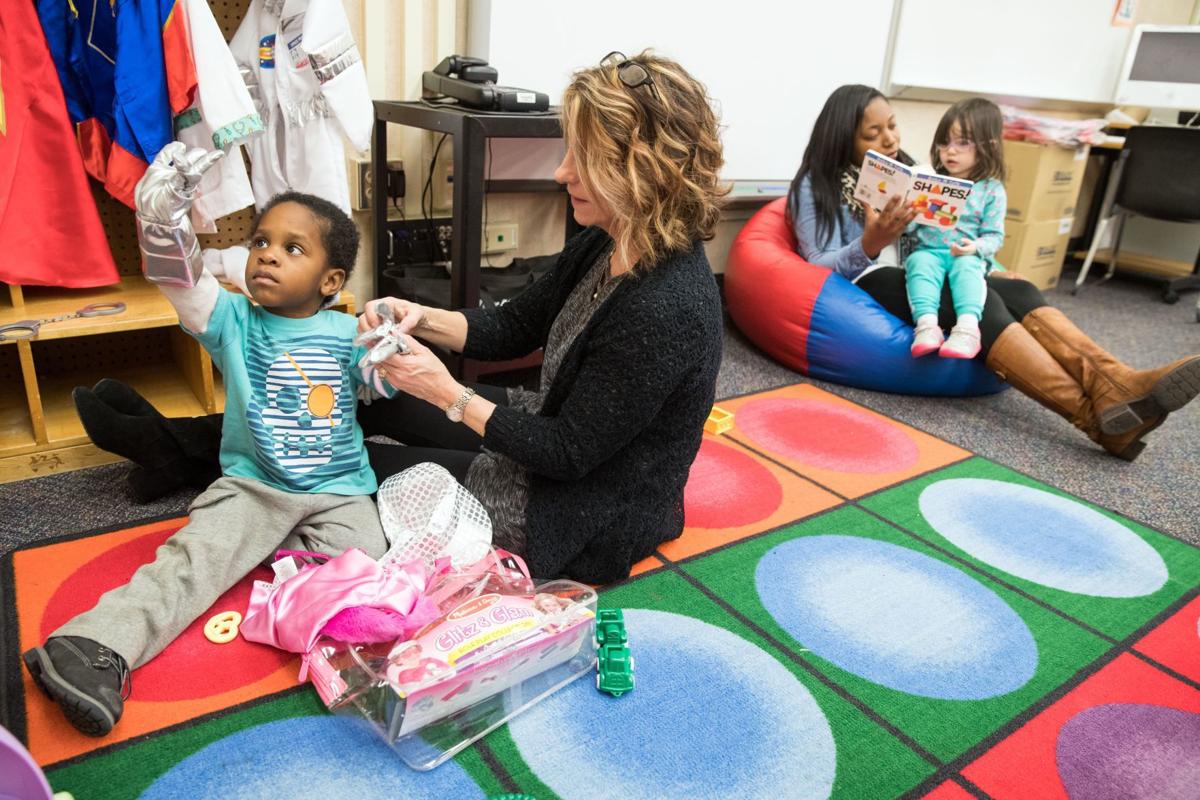 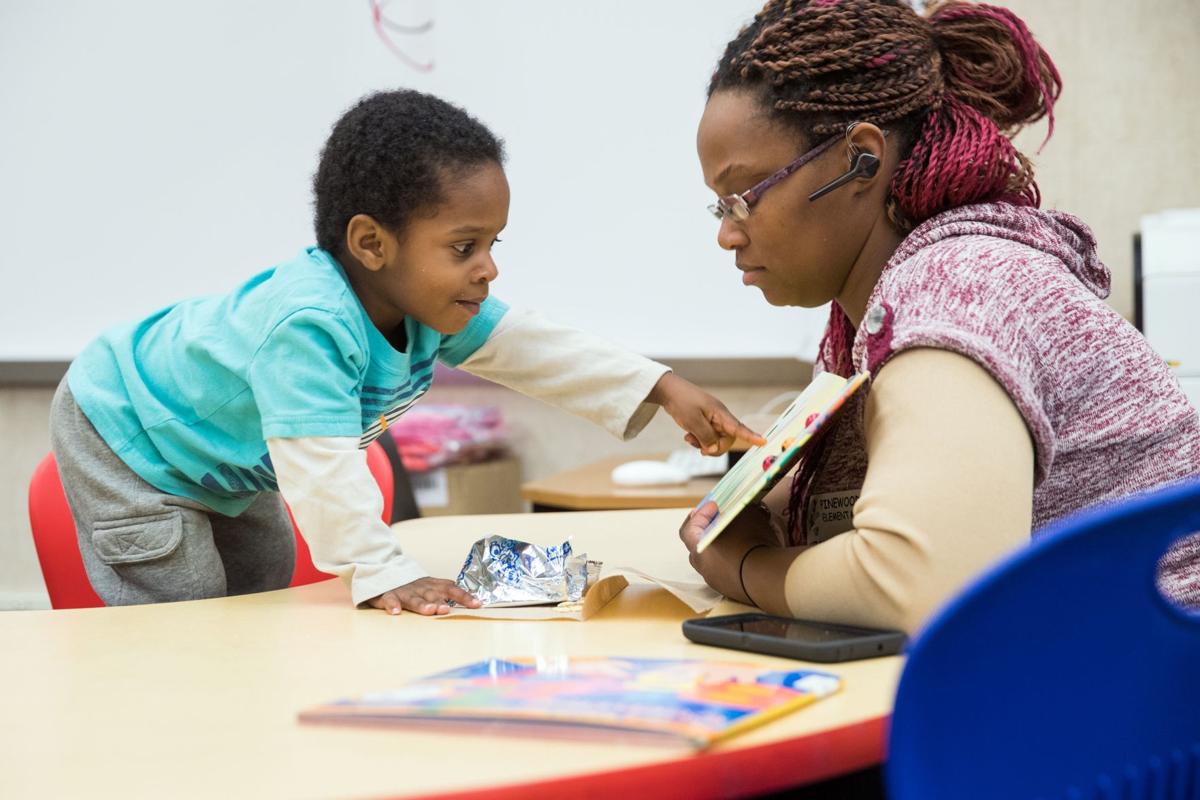 2-year-old Max Clark reads a counting book with his mother, Erin Clark, during a "Drop in and Play" session at Pinewood Elementary School, which takes part in the Learning Community's early childhood education program. 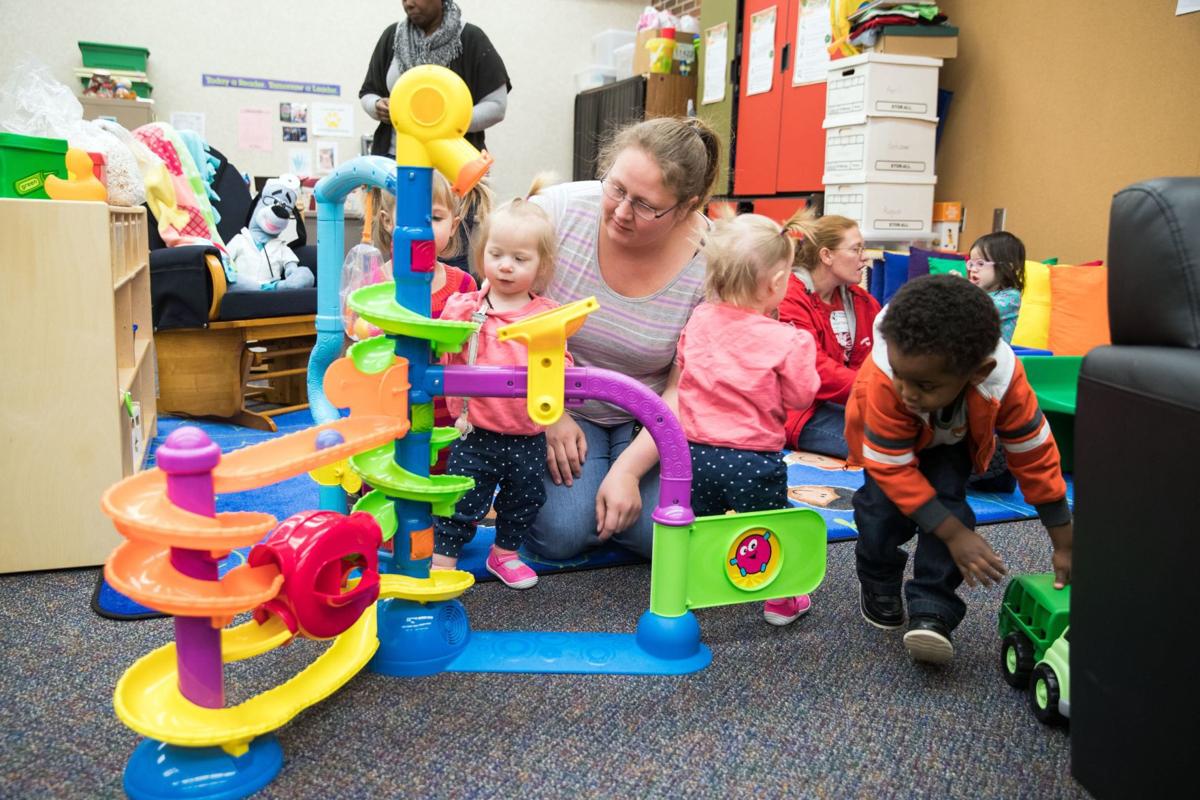 His mother, Erin Clark, said Max used to be known as “the cute baby in the car seat,” who she hauled there with his older siblings, Makiela and Marcus.

Lately, his mother said, he’s been attending “Drop in and Play” days at Pinewood, and it seems like all the staff and teachers at the school know his name.

“He’s kind of a big man on campus, and he isn’t even in school yet,” Erin Clark said.

Max’s growing connection with the Omaha public school is no accident. It’s part of a plan to improve academic achievement for him and other young children like him.

Staff and teachers at Pinewood, where three out of four children qualify for free or reduced-price school lunches, have embraced a new philosophy of family engagement, Principal Kristi Reinsch said.

They were spurred on by an early childhood education plan that metro-area school superintendents launched in 2015 in collaboration with the Learning Community of Douglas and Sarpy Counties and the Buffett Early Childhood Institute.

Aimed at reducing income- and race-based academic achievement gaps, the plan focuses on developing the cognitive and social skills of disadvantaged children, particularly infants and toddlers but also those in early elementary grades. Key elements include home visits for children birth to age 3, high-quality preschool for 3- and 4-year-olds, and best teaching practices in the lower elementary grades.

It also involves making schools more welcoming for families. At Pinewood, 63rd Street and Sorensen Parkway in Omaha, that meant opening up a drop-in room called the “Panther Den,” a combination lounge, meeting place and playroom that Max and his mom visit regularly.

“We thought we were doing a good job with family engagement activities,” Reinsch said. “But I can tell you that we have improved so much with that increased focus. No more is it thinking ‘Oh, that’s a future Pinewood Panther’ when they come through the door. That’s a Pinewood Panther now.”

In addition to several Omaha educators testifying to the power of this new approach, a report issued by the Buffett Early Childhood Institute provides some evidence that children served by the effort are making academic gains.

Sam Meisels, the institute’s executive director, said that although it’s still early, signs are promising for the nearly 4,000 children in the program.

The plan was developed by superintendents of the 11 school districts in the Learning Community in collaboration with Meisels and the institute at the University of Nebraska.

Twelve public schools in six Omaha-area districts participate in the most intensive level of the plan, financed by a half-cent property tax levy, which raises about $2.9 million a year. Other schools and community-based caregivers can receive assistance and training.

A core principle is that schools should serve as hubs connecting young children and families to education and services.

Sample groups of preschoolers were tested for vocabulary and academic gains over a year’s time.

The tests showed improvement. On the Peabody Picture Vocabulary Test, which measures how many words kids know, the number of students scoring in the bottom 20th percentile decreased by 16 percent. On the Kaufman Test of Educational Achievement, 6 percent moved up and out of that lowest category.

The tests are adjusted for age, so the gains reflect more than just the fact that the kids are a year older, Meisels said.

It’s significant, he said, that some kids in the lowest-achieving group gained enough to move out of that group.

In kindergarten and first grade, meantime, children made small gains in language skills, the report says.

“In general,” the report says, “the largest gains were made by minority children and those whose home language was other than English.”

The only exception, the report said, was slightly smaller gains by children eligible for free or reduced-price school lunch compared to their paid-lunch peers.

Beyond gauging academic gains, the researchers also looked at quality of the programs.

They reported that the quality of teacher-child interactions increased, families experienced high levels of support and schools focused more on family partnerships.

Administrators and staff increasingly view the school as a place for the whole family, the evaluators said.

“It’s been a system change for us, of really thinking about our students at D.C. West coming to us as babies,” Superintendent Melissa Poloncic said. “And how we are inclusive of infants and toddlers, wrapping them into what we’re doing in school.”

By communicating with families early on, schools are more likely to learn of issues that could hinder a child’s success.

Poloncic said her district has seen an increase in birth-to-3 special education, a direct result of the Buffett plan.

Educators in her district are also thinking harder about equity, for example making sure that preschool fees don’t deter low-income families from participating, she said. The district introduced a sliding fee scale this year based on family income.

Millard Superintendent Jim Sutfin said the Buffett Institute has helped advance the idea of the school as a hub and puts an emphasis on best practices.

That’s important, he said, because his district wants kids to read on grade level by third grade. Fourth-grade reading gets more complex and requires greater comprehension, he said.

Reinsch said the changes at Pinewood have been big and small.

The school already offered preschool, but staff and teachers have gotten better at getting to know the families, she said.

A by-product of getting to know families is that more parents are stepping forward to offer their help, she said. Through a more deliberate effort to engage parents, they’ve enlisted them to share their knowledge with kids, be they barbers, dental workers or experts on African-American studies.

The new way of thinking has brought a restroom change at Pinewood.

“I know that there are more elementary schools that have changing tables in their restrooms now,” she said. “Mine being one of them.”

Max should have a smooth transition to preschool, his mother said.

During “Drop in and Play” sessions in the den, Max is getting the feel of school, getting comfortable with routines like hanging up his coat and backpack, and learning to socialize with other kids.

He can read books with Mom or staff members, have a snack and play with a treasure trove of toys.

“It’s helping him get into a routine and a habit,” Erin Clark said.

Holland Children’s Institute: More can be done for children’s programs

The State of Nebraska spends less than 7 percent of its general fund on children’s health and early learning, according to a report released this week by the Holland Children’s Institute, an organization that advocates for public policies to benefit working families and their children.

The annual investment income from the permanently endowed fund will go toward a public outreach effort by the institute to inform the public of the institute’s mission and gain additional money to improve child care and early childhood education, especially for low-income kids.

Researchers revealed a report Tuesday showcasing Nebraskans’ attitudes toward the care and education of young children at “Parenting Matters: A National Symposium.” The event centered on strategies to support parents of young children.

The panel, which meets in Lincoln for the first time Wednesday, was set up by the Buffett Early Childhood Institute, a fairly new enterprise overseen by the University of Nebraska system.

Five apply for vacant seat on Millard School Board

Board members voted Monday night to formally accept the five applications, the first step toward appointing a new member.

Rich Brabec specifically took issue with state officials referring to Schuyler Central as a “demographically shifting” community, which he said was perceived in the community as a racially motivated label against immigrants.

During testing, the computer will adjust the difficulty based on a student’s answers. Get the answer right, and the test gets harder. Answer wrong, and the test questions get easier.

The Buffett Early Childhood Institute turned five years old this year. In those five years, the institute has taken its wildly audacious founding goal — let's make Nebraska the best place in the country to be a baby — and started to turn that audacity into reality.

The revolving door and inconsistent care can have “devastating” effects on children during their formative years, the institute's Susan Sarver said.

Hansen: It's time for me to say farewell to piecing together stories about the state we love

World-Herald readers were motivation to keep finding new stories and provided more than a few of the column ideas that had a big impact.

2-year-old Angelina Mai played dress-up at Pinewood, and her outfit caught the attention of Mary Beth Pistillo of the Buffett Early Childhood Institute.

Pinewood Elementary staffer Tierra Stennis reads a counting book to Max Clark, 2, during a “Drop in and Play” session at the school. Max’s mom, Erin Clark, is at right.

Cindy Wheeler, left, attended a recent “Drop in and Play” at Pinewood Elementary with her three daughters, Addison, 4, Kenzee, 1, and Madalynn, 1. The girls got some reading time in with Pinewood Principal Kristi Reinsch.

2-year-old Max Clark reads a counting book with his mother, Erin Clark, during a "Drop in and Play" session at Pinewood Elementary School, which takes part in the Learning Community's early childhood education program.