PALMYRA, Neb. — The mother of the high school student was venting big time.

Her daughter, a student at Palmyra High School, needed to finish an online assignment on her school-issued laptop.

But their rural home lacked access to high-speed Internet that would allow that.

So they drove into town and were sitting in a car, parked outside the public library in Syracuse to use the Wi-Fi signal from the then-closed facility. “How crazy is this?” she texted to a Palmyra school official.

That’s not uncommon, according to Burke Brown, the tech coordinator at Palmyra, a bedroom community about 20 miles southeast of Lincoln.

Brown recently relayed the story to a legislative committee, saying it was an example of the “digital inequality” that exists between Nebraska’s urban areas, which have adequate broadband service, and many rural areas such as Palmyra that do not.

It’s creating a “homework gap” in the state, according to a recent task force that looked at the availability of high-speed broadband Internet service in the state.

“We have teachers not assigning homework because they know that 20% of their students can’t get it done,” Brown said. “So many of our households don’t have broadband fast enough to do homework.”

The problem is being exacerbated, he told lawmakers, because more and more schools like Palmyra are issuing students Chromebooks and other laptops on which to do homework.

The report of the Rural Broadband Task Force estimated that 37% of rural Nebraskans lack access to high-speed broadband service of 25 megabits per second or faster via fiber or other fixed lines. (Download speeds of 25Mbps or faster — fast enough to download movies and other large data files — are what the Federal Communications Commission defines as “high-speed Internet.”) 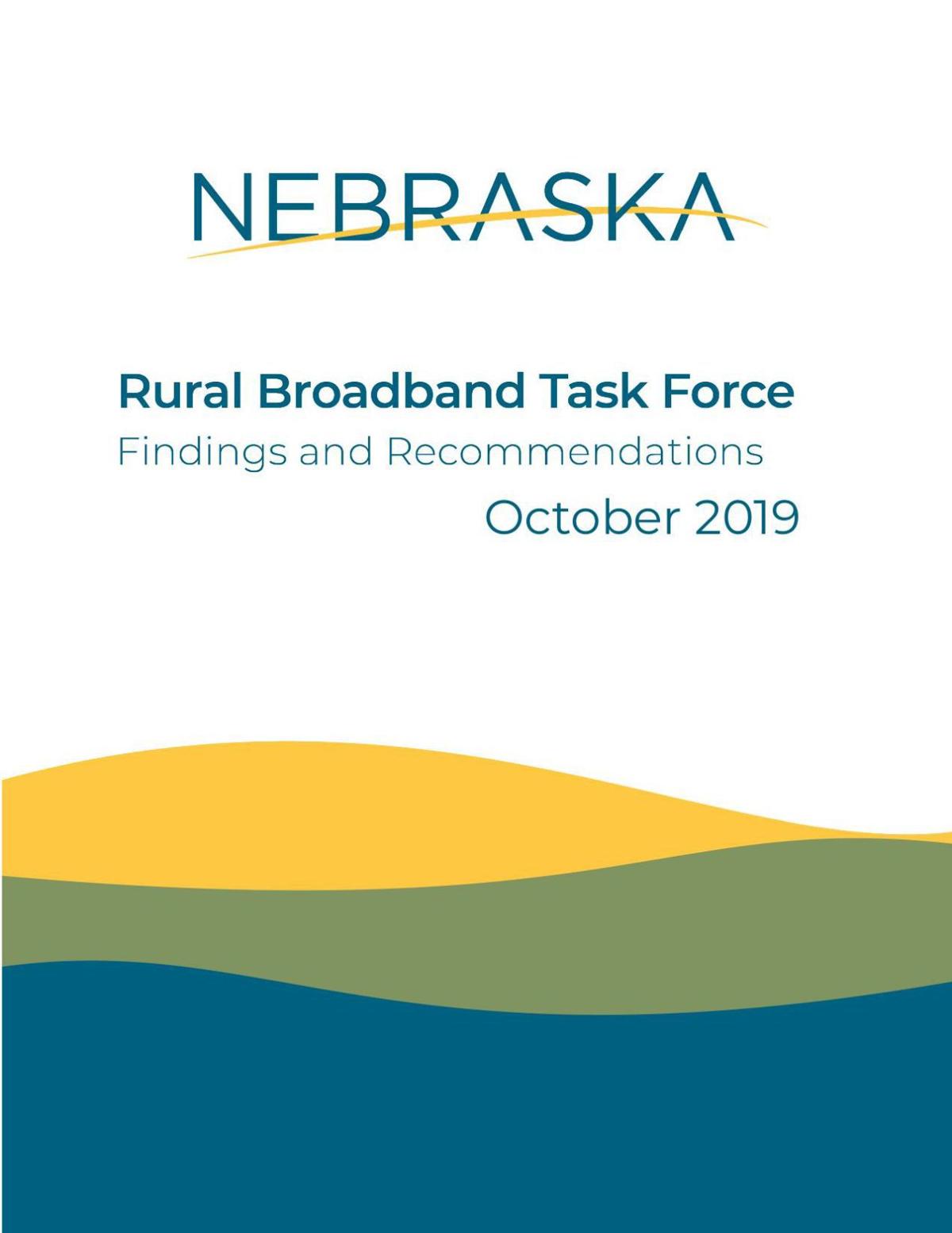 Parking outside the local library isn’t a solution in many small towns, the report said. That’s because 84% of public libraries in towns with a population of less than 2,500 lacked public Internet that was 25Mbps or faster. Just over two-thirds of those libraries had download speeds of less than 13Mbps.

During a Dec. 4 hearing of the Legislature’s Transportation and Telecommunications Committee, lawmakers were told that unless broadband services are expanded into more rural areas, students, entrepreneurs and farmers who rely on high-speed service to learn or operate businesses and high-tech machines will be left behind.

Bostelman used his own rural neighborhood as an example. His wife has an engineering business that requires broadband, and his neighbors — who include a doctor and an insurance agent — need it, too. But his local telephone provider keeps telling him that expanding fast Internet service to his area is cost-prohibitive because there are so few potential customers.

“We’re leaving people behind because it’s a business decision,” the senator said.

A spokesman for Windstream, which provides service to Bostelman’s area, said during the Dec. 4 hearing that a recent improvement in technology will allow broadband to be expanded to the senator’s neighborhood next year.

“We have customers who cut down trees because they’re starving for broadband Internet,” Fellers said.

But he and other representatives of Internet providers said there needs to be a subsidy to meet the “business case” to expand services into rural areas. They likened it to the Rural Electrification Act, a 1935 law that brought electricity to rural farms and ranches.

The Rural Broadband Task Force made several recommendations in its 31-page report to expand broadband and address the homework gap:

The bidding would start at a minimum established by the PSC, with the company submitting the lowest bid — the reverse of a regular auction — winning the rights to provide Internet to a particular rural area. State universal service fees — fees charged on phone bills — would be used to subsidize the work.

Earlier this year, the PSC took steps to stabilize the Universal Service Fund, which had been declining in recent years in part because fewer and fewer people use landline phones. From 2013 to 2018, the fund’s annual revenue declined from $52 million to $33 million. The change ordered by the PSC is projected to stabilize revenue at between $46 million and $54 million, making more money available for broadband expansion efforts.

Lola Seitz of the Pawnee City Public Library said her facility has obtained E-Rate grants for the past decade, which has reduced the cost of Internet service by $180 a month. The library now has broadband with download speeds of 100Mbps. The library’s 11 public computers are heavily used, and students regularly come to the facility after school to complete their homework, Seitz said.

“Our library could be a model for what all rural public libraries in Nebraska could become,” she said.

Other ideas to bridge the homework gap included establishing Wi-Fi “hot spots” on school buses to allow students to do homework there.

In Palmyra, population 545, the one-room public library is open three days a week and has a single, part-time librarian, which is not unusual for towns its size. But the community, unlike more remote rural towns, is growing. The new high school football field, still under construction, has artificial turf, a fancy playground for kids and lights that tower over the nearby cornfields and Nebraska Highway 2.

Many of Palmyra’s new residents came from Lincoln and other larger communities where there are multiple high-speed Internet providers.

Katie McMullen, who lives near Douglas, Nebraska, said she was shocked at how slow the Internet service was and how few options there were, after moving there from Lincoln to take care of elderly relatives.

She said she sometimes has to shut off other computers and even a household printer so that a movie can be downloaded at home. For really big files, McMullen said she and her husband will drive to Casey’s in Palmyra to use the faster Wi-Fi there.

“It’s horrible,” she said of the available service. “Oh my gosh.”

The top 10 decreases in average personal income in the country, ranging from 21% in Banner County to 36% in Sioux County, were in Nebraska in the years from 2016 to 2018.

Fourteen nursing homes — all but one in rural counties — have closed in Nebraska this year, more than twice the number in 2018, which itself set a record. The trend worries nursing home associations and advocacy groups alike.

National and state dental leaders say Medicaid audits in Nebraska threaten the care of children with severe dental disease. The leaders say the audits do not follow the treatment guidelines for the profession.

Speaker proposes expanding Nebraska Legislature to up to 55 senators

State Sen. Jim Scheer of Norfolk, the speaker of the Nebraska Legislature, is proposing that the state's unique, one-house body, after five decades of having 49 state senators, should be allowed to grow.

At least 780 inmates of the 1,400 housed at the State Penitentiary complained in a petition about the loss of social clubs and evening recreational activities, inadequate "sack" breakfasts, loss of post-work showers by shop employees, and other decisions they called "arbitrary and capricious" made as part of recently switching the facility to 12-hour shifts for workers.

Mike Galeski, a 21-year-old sustainability major, is working to raise $50,000 on behalf of Pencils of Promise, a nonprofit that builds schools and increases access to education in Ghana, Guatemala, Laos and Nicaragua.

The recently opened office is not listed on the State Treasurer's website. There has been no press release about it. There's not even a mention of the office on the list of tenants by the building's elevator.

Nebraska Gov. Pete Ricketts said Monday that State Treasurer John Murante should have been more mindful about the public perception of setting up an outreach office in Omaha without notice to the public and also of contracting with a former employer for public service advertisements.

Nebraska and Iowa may not have mountains or beaches, but we sure have nice people.

Sightings of squadrons of large drones, with 6-foot wingspans and flying in formations of six to 10, were first reported in northeast Colorado in mid-December. The drones are described as much larger than "hobby" drones.

'Lives are at risk': 74 phone outages in Nebraska in 2019 spark call for investigation

The outages, which occurred between Jan. 1 and Dec. 16, were caused by a range of problems, including, in one reported case, gopher damage. Spring flooding was the cause in a number of cases, but the most common cause was accidentally cut cables, according to the outage records.