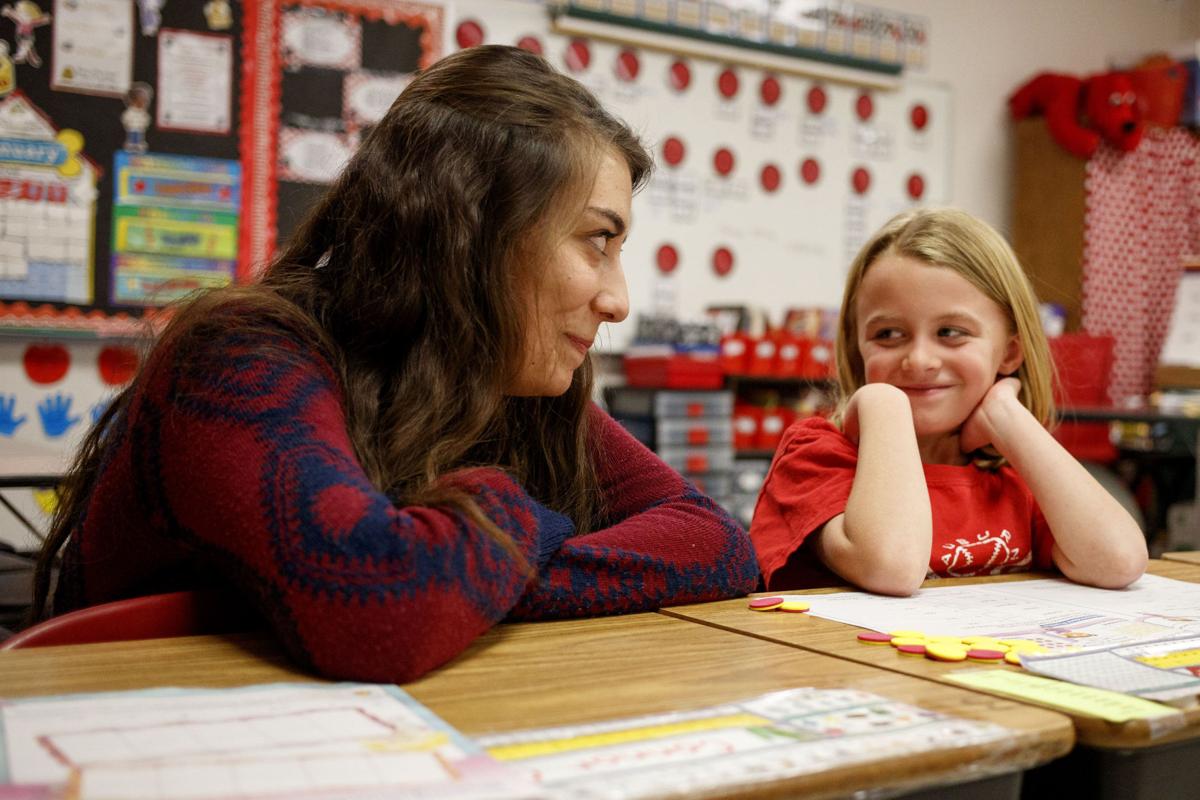 Kaitlyn Tennant, left, came from Colorado to Peru State, which offers “One Rate, Any State” tuition. Tennant is a student teacher in Auburn, to first-grader Milana Eberly. 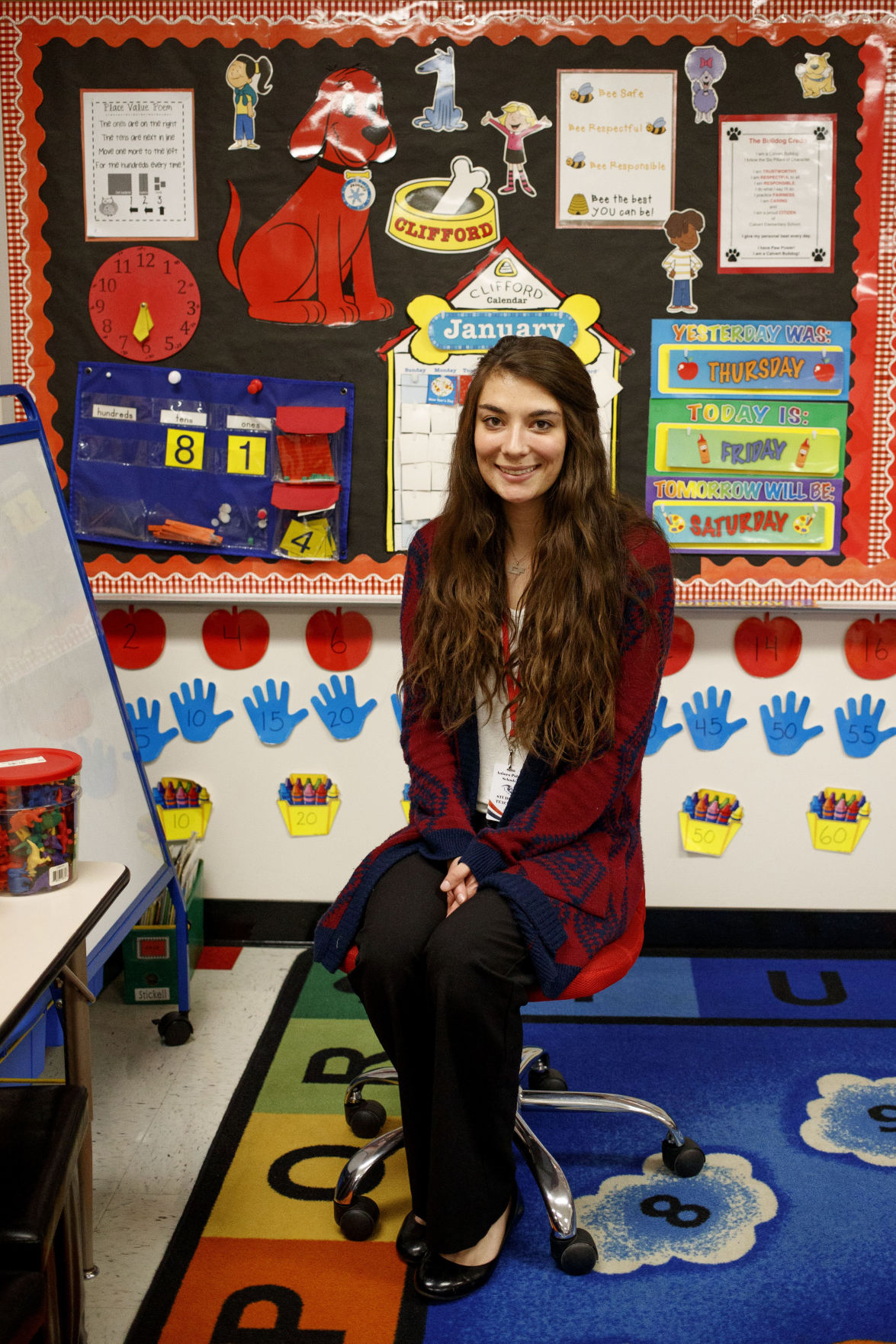 Kaitlyn Tennant said coming to Peru State has been a great choice for her and her twin. She will graduate in May and might stay in Nebraska.

The University of Nebraska at Kearney will do the same next school year for Coloradans and Kansans.

Picking off students from neighboring states may become vital to universities as they strive to fill classrooms, balance budgets and expand programs. And for the short term, at least, the pool of new high school graduates won’t grow a great deal.

“This certainly is a trend,” said Thomas Harnisch of the American Association of State Colleges and Universities. Enrollment “will be a challenge with the confluence of stagnant or declining state funding and population decline. This is not an issue that is expected to go away anytime soon.”

Kaitlyn Tennant of Thornton, Colorado, didn’t expect much from Peru State College when she and twin sister Josephine visited campus four years ago. It was Nebraska, they thought, surely just boring prairie.

But driving onto campus, they fell for the hills, woods and old buildings. This was a place they could make home, and they did.

An added benefit was Peru State’s “One Rate, Any State” tuition plan, which is exactly what it says — out-of-staters pay in-state tuition.

“We love Peru. It’s been a great place for us,” said Kaitlyn, who will graduate in May. She’s doing her student teaching at Calvert Elementary School in nearby Auburn, Nebraska.

Peru State has had the One Rate, Any State tuition program since 2009.

A regional program called the Midwest Student Exchange Program for close to 25 years has promoted nonresident tuition of no more than 150 percent of resident tuition among participating public colleges in 10 states. Many Nebraska institutions participate.

But some schools are beginning to give deeper discounts — resident tuition — to all out-of-state students who simply meet admission requirements. UNK will do so in the fall for Coloradans and Kansans.

Ed Scantling, UNK’s associate vice chancellor for enrollment management, said student recruitment from Colorado and Kansas has dropped considerably since 2012. In the fall of 2012, for instance, UNK had 144 undergraduate students from Colorado. Last fall it had 69.

Because enrollment is vital to a university’s budget, NU President Hank Bounds “encouraged us to be bold and to look at doing things in an innovative way,” Scantling said.

“We felt we have to reach a little further to find kids,” Scantling said. “Early indications, particularly from Colorado, are really good.” Visits from Colorado high school students are way up, and applications from Coloradans are up about 20 percent, he said.

The UNK football team likes the plan, too, because walk-ons from Colorado and Kansas are lured by lower tuition.

At UNK this school year, nonresident undergraduate tuition is about $418 per credit hour and resident tuition about $192 per credit hour. So a full load of 30 credit hours over two semesters would cost a nonresident $6,780 more than a resident, and that would be the annual savings for Kansans and Coloradans.

Tuition and fees, of course, are only one factor in the cost of attendance. The University of South Dakota’s room and board rates in many cases are $2,500 less than UNL’s per year.

“We have a lot of new buildings,” he said of UNL’s residence halls. “It makes a big difference when you invest into your facilities and comfort.”

Michael Rush, executive director of the South Dakota Board of Regents, said his schools could add students without additional instructors or buildings.

“South Dakota has some excess capacity in its higher education system,” he said.

The strategy is more common now, but it isn’t universal. UNL is among many institutions that haven’t dropped nonresident tuition to resident levels.

UNL would rather recruit out-of-state students with scholarship packages, attracting students who will be prepared, lend geographic diversity to UNL and graduate on time, she said.

“We try to look at each student individually and look beyond the numbers,” she said.

Iowa doesn’t participate in the Midwest Student Exchange Program. But the University of Nebraska at Omaha since 2008 has offered Iowans from three western Iowa counties (and eight more counties since 2012) 150 percent of resident tuition.

Chadron State offers the Eagle Rate to non-Nebraskans, which is in-state tuition plus $1 per credit hour.

On the other hand, students who go to school away from their home state are more likely to remain in the state where they attend college and contribute to the workforce there.

Peru State’s Kaitlyn Tennant said coming to Nebraska was an excellent decision for her and her sister.

They matter here, she said. She runs cross country and is on the campus activities board. Josephine runs Love Your Melon, a program that provides stocking caps to children with cancer.

For the twin sisters, going small meant big opportunities. They might stick around.

» The University of Nebraska at Kearney is offering in-state tuition to Coloradans and Kansans next school year.

» Peru State has a “One Rate, Any State” tuition program, in which out-of-staters pay in-state tuition.

» The University of Nebraska at Omaha offers students from 11 western Iowa counties 150 percent of resident tuition.

The impact of Biden's infrastructure bill

The university described this as a pilot program that has been formally approved by the South Dakota Board of Regents.

Room and board going up across NU system, but regents applaud administrators for keeping rates comparatively low

The University of Nebraska Board of Regents unanimously approved room and board rate increases Tuesday for 2018-19 throughout the NU system.

Creighton University has announced the appointment of its first vice provost for institutional diversity and inclusion.

Kaitlyn Tennant, left, came from Colorado to Peru State, which offers “One Rate, Any State” tuition. Tennant is a student teacher in Auburn, to first-grader Milana Eberly.

Kaitlyn Tennant said coming to Peru State has been a great choice for her and her twin. She will graduate in May and might stay in Nebraska.