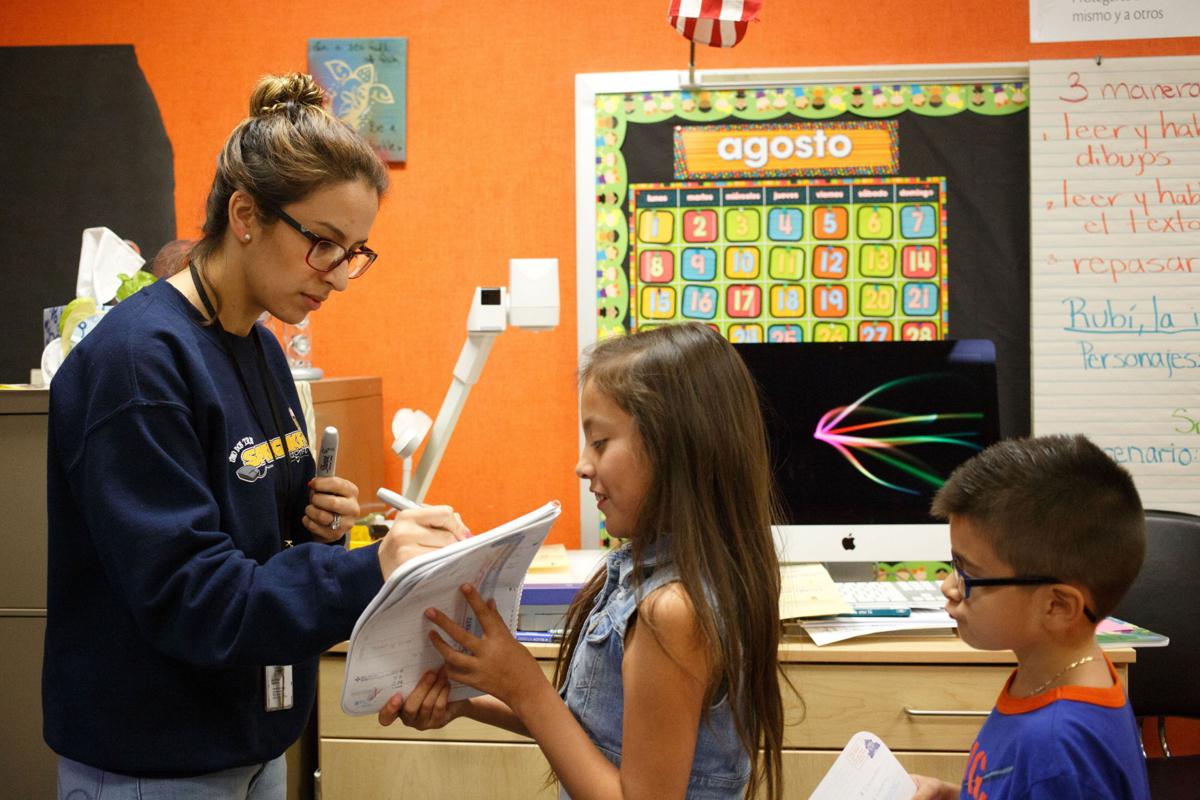 Laura Magaña, left, went from being a student in the Omaha Public Schools’ dual-language program to teaching in it. The first-year teacher said her background helps her relate to students, like third-graders Jaslene Dominguez Lara and Sergio Mora Lopez, as well as Spanish-speaking parents. 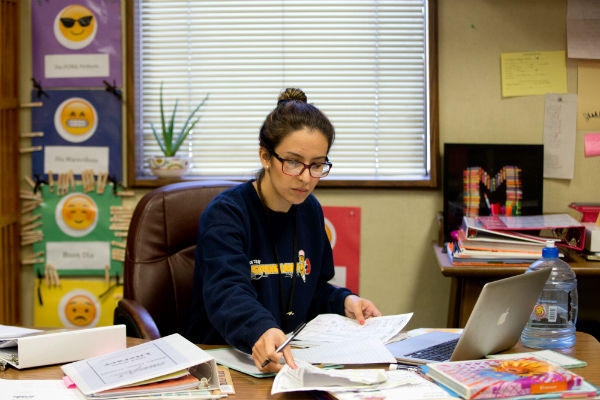 “Language is one thing, but culture is another,” Magaña says. “And having the same language and culture as the kids helps you relate.” 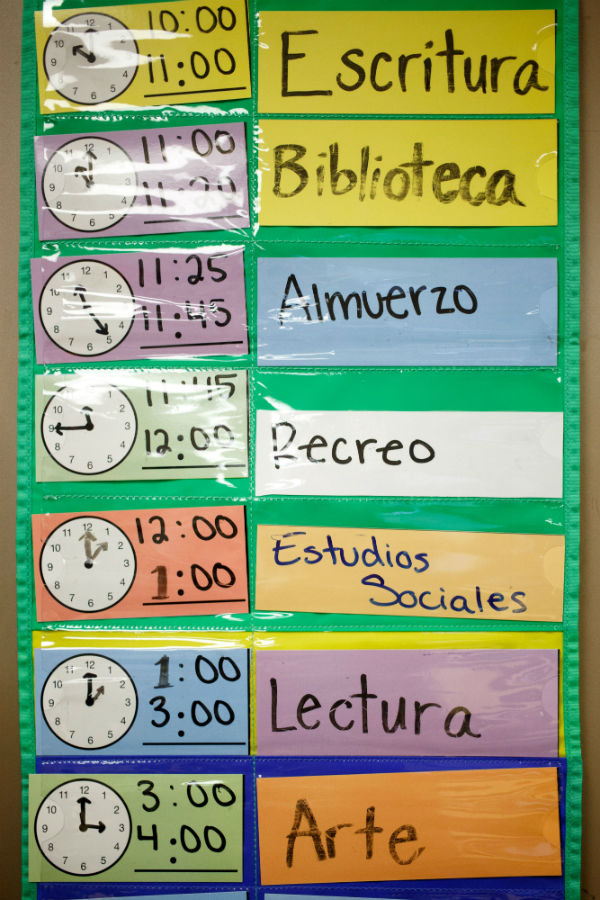 She also understands the cultural references that her chatty third-grade students sprinkle into their science and social studies lessons. The quinceañera that one student’s sister is celebrating. The homemade tamales that are a Christmas tradition in the homes of many Mexican families.

The woman called Maestra Magaña by her students once attended Spring Lake Magnet, too, arriving at the school as a second-grader. She’s Latino, like many of her students, and grew up in a Mexican home in South Omaha where Spanish was spoken.

“Language is one thing, but culture is another,” Magaña said. “And having the same language and culture as the kids helps you relate.”

Magaña, 23, is a teacher in the Omaha Public Schools’ dual-language program, where students learn lessons in both English and Spanish.

Started in 2000, OPS has the longest-running dual-language program in the state and is the only district in the Omaha area to offer the program.

The Fremont and Lexington school districts also have dual-language programs. Like OPS, they have higher-than-average numbers of students who are learning English for the first time, known as English Language Learners. The idea is being discussed by the Omaha Archdiocese as a possibility for its Catholic schools, where the enrollment of Spanish-speaking students is growing.

OPS’s dual-language program operates within 10 schools and enrolls about 2,800 students in grades K through 12. Some are native Spanish speakers who are learning English for the first time. Others might not know much Spanish when they start but have parents pushing them to be bilingual and biliterate, where they can read and write in two languages.

Magaña herself was a student in OPS’s dual-language program. She went to Marrs Middle School and graduated from Omaha South High.

Now she’s a dual-language teacher, instructing her students during the Spanish-speaking portion of their day.

“I love the fact that I can speak with them in Spanish and joke around a little, and they can still get it,” she said.

OPS data comparisons have found that dual-language students typically do as well as or better than their peers on state tests.

But it’s not so easily replicated — districts may not have the staff, Spanish-support or Spanish-speaking student population to start their own dual-language programs. Some parents worry that kids will have trouble mastering science or social studies in two languages, and there’s extra cost to schools who have to hire more staff and buy materials in both English and Spanish.

Many districts opt instead to provide other English as a Second Language services to help students improve their English skills, whether they speak Spanish, Karen or Vietnamese.

Fremont’s dual-language program, now in its second year, grew out of a desire to narrow the achievement gap for English Language Learners. The district has committed to a five-year pilot at one elementary school, where about 40 kids in kindergarten and first grade split the day between English and Spanish instruction. Each year, another grade level will be added.

Catholic schools in the Omaha Archdiocese are starting to research whether dual-language programs would work in some schools with higher populations of Spanish-speaking students. They’re also hearing from young parents who want their English-speaking children to grow up bilingual.

“The whole notion of dual-language is a very active conversation in our office right now,” Archdiocese Superintendent Patrick Slattery said. “We know it’s something our families want, and we’re doing our homework now.”

Magaña is one of three OPS graduates who went through the dual-language program themselves and have returned to the district to teach in the same program. The program employs about 130 teachers.

“We now have three of our babies, if you will, who have come back to us,” said Katy Cattlett, OPS’s supervisor of dual language and world languages.

In the past, OPS has sometimes had trouble recruiting enough Spanish-speaking teachers, Cattlett said, requiring the district to bring in visiting teachers.

Now, the program is starting to see some success with homegrown Nebraskan teachers.

“We’re starting to see people in the community and beyond know that we have this opportunity here,” Cattlett said. “They’re coming to us.”

Magaña never thought she’d end up a teacher. But she felt an obligation to return and work in her South Omaha community.

She attended Creighton University as a Gates Millennium Scholar. The prestigious scholarship, funded by the Bill & Melinda Gates Foundation, essentially promises recipients a full ride — tuition, room and board, books and travel — to the college of their choice. Even some graduate-level programs are covered.

Magaña initially started on a pre-med track. As a Gates Scholar and first-generation college student, she felt pressure to pursue a career with some renown and the promise of a bigger paycheck — law, medicine, engineering. Teachers don’t always get the respect they deserve, she said.

So she flirted with majors in pre-med, exercise science and education. Eventually, teaching stuck, and she graduated in May with a degree in elementary education.

“My goal was to give back to my community,” she said. “And I guess that’s what I’m doing.”

It’s important for students to have teachers who look like them, who grew up in the same neighborhoods and can function as role models, she said.

In 2014-15, one-third of OPS students were Hispanic. According to state figures, in that same year, less than 4 percent of OPS teachers were Hispanic.

Magaña displays her Creighton degree in her classroom and decorated tables with the names and logos of distinguished colleges, such as Princeton, Yale and Stanford, to inspire her students.

Their parents seem to appreciate dealing with a teacher who understands Latino culture and speaks Spanish, she said.

“A lot do speak English,” she said. “Some don’t. But they feel more connected when they can ask the teacher directly instead of through an interpreter.”

Goal is to have an even split in dual-language programs

Most ESL programs aim to get English Language Learners quickly up to speed in English, whether they speak Spanish, Arabic or Karen.

Students learning English could be pulled out of class to meet with a specially trained ESL teacher, or learn content-based English, where they pick up on the language through math or English classes.

For most dual-language classes, the goal is to have an even mix: half of students speak primarily Spanish, half speak primarily English. In some OPS schools, space restrictions limit the number of native-English speakers to a smaller percentage. Other schools, such as Crestridge Magnet and Liberty Elementary, have a more even split.

In 2014-15, 6.2 percent of Nebraska students were classified as English Language Learners. In OPS, that number was 15.5 percent. More than one-third of Lexington students were learning English that year.

In Iowa, about 7.4 percent of Council Bluffs students were ELLs.

Other districts in the metro area have much smaller ELL populations: in 2014-15, less than 1 percent of Elkhorn students and less than 2 percent of Millard students. That could make it harder to offer specialized programs like dual-language.

A field of ice blocks on Mars was captured on camera

A field of ice blocks on Mars was captured on camera

Biden arrives in Geneva ahead of Putin meeting

Biden arrives in Geneva ahead of Putin meeting

Counselors were on hand at Spring Lake Magnet Center on Monday to help students and staff cope with the unexpected death of third-grade teacher Laura Magaña.

Laura Magaña, left, went from being a student in the Omaha Public Schools’ dual-language program to teaching in it. The first-year teacher said her background helps her relate to students, like third-graders Jaslene Dominguez Lara and Sergio Mora Lopez, as well as Spanish-speaking parents.

“Language is one thing, but culture is another,” Magaña says. “And having the same language and culture as the kids helps you relate.”