The masks were tolerable and the social distancing effective, several students at Papillion-La Vista High School said Wednesday as the district welcomed the majority back.

Five students leaving school said they felt safe returning to their building after a five-month absence.

“I really appreciated the staff and everybody coming back to try to make this work,” said sophomore Nathan Mundt.

The district has drawn criticism from its teachers union for returning all but a fraction of students to in-person learning. The reopening plan is not safe, they say. About 10% of the district’s students have opted for remote learning.

The Papillion La Vista Education Association has argued for a remote start or a 50-50 start to reduce the density of students in the buildings.

Earlier this week, Millard Public Schools Superintendent Jim Sutfin said he’s considering an alternating day plan to reduce the number of students in his district’s high schools. Current Millard plans call for all students, except those who chose a remote option, to return in unison next week.

“Honestly, I think today went really well,” Mundt said. “Everybody kept their masks on. Transitions were really smooth. Lunch, which could have been really chaotic, actually went really smoothly. Overall, I think the Papillion school district did really well today. There’s always a chance that things could go wrong, but as of today it looks like we could get through this.”

Allison Barnes, another sophomore, said the plan was “pretty effective. … I think that the staggered passing periods was a good idea.”

That reduced congestion in the hallways, Barnes said.

The lunch break was a lot different, she said.

Students had to wait in the gym, go in groups to get their food, and then return to eat it, she said.

Barnes said she felt safe in the school.

“It was really controlled with the masks and people,” she said. “Everybody was wearing a mask.”

District officials had said that maintaining social distancing in some classrooms would not be possible, so wearing masks was essential.

“They tried to spread out the desks as much as they could,” Vranes said. “They were kind of close, some of them were, but some of them were really far away. It just depended on the classroom sizes.”

So was it difficult to wear a mask all day?

“I did pretty well. It was kind of hard with my glasses,” Vranes said. “They kind of fogged up. But we had mask breaks when we could take off our masks for a few minutes.”

Barnes said that when masked up “it definitely gets warm, but everyone follows it pretty well, and you just know it’s kind of what you have to do if you want to be at school.”

Christian Flores, a sophomore, said the day went “a little slow. It was still fun to come back to school, see my friends. In my opinion, it’s definitely better than doing online school.”

Photos: Fighting measles in Nebraska, Iowa through the years

Demonstrators carried signs with messages including "Protect our community and families," "We don't feel safe with our current plan" and "Protect our babies and elders."

Superintendent Jim Sutfin, saying he's concerned that coronavirus cases are rising in west Omaha, said he could decide to have high school students attend classes in person every other day.

Will schools be able to stay open? Healthy teachers, testing could be the keys

How long schools can stay open will likely depend on one crucial factor: keeping teachers from quarantine.

Gov. Ricketts: Decision to reopen schools must rest with policymakers

Nebraska Gov. Pete Ricketts said Monday that policymakers, rather than health experts, should decide whether schools should reopen to students. "We have to look at the big picture," he said.

Even the instruments are masked; marching bands change their tune to cope with COVID-19

Nebraska band directors have been forced to change their approach as they come to grips with a fall season upended by COVID-19.

Weighing health risks, some 'heartbroken' teachers retire instead of returning to class

“I just couldn’t see a scenario where I could be physically safe,” one teacher says.

Millard high school students will attend school in their building half the time and "Zoom" into classes for the other half.

The letter sent to families by the Papillion La Vista Community Schools said cheerleaders who attended an outing for pictures and dinner on Sunday are being asked to quarantine through Aug. 23.

In the past 10 days, positive tests for COVID-19 have skyrocketed 61% among corrections officers. In just the past three days, the number of units with inmates who have the coronavirus has doubled.

Dr. Deborah Birx, who is on a tour of the Midwest, met Friday morning with Nebraska Gov. Pete Ricketts, state and local health officials and others.

When the superintendent was diagnosed with COVID-19,  the Plainview Public Schools opted to push back the start of the school year to keep students and other staff members safe.

Papillion La Vista Community Schools spokeswoman Annette Eyman said that the crowding shouldn't have happened and that it was the result of "a perfect storm."

The governor said it's vital that parents cooperate with contact tracers from local health departments who track down those whom infected people may have contacted. 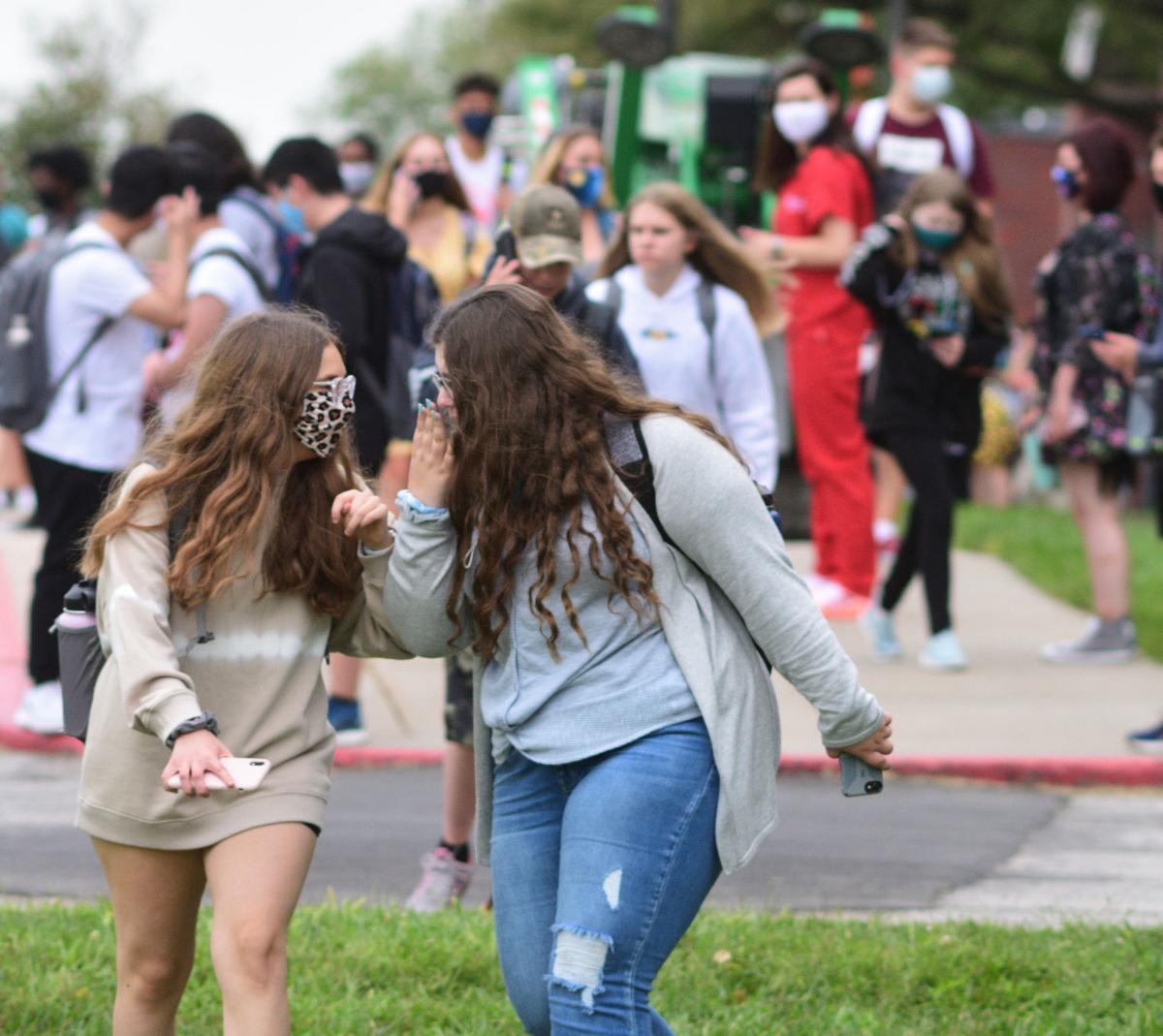 Taylor Vranes, left, and Allison Barnes leave Papillion-La Vista High School after dismissal Wednesday. The sophomores had a favorable assessment of how things went inside the school on their first day back. 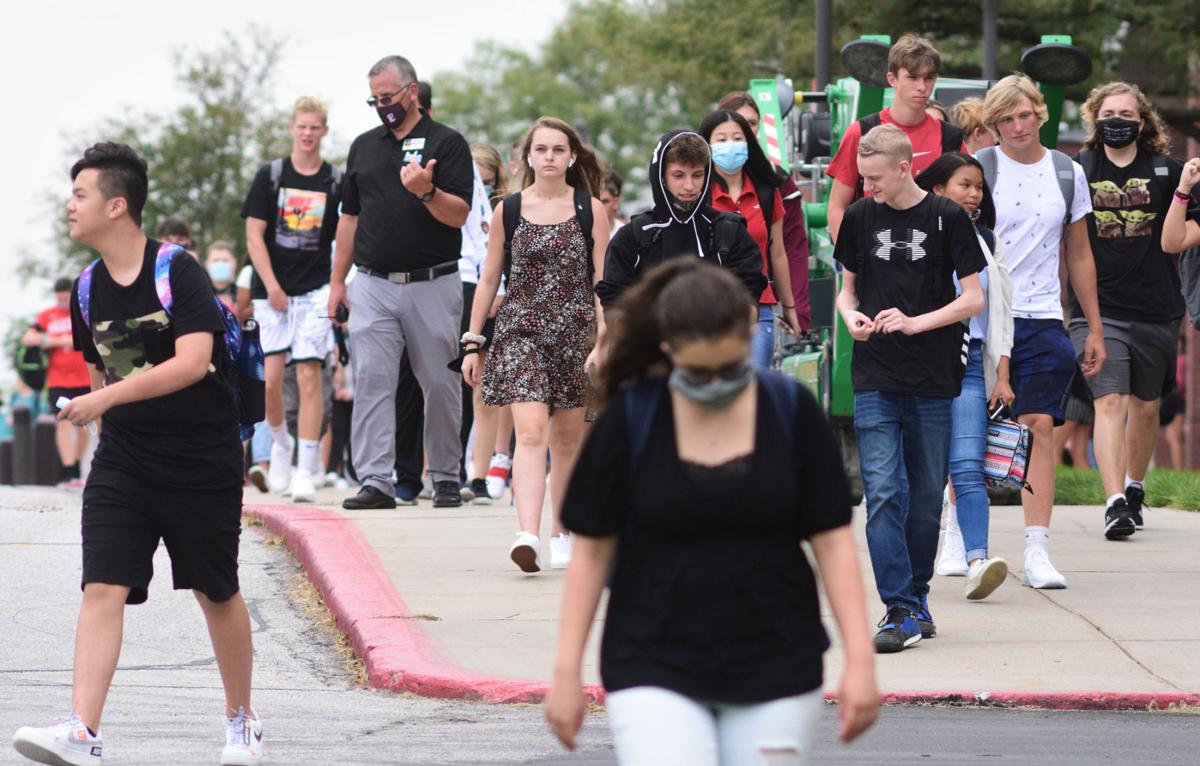 Students depart from Papillion-La Vista High School on Wednesday after all grade levels reported for in-person learning. About 10% of the district's students chose to enroll in the fully remote option.