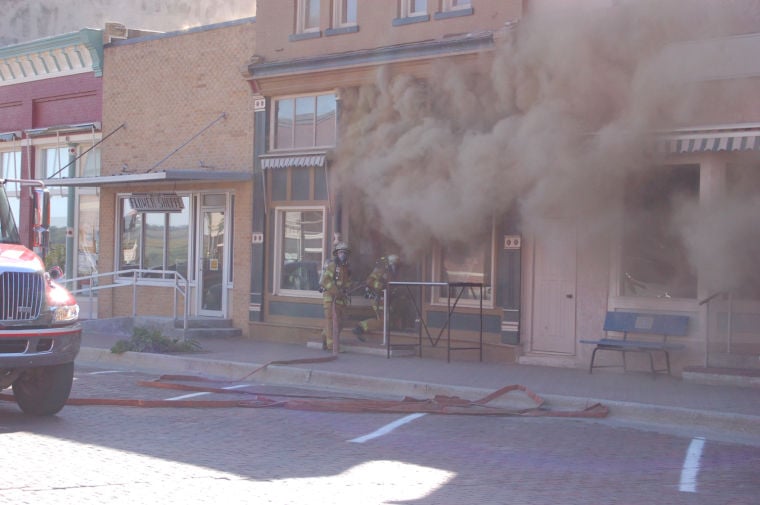 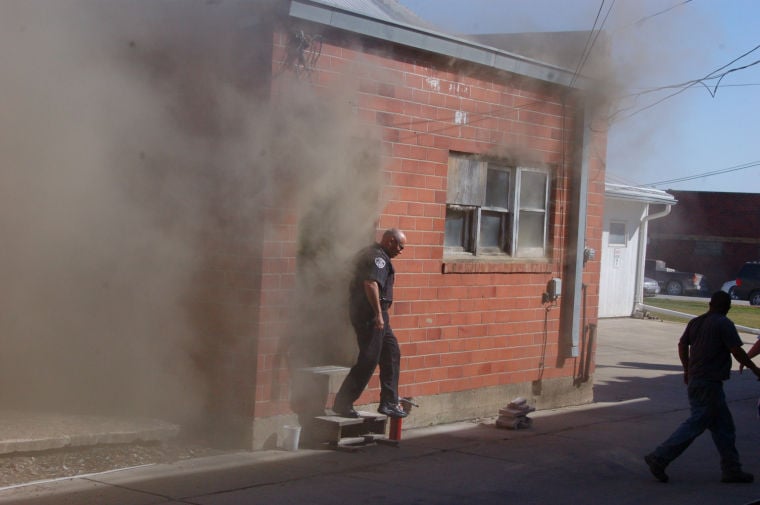 27_IAWOODBINE. cutline: Woodbine Police Chief Gary Dull exits a building after checking to make sure it was clear.

WOODBINE, Iowa — What started as a small fire Thursday in the alley behind a flower shop spread startlingly fast.

In minutes, the blaze engulfed the interior of the Everything Ellen Flower Shoppe and was threatening to reach into neighboring buildings on Walker Street in downtown Woodbine.

The first call for help came into the Woodbine Volunteer Fire Department about 3 p.m. Before it was over 2½ hours later, mutual aid calls had been sent to every fire department in Harrison County and to a few others as well.

During the ordeal, Woodbine residents showed what community spirit is all about.

In a reverse bucket brigade under clouds of noxious smoke, dozens of people worked to empty out Woodbine Antiques, Denise’s Design and Eby’s Drugs before the fire could spread.

Among those who helped were members of the high school volleyball team, who helped empty stores, then went to the school to play a match.

The Harrison County Rural Electric Co-op loaned its cherry picker trucks to firefighters, so they could combat the fire spreading across the roofs. Not until Denison’s tower truck arrived were firefighters able to corral the flames.

Damage appeared to be confined to the flower shop and the roof of the next-door Corn Palace Bar.

One injury was reported: A person who was helping move items out of Eby’s Drugs fell in the street.

Fire companies from Denison, Missouri Valley, Mondamin and Portsmouth were among those who responded.

No information was available Thursday night on the cause of the fire or extent of the damage.

Five people from Nebraska —Gretna and Elkhorn — were seriously injured Tuesday when a boat exploded near Sunrise Beach at the Lake of the Ozarks.

A male driver was pronounced dead after four vehicles collided on westbound I-80 Thursday between Omaha and Lincoln.

Two weeks ago, with a different judge presiding and a Nebraska Supreme Court decision in their favor, Kelly Hoagland and Maria Salas Valdez adopted the child they had been raising since birth.

A team of about 25 troopers will travel from Nebraska to Del Rio, Texas, later this month in response to a request from Texas Gov. Greg Abbott.

La Vista police are going through surveillance video and will likely ask the public's help in identifying more potential witnesses.

27_IAWOODBINE. cutline: Woodbine Police Chief Gary Dull exits a building after checking to make sure it was clear.