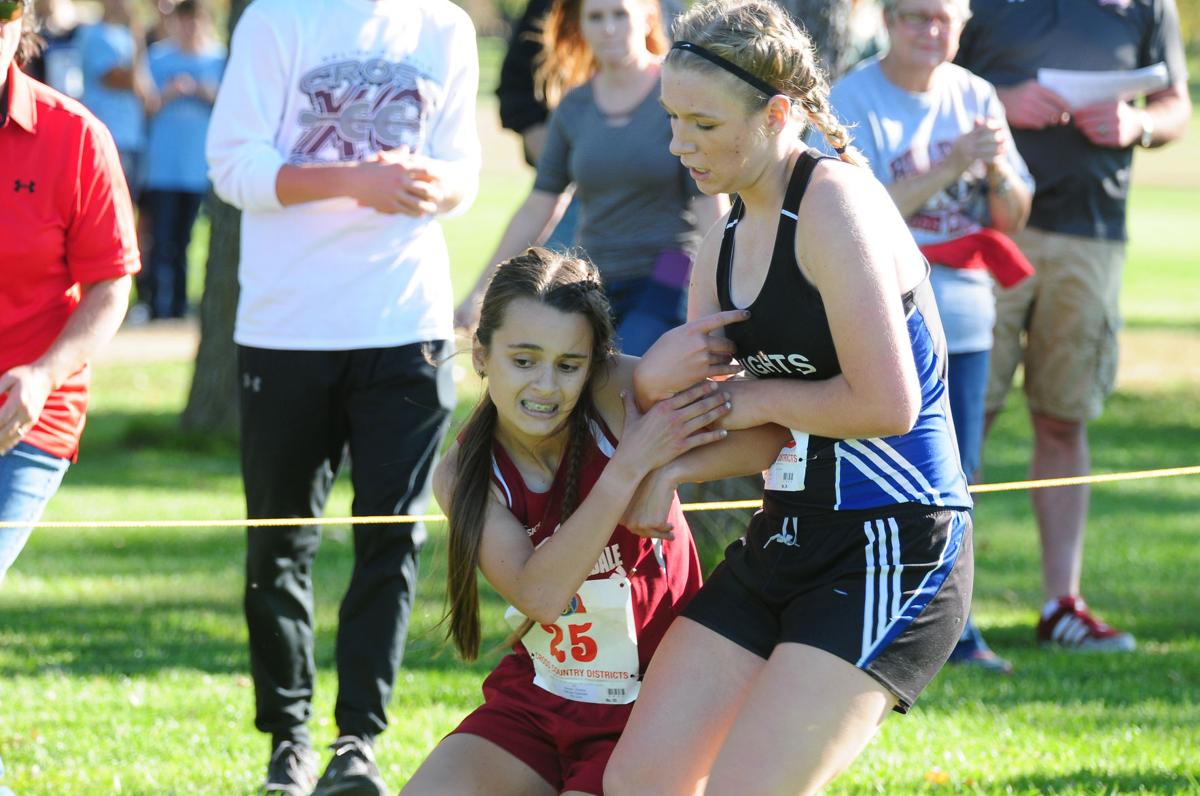 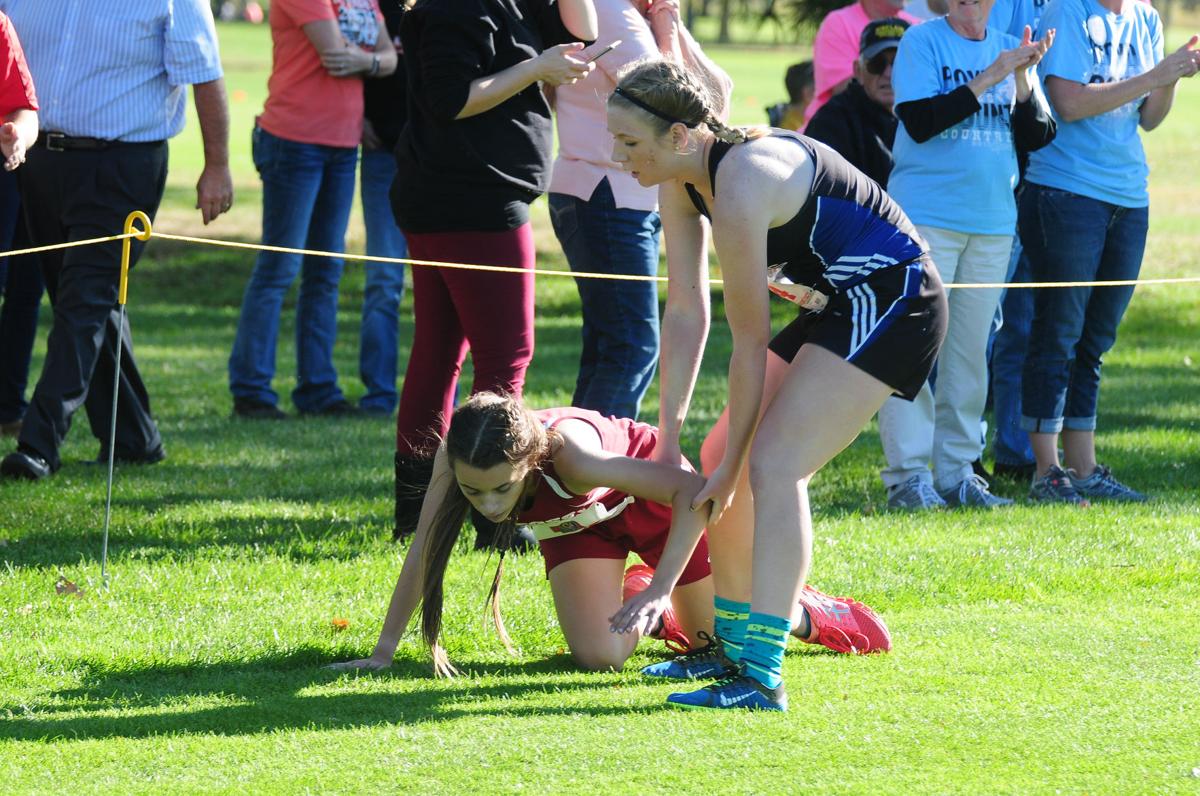 Erickson’s assistance has drawn attention on social media as an example of a young person doing the right thing no matter what.

Megan Erickson spotted another runner wobble, then fall onto the grass Thursday during the final stretch of a cross-country race.

The 18-year-old Erickson had promised herself that if a competitor needed help, she’d lend a hand.

Erickson did not waver.

“We’re going to finish,” she told the fallen runner.

In an act observers called true sportsmanship, Erickson helped Emma Bixler cross the finish line during a district meet in the north-central Nebraska town of Ainsworth. Erickson’s assistance has drawn attention on social media as an example of a young person doing the right thing no matter what.

With the finish line in sight, Erickson veered toward Bixler, a sophomore at Neligh-Oakdale High School who had fallen to her hands and knees from overexertion.

Erickson knew that she might be disqualified from the race for helping. Still, she reached down and lifted Bixler to her feet. Erickson put an arm around Bixler’s back and guided her toward the finish line. But Bixler’s legs kept buckling, and she fell again right before the finish line. Erickson said she couldn’t manage to lift Bixler up, so she pulled Bixler across the finish line.

Bixler’s mom, Lia Heckert, watched it all play out.

“I’m just amazed,’’ she said. “It’s good to know there are people out there with a heart who do the right thing.”

She said her daughter stayed home from school Friday to rest. She’s a little tired but doing fine, her mom said.

Matt Erickson said he’s not surprised by his daughter’s actions.

“I couldn’t be more proud of the way she handled it,” he said. “It makes you feel as a parent you did your job.”

Under national rules for track and cross-country, both Erickson, a senior at Rock County High in Bassett, and Bixler were disqualified from the race.

Ron Higdon, assistant director of the Nebraska School Activities Association, said national rules make clear that when a runner provides help to another runner, both are disqualified because it can affect the outcome of the race.

For example, if a runner who gets help completing the race takes third place, that keeps another competitor who didn’t get help from finishing in that spot.

“There are scenarios that come up,” he said. “It’s about the big picture and trying to make it an even playing field.”

Higdon said Erickson will be able to compete at the state cross-country meet this week. That’s because her whole team — an athletic cooperative called the North Central Knights — qualified by earning third place at Thursday’s district meet, he said.

Kristie Camp, who is Erickson’s coach, said that if Erickson hadn’t stopped to help, she likely would have finished in 10th or 11th place, automatically qualifying her as an individual for state.

Erickson said: “I know according to the rulebook, what I did was wrong. Morally, it was the right thing to do. I can’t imagine just leaving her on the ground.”

Bixler’s coach, Rick Eickholt, said it was clear that Bixler was unable to finish the race on her own and praised Erickson for stepping in.

As Erickson sat on the grass after the race, Eickholt crouched down next to her offering thanks.

“I told her she earned an awful lot of admiration and respect from me and everyone else that was there,’’ Eickholt said. “I know she didn’t get a medal, but her actions shined a lot brighter than any medal she would have received that day.”

When it comes to conference meets in cross country, coaches and players have differing opinions on the impact of the end of season event.

'That completeness I’ve always wanted': Nebraska woman finally meets daughter whom she gave up for adoption 50 years ago

Angel Fales-Ramirez longed for a family. She had one, once. But it all fell apart when she was 5. Recently, in a Gandy, Nebraska, living room three miles east of Stapleton, Angel finally had the mother she always longed for.

Just before the little girl was rolled into surgery, she told a nurse that her stuffed bunny needed a little help.

Brown’s new husband, Marcus Brown, arranged for the camel to be brought to Bridge North Chapel near 40th and Cuming Streets as a surprise for his wife, who volunteers with him at the ranch and loves Zeb — a guy known for his outgoing personality.

Gretna senior Mazie Larsen gets one more chance to compete on the Kearney Country Club course as the state meet takes place there beginning at noon Friday. Larsen and the Dragons will run in the Class B race at 2:30 p.m.

Everything you need to know about the Nebraska high school cross country state tournament as published in The World-Herald on Oct. 19.

In the Iowa Class 1-A state-qualifying meet at Panora, AHSTW’s Dalton Fischer was in about seventh place, jostling with another runner, when he was forced to brush a pine tree to maintain his balance. Fischer is allergic to pine, and he soon experienced an asthma attack.

Cross country runner Gabby McGinn has the second fastest time in the state this season, and the senior from Millard West has personal bests that include 18:42 in the 5K, 10:59 in the 3200 meters and 5:04 in the mile.

In the same spot where his legs gave out a year ago, David City Aquinas senior Elijah Frasher began gradually pulling away from his opponents Friday at the Class D state cross country championship meet.

There was no ice cream for Mazie Larsen Friday after her race at the state cross country championship meet, but the Gretna senior did win her second Class B gold medal.

A four-way tussle for the team title and an all-class gold medal for the guy who led his team to that championship Friday made the Class A boys state cross country championship one the Titans will always remember.

With a fair amount of focus on Lincoln East as a pre-meet favorite to win the Class A girls state cross country championship, defending champ Millard West let its running Friday do its talking.

A Nebraska teen nailed a basketball trick shot, and a video of the moment has gone viral.

Erickson’s assistance has drawn attention on social media as an example of a young person doing the right thing no matter what.