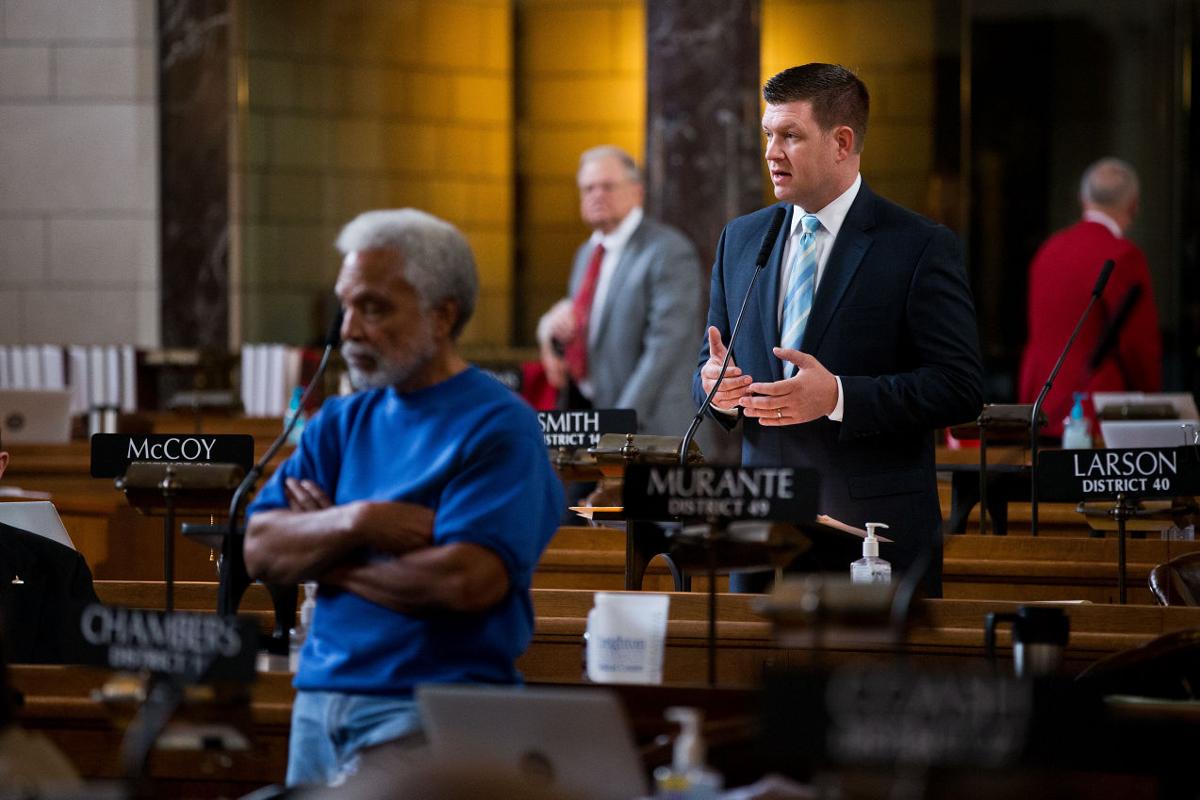 State Sen. Beau McCoy of Omaha has missed 16 of 37 days of the legislative session. He said commitments such as his role as chairman-elect and now chairman of the Council of State Governments have accounted for some of his absences, as has the time he has spent on work and family activities. 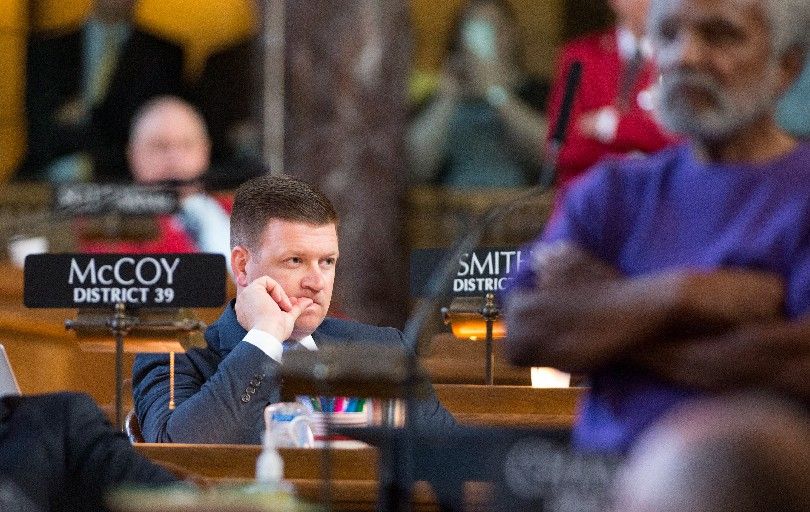 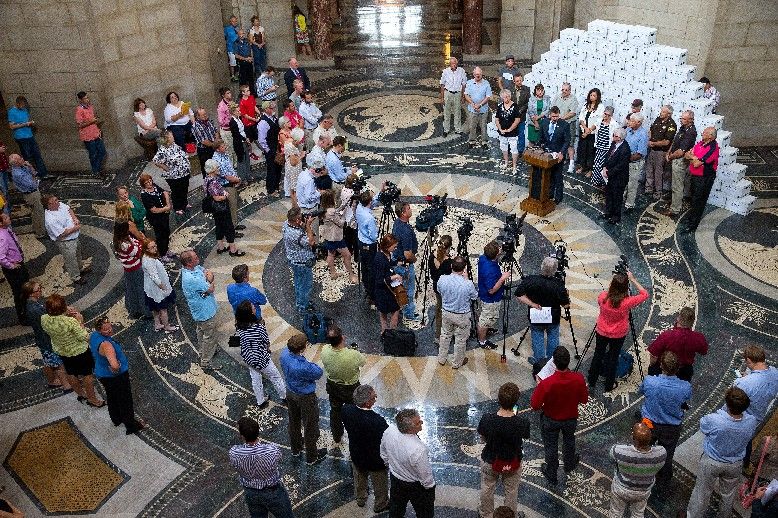 McCoy, shown addressing a pro-death penalty group in the State Capitol last August, says he is fulfilling his duties as a senator, and pointed out that “the issues and the workload here in the Legislature are backloaded” in the legislative calendar

LINCOLN — State Sen. Beau McCoy of Omaha has missed nearly half of his final legislative session.

Legislative records show that he has been absent for 16 days out of the 37 that lawmakers have met so far.

That’s twice as many days as any other senator during the 60-day session this year. He was gone about as much — 15 full and three half-days — during last year’s 90-day session.

McCoy said he “certainly” is capable of fulfilling his legislative duties, despite those absences.

“Clearly the issues and the workload here in the Legislature are backloaded,” he said, meaning that most key decisions are made late in the session.

“I look forward to being here,” he said. “We have a lot of important days here.”

But Judy Domina, who ran against McCoy in 2012, questioned how he could effectively serve constituents with that number of absences.

A person working in the private sector would have a difficult time keeping his job with that kind of record, she said, barring health problems or a family crisis.

If he were a public school student, that many absences would have school officials questioning his parents.

“I would wonder how he is doing his job for which he was elected,” Domina said.

They are expected to be citizen-lawmakers, not professional politicians. Term limits and a salary of $12,000 a year, plus expenses, help enforce those expectations.

But that means senators who are not retired have to balance their legislative duties with other jobs and family obligations.

A World-Herald analysis of attendance since 2011 found that most manage without missing more than a handful of legislative days. McCoy was among that group until last year.

He explained his increased absences in the past two years by pointing to his position as chairman of the Council of State Governments, an organization that works with all three branches of state government to help officials shape policy.

McCoy is the first Nebraskan to serve in that role since 1944. He was chairman-elect last year and became chairman in December. He said he spent three days in January at a council leadership meeting.

“It gives me an opportunity to represent Nebraska and the Unicameral on the national stage and international stage,” he said.

But his council obligations don’t explain most of his absences this year or last year.

For those, McCoy pointed to work and family.

“I stay busy with family activities, work activities,” he said. “I have a full schedule in addition to what I do here in the Legislature.”

McCoy and his wife have four children and a fifth due soon.

In addition, he started working last year as manager of the building products division of the Conklin Co., a Kansas City-based company. Charles Herbster, the Falls City, Nebraska, businessman who bankrolled McCoy’s unsuccessful gubernatorial bid in 2014, is Conklin’s founder and CEO.

Last year, McCoy said he planned to finish out his second term in the Legislature despite taking the new job, which involves traveling to meet with prospective clients and contractors.

Term limits bar him from seeking re-election this year.

Speaker of the Legislature Galen Hadley of Kearney said lawmakers are responsible for making their own decisions about attendance.

They are expected to tell the Clerk’s Office if they will be gone, but they do not have to provide an explanation for their absences.

“I think senators take their duties here seriously, and I respect that if there are times they can’t be here, they have a good reason,” Hadley said.

However, he noted that legislative bills can live or die depending on which senators are present when they are considered.

“The only concern I have is, when anybody is gone from the body, we have votes in committee and votes on the (legislative) floor that swing on one vote,” he said.

McCoy’s vote might have helped Sen. Dan Watermeier of Syracuse two weeks ago, on a bill that would have made it harder for passengers injured or killed in police chases to collect damages from cities and counties.

The World-Herald analysis found that McCoy’s absences this year and last year rank third among Nebraska lawmakers in sessions dating back to 2011.

Health and family issues accounted for the other two.

Sen. Danielle Conrad of Lincoln had the most absences. She was gone 30 full and one half-day during the 2012 session, following the birth of her first child.

She said she remained actively engaged, listening to debate online and keeping tabs on activity through her staff. She often came in for afternoon hearings and Appropriations Committee hearings and executive sessions, even if she was absent for the morning debates.

Attendance records are not kept for committee hearings.

“If an issue was going to be close or was an issue I felt passionately about, I would go in,” Conrad said.

Former Sen. John Wightman of Lexington missed 22 full and two half-days during the 2011 session, while recovering from a serious infection that followed a knee replacement.

The question Dr. Fauci wants you to consider this Thanksgiving

The question Dr. Fauci wants you to consider this Thanksgiving

State Sen. Beau McCoy of Omaha has missed 16 of 37 days of the legislative session. He said commitments such as his role as chairman-elect and now chairman of the Council of State Governments have accounted for some of his absences, as has the time he has spent on work and family activities.

McCoy, shown addressing a pro-death penalty group in the State Capitol last August, says he is fulfilling his duties as a senator, and pointed out that “the issues and the workload here in the Legislature are backloaded” in the legislative calendar