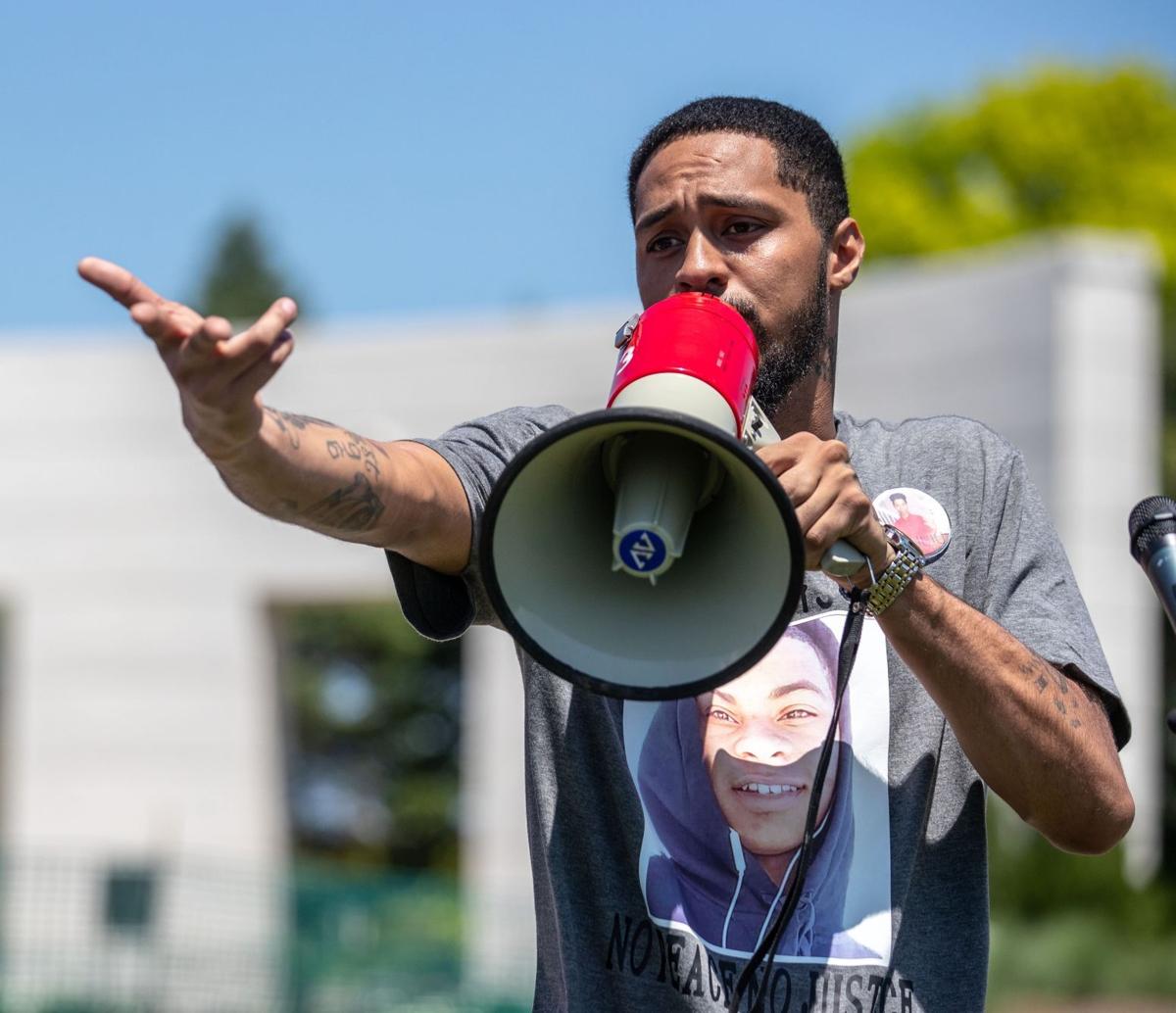 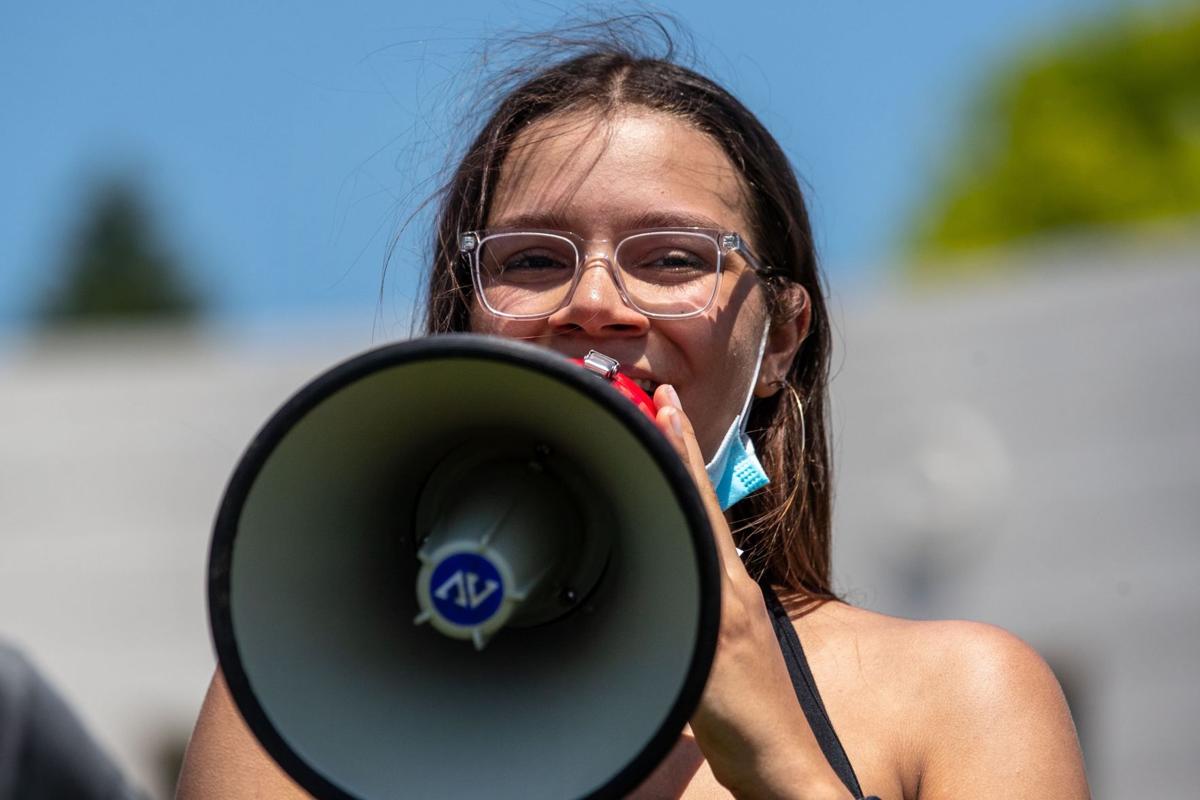 Elise Smith speaks Friday during a Black Lives Matter rally at Memorial Park that she organized. 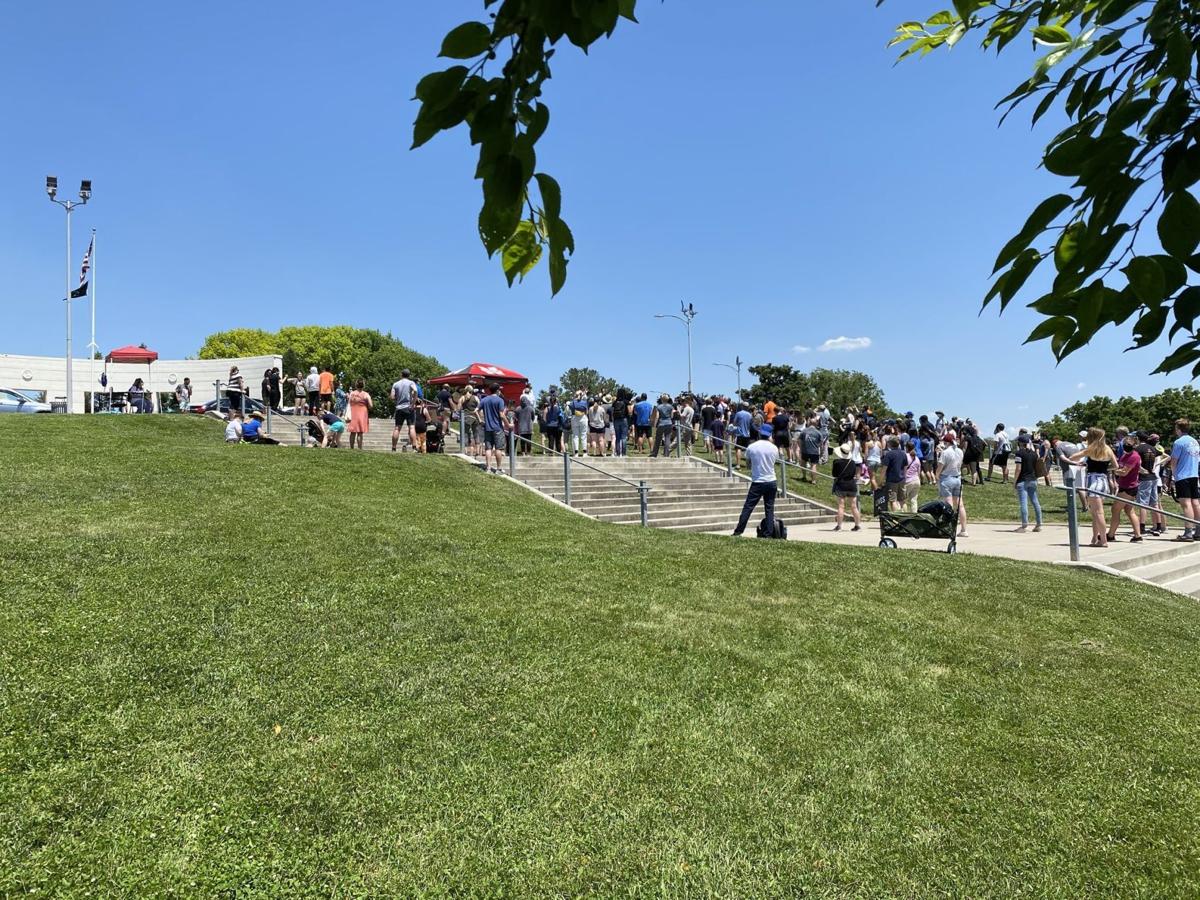 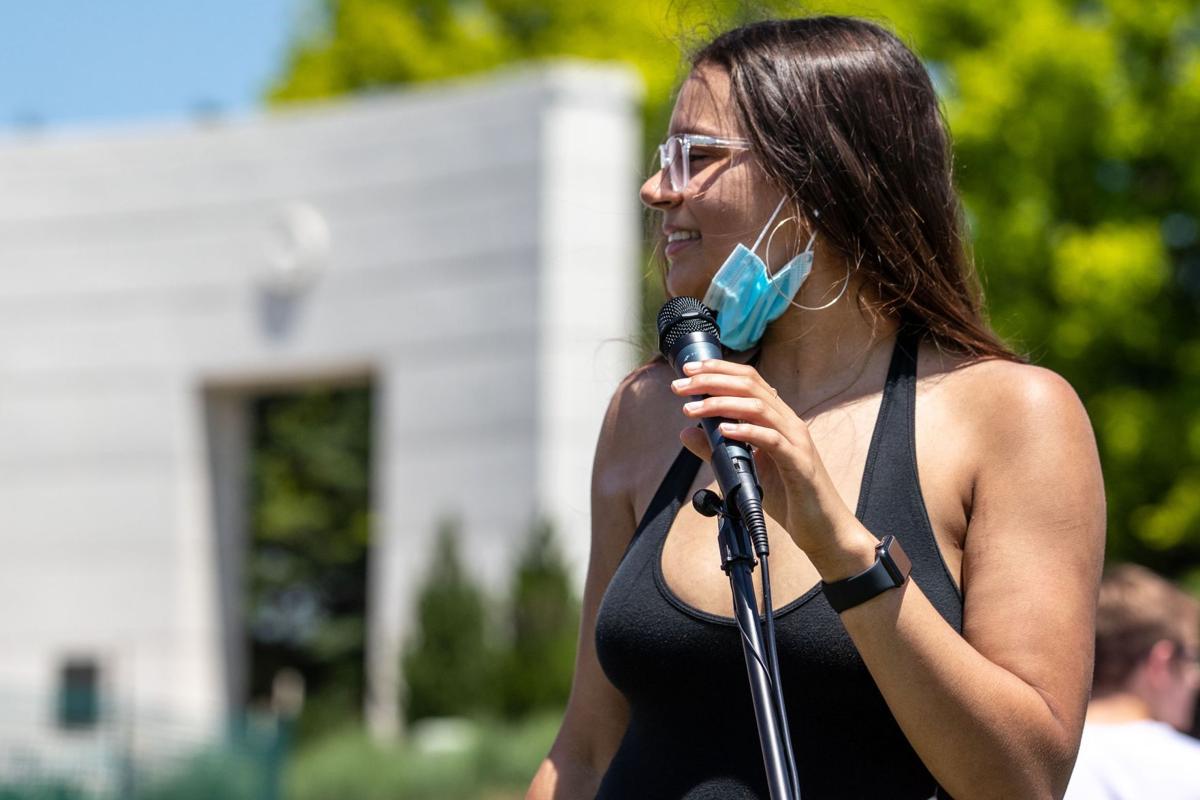 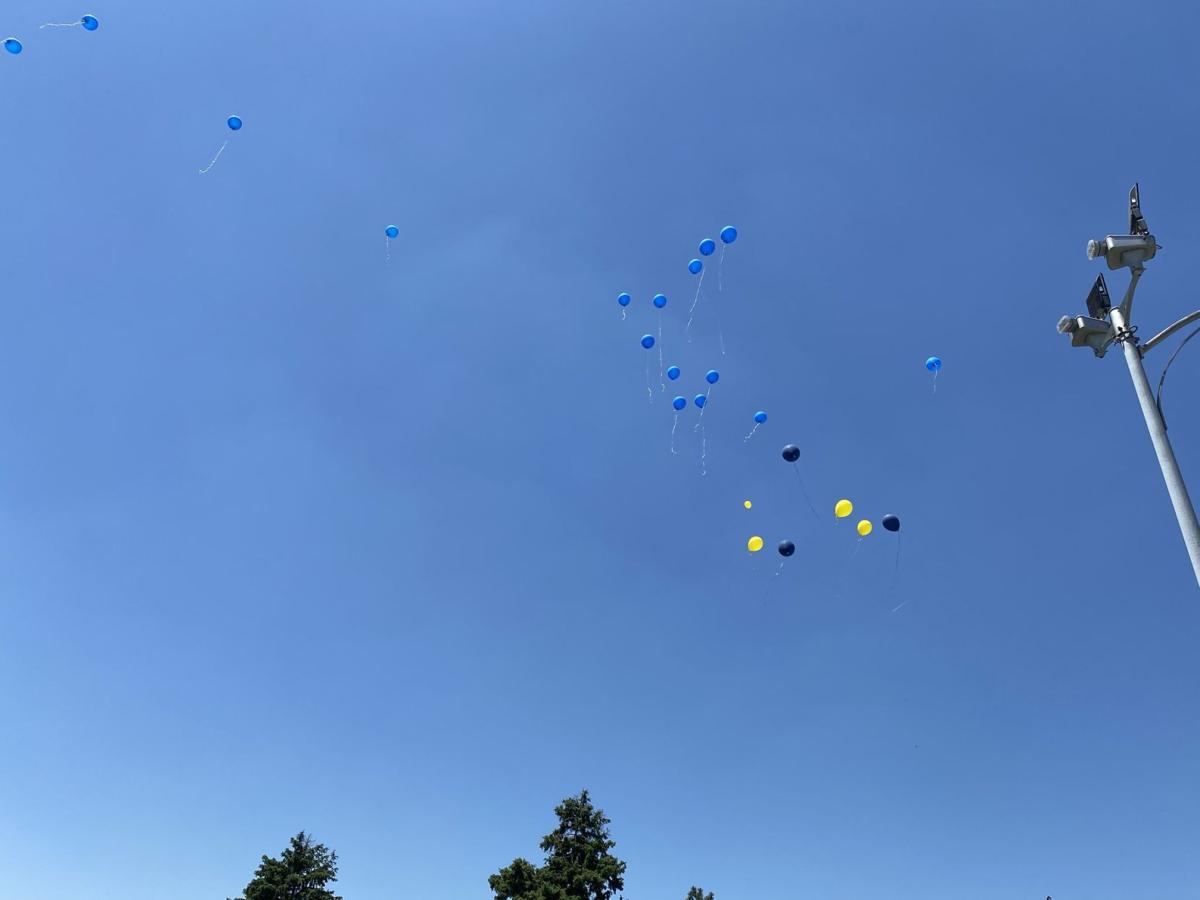 James Scurlock's family released balloons Friday to remember the 22-year-old, who was fatally shot last Saturday in the Old Market. 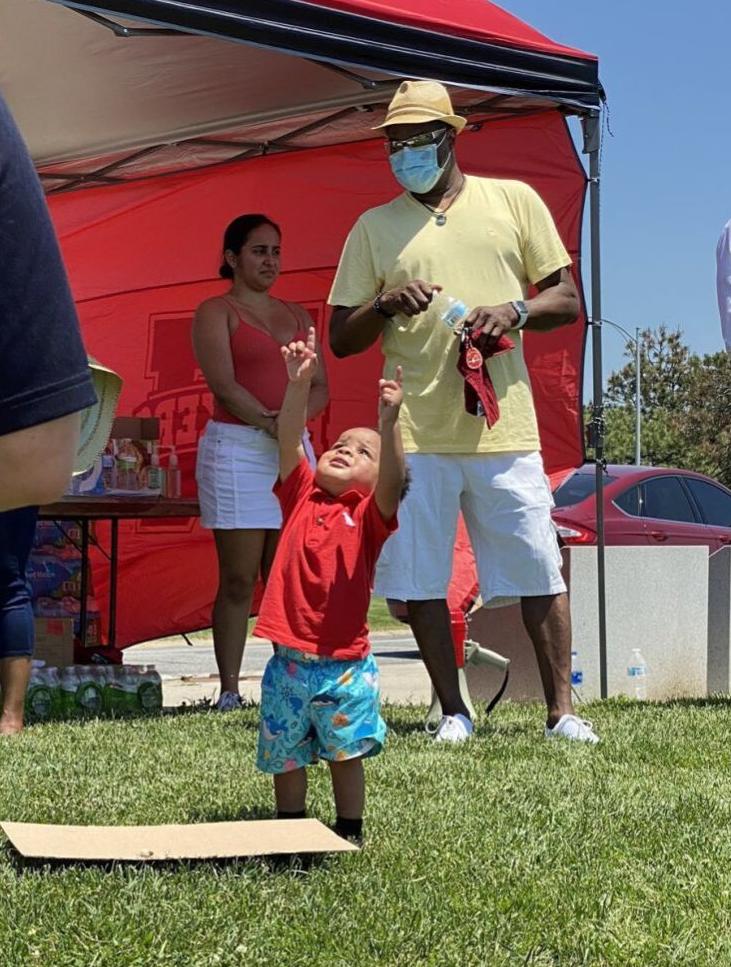 A crowd walks from Memorial Park to Elmwood Park on Friday after a Black Lives Matter rally. 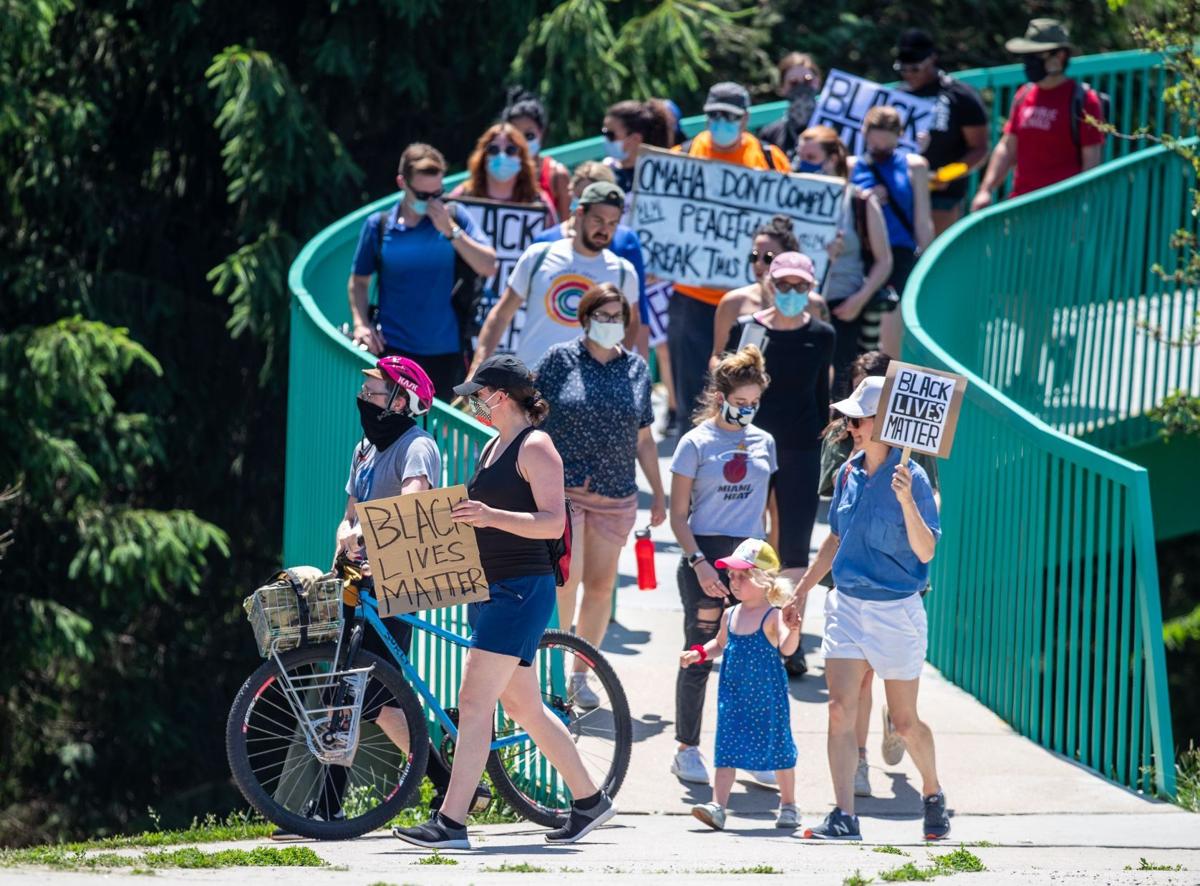 People march from a rally in Memorial Park to Elmwood Park on Friday. The Black Lives Matter rally was organized by Westside High junior Elise Smith, 16. 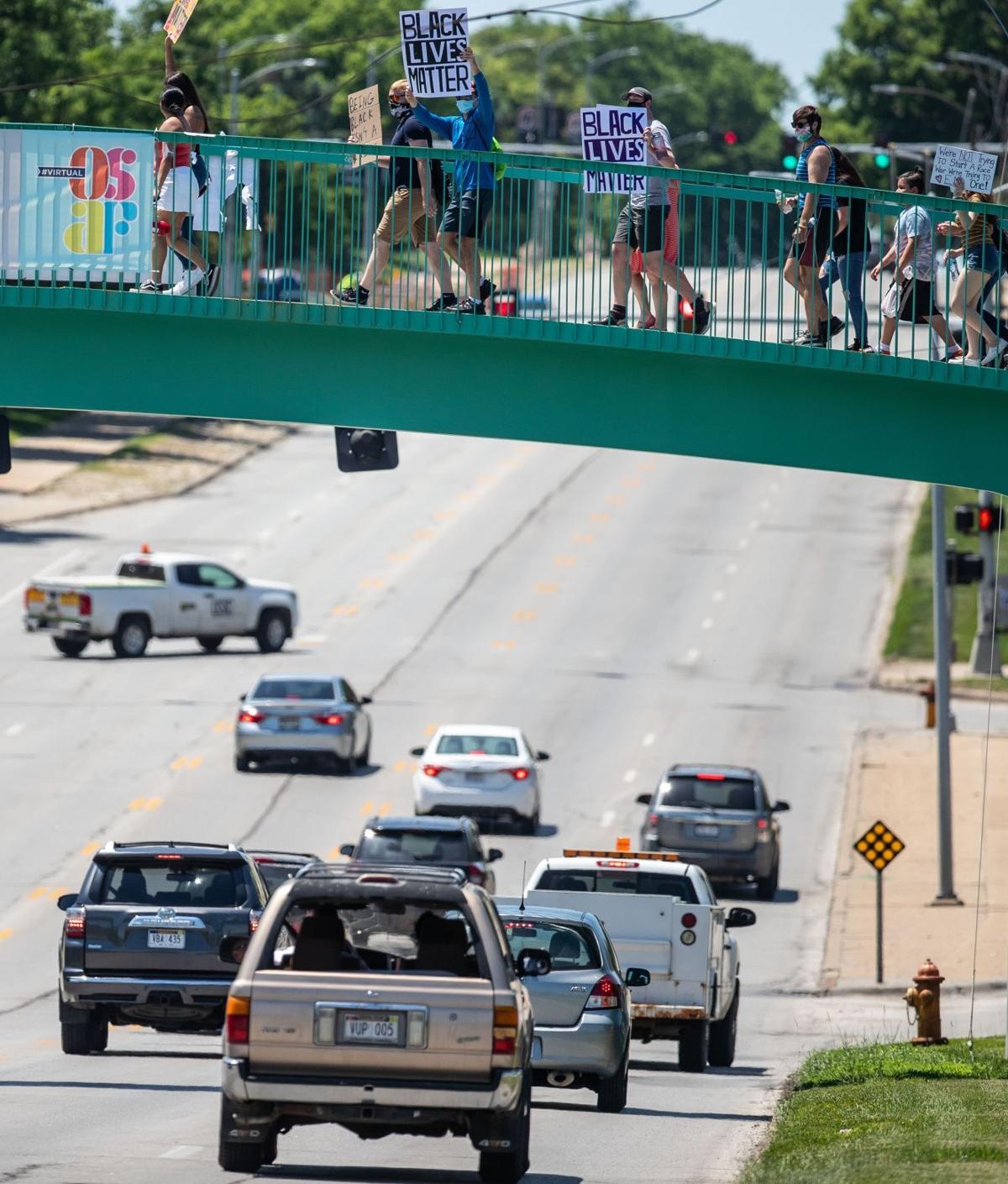 Since she was a little girl, Omahan Elise Smith aspired to change the world.

She dreamed of being a civil rights activist, working in the medical field or teaching.

Smith, a junior at Westside High School and a member of the local Black Lives Matter group, decided this week to organize a rally. She worked at it, thinking maybe 20 people would come. Her idea became a reality Friday, with roughly 200 participants at a rally at Memorial Park, which ended with a march into Elmwood Park.

Family members of James Scurlock, who was fatally shot in the Old Market last Saturday, released blue, black and yellow balloons in his memory.

Another prayer vigil for Scurlock was held in the early evening at 24th Street and Camden Avenue in North Omaha. Attendees called for peace and stood during a moment of silence in front of a mural of the slain 22-year-old.

Scurlock was killed Saturday night in a scuffle with bar owner Jake Gardner during chaotic protests that flared up in the Old Market.

Douglas County Attorney Don Kleine declined to file felony charges against Gardner for the shooting, saying he was acting in self-defense after Scurlock jumped on his back.

But Wednesday, Kleine said he supported convening a grand jury to review whether charges should be brought against Gardner.

In addition to the gatherings at Memorial Park and 24th and Camden, a smaller band of protesters returned to 72nd and Dodge Streets, the site of other large-scale demonstrations over the last week that ended in tear gas and arrests.

The group kept to the sidewalks on the corners in front of the Petco and Target, earning praise from several police officers watching from across the street, and the night stayed calm.

Over the last week, Dezmend Drumgould spent nearly every night at a protest.

He came down on the first night for a little thrill, to see the crowds and the police.

The signs and the honking and the chants have been energizing and validating, he said, but Omaha leaders need to sit down and start sketching out what real change will look like.

“We need to organize,” Drumgould said. “There’s further steps that need to be done.”

Omaha native Lester Johnson, 25, said he was tired. He was tired of having to fight for the most basic form of equality, the ability to live as a black man in America without fear. It shouldn’t take a protest, he said, to establish that human lives have value.

“Being black in this country is scary,” he said. “I’m a college graduate. I have no issues with the law. I pay my taxes. But too often in the eyes of the law, I am a big black man who people see as a threat.”

At Memorial Park, Nick Harden, Scurlock’s brother, told the crowd that his family wants people to continue to protest peacefully and move forward.

“This is peace and equality, and we need to reach it,” he said. “Let’s reach it as a team and as a community as a whole.”

Dr. Ali Khan, dean of the College of Public Health at the University of Nebraska Medical Center, urged people to get involved because people can’t stop racism from their couch.

A child of Pakistani immigrants, Khan said he has faced uncomfortable comments and slurs, but because of his privilege, he hasn’t feared for his life like black Americans.

“I do understand that there are various extents of the same type of racism and violence to people who are brown, Hispanics, Native Americans, immigrants and also the LGBT community,” he said. “These same issues apply to all of these people who are under-resourced and often marginalized within our community.”

Kara Eastman, the Democratic Party’s candidate for the 2nd Congressional District seat held by Rep. Don Bacon, said she’s running to represent everyone who was at the Memorial Park rally.

“It is time for us to exert the political will to actually have equity in our system, “ she said.

Eastman urged people to use their voices to vote, because it can make a difference.

City Councilman Pete Festersen, whose district includes Memorial Park, said the council this week adopted a resolution condemning the death of George Floyd of Minneapolis, who was pinned by the neck for nearly nine minutes by a Minneapolis police officer. The City Council also listened to many speakers at its meeting who addressed issues of inequality and race.

“We’ve all gotta own this, and we’re all responsible for this. North Omaha, South Omaha, East Omaha and West Omaha,” he told the crowd.

RaJeanna Scurlock, Scurlock’s sister, brought her 2-year-old son, Marquis, to the rally because she said it was important to show her son that changes in attitudes and actions are possible.

RaJeanna, 20, said her brother was a good person and was trying to save people around him from the bar owner, who was armed with a gun.

Marquis released the last balloon, which was blue.

Then he stretched out his arms to the sky and pointed with both hands.

Photos: Several rallies and protests in Omaha on Friday

On the sixth night of protests in Omaha, Nebraska’s best-known advocate for racial justice, State Sen. Ernie Chambers, visited with about 60 mostly young people outside City Hall about injustice and civic engagement.

In an email to faculty, staff and students, UNL Chancellor Ronnie Green said he had been shaken to his core by the previous week, starting with the “unjust and senseless” death of George Floyd. Since then, he said he had been listening to black voices in the community and reflecting on national and UNL history on the challenge of racism.

The third anniversary of Zachary BearHeels’ death while in the custody of Omaha police fell as protesters across the country took to the streets again to denounce police brutality and racism.

From Grand Island to Chadron, towns across Nebraska rally. 'Silence is violence.'

From small towns to large, many Nebraskans are expressing solidarity with the Black Lives Matters movement.

Letter from the editor: We'll listen to our diverse community; there's nothing to fear

It is part of my pledge to you as The World-Herald’s editor that we will launch efforts to be inclusive, to improve outreach and to give a platform to diverse voices, including through new regular opinion contributors.

Greg Moore: Police and black folks — the swagger and disrespect must end

Many whites know cops as fathers, brothers, cousins, friends and neighbors. We, however, know them as a swaggering, disrespectful, and threatening presence.

More than 50 people came out to help pick up litter Saturday afternoon starting at 24th and Grace Streets and moving north a little over half a mile to 24th and Locust Streets.

"My community isn't down by 72nd and Dodge," Ellie Akough said. "I wanted the people in $600,000 homes to care because they don't have to. I wanted them to care as much as I care."

Community leaders — teachers, pastors, coaches — said they’d like for the city, the state and the nation to navigate through the storm instead of sailing away from it.

World-Herald reporters and photographers are covering a large rally near 72nd and Dodge Streets today.

Omaha has seen more than a week of protests since George Floyd’s death May 25, and Sunday’s crowd was the largest and most diverse yet.

Editorial: Sunday's rally set a positive beginning, but it must be followed with action

Omahans set the right tone over the weekend for the journey that lies ahead as our city works toward racial progress. At public gatherings, th…

Callers to Ricketts' radio show push back against restrictions on worship services, hospitals

Feelings of frustration, mistrust and dissatisfaction with law enforcement and the criminal justice system spilled out at a listening forum of the Nebraska Legislature’s Judiciary Committee.

Elise Smith speaks Friday during a Black Lives Matter rally at Memorial Park that she organized.

James Scurlock's family released balloons Friday to remember the 22-year-old, who was fatally shot last Saturday in the Old Market.

A crowd walks from Memorial Park to Elmwood Park on Friday after a Black Lives Matter rally.

People march from a rally in Memorial Park to Elmwood Park on Friday. The Black Lives Matter rally was organized by Westside High junior Elise Smith, 16.