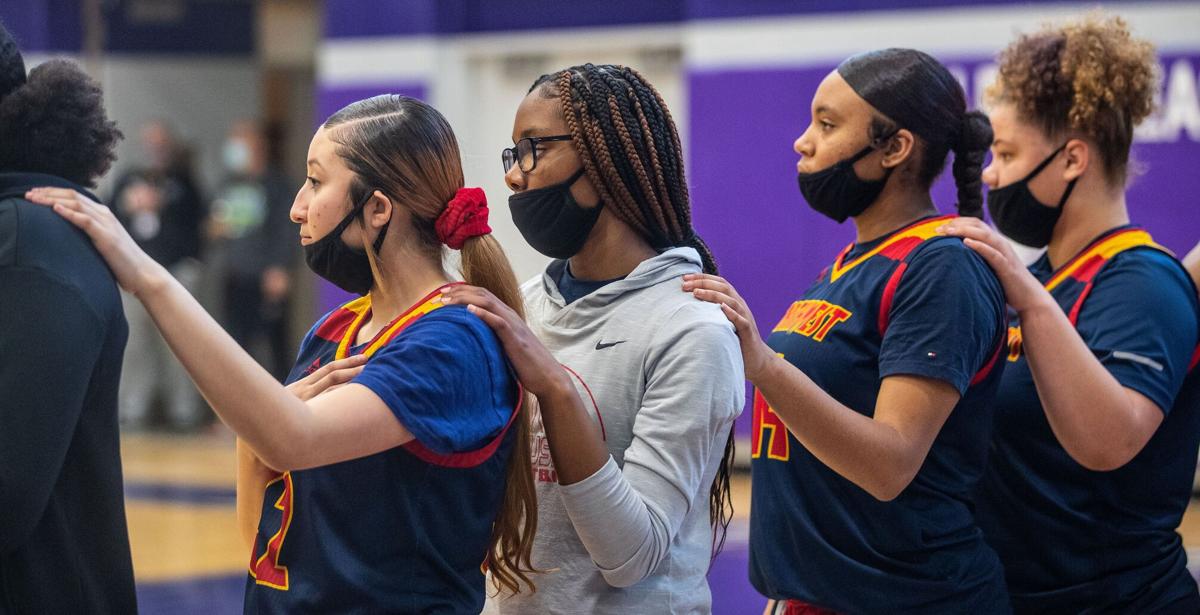 From left, Omaha Northwest High’s Nicole Rodriguez, Kamille Hamilton, Cierra Marks and Janiya Ward during the national anthem before their game against Bellevue East on Saturday in Bellevue. On Feb. 11, boys in the crowd yelled a racial slur at the team after their game against Norfolk High. 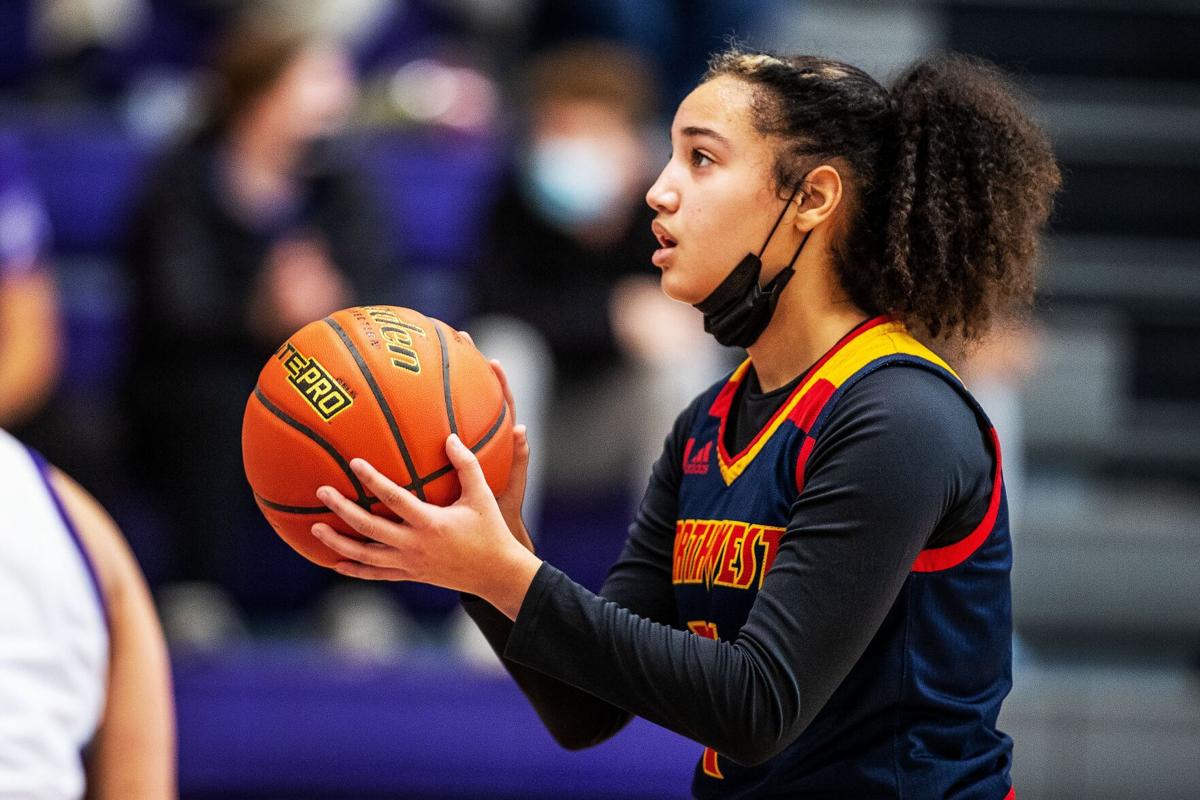 Northwest’s Ravyne Wallace prepares to shoot a free throw Saturday. After the Norfolk incident, the school’s cheerleaders apologized, but some Northwest players are seeking an apology from the boys in the crowd. 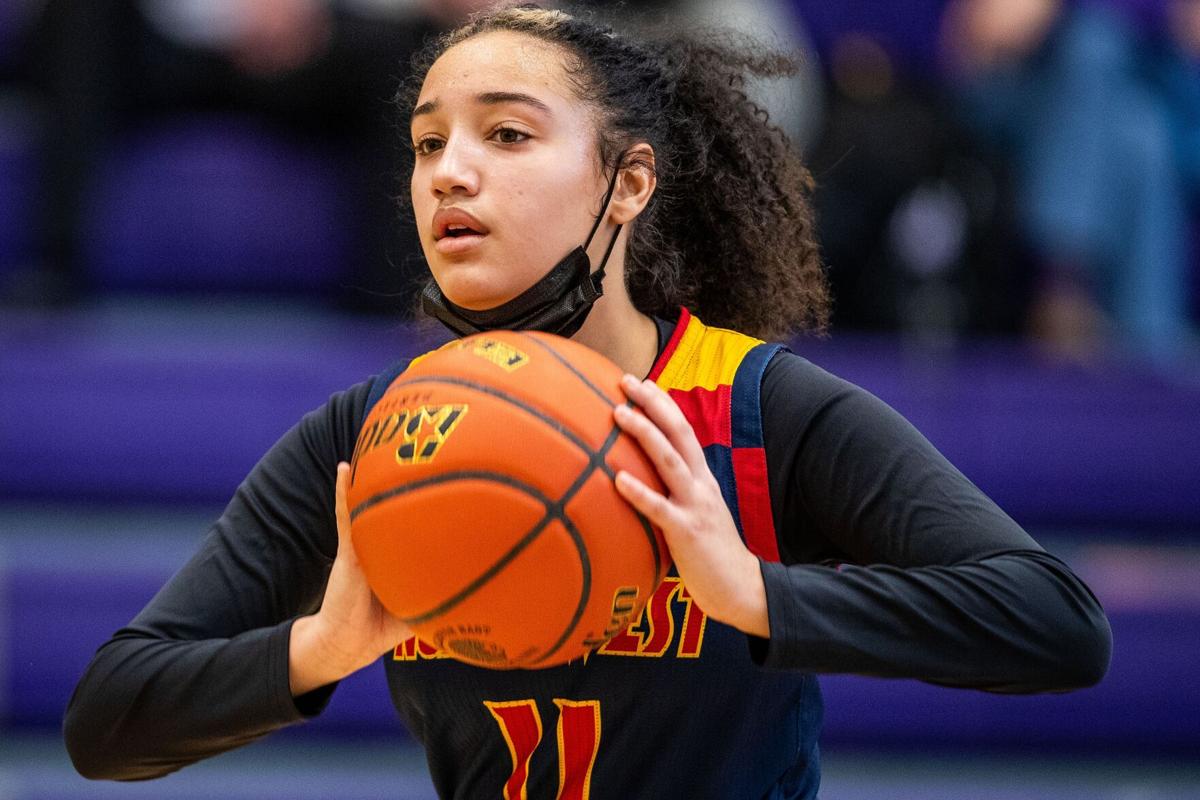 Omaha Northwest's Ravyne Wallace looks to pass the ball against Bellevue East during a Saturday game. 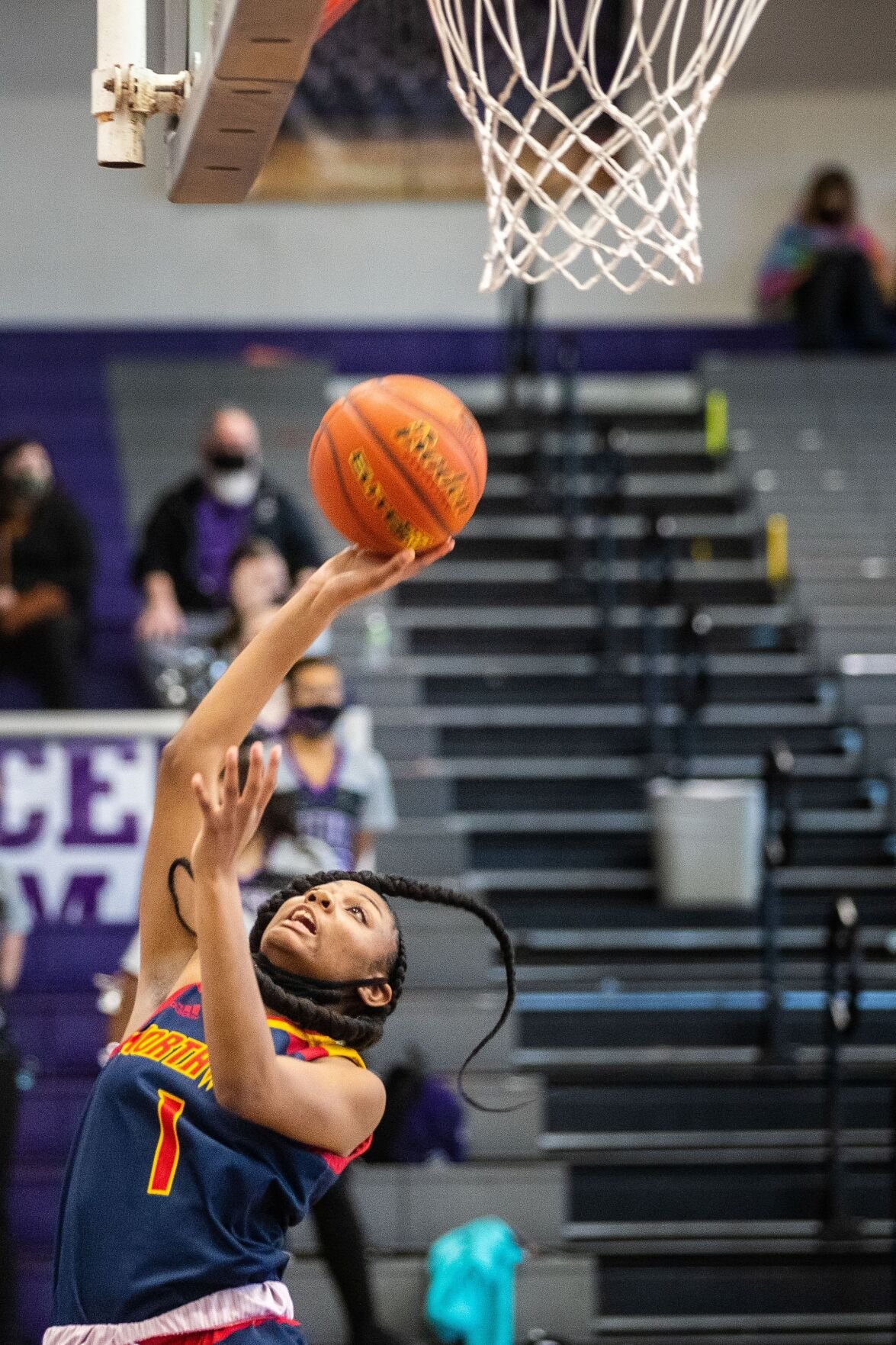 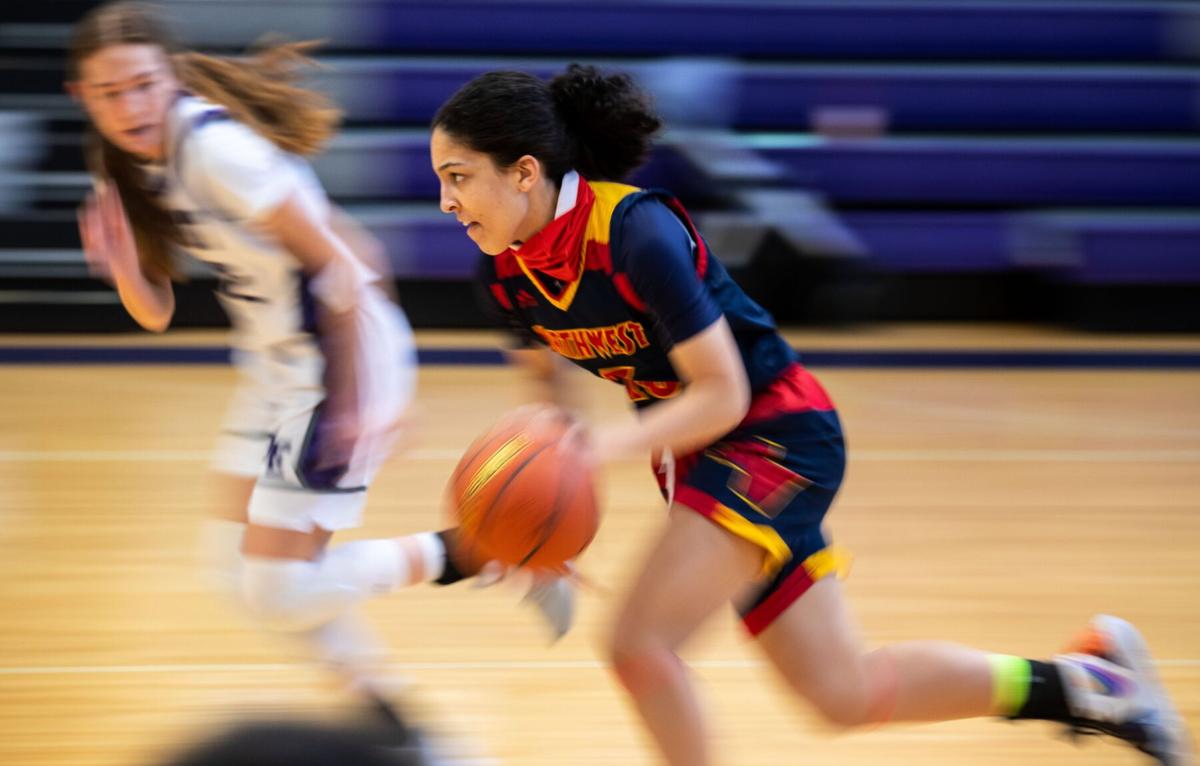 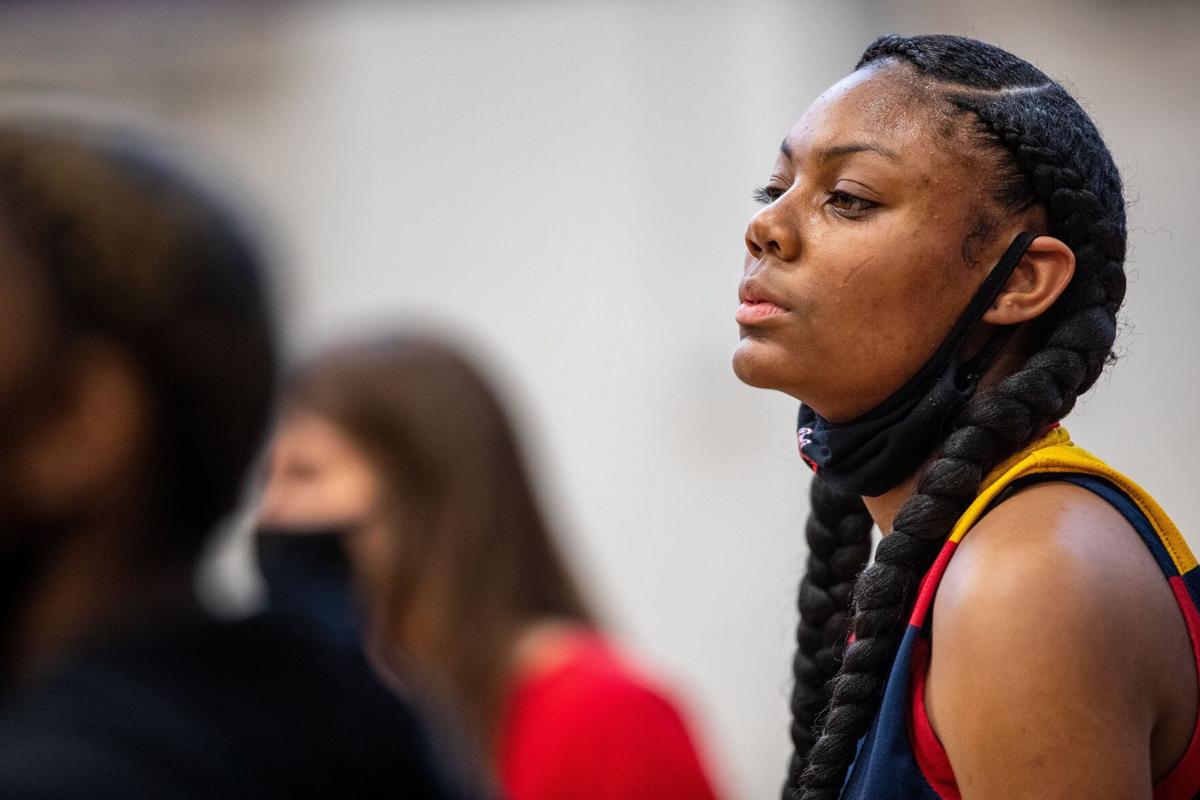 Northwest's JayVeonna Williams watches as the Huskies take on Bellevue East on Saturday. 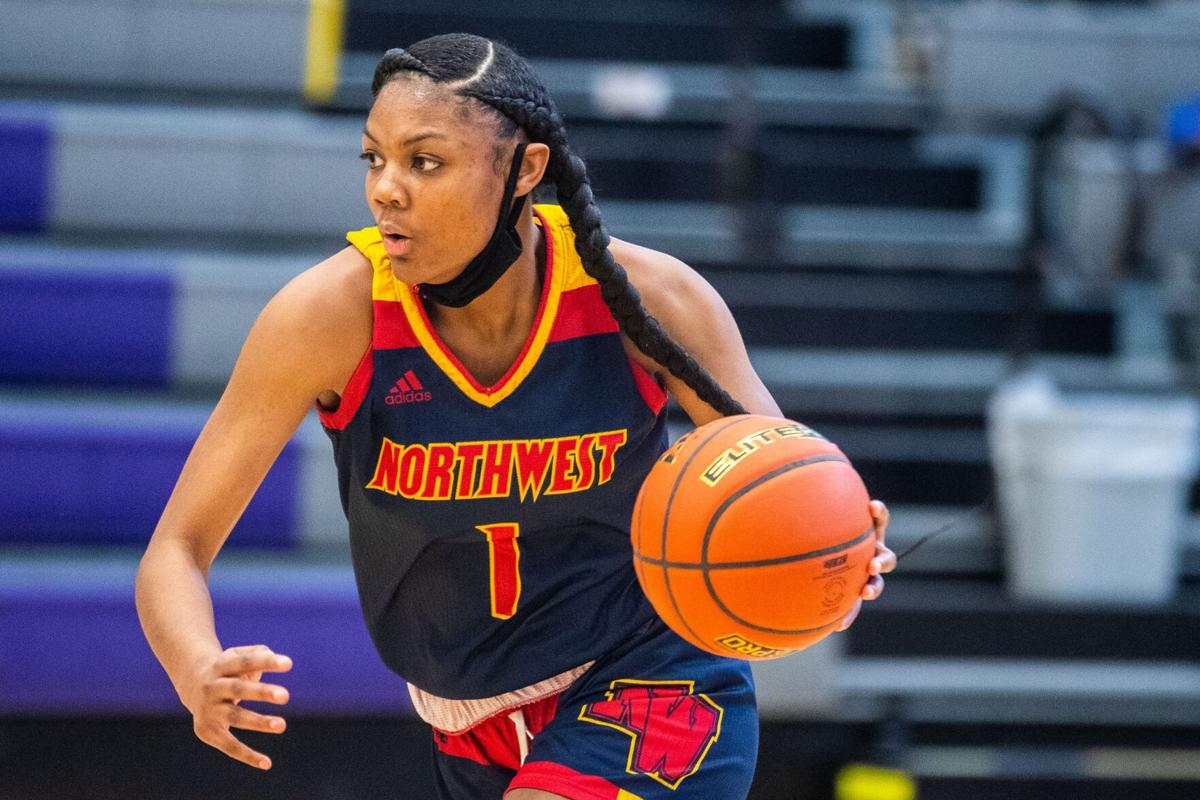 Pressure is mounting on the Nebraska School Activities Association to do more to counteract racist behavior at school sporting events after another report of a racial slur being yelled from the stands at Black high school basketball players.

The NSAA appears to be taking some steps and considering more in the wake of the most recent reports.

The latest incident occurred at Norfolk High School, less than two weeks after a similar report at Creighton Prep. Officials from Omaha Northwest High School reported that boys in the Norfolk crowd yelled the N-word at the Northwest girls varsity team as they left the court after a Feb. 11 game against Norfolk High.

JayVeonna Williams, a junior on the Northwest team, said she had never before experienced that from basketball fans.

“Everybody was like, ‘What happened?’” Williams said. “The Norfolk cheerleaders were apologizing to us. Half my teammates were mad, like shaking and crying. It was a very shocking moment because who knew that would happen? We just came down here to play basketball.”

After a Northwest assistant coach, Taylor Trotter, posted on Facebook about the incident, Norfolk Mayor Josh Moenning apologized to Northwest students and coaches on behalf of the city.

“I wanted her to know that people in Norfolk, leaders in Norfolk, have no tolerance for such a thing,” Moenning said in an interview. He said Norfolk has been working to build inclusion in city government and the schools, and he pledged to increase those efforts.

The Norfolk Public Schools issued a statement apologizing “for or any inappropriate comments or actions that occurred” and “does not condone and will not tolerate acts of racism or discrimination.”

In a written statement to The World-Herald, Norfolk Public Schools spokeswoman Sarah Dittmer said school district officials had met with NSAA officials about the incident.

“The school district has committed to increasing efforts to raise student, staff and community awareness regarding acceptance and respect for one another,” according to the statement.

“Staff and student communication was shared this week reminding everyone of the expectations in classrooms and at activities and events. NPS has also committed to developing a comprehensive PK-12 equity and diversity plan.”

Northwest parents wrote letters to the NSAA calling for more action, including anti-bias education and penalties against schools that violate policies.

“Until the NSAA and school administration treats this as more than a public relations issue, nothing will get done,” Tahnee Markussen, mother of a student on the Northwest team, wrote in a letter to the NSAA that also alleged a pattern of bias by referees. “Until that change happens, expect our community to advocate for our girls in our loudest voice as much as we possibly can.”

Markussen said she is putting together a team of experts to study bias in Nebraska high school sports and make recommendations to the NSAA.

One concern is whether there is bias in how NSAA rules are written or applied. She also said she has spoken with academic researchers about probing patterns of fouls, including whether there are disparities when mostly Black teams play mostly White teams.

Meanwhile, the American Civil Liberties Union of Nebraska renewed its call, with several other Nebraska advocacy groups, for the NSAA to take a series of steps outlined in a petition the groups launched after an incident in Fremont last year.

The petition drive started in March 2020. It followed an incident in which racially insensitive comments were directed at Lincoln High players during a girls basketball game at Fremont High School and incidents in Lexington where fans chanted “Build that wall” and yelled at Latino students, “Go back where you came from.”

The ACLU said there had been four years of increasing reports of bigoted behavior at school sporting events across Nebraska.

The number of signatures doubled this month to more than 1,300 after reports of the racial slur directed at Omaha Northwest players, and of someone in the Creighton Prep student section calling Bellevue West’s star point guard, Chucky Hepburn, the N-word during a game at Prep.

The petition asks the NSAA to collect data on racist incidents at athletic events, ensure that penalties are applied to teams that repeatedly participate in such conduct and establish a public complaint process for parents and others who witness concerning behavior at athletic events.

Rose Godinez, an attorney with ACLU of Nebraska, said she followed up with the NSAA last week and received “a promising response.”

“They let us know that they are currently tracking incidents, to see if there are patterns or trends,” Godinez said. “They are looking at penalties to apply to schools or students. ... And then the last thing was that they developed a questionnaire that schools will fill out.”

Godinez said NSAA leaders had “generally been receptive” to the advocate groups’ recommendations.

“So we’re hopeful that all of the recommendations will be implemented here soon,” she said. “Because it’s way past time to implement these measures.”

NSAA Executive Director Jay Bellar did not return calls or emails seeking comment for this article.

The NSAA board of directors discussed the Norfolk incident Wednesday in closed session during their February meeting, the Lincoln Journal-Star reported. Bellar told the Lincoln paper that Norfolk school officials were investigating the Feb. 11 incident, and that the NSAA is obligated to “ensure that the situation is properly addressed.”

The association can reprimand or fine a school, or suspend teams, if a school does not respond appropriately.

Jerome Wallace, whose daughter plays on the Northwest team, said he didn’t hear the racial slur but saw the Northwest girls’ and Norfolk cheerleaders’ reaction. His daughter texted him from the locker room, “We were getting called the n-word. ... The cheerleaders apologized immediately, but I want an apology from the boys who were chanting it.”

Wallace said that using the N-word and feeling safe to express it in public is learned behavior. Education is needed to overcome the underlying racism, America’s original sin, he said.

“We have to make sure that we focus in on the academic side of this,” Wallace said. “We’re dealing with the old patterns of a society which are now colliding with the changing demographics of our diverse society.”

Omaha Concordia boys basketball is in its first district final with a chance to play at the state tournament for the first time.

Norfolk Public Schools has been placed on probation after a racial slur toward the Omaha Northwest girls basketball team came from the high school’s student section during a Feb. 12 game.

In his speech in 1967, Martin Luther King Jr. said, “Racism is still deeply rooted all over America.” Fifty-four years after King said these w…

In wake of racist slurs at Nebraska's high school sporting events, the NSAA is seeking ways to protect students from bigotry.

From left, Omaha Northwest High’s Nicole Rodriguez, Kamille Hamilton, Cierra Marks and Janiya Ward during the national anthem before their game against Bellevue East on Saturday in Bellevue. On Feb. 11, boys in the crowd yelled a racial slur at the team after their game against Norfolk High.

Northwest’s Ravyne Wallace prepares to shoot a free throw Saturday. After the Norfolk incident, the school’s cheerleaders apologized, but some Northwest players are seeking an apology from the boys in the crowd.

Omaha Northwest's Ravyne Wallace looks to pass the ball against Bellevue East during a Saturday game.

Northwest's JayVeonna Williams watches as the Huskies take on Bellevue East on Saturday.