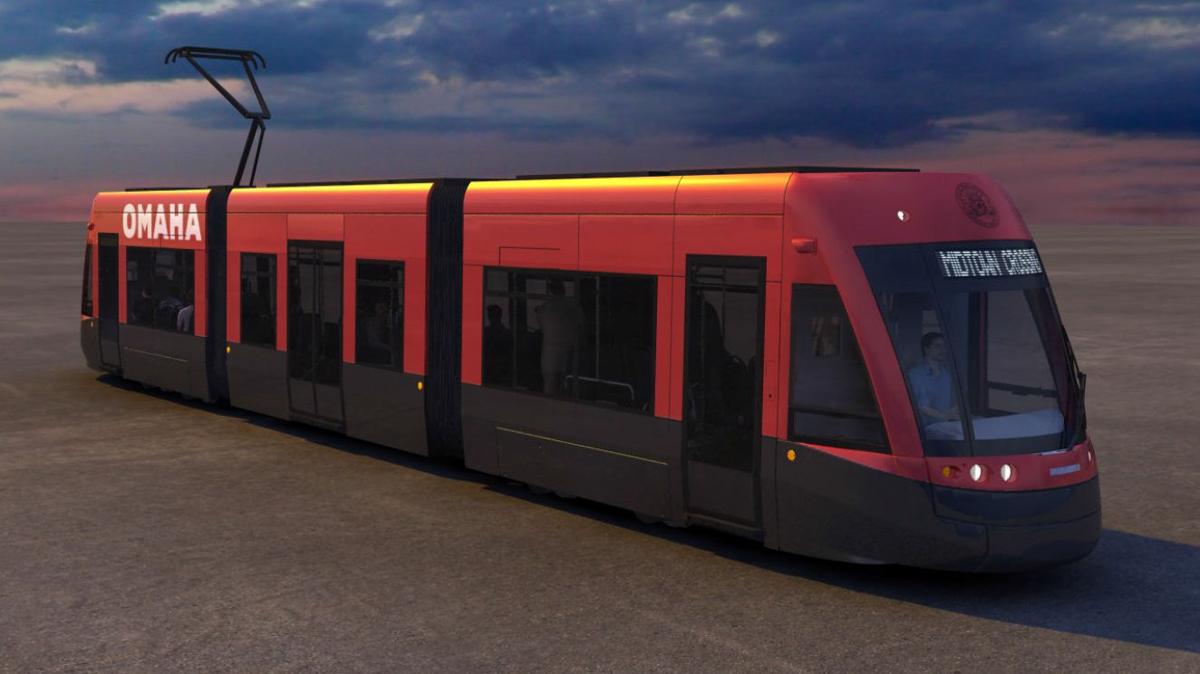 This is one concept of a modern streetcar, as envisioned by the Omaha City Planning Department. 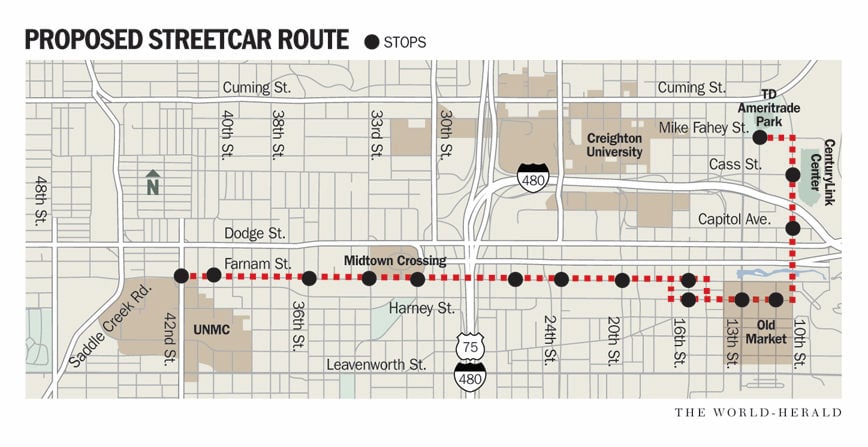 People have talked about a modern Omaha streetcar off and on for at least 20 years, but now the discussion is starting to get real.

A financial assessment done for the city lays out numerous options for paying to build a streetcar line, to put trains on the tracks and to operate them.

The analysis, made public here for the first time, is on the Omaha City Council agenda for Tuesday. It estimates it would cost $156 million to build and equip a streetcar line from TD Ameritrade Park in downtown Omaha to 42nd and Farnam Streets in midtown Omaha. It would cost about $7.5 million a year to operate the line.

The assessment leans toward using an assortment of local funding sources, including city money, philanthropic donations and tax-increment financing from real estate developments along the streetcar route. The study concluded those who benefit the most from a streetcar could pay the most. (Read the full report.)

Several of the funding options would tap real estate development growth expected to be generated by a streetcar — in essence, trying to make the streetcar help pay for itself.

The assessment leans away from pursuing federal money; that’s seen as too slow and uncertain. Still, the study does not rule out federal dollars entirely. The report’s authors project that a locally funded streetcar could be built by 2021, but a federally funded project would take 18 months longer.

One funding source is not mentioned at all: increased property taxes.

The committee members will be asked to make a recommendation on funding to the Mayor’s Office by the end of the year. They will also recommend a route. There are calls for extending the line west to the University of Nebraska Medical Center’s planned mixed-use development at Saddle Creek Road and Farnam Street; east to the riverfront; and north to Creighton University.

Meanwhile, the Omaha-based engineering and architecture firm HDR Inc. is working on advanced conceptual engineering for a streetcar. That is supposed to pin down in more detail what work it would take and what it would cost to actually build a streetcar line. It will include a series of public meetings and more targeted gatherings of stakeholders to gather public opinion.

To be sure, the question of whether or not Omaha will build a streetcar is yet to be decided. But the question is beginning to shift from “if” to “how.”

A common narrative in favor of a streetcar is developing. It echoes what city planners have thought for years, and what they say has been happening in several other cities that started modern streetcars.

Former U.S. Rep. Brad Ashford, executive director of the streetcar-friendly Midtown 2050 nonprofit group, said business and city government leaders no longer think of a streetcar as a novelty for tourists.

Instead they see it as an engine for economic development and job creation in the city’s urban core. It would spur real estate development along its route, city planning consultant Steve Jensen said. It would also help major employers such as UNMC and Mutual of Omaha attract the skilled workers they need from elsewhere, he said — and keep young talent in Omaha.

Stothert said she is forming the advisory committee now. She said she hopes its members will come back in no more than six to eight months with specific recommendations on whether or not to go forward with a streetcar, where to put it and how to pay for it.

Stothert said the financial study supports her belief that Omaha could build a streetcar line without raising property taxes.

The financial assessment lays out possible funding methods and ballpark dollar figures. It was done by HDR in association with First National Bank and the Baird Holm law firm.

The options that were considered — which do not add up to $156 million, because they are a smorgasbord of suggestions that could be combined to build and run a modern streetcar — include the following:

» Philanthropic donations, up to $41 million

» City money, from $10 million to $30 million, from sources such as general obligation bonds and redevelopment bonds

» Traditional tax-increment financing, or TIF, in which real estate developers of new projects would put a portion of that tax incentive toward the streetcar

» Up to $40 million from an enhanced TIF district, which would apply to existing properties within three blocks of the streetcar line; proceeds from a portion of increased property taxes from valuation growth believed to be caused by the streetcar would go to help pay for it

» Doubling the documentary stamp tax fee within the streetcar area, from $2.25 per $1,000 of value to $4.50, and designating the increased revenue to the streetcar; totaling about $4 million a year

» A Benefit Assessment District, in which owners of properties within three blocks of the streetcar line would pay a special assessment, could raise about $4.5 million a year initially

» Parking stall fees of up to $10 a month for people who park in surface lots or garages downtown and in midtown could generate up to $4.2 million a year

None of those is set in stone. Some, such as the parking stall fees, would likely be controversial.

Others, such as philanthropic donations and property owner and developer fees, would require buy-in from people who would be expected to pay more.

Many of the funding sources rely on projections that the streetcar would spawn millions of dollars’ worth of development of offices, shops, apartments and other buildings and enterprises.

That could create risk for taxpayers. For example, if the city issues bonds based on increased tax-increment financing payments and the growth doesn’t happen, the bonds would still have to be paid back.

Jensen acknowledged that. But he said the financial assessment’s estimates of economic growth are conservative.

“We feel pretty good about the numbers and how conservative they are,” Jensen said.

Stothert said the advisory committee would weigh the funding options and recommend which are “the best and most acceptable.”

Former State Sen. Heath Mello, who is challenging Stothert in this spring’s mayoral election, has proposed creating a city “infrastructure bank” to combine public and private money for major projects such as a streetcar. He said the city should pursue state funding, such as increased money from gasoline taxes. Money from the state infrastructure bank “is a real possibility,” he said.

And though Mello said federal funding appears unlikely, he said the city should be prepared to take advantage if the Trump administration and Congress launch a major infrastructure initiative.

Derek Miller, the City of Omaha’s long-range and mobility planning manager, said the whole city would bear some cost of the streetcar. But he said the whole city bears the cost of other transportation improvements, too, such as the West Dodge Expressway or the new 180th Street bridge that’s in the planning stages.

“There are tremendous benefits for the entire community,” Miller said.

Midtown 2050 Corp. aims to “maximize midtown’s potential” by connecting its existing corporate and university campuses and neighborhoods, and filling in the blanks between them with new developments built to complement each other and support an urban lifestyle.

The study recommends using an assortment of local funding sources, including city money, philanthropic donations and tax-increment financing from real estate developments along the streetcar route. The study concluded that those who benefit the most from a streetcar could pay the most.

The RideKC Streetcar “has been an amazing catalyst for redevelopment in our urban core area,” said Joe Reardon, president and CEO of the Greater Kansas City Area Chamber of Commerce.

Key players in Midtown 2050 told Ashford they feared that Mayor Jean Stothert would abandon the project if he continued to be involved in the mayor’s race.

Ashford, who is in Sweden, said he doesn’t know what action the board took, though he thinks it’s unlikely he was fired.

In its 100th year, HDR remains rooted in Omaha but continues its global reach

Company leaders will host a ceremony that marks HDR’s centennial and looks to its next chapter, to be orchestrated from a new $113 million headquarters.

Stothert, Mello shifted messages on streetcar after primary, but both say public should have final word

The streetcar proposal has been the subject of a vigorous back and forth, at debates and on the airwaves. But both candidates remain personally supportive of it, and they agree that the public should make the final decision. The real subject of the disagreement is the process they would use to solicit public engagement.

This is one concept of a modern streetcar, as envisioned by the Omaha City Planning Department. 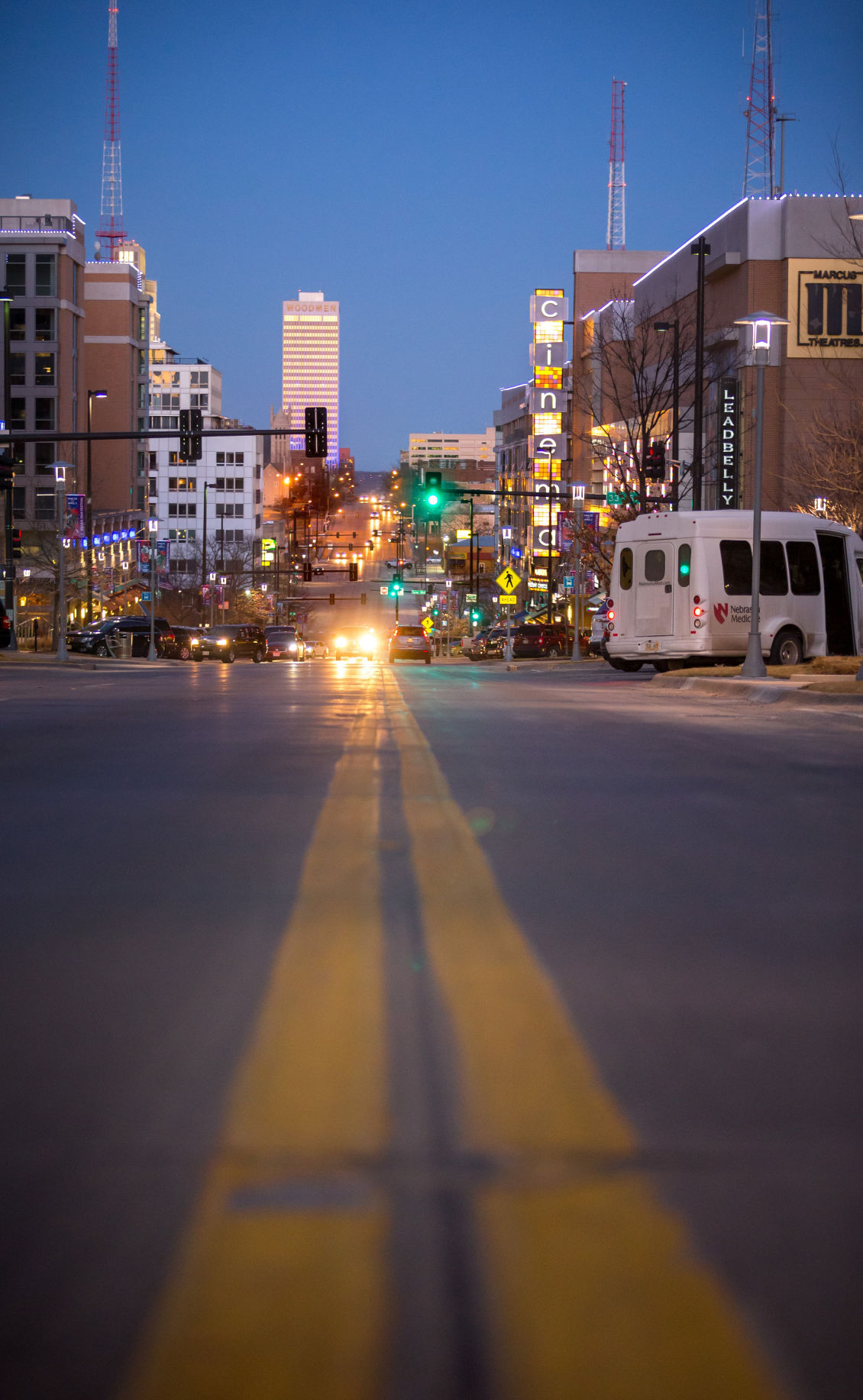 On Tuesday the Omaha City Council will discuss a financial assessment of a proposed streetcar that would run through midtown.