'Back the Blue' rally draws about 2,000; graffiti found in Memorial Park
7 comments
Share this
{{featured_button_text}}
1 of 7 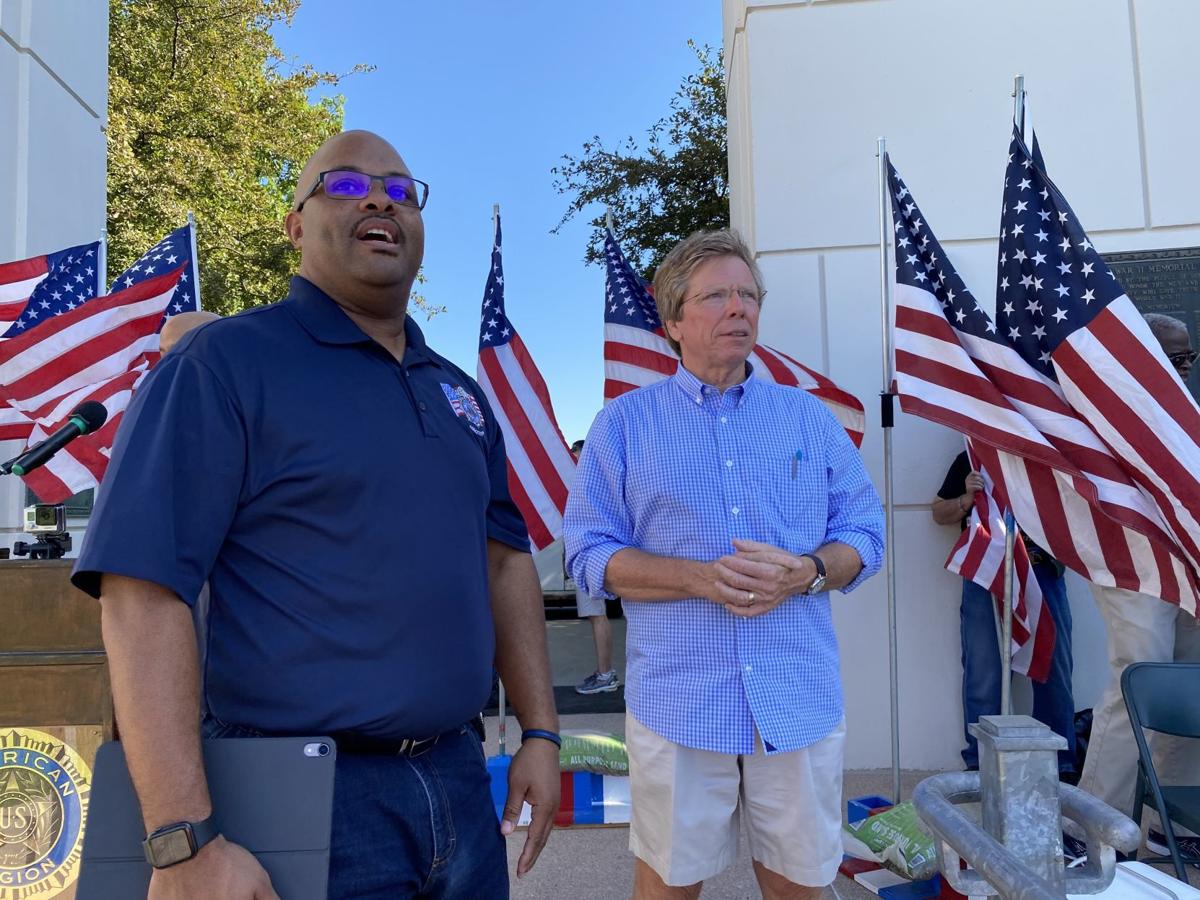 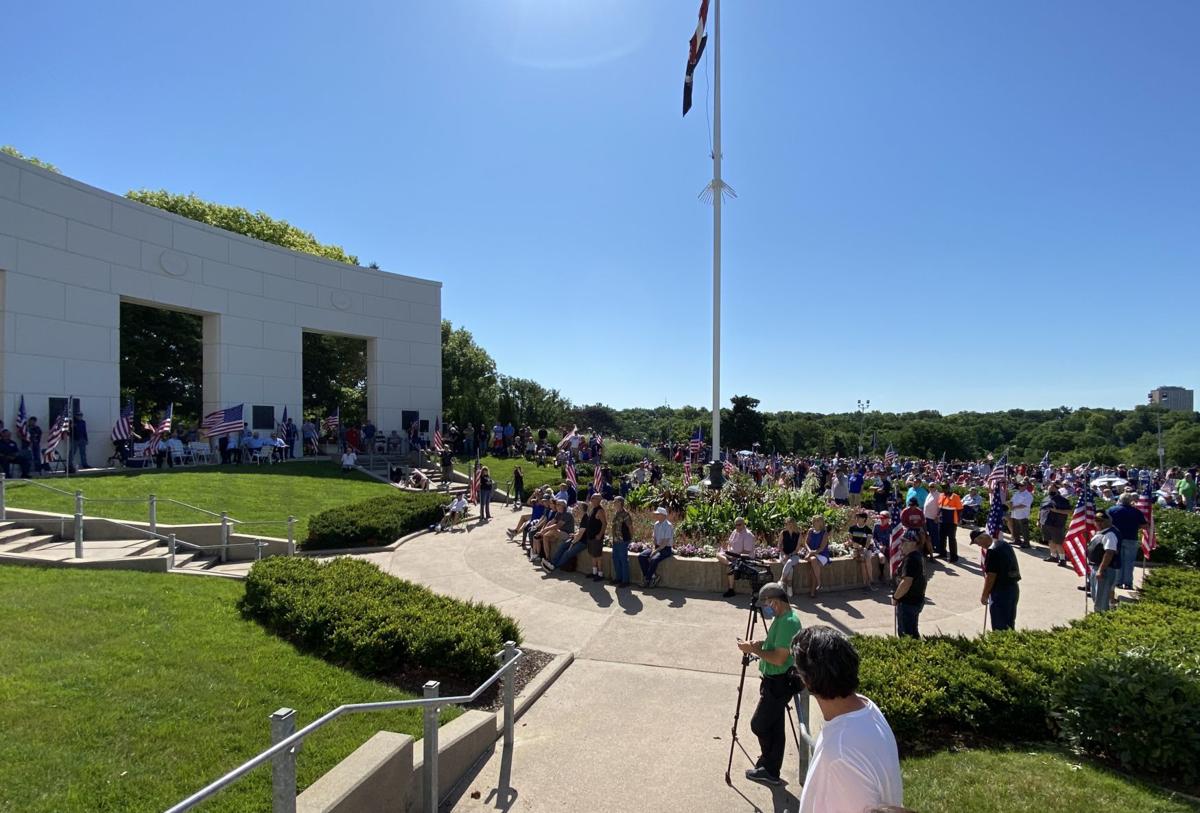 Organizers say a crowd of about 2,000 people attended Saturday’s Back the Blue rally at Omaha’s Memorial Park. 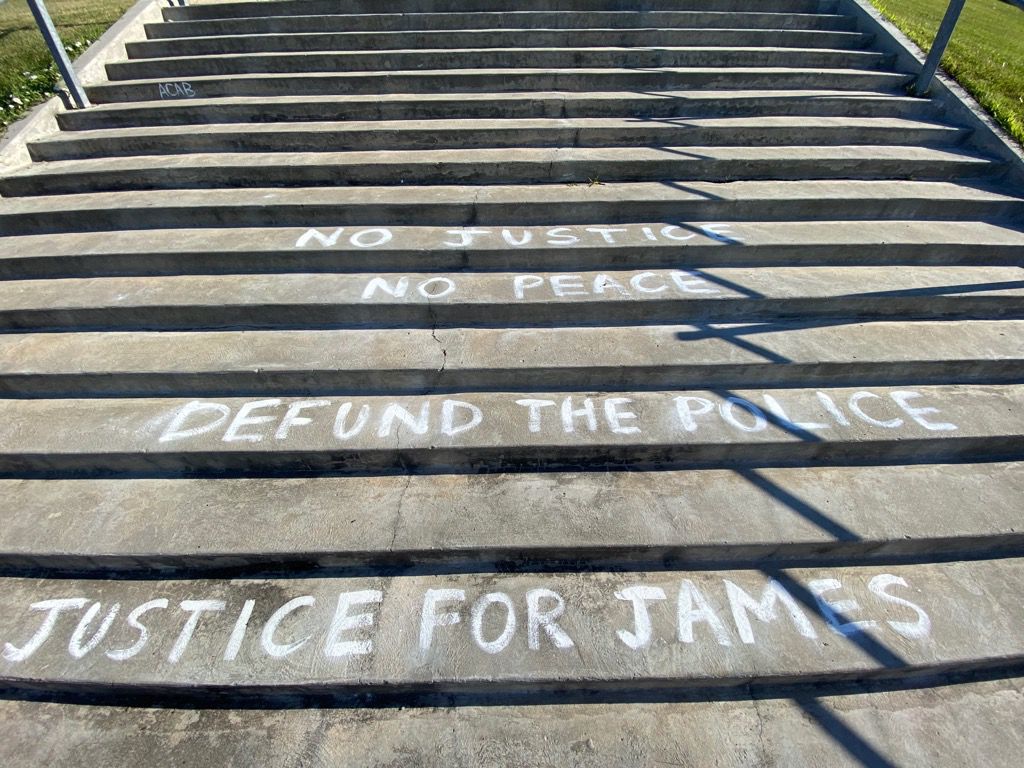 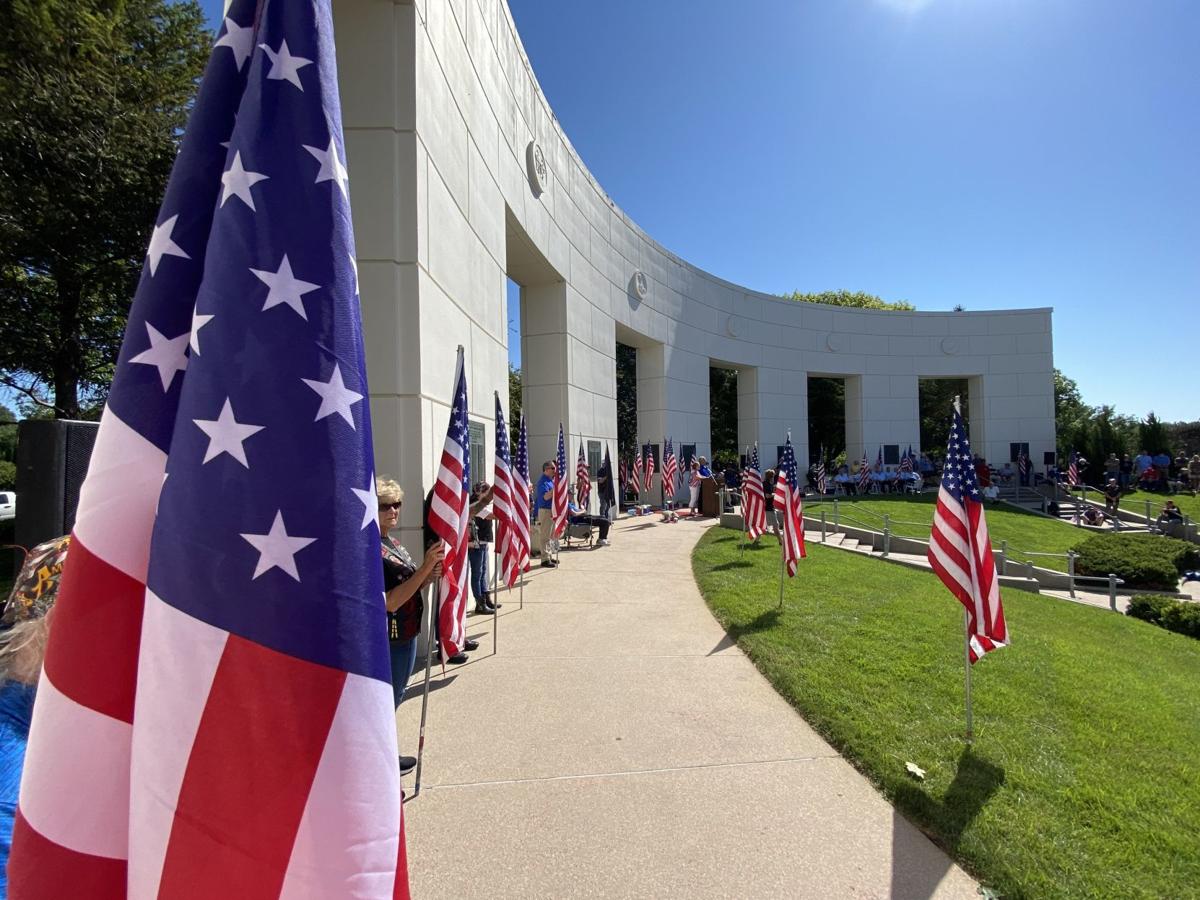 A pair of singers perform during the Back the Blue rally Saturday at Omaha’s Memorial Park. 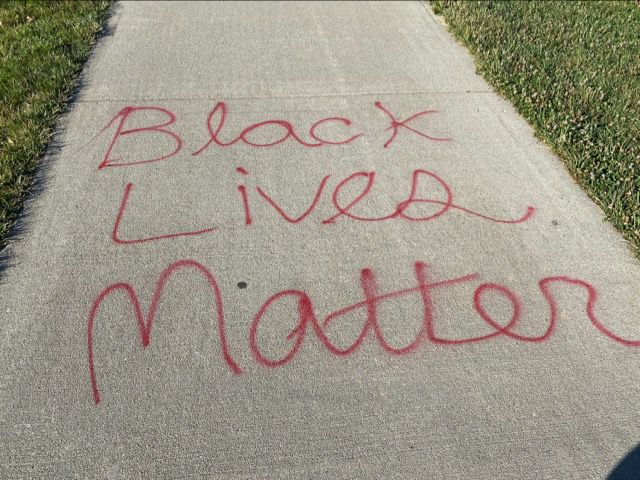 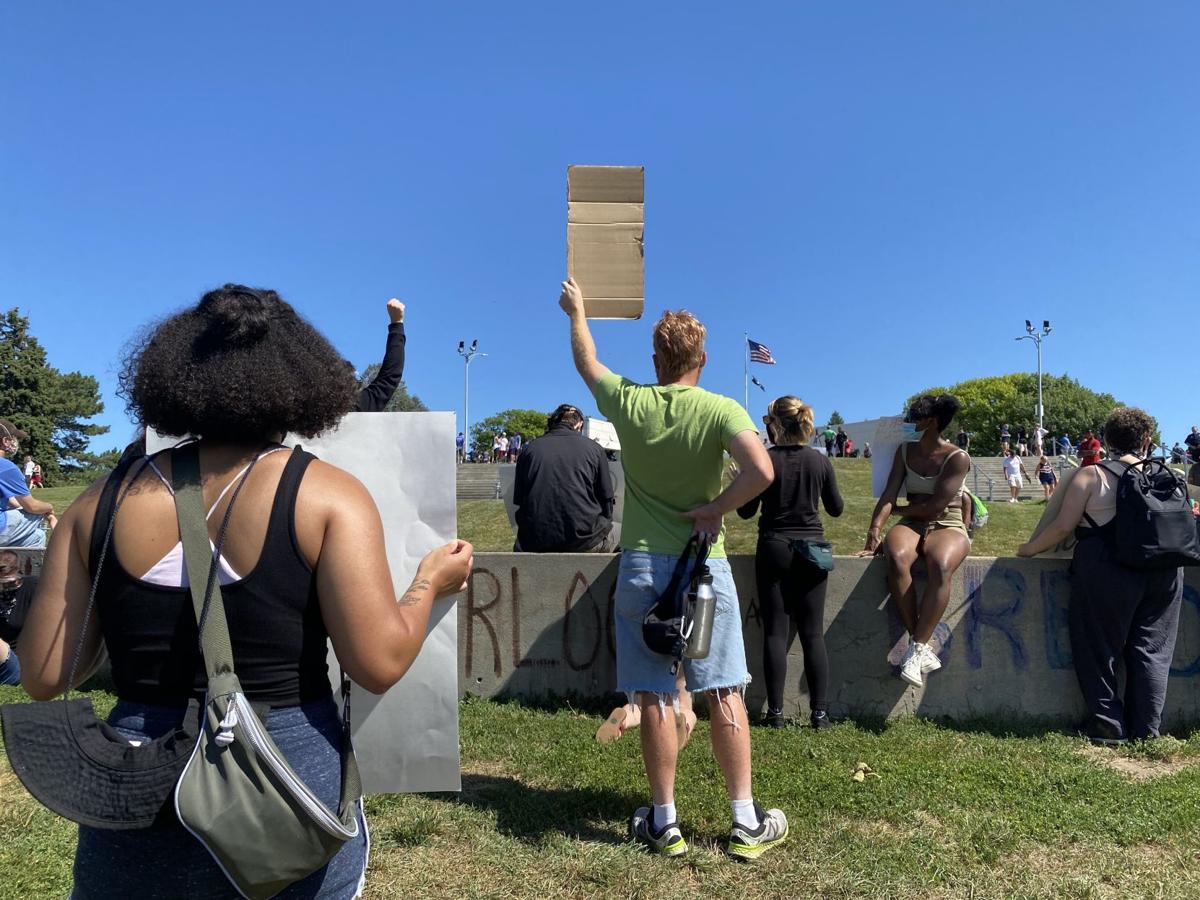 A group of 50 to 75 Black Lives Matter protesters stand silently holding signs as people leave the Back the Blue rally Saturday at Omaha’s Memorial Park. 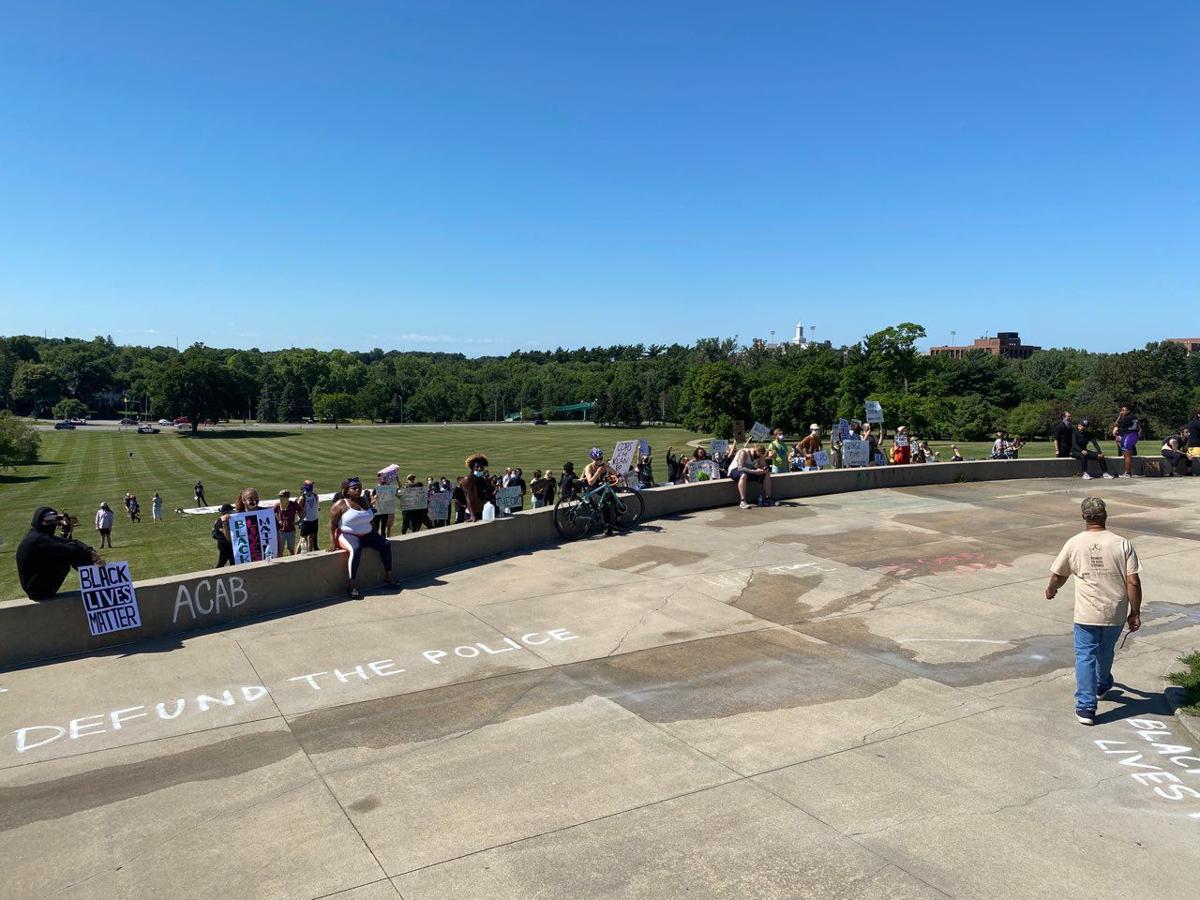 Omaha law enforcement and local leaders who support them pushed back Saturday against a “national narrative” vilifying all police officers for the actions of a few.

A Back the Blue rally drew about 2,000 people to Omaha’s Memorial Park, organizers said, and featured black leaders in law enforcement. Supporters of police said most officers do the job the right way.

Yet some division showed in the park. Up to 100 protesters attended the rally, mainly standing and holding signs in silence.

Graffiti, with messages including “Defund the Police,” “Black Lives Matter” and “Justice for James,” covered some sidewalks and stairs leading to the park’s memorials. The memorials themselves were not damaged, and police are investigating the graffiti, which was reported overnight Friday.

Aaron Sanderford's "Back the Blue" tweets

Police supporter José Foosheé, 63, of Omaha said he doesn’t mind people protesting to correct instances of police misconduct. But he described as “divisive” some protesters’ labeling of police as dangerous to people of color.

He also said he would never support protests where crimes were committed, including vandalism, thefts and attacks on officers, including thrown bottles, bricks and spit.

They declined to give their last names, but Mark said a “few bad apples in every group” shouldn’t spoil the public’s view of the rest, who are doing a difficult job well. His dad retired after a long career in law enforcement, he said, and they have a nephew working now with the Nebraska State Patrol.

Patriot Guard motorcycle rider Bill Ruyf, 63, of Omaha repeated a common line from the Back the Blue supporters, saying he wanted to show people “the silent majority” supports police.

One speaker at Saturday’s rally was Capt. Wayne Hudson of the Douglas County Sheriff’s Office. He said he’s seen a sea change in how officers and the public treat one another.

Hudson said all are trying to reach the same goal, from Black Lives Matter protesters to those rallying in support of police. Everyone, he said, wants to be treated with “dignity and respect.”

In Omaha and Douglas County, he said, law enforcement agencies have spent years building bridges to communities with histories of suspicion of police.

“We all must show compassion,” he said. “We get compassion by humanizing one another.”

Rebecca Barrientos- Patlan spoke for the wives of officers, deputies and troopers. Her husband, Virgil, retired from the Omaha Police Department.

She said protesters need to understand the day-to-day fear spouses feel about sending a loved one off to do their job.

“When you see a police officer on the street, please see the person,” she said.

She wiped away tears as she said a stranger’s kindness, a woman bringing bottled water to officers during the protests so they wouldn’t get dehydrated, made her feel valued again.

During the two-hour rally, a group of Black Lives Matter protesters gathered at the foot of the Memorial Park steps. Most declined to give their names. One protester, Riley, 20, said she valued Back the Blue’s right to gather in support of police, but said she has “friends (who are) suffering” at the hands of police.

She said she wants people to understand the pain and reality of racial profiling and the dangers that racial assumptions cause for people of color.

Robert Wagner, 44, held a sign calling on City Prosecutor Matt Kuhse to charge former bar owner Jake Gardner, who is white, in the May 30 fatal shooting of James Scurlock Jr., who was black, during protests in the Old Market. He and others have questioned why Gardner hasn’t faced firearms-related charges.

Wagner said he wanted to demonstrate silently to show support for Scurlock without disrespecting the rights of others to gather peacefully.

One person was arrested at Saturday’s rally for refusing to leave, Omaha police said. A video circulating on social media shows an officer telling a protester that his conduct was disorderly. The video showed officers handcuffing the man and leading him away.

Lt. Sherie Thomas, a police spokeswoman, could not confirm whether the man shown on the video was the person arrested.

Retired Omaha North High School Principal Gene Haynes spoke at the rally, saying Omaha should understand that “we are living in a very challenging society.”

He said he’s supportive of “the men and women in blue” because of his experiences, including working with school resource officers at North High.

“It’s not only black lives (that matter),” Haynes said. “Every life matters.”

He also said there’s “nothing more reckless” than lawmakers responding to emotion instead of facts. He said 95% of people shot by police are shot while attacking officers.

The Back the Blue rally was organized by Bill and Evonne Williams, who led several honor flights for veterans to war memorials in Washington, D.C.

Check out some our favorite staff images from July 2020.

A Creighton University professor has apologized for saying that a support-the-police rally in Omaha will be an exercise in white supremacy.

On Saturday, a “Back the Blue” rally is scheduled at Memorial Park in Omaha.

The hourlong event, which will include speakers and singing, will be held at Omaha's Memorial Park.

A day of rallies and remembrance in Omaha: Crowds gather to call for equality and peace

Roughly 200 people attended a rally at Memorial Park, which ended with a march into Elmwood Park. And a prayer vigil for James Scurlock was held in the early evening at 24th Street and Camden Avenue in North Omaha.

Old Market businesses weigh when to pull down boards, need people to help them 'bounce back'

Owners, residents and volunteers began prying the boards off windows in Omaha’s Old Market this week, inching toward reopening. But they can't predict what the coming days will bring.

The front lawn and steps of Central High School were filled with masked faces as speakers at the youth-organized rally asked OPS to remove school resource officers from the district’s schools.

An Omaha Police Department amnesty event collected 55 guns and at least 1,000 pounds each of ammunition and fireworks Saturday morning.

The men’s-only organization has been called extremist and a hate group by civil rights groups. The Proud Boys dispute those labels.

So far, 53 inmates and 35 employees and contractors have tested positive at the Douglas County Jail.

Organizers say a crowd of about 2,000 people attended Saturday’s Back the Blue rally at Omaha’s Memorial Park.

A pair of singers perform during the Back the Blue rally Saturday at Omaha’s Memorial Park.

A group of 50 to 75 Black Lives Matter protesters stand silently holding signs as people leave the Back the Blue rally Saturday at Omaha’s Memorial Park.