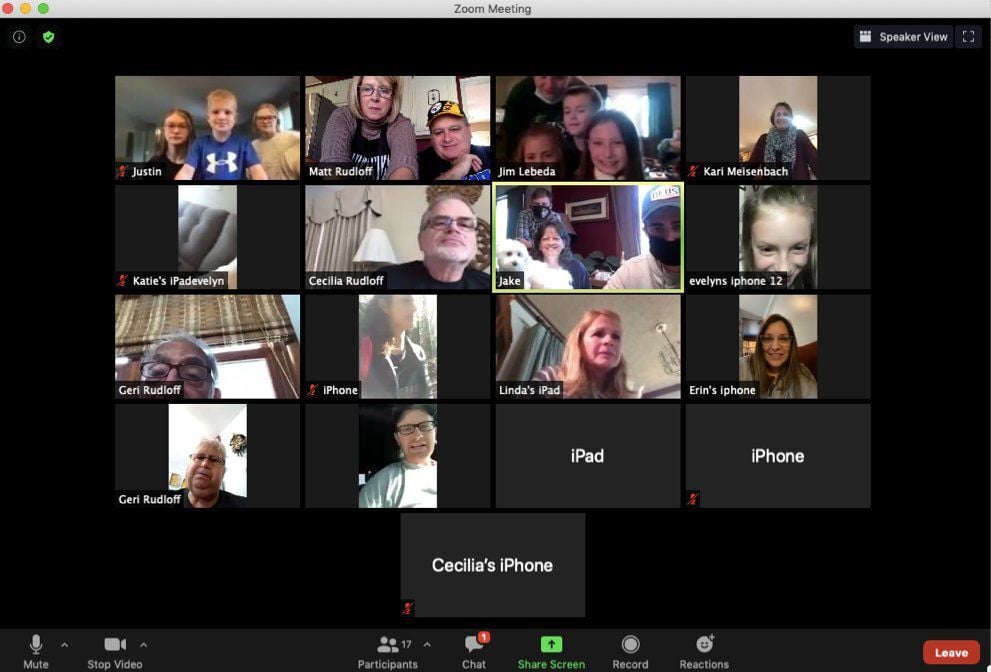 Howard Rudloff’s large family typically gathers at his home in the Keystone neighborhood of Omaha. But because of the pandemic, they decided to stay physically separate on Thursday. The relatives still came together in large numbers — just online with a Zoom video chat. 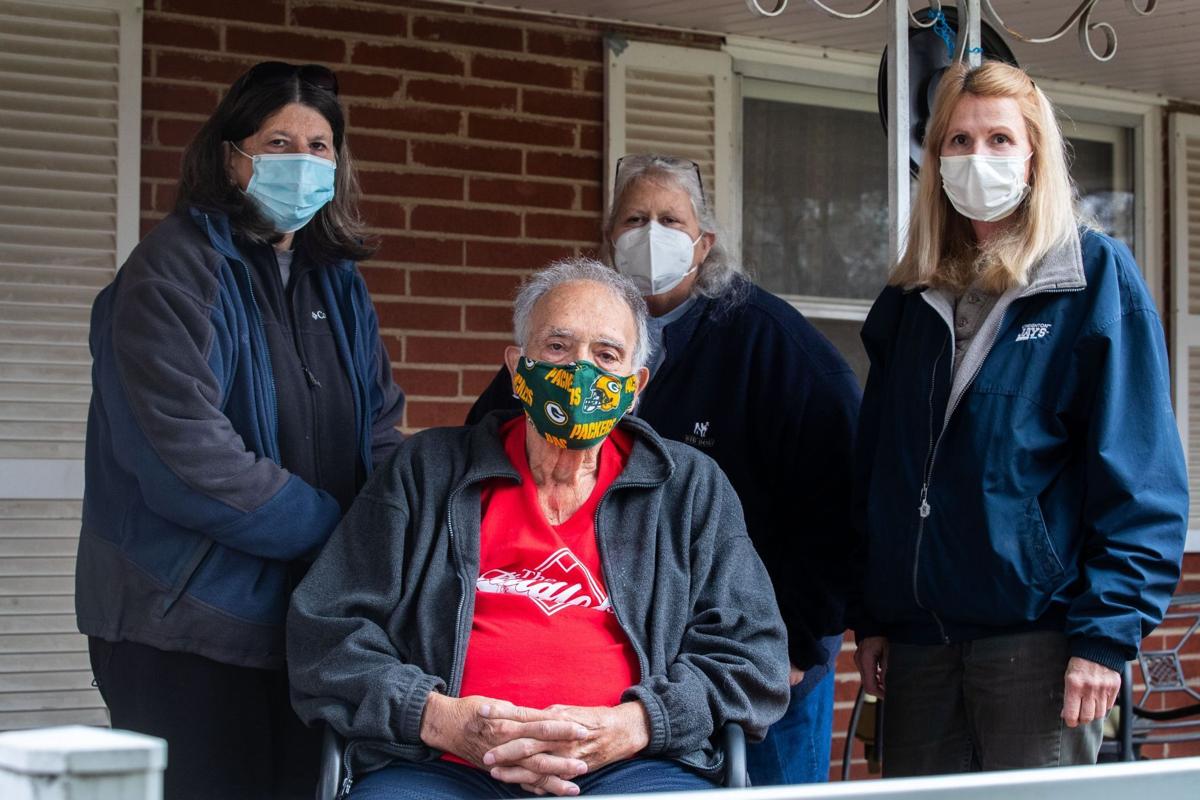 Howard Rudloff decided to forego the family's large Thanksgiving gathering this year to be safe. Here Rudloff is seated with three of his daughters, Cindy Lebeda, left, and Lindy Jacobsen, right, and Geri Rudloff on the front porch of Rudloff's Keystone home.

But this year, the family decided to stay physically separate to be safe in the time of coronavirus. In Rudloff family style, the relatives came together in large numbers — just online with a Zoom video chat.

“We just know we’re blessed,” daughter Sherri Petersen said, “and we’re happy to be able to get together any way we can.”

For many people, the most traditional of holidays underwent a completely non-traditional makeover this year.

First vaccines could arrive in Nebraska by mid-December if all goes well, Ricketts says

The huge Thanksgiving spread was out in favor of smaller meals of the same flavor.

Though some people went against public health advice, many big gatherings gave way to small individual households staying in.

People called on the phone and chatted on Zoom and masked up and stepped outside and saw their loved ones through the separation of a screen door. They gave thanks for each other through the simplicity of a short visit, not over a shared meal.

Howard Rudloff, the patriarch of a family whose roots dig deeply into Omaha, approved the separation this time. In normal circumstances, the Rudloff home in Keystone would have held its 61st consecutive Thanksgiving gathering.

Rudloff is 88 now, and though he’s led an athletic life, he’s experienced health problems of late, as have other family members. He cited the saying that stems from Shakespeare to explain his thinking: “Discretion is the better part of valor.”

Rudloff acknowledged some sadness in the decision to not physically gather for Thanksgiving. But he also said Thursday was only one day of people’s lives, and it’s better to not make mistakes that spread the virus.

“We have to be prudent and not be running all over,” Rudloff said. “This disease is nothing to jack around with.”

To understand the family’s sacrifice, you should understand what has grown out of the marriage of Howard and his late wife Bette, who died in 2007.

Howard and Bette had eight children, named in rhyme except for the youngest: Cindy and Lindy, Kim and Jim, Geri, Sherri and Kari, and Matt.

They’re a tight-knit family, for sure. All eight siblings live in the Omaha area, and the extended, still-growing family mostly lives close, too. The family long fielded its own slow-pitch softball team and even held its own family golf tournaments. The siblings still connect often like the good friends they are.

Thanksgiving is a family event.

Bette would wake at 3:30 a.m. to start cooking the Thanksgiving meal. As soon as a plate was hot and ready, she would eat, even if it was more like a 9 a.m. Thanksgiving breakfast.

The traditional gathering time became 11 a.m. But if you showed up then, you were a half hour late.

That allowed the array of family members to join an early gathering, then have time in the afternoon to see the rest of their family. Or stop in at the Rudloff home whenever you could.

So many people would show up, the family would get a city permit so they could park cars in the No Parking zone along Keystone Park, Howard said.

The Thanksgiving chaos is far from the Norman Rockwell painting. But it’s family.

“It’s not elegant,” daughter Lindy Jacobsen said. “It’s not everybody sits at the same table. Or the glassware and all that stuff. It’s very simple.”

Throughout the pandemic, the Rudloff family has adjusted. Howard’s children wear masks when they visit their father. A few younger family members have caught COVID-19 but recovered.

The family has scaled back other holidays, too. For Howard’s 88th birthday this summer, the family organized a drive-by greeting past his home.

Said Lindy, “We turn it into a positive.”

Howard said he feels good about his computer skills, having completed an online tax preparation course last summer from his desktop.

At noon, the family held a Zoom chat that connected the satellite family gatherings.

Daughter Kari Meisenbach organized the chat and, once it started, asked if people should take turns talking. But Lindy said it wouldn’t be an authentic Rudloff family holiday without multiple people trying to talk at the same time.

Said Sherri Petersen, “It has to be chaos, whether it’s online chaos or in-person chaos.”

Around a few awkward pauses in the talking and video feeds cutting out at times, some 40-plus family members connected online.

At the Rudloff home, cleanup sure was easier.

Rudloff himself said he noticed the quiet of the day. But he said “that Zoom thing” went well — although he hopes to not do that again in the future.

“It’s nothing like having them here. But it is a substitute, and you have to make the best of everything.”

Thanksgiving, Black Friday will be sunny, mild in the Omaha area

Sunny, relatively mild weather is on tap across the region through Saturday, said Brett Albright, meteorologist with the National Weather Service.

learn about scouting and help their communities by participating in a give-back event near them.

If you attended holiday gatherings, consider getting a COVID test, health officials say

In Douglas County, nearly 3 out of 10 people tested last week were positive for the virus, according to the Health Department.

Howard Rudloff’s large family typically gathers at his home in the Keystone neighborhood of Omaha. But because of the pandemic, they decided to stay physically separate on Thursday. The relatives still came together in large numbers — just online with a Zoom video chat.

Howard Rudloff decided to forego the family's large Thanksgiving gathering this year to be safe. Here Rudloff is seated with three of his daughters, Cindy Lebeda, left, and Lindy Jacobsen, right, and Geri Rudloff on the front porch of Rudloff's Keystone home.