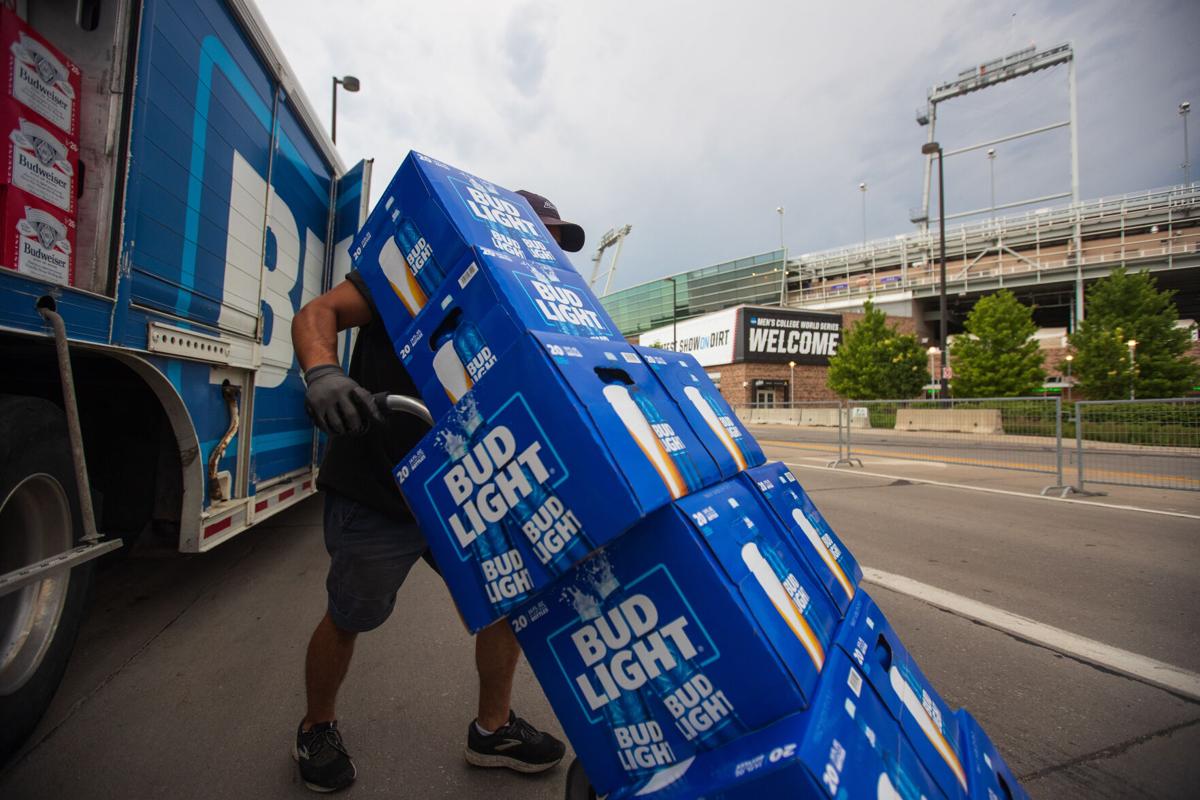 A beer delivery is made across the street from TD Ameritrade Park on Friday. The CWS will serve canned beer only this year as a COVID precaution. Draught beer should be back next year. 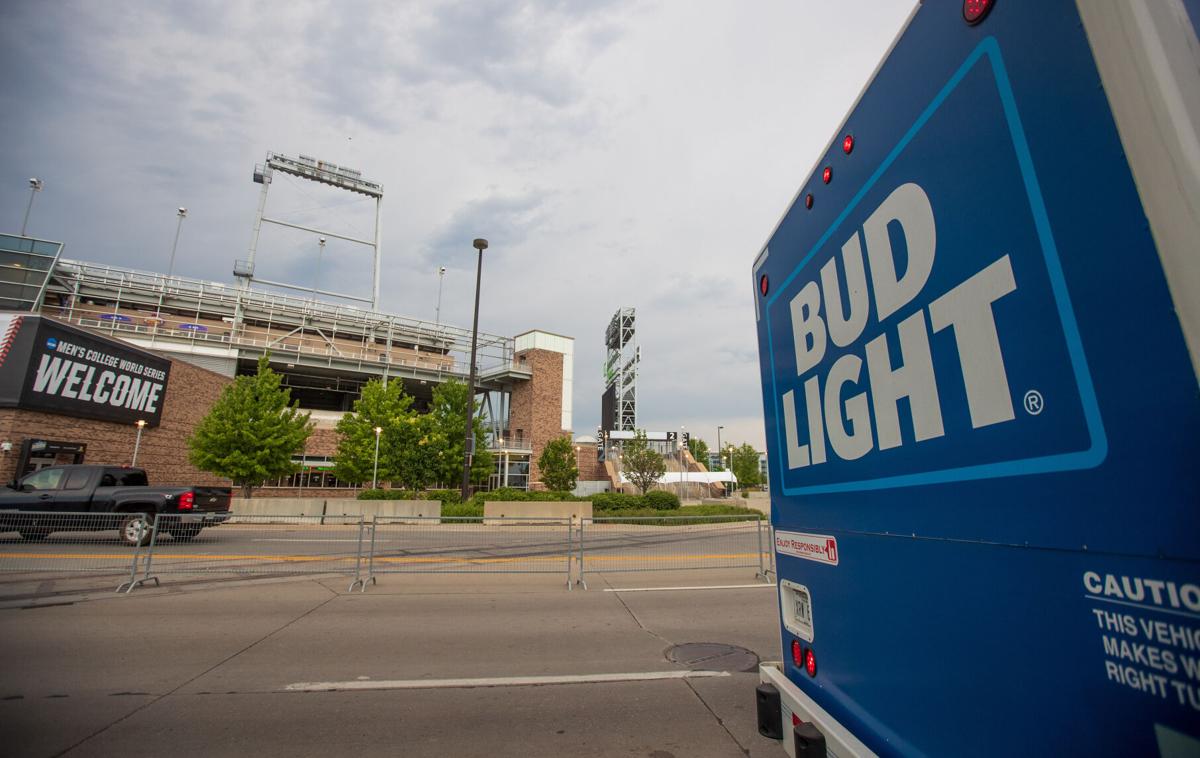 The College World Series will serve canned beer only this year in an effort to limit “touch points” amid the pandemic.

The beer won’t exactly be flowing inside Omaha’s TD Ameritrade Park this year, but fans should have no problems scoring their choice of adult beverage.

As part of the COVID-19 precautions inside the park, vendors this year are ditching draught beer and will exclusively serve canned beers, ciders and seltzers.

The decision to temporarily drop kegs in favor of cans is a small part of a broader industry trend spurred by the pandemic as people increasingly imbibed at home, rather than at bars and restaurants.

That transition from barstool to couch has caused some supply chain issues in the U.S., but local venue operators, beer suppliers and brewers all say there shouldn’t be issues supplying the College World Series.

In fact, the switch to canned beer could benefit local craft brewers, who have been incorporated in the CWS since 2018 — two years after the NCAA started allowing the sale of alcohol to fans in general seating.

“You have to look at the exposure element,” said Lea Watson, director of business development Pint Nine Brewing Co. in La Vista.

Pint Nine, one of six local beer or cider makers available inside TD Ameritrade this year, has been at the CWS since 2018. In their two years at the CWS, Watson said the craft beer makers were stationed at one location inside the ballpark, and they served draught exclusively.

With the switch to all cans this year, the local options will be available at multiple locations throughout the ballpark, including some food carts.

Though canned beer carries a higher production cost for the brewers compared to draught, cans bring greater awareness to brand and types of beer.

Watson said Pint Nine has not suffered from the ongoing aluminum can shortage that has plagued the beverage industry, particularly smaller companies, during the pandemic.

The shortage led the president of the Brewers Association, a trade group that boasts more than 5,300 brewery members in the U.S., to send a letter to can manufacturers pleading for them to address supply chain issues and increase transparency.

“Our members report that the news on aluminum can supply is worsening, with some allotments representing as much as a 40-percent reduction in supply,” Brewers Association President and CEO Robert Pease wrote in the February letter.

Bus, bike, automobile: Your guide to getting around the CWS

The imbalance between supply and demand led manufacturers to abruptly cancel some breweries’ can orders in the first quarter of 2021, Pease added. Others were told they would not receive cans until the second quarter.

“These businesses will simply not survive that long without cans,” Pease wrote.

Pint Nine has avoided the issue largely because it uses 16-ounce cans, rather than more commonly used 12-ounce cans, and it partners with a neighboring brewery on aluminum can orders, according to Watson.

It doesn’t appear the ongoing can conundrum will have much impact on the CWS.

“We’re loaded up and should be in good shape for the series,” said Bryon Zechmann, vice president of marketing at Premier Midwest Beverage, a local distributor whose products include national brands, such as Miller and Coors, and local companies like Brickway Brewery and Distillery and Lucky Bucket Brewing Co.

The pandemic has posed its share of challenges to the beverage industry, Zechmann said. But in the case of the CWS, Premier was given plenty of advance notice about the switch from draught to cans, which allowed it to coordinate with suppliers to ensure there is enough beer for the ballpark and other customers, such as bars and restaurants.

Taste of home runs: Chefs focus on classics for CWS food this year

“It shouldn’t be an issue at all,” Zechmann said. “Our warehouse is full.”

The Metropolitan Entertainment and Convention Authority, which manages TD Ameritrade Park and the CHI Health Center, decided to switch to cans exclusively when it reopened its venues, said Kristyna Engdahl, director of communications for MECA.

The decision stemmed from conversations between Levy Restaurants, the caterer inside MECA venues, and Douglas County Health Department officials. The idea is to limit what Engdahl called “touch points.”

It should also reduce the amount of time vendors are handling each drink. It’s easier to grab a can, open it and hand it to a person than it is to grab a plastic cup — while wearing a plastic glove — and slowly fill it with draught beer.

The move is expected to be temporary. Engdahl said draught beer should be back in the stadium for the 2022 College World Series.

“In the meantime, the beer will still be cold,” Engdahl said.

Videos: Everything you need to know about 2021 College World Series

Beers, ciders and seltzers at 2021 CWS

COVID cases are down and vaccinations help protect fans attending the College World Series. But experts note that the pandemic is not over, and the crowded ballpark won't be risk-free.

Omaha, Sports City, is coming alive again this week, after more than a year of COVID-19 shutdowns and stress. More than 50,000 people total could attend the CWS and the Swim Trials on Saturday.

Cleaning Omaha's TD Ameritrade Park typically takes a crew of 50 or more about eight hours after the last College World Series game of the day.

A majority of vendors say that Mississippi State brought the most fans. Dawgs fans — and other fans — are all ready to shop.

How hungry and thirsty were the crowds at this year's College World Series?

A beer delivery is made across the street from TD Ameritrade Park on Friday. The CWS will serve canned beer only this year as a COVID precaution. Draught beer should be back next year.

The College World Series will serve canned beer only this year in an effort to limit “touch points” amid the pandemic.