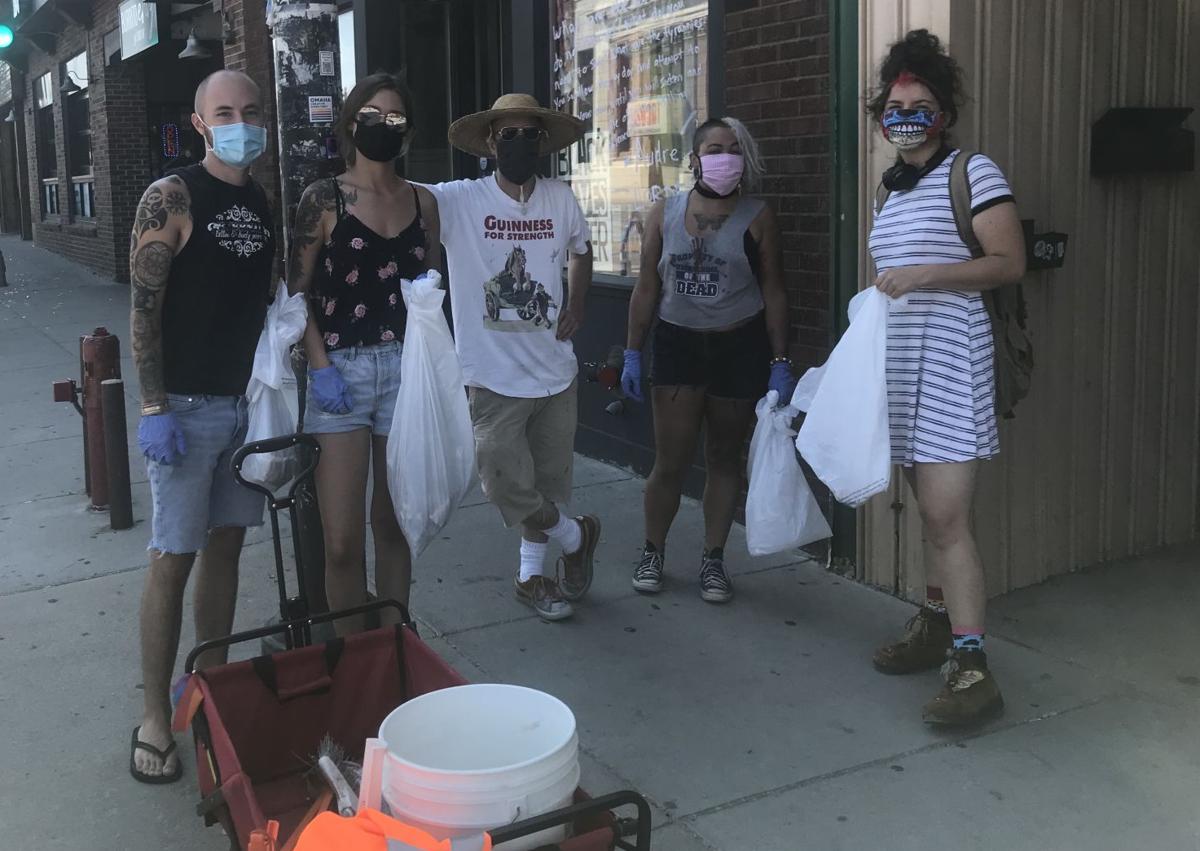 Justin Schacht, McKenna Nordbrock, Todd McCollister, Ginger E. and Mell Horgan are some of the members of the Benson First Friday Green Team. 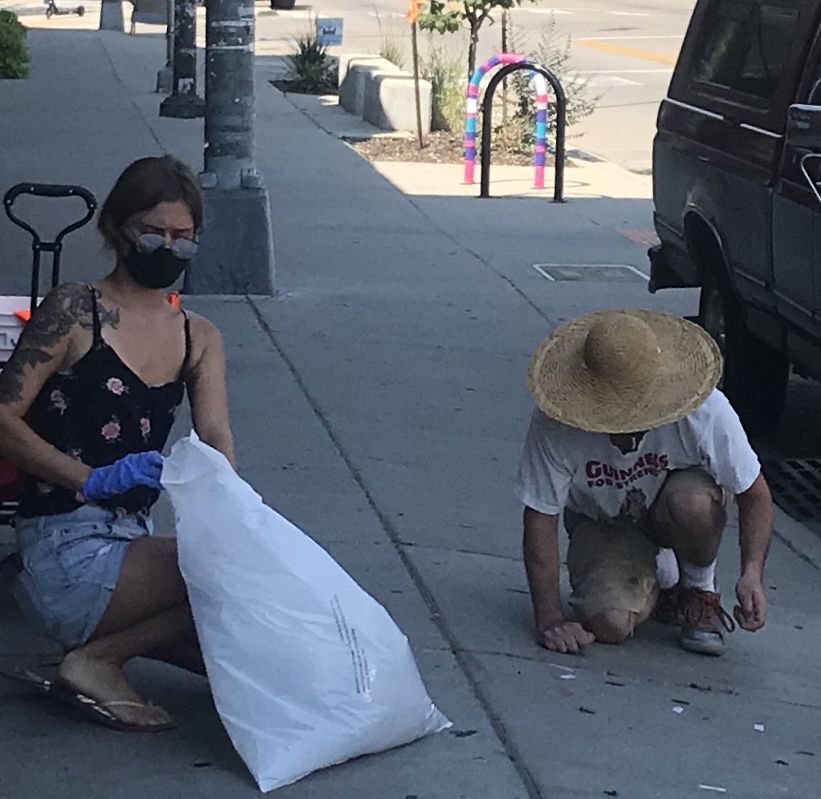 McKenna Nordbrock and Todd McCollister pick up litter on a Benson sidewalk on Sunday. 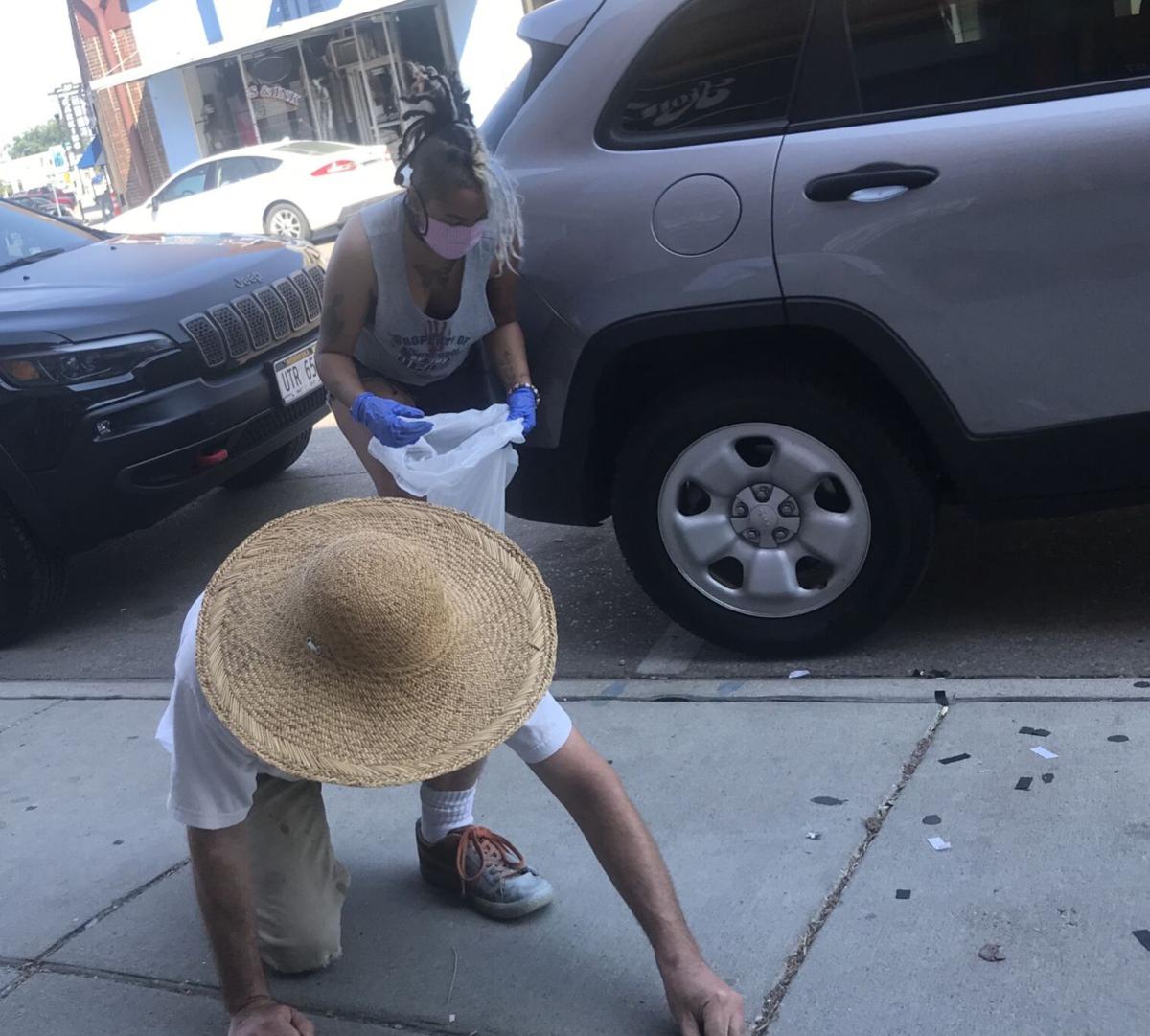 If McKenna Nordbrock had to guess, the glitter and confetti strewn along the sidewalks of the Benson business district Sunday morning probably came from a bachelorette party the night before.

“That would be my guess,” Nordbrock said, holding up one of thousands of small silver stars near 62nd and Maple Streets. “We see everything. We see a whole lot of shooters (small plastic liquor bottles) and cigarette butts.”

Starting in late May, Nordbrock and other members of the Benson First Friday Green Team have gathered every other Sunday to clean up trash in Benson. They meet at 11 a.m. outside Petshop at 2725 N. 62nd St., a shared creative space with galleries, studios, offices and event space.

The Green Team loads a red wagon with garbage bags, brooms, long-handled grabbers and other cleaning supplies. Then they move slowly and steadily up and down the streets of the Benson business district, picking up litter as they go.

Sometimes they muse about who made the mess: “Every litter tells a story,” Todd McCollister said. Mostly, they quickly and quietly go about the business of tidying up the area.

“Thanks for doing that,” a dad yells from his bicycle as he rides down the sidewalk followed closely by his wife and kids on their bikes. Other passersby, some with steaming cups of coffee in their hands, also offer their thanks.

“We get a lot of people and business owners thanking us,” Justin Schacht said. “We’d like to see this happening not only in Benson but in all the neighborhoods.”

The project is supported by the Omaha Neighborhood Grants program, a program of the Omaha Community Foundation. Joe Pittack of Ted & Wally’s at 6023 Maple St. said he heard about the grant and was happy to contribute about a dozen trash grabbers.

“We’ve been involved with BFF in one way or another over the years,” Pittack said. “We love supporting them as their actions make our community more creative and inclusive.”

Just five team members were on hand for the litter patrol Sunday. A decision was made to limit the cleanup effort to going down one side of Maple and back up the other.

Other times, when as many as 15 people show up, the team spreads out to cover the alleys and side streets. Volunteers can check out Facebook and Instagram to get more information and to sign up.

“The age demographic of our volunteers is somewhat on the younger side, but there are older people that come out to help as well,” Nordbrock said. “Then there are people, passersby, who see us and they just join us. You don’t have to sign up.”

Mell Horgan regularly volunteers for cleanup duty because she believes residents should take pride in the neighborhood.

“Especially Benson,” Horgan said. “We want to keep it local and friendly. Everyone has to do their own small part.”

As Schacht swept up piles of plastic confetti along the Maple Street gutter, he talked about the environmental impact even small pieces of debris have. Plastics blow into creeks that merge with rivers and eventually flow into the ocean, he said.

“You can see what just five people can do in just 15 minutes,” he said. “Imagine if we had a whole community doing this. Our city would be a whole different place.”

Omaha police say the increase of violence in the Benson neighborhood is part of recent citywide uptick in violence.

How about some ice cream with a Cajun meal? Taste of New Orleans will share Ted & Wally's Benson location.

In big transformation, Mulhall's seeks to become 'a hub' for Omaha nature lovers

Mick Mulhall said the changes are aimed at helping the environment and forming "a hub" for "people who care about plants and plant things and pollinators and gardening and getting outside.’’

The group formed after the Nebraska Environmental Trust's board voted to defund a handful preservation projects and instead designate $1.8 million for ethanol blender pumps for gas stations.

More than 50 people came out to help pick up litter Saturday afternoon starting at 24th and Grace Streets and moving north a little over half a mile to 24th and Locust Streets.

Lydia and Carlos Tibbs were an inseparable duo known for their joyful embrace of life and of the people they met. "They covered you with their love."

Omaha’s Benson neighborhood provides a great example of community spirit with the work of the Benson First Friday Green Team.

Justin Schacht, McKenna Nordbrock, Todd McCollister, Ginger E. and Mell Horgan are some of the members of the Benson First Friday Green Team.

McKenna Nordbrock and Todd McCollister pick up litter on a Benson sidewalk on Sunday. 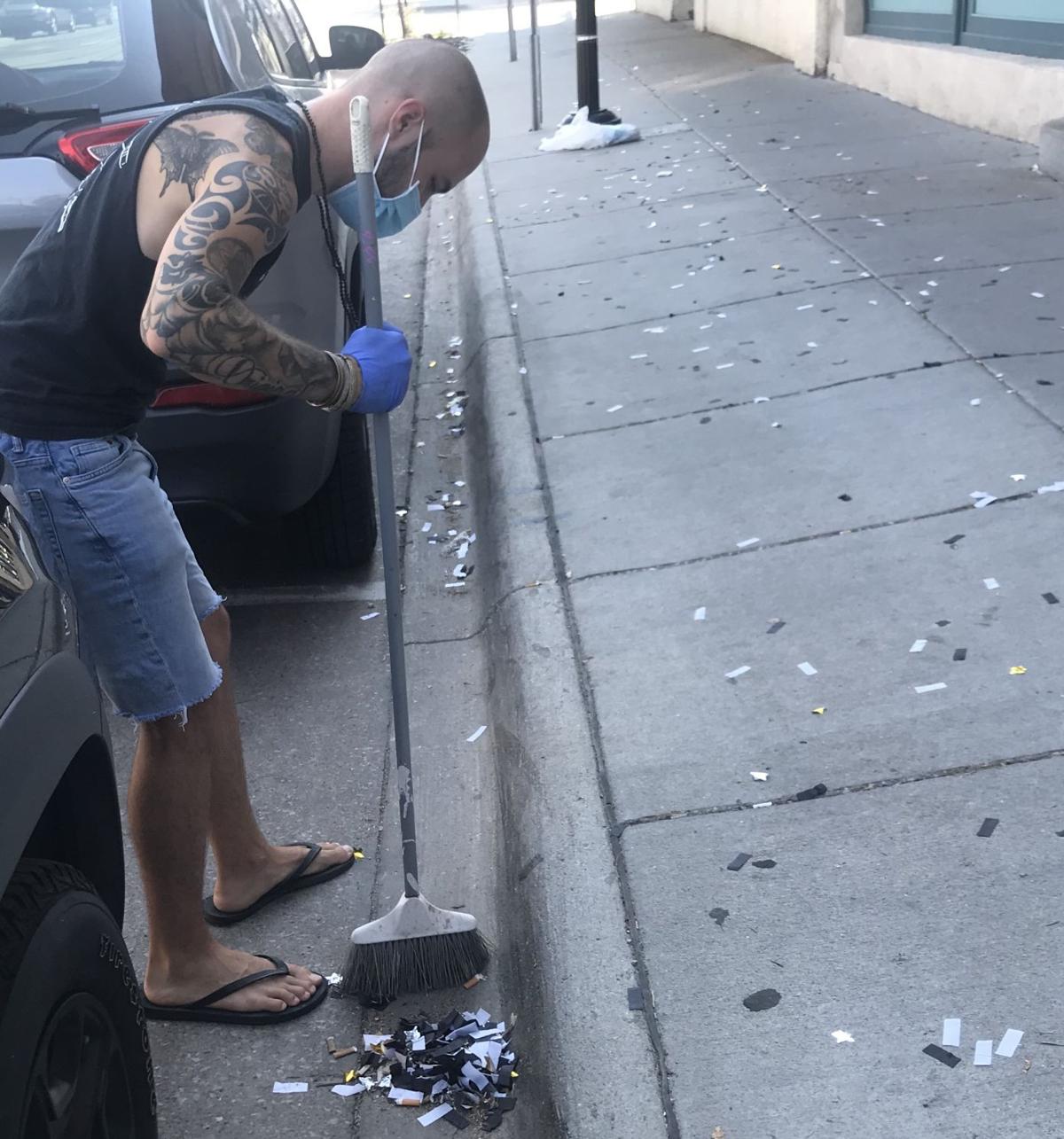 Justin Schacht sweeps up litter along Maple Street. “You can see what just five people can do in just 15 minutes,” he said. “Imagine if we had a whole community doing this. Our city would be a whole different place.”