A dredger sits in the Riverfront Marina south of the Bob Kerrey Pedestrian Bridge.

Taking up its station within the Missouri River inlet last week, the machine will continue to grind and suck up sediment that infiltrated the small area during the 2019 flood.

The flooding “pretty much filled that marina up with sand and silt,” said Jake Lindner from the Omaha Parks Department. He added that the flooding also slightly damaged the docks encompassing the inlet.

Dredge America, which is based in Kansas City, Missouri, was awarded the contract for dredging the marina at a cost of $446,375. The Federal Emergency Management Agency is set to cover 95% of the project’s costs. The city will cover the remaining 5%.

Lindner said the dredged material will go back into the river and flow downstream. He added that the dredging crew already had removed 5 feet of sand from the marina. Overgrown vegetation also will be cleared.

The dredging at the Riverfront Marina is expected to last another three weeks. Lindner said the work had to wait a bit so as to not interfere with the spawning period of the endangered pallid sturgeon.

Once the project is completed, the Metropolitan Entertainment and Convention Authority will manage the marina along with other parts of Lewis & Clark Landing. In an email, MECA spokeswoman Kristyna Engdahl said the marina will reopen along with the rest of Lewis & Clark Landing in 2023. The crown jewel of the landing’s renovation will be the $101 million science center.

The Lewis & Clark Landing renovation is part of a $400 million riverfront revitalization initiative that includes the recently renovated Gene Leahy Mall and the ongoing renovation of Heartland of America Park. Heartland also is expected to reopen next year.

Other components of the Lewis & Clark Landing renovation include four sand volleyball courts with nearby green space and shade structures, a scenic boardwalk, an urban beach that will include fire pits and a playground.

The 2019 floods also damaged the marina at N.P. Dodge Park north of the Mormon Bridge. Lindner said work also is being done to fix that marina.

This fall, work will begin to restore the creek banks that were damaged by the 2019 floods at the Knolls Golf Course in northwest Omaha. Lindner said the projected cost to restore the banks is just under $4 million. He said FEMA and the city will split those costs at the same ratio as the Riverfront Marina project.

The wait is over. Omaha's Gene Leahy Mall is now open to the public

Omaha's iconic downtown park reopened to the public Friday with a ribbon cutting to mark the occasion. 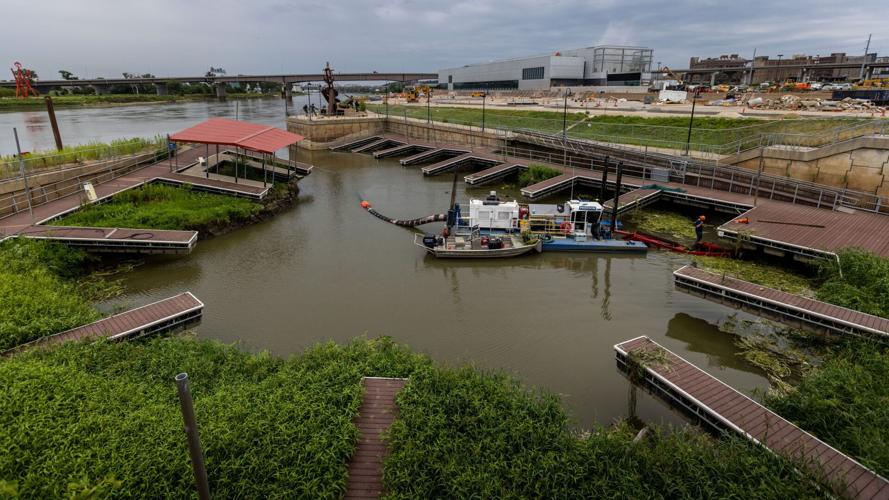 A dredger removes sand and silt from the Riverfront Marina south of the Bob Kerrey Pedestrian Bridge. The sand and silt swept into the marina during the 2019 Missouri River flooding. 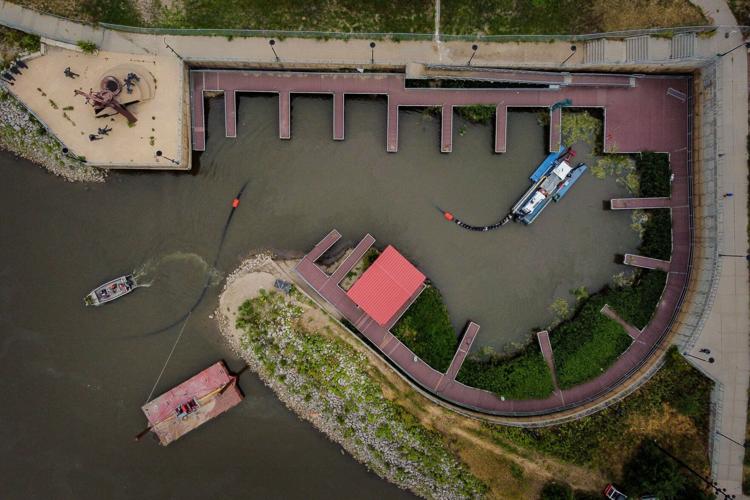 An overhead view of the dredger that is removing sand and silt from the Riverfront Marina south of the Bob Kerrey Pedestrian Bridge. The Federal Emergency Management Agency project began last week and is expected to last another three weeks.