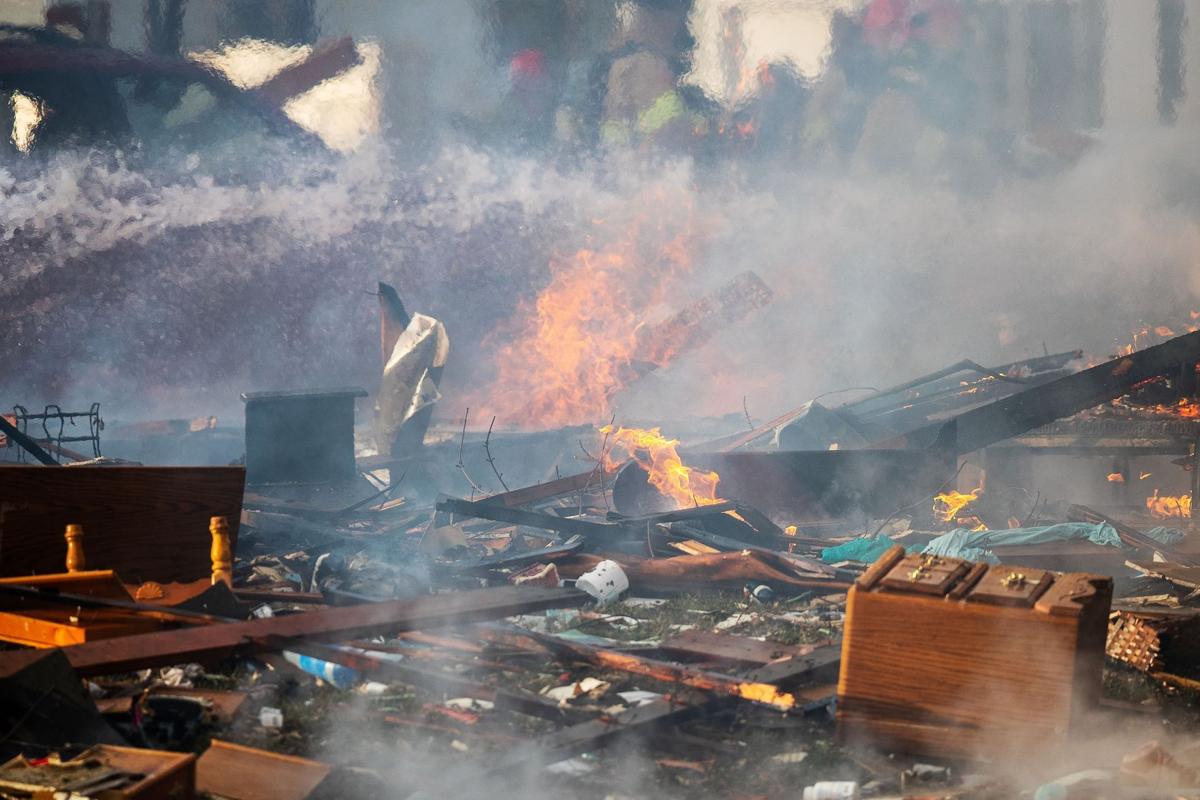 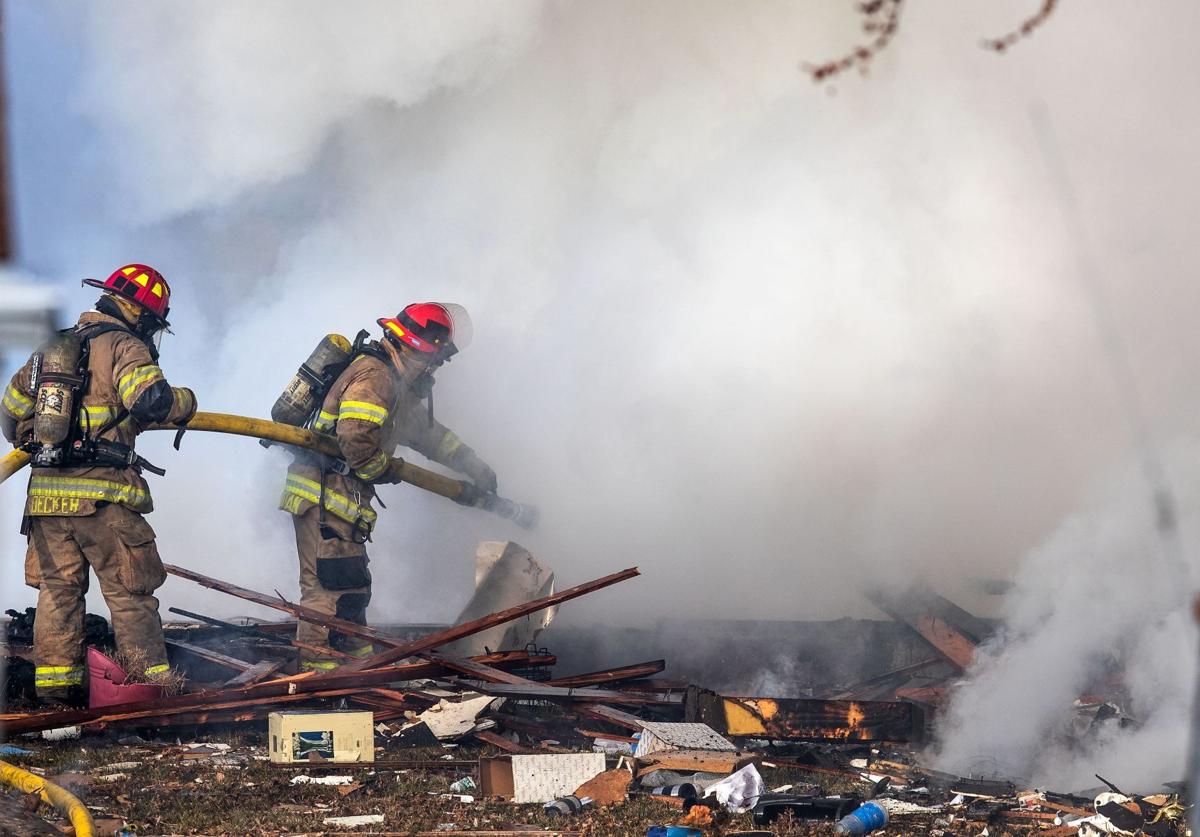 Theresa Toledo was known for her delicious Mexican food and had been preparing tamales to deliver to relatives.

But she struggled with her 28-year-old grandson, Alexander Toledo, who lived in the basement of her south-central Omaha home.

Theresa had grown fearful of him, and on Monday she filed an application for a domestic abuse protection order. In the petition, she said he used methamphetamine and hallucinogenic mushrooms.

“I need Alex out of my house now before he destroys my house or harms me, the drugs make him crazy,” she wrote.

Omaha fire officials said it may take days to determine the cause of the blast, which was heard and felt far from the house.

Firefighters were called to the scene at 8:15 a.m. Heavy black smoke that billowed from the remains of the house could be seen for blocks.

Debris from the explosion blew into neighboring trees, vehicles and houses. The homes directly to the north and south suffered substantial fire damage.

Omaha firefighters found a dog that died at the scene of the blast. They gave oxygen to another dog.

Neighbors and bystanders saw a young man sitting on the south side of what was left of the home. Melanie Grabowski, who was walking her dog when she heard a large boom, said the man was “completely charred. His clothes were burned off him.”

Neighbors wrapped the young man in some blankets, Grabowski said, and two men picked him up and carried him across the street.

Firefighters had the fire under control by 10 a.m. They initially reported only one fatality but found another body when they sifted through the rubble, said Omaha Fire Battalion Chief Scott Fitzpatrick. Officials closed 51st Street from L Street south to Holmes Street to continue their investigation, he said.

Vincent Toledo, Theresa’s ex-husband, and his wife, Judy Devault Toledo, said in an interview that despite the divorce between Vince and Theresa, they all stayed in close contact.

Theresa “was a friend to everyone,” Judy said. “Even though there was a divorce, it was just like one plain family. We kept in close touch.”

Judy and Vince had planned to visit Theresa on Thursday to pick up tamales and deliver them to Vince and Theresa’s son in St. Louis. In addition to Angela, the divorced couple also have another daughter who lives in Denver.

“Larry and Theresa had practically been living in North Platte with her mother, who just turned 100,” Judy said. “They came home for the holidays to be with Angela, and then they were going right back.”

Vince and Judy said they were unaware that Theresa had applied for a protection order requesting that Alex be removed from the home.

Theresa wrote in the protection order application about Alex’s drug use and said he “talks to himself and says his step-father is in his head.”

“I told Alex that he needs help to get off the drugs and get a job. He has put holes in the basement walls where he stays and you can’t even walk in the basement. He had electronics in the walls and ceiling. I’m afraid he will start my house on fire.”

Omaha police officers went to Theresa’s home just after 12:45 p.m. Monday to investigate a disturbance. Douglas County Judge Sheryl Lohaus approved the protection order just before 4 p.m. Monday. She ordered Alex out of the house and told him not contact Theresa or communicate with her.

Theresa’s protection order request detailed Alex’s criminal troubles. In June, she said, while they were in North Platte to visit her mother — Alex’s great-grandmother — Alex took the car to go to Walmart, where he allegedly shoplifted an iPad.

She also noted that Alex recently had spent seven days in the Cass County Jail after being arrested on suspicion of a drug charge.

In September, Alex was charged with possession of a controlled substance. He had a hearing scheduled in Cass County for Jan. 19.

According to an affidavit, on Sept. 24, a Cass County sheriff’s deputy was called to a spot near U.S. Highway 75 south of Murray, Nebraska, because Alex was walking in and out of traffic lanes. Alex told the deputy that he had gotten a ride from Omaha to Lincoln to meet up with people he met online, but when he arrived he was “taken advantage of” and kicked out.

The deputy asked if Alex had walked to Cass County from Lincoln. Alex said he had and was very thirsty. Alex then asked the deputy for a ride to a spot with internet access so he could contact someone to pick him up.

The deputy said he would need to search Alex before giving him a ride, and he agreed, according to the affidavit. In the search, the deputy found a meth pipe and a plastic bag containing mushrooms.

“Toledo stated that he is really into natural energy and that those mushrooms give him energy,” the affidavit said.

Alex was booked into the Cass County Jail and later was released on his own recognizance.

His address in court filings is listed as the 51st Street home, though it’s unclear how long he had been living there — in October 2018, he was sued for unpaid rent and evicted from an apartment near 108th and Blondo Streets.

Cathie DeLoa, a niece of Theresa’s, said her aunt was beloved by her extended family.

Retired, Theresa made Mexican food and spent lots of time with family.

“She’d do anything for anybody,” DeLoa said.

An explosion and resulting fire Tuesday morning leveled a house near 51st and M Streets, killing one person and critically injuring two others.

Plattsmouth resident sentenced to prison in death of Bellevue motorcyclist

A Plattsmouth resident was sentenced to six years in prison after being found guilty of motor vehicle homicide and failure to stop and render aid in the death of a Bellevue man.

Alex Toledo had been transferred to the Kansas University Medical Center in Kansas City, Kansas, after the explosion.

Alex Toledo had been transferred to a burn unit at the Kansas University Medical Center in Kansas City, Kansas, after Tuesday's blast. He died there Wednesday.