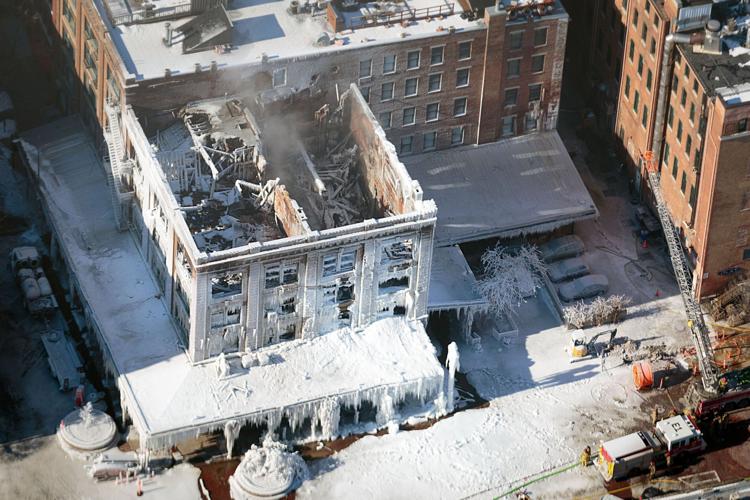 The Mercer Building in the Old Market after a natural gas-fueled explosion and fire in January 2016. The building has since been rebuilt. 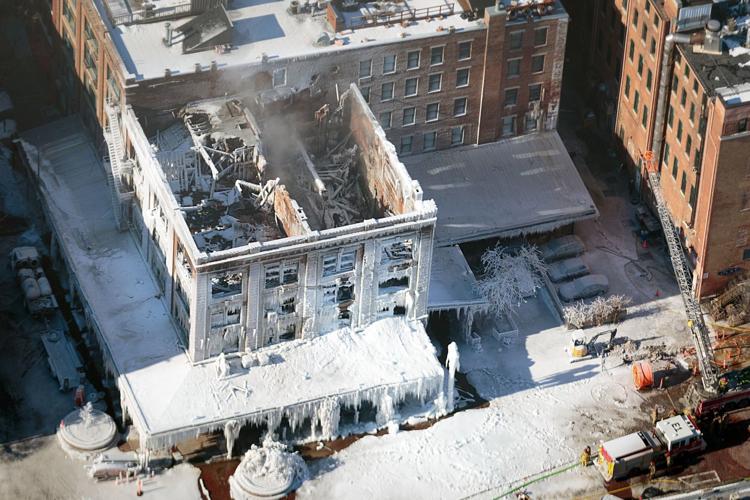 The destroyed Mercer Building, home of the M’s Pub restaurant in the Old Market, the day after the January 2016 explosion and fire. A judge held Omaha’s Metropolitan Utilities District and a Minnesota contractor equally responsible for the disaster.

A utility worker marking gas lines with half-dollar-sized dots, instead of foot-long lines, because he didn’t want to mar the aesthetics of the Old Market. A utility technician locating the gas shutoff valve on his way to the fire but locking the coordinates for it in his truck, causing a 70-minute delay in squelching the fire.

Judge Timothy Burns ruled that MUD will pay half of the award the judge will determine at a later trial in which he’ll receive evidence on the extent of damages suffered by three plaintiffs: the Mercer family, founders of the Old Market; their restaurant, M’s Pub; and their insurance carrier, Columbia National Insurance Company.

Burns ruled the other half of the fault goes to North Central Services, a Minnesota contractor that was boring lines in the Old Market for Verizon Wireless. In the 6½ years since the fire, 55 plaintiffs, including the building’s tenants, had filed 16 lawsuits against MUD and the other companies involved in the project. Lawsuits against the City of Omaha were tossed because it had no role in the project or fault in the resulting fire. Most of the other lawsuits were settled.

Burns’ decision to split the damages will no doubt be appealed. Burns spent most of his time on MUD’s haphazard response — including using dots to mark gas lines. But in the end, the judge also ruled that NCS should have been more careful in its drilling, which involved horizontally boring under the sidewalks to install fiber-optic cables.

“The Court acknowledges the destruction of the Mercer Building was a devastating loss to plaintiffs and Omaha as a whole,” Burns wrote.

Thankfully, the judge said, no one died. But the judge ruled that the strike happened in part because MUD marked the gas lines differently than it had the rest of the gas lines in the Old Market area.

In a statement Thursday, Stephanie Mueller, vice president for customer experience, said MUD’s legal team was reviewing the order and “considering all options available to it at this time.”

“The District is deeply disappointed in the Court’s findings including its allocation of fault,” Mueller said.

In his 38-page ruling, which followed a two-week trial in February, the judge said he was troubled by a MUD worker’s testimony that he used two half-dollar sized dots — as opposed to full lines — to mark the sidewalk.

MUD employee Chris Sacco said he “chose to use dots for aesthetic purposes so as not to overly mark the property in front of M’s Pub,” Burns wrote. “This explanation overlooks several other considerations, most notably the presence of an 18-inch blue line indicating a water utility that was marked the same day by MUD locator Travis Crawford … No other gas lines were marked with yellow dots.”

A second locator, Ron Jankowski, drove the area five days before the fire. Traveling 15 mph, Jankowski testified “he was able to see Sacco’s yellow dots on the sidewalk.

“Therefore, he did not re-mark, re-locate or get out of his truck, in order to make sure the markings were sufficient,” Burns wrote.

Employees of NCS were boring under the streets of the Old Market to place fiber-optic cables for Verizon’s network. In later interviews, the judge noted: “All members of the NCS crew consistently testified that they did not see Sacco’s yellow dots, nor did they see the abandoned gas valve” in the area.

“While NCS workers did not see the yellow dots marked by MUD prior to excavating, members of NCS were able to identify the dots when shown a photo” during later depositions, Burns noted.

The judge also ruled that MUD failed in its duty to fill in and properly mark a gas valve that was abandoned when MUD redid the gas lines into M’s Pub in 2009.

The failure to seal that old gas valve caused delay as workers spent more than an hour trying to shut off a line that was no longer operational and, thus, was not the cause of the fire.

According to the judge’s order:

NCS struck the gas line about 2:45 p.m. that frigid Saturday. The gas ignited and the basement of the Mercer Building exploded about 2:50 p.m. — raising the first floor approximately 2 to 3 feet and throwing one employee about 10 feet in the air. The building’s windows blew out.

Prior to arriving at the explosion at 3:16 p.m., MUD technician Steve Osmera “did locate the correct turn-off valve on his vehicle’s computer,” Burns wrote. “However after making contact with OFD, he realized he locked the piece of paper he had written the coordinates on in his truck.”

In turn, Osmera “and other MUD technicians believed the abandoned gas valve box on the sidewalk was the correct gas valve shut off to the line into the Mercer Building,” Burns wrote. “They ultimately had to break off the cover in order to turn the valve; however, the fire did not abate.”

It took more than an hour before MUD, at 4:26 p.m., finally found “the correct gas shut off valve to the service line running to the Mercer Building.”

The correct gas valve was the same one Osmera initially located on his computer, Burns wrote.

“This was approximately 90 minutes after the gas service line was initially struck by NCS and approximately 70 minutes after MUD employees arrived on the scene,” Burns noted. “The fire continued in the Mercer Building, ultimately reaching the fourth floor and causing the roof to collapse.”

Burns wrote that the Nebraska Supreme Court has noted that utility companies have a heightened “duty” to warn and protect customers because of the inherent danger of energy sources like natural gas.

“The Court finds MUD, as a provider of natural gas, has a heightened duty to exercise care commensurate with the risk posed by the nature of natural gas as a dangerous commodity,” Burns wrote. “This includes using reasonable care to locate and mark its lines; maintain its utilities, which includes properly abandoning its discontinued service lines … and responding to emergencies in a reasonable manner.”

MUD had argued that it had used the proper color (yellow) and had marked the gas line satisfactorily. It noted that the Nebraska State Fire Marshal had approved the use of dots in an amendment to its regulations passed after the fire, in 2019.

“The issue is not whether dots are permissible — in fact, it is undisputed that dots can be appropriate for marking utilities,” Burns wrote. “Rather the issue is whether the two yellow dots made by MUD clearly identified the utility lines at issue. … In this case, they did not.”

Burns noted that other gas lines in the Old Market were marked with yellow lines, not dots.

Burns didn’t fault MUD for its initial response time. The judge did take issue with the 70 minutes it took from the time it arrived to then “turn off the gas.” He noted the error of the MUD employee locking the coordinates to the active gas valve in his truck.

An Omaha fire captain testified that most utilities cut off ruptures within 10 to 15 minutes of an emergency, Buns said.

“MUD’s delay in turning off the gas was a serious breach of MUD’s duty of care,” Burns wrote.

The judge, however, did agree with MUD’s argument that even if it had cut off the gas upon arrival at 3:16 p.m., the Mercer Building still would have been a total loss. By the time MUD arrived, Burns ruled, the fire had compromised the first floor, which means firefighters would not have been able to fight it from within.

Attorneys for MUD also had argued that NCS should have seen existing blue lines on the same section of sidewalk and removed a section of the sidewalk to look underneath — a process called “potholing.” That would have revealed the gas lines.

But NCS said there was no reason to “pothole” the sidewalk for water lines, since water lines are 6 feet deep and the company was boring closer to 3 feet below the surface.

Ultimately, the judge held NCS 50% responsible because, he wrote, it “had a duty to inspect the area carefully in order to ensure the boring path would not affect underground utilities.”

And the judge held MUD 50% responsible for dotting a sidewalk instead of marking it.

Man whose body was found in northern Douglas County is identified

The Douglas County Sheriff's Office has identified a man who was found dead on the side of the road Sunday morning.

In Omaha alone, at least 26 people died of drug overdoses in the first six months of 2022. A growing part of the problem: fentanyl, a cheap but potent synthetic opioid.

The body of a man was found in a creek near Benson Golf Course, and an Omaha police spokesman said investigators are still trying to determine the individual’s identity.

An Omaha police officer who had been charged in January with third-degree domestic assault has resigned from the department.

A man accused of taking an off-duty police officer's gun and firing it during an attempted bank robbery near 50th and Ames was taken into custody.

2 dogs killed in house fire near 35th and Poppleton

Two dogs were killed Tuesday morning in a fire in a house near 35th Street and Poppleton Avenue.

The Sarpy County Board has appointed Trace Jones to the office of Sarpy County treasurer. Jones has been serving as interim treasurer since April 2021.

A Fremont man and his partner stole upward of $6 million from customers and subcontractors of an Omaha property management company, federal prosecutors allege.

Omaha police officers were called to Florence Tower on Friday morning to investigate a shooting. When they arrived, they found a dead person inside one of the apartments.

The Nebraska Supreme Court on Friday dismissed an appeal by a handful of Creighton University students who sought to be exempt from the private Catholic school’s COVID-19 vaccine mandate last year.

The Mercer Building in the Old Market after a natural gas-fueled explosion and fire in January 2016. The building has since been rebuilt.

The destroyed Mercer Building, home of the M’s Pub restaurant in the Old Market, the day after the January 2016 explosion and fire. A judge held Omaha’s Metropolitan Utilities District and a Minnesota contractor equally responsible for the disaster.