Thefts of catalytic converters have skyrocketed in recent years in the Omaha area and across the state, but experts say car owners can take precautions to protect their vehicles.

“It’s an increasingly serious problem here in Nebraska,” said Nick Faustman of AAA Nebraska. “I think the economic situation of the pandemic and the ease these devices can be removed has contributed to the problem.”

A catalytic converter is an exhaust emission control device that reduces toxic gases and pollutants in a vehicle’s exhaust gas.

Precious metals such as platinum, palladium, rhodium and gold are used in the converters. Recyclers extract the metal and resell it.

The price of the precious metals has been increasing. Rhodium, for example, was selling at $2,300 an ounce in early January 2019, according to Kitco.com, a precious metals retailer that tracks prices. As of Nov. 3, it was going for $13,250 an ounce.

“There definitely is a market for it,” he said. “It’s the closest and most convenient thing to turn these into cash.”

Catalytic converters, which were mandated in 1975 for all U.S. cars and trucks, can be stolen in as little as 30 seconds. They often are sold to metal recyclers for $20 to $200, according to Edmunds, a national retailer.

Thefts of stolen catalytic converters in Omaha have risen exponentially since 2019, when 54 reports of such thefts were filed, a police spokesman said. In 2020, 460 catalytic converters were reported stolen in the city. Through Oct. 22 of this year, 1,095 have been stolen.

Having a catalytic converter stolen is costly for vehicle owners, who may have to pay $1,000 to $4,000 for a new converter. Drivers who have comprehensive insurance coverage still must pay a deductible.

A July report by State Farm found that its converter theft claims rose nearly 293% nationwide from mid-2020 to mid-2021, compared with the previous year. The company paid out about $34 million to customers, compared with about $9 million the year before.

Vehicle owners can take steps to prevent thieves from taking their converters and help police nab the thieves, Richter said. Omaha police suggest engraving the car’s Vehicle Identification Number into the converter or painting it on with a bright high-temperature exhaust system paint. Local scrap yards have cooperated with law enforcement, Richter said, and will notify police if they think someone has attempted to clean off paint, buff off engraving or bring in a large number of converters.

Ultra-low-emission vehicles such as the Toyota Prius have catalytic converters that contain more of the precious metals that render pollutants harmless. Trucks and SUVs often are hit by thieves because it’s easier to slide under those vehicles to cut the connecting pipes using a battery-operated saw.

In some states, lawmakers have responded with legislation to prevent the sale of stolen devices. The measures include banning the sale of converters without proof of ownership, tightening scrap metal dealers’ record-keeping requirements and beefing up criminal penalties.

In September, Omaha police arrested 15 people after a months-long investigation into catalytic converter thefts. Richter said it’s common that groups of people work together to steal and sell the converters. He’s unsure how much thefts will slow down because of cold weather and snow, but noted that last winter, despite heavy snow, thieves were wearing coveralls and warm clothing when they stole converters.

“It has become a very major problem, and I’m glad to see this increase in attention and awareness for this,” Richter said. He added that more residents are calling 911 if they see suspicious behavior, which can help patrol officers catch thieves in the act.

Faustman said AAA is working with a state-funded task force on recommendations for curbing theft, and a short video created by AAA North Dakota offers tips.

During your next oil change, ask the mechanic to etch a non-removable identification number onto the catalytic converter.

Purchase a protective shield that can be installed over the catalytic converter.

“The shields are popular because they make the thefts that much more difficult,” Faustman said. “I’ve even seen owners have someone weld the converter to the vehicle.”

This report includes material from Stateline.org.

An Omaha police lieutenant said Wednesday that the arrests of two men could make a significant impact on a recent spate of catalytic converter thefts.

A Douglas County judge ordered an Omaha man to be held on $125,000 bail after he was charged with felony theft of over $43,000 in catalytic converters. 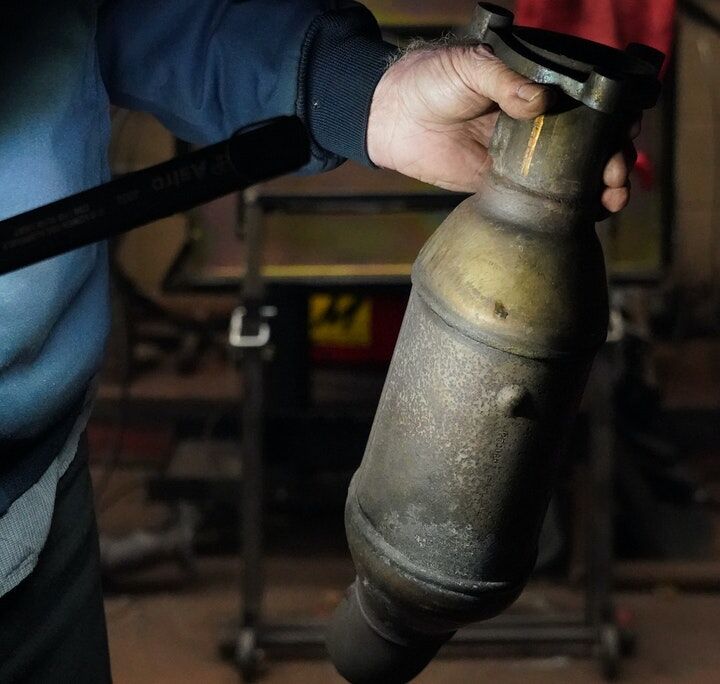 A catalytic converter is an exhaust emission control device that reduces toxic gases and pollutants in a vehicle’s exhaust gas. Thefts of the devices have increased across Nebraska. 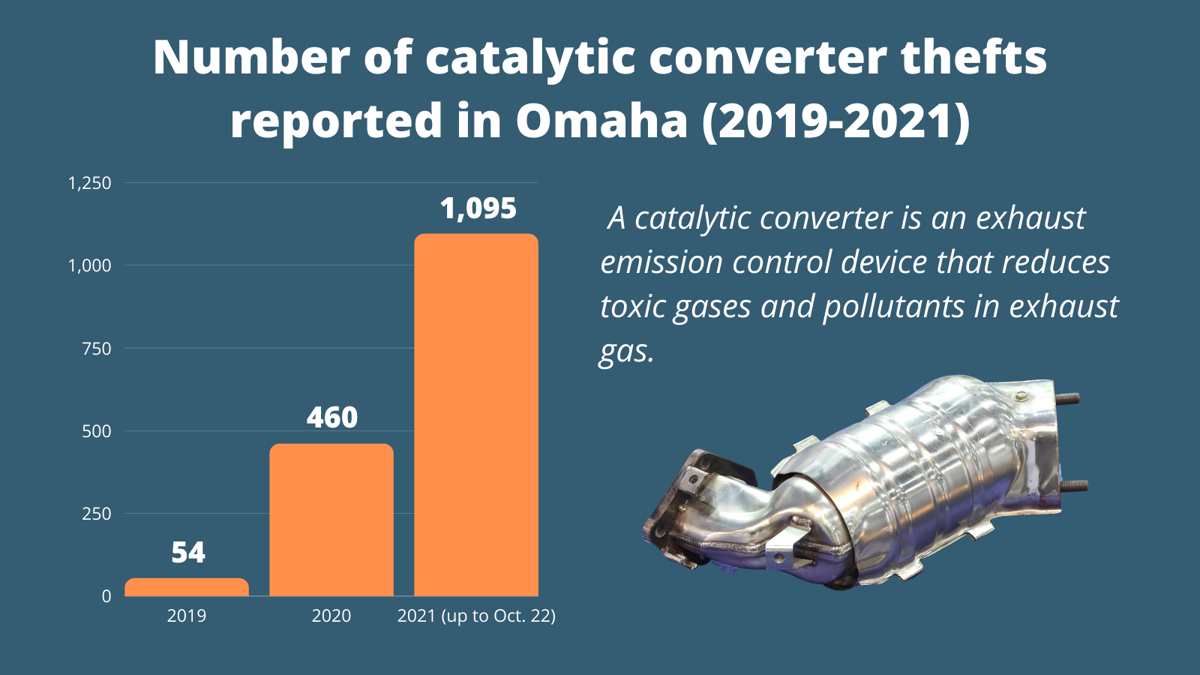