It was, in essence, a battle for worst person in the courthouse.

A judge said he had a hard time telling whose behavior was more despicable: the stepfather who raped his stepdaughter from age 11 to age 14; or the mother who placed her daughter back in the care of the stepfather after taking her to get an abortion at age 12.

For four years, Pedro Fernando-Flores, 33, molested and raped the child until she mentioned the abuse to a church friend. That friend went to the pastor, who went to Omaha police.

One person who didn’t go to police: the girl’s mother, Shawna Fernando.

She took her daughter to a medical clinic to get the abortion. Then she brought the child home, to be raped by the same man over and over for the next three years.

The penalty for both parents’ behavior: years in prison.

Douglas County District Judge Olon Engleman this week sentenced Fernando, 32, to 10 to 14 years in prison for two counts of child abuse and one count of accessory to a felony. Under state law, which cuts most sentences in half, Fernando must serve five years before she is eligible for parole; absent parole, she’ll serve seven years.

Earlier this year, Engleman sentenced Fernando-Flores to 60 to 80 years in prison for two counts of sexually assaulting a child.

Shawna Fernando’s attorney, Jim McGough of Omaha, had noted that his client essentially has been stripped of ever being a parent again. She relinquished her parental rights to her seven children. And her ovaries were removed as part of a surgery to address a medical condition, he said.

“She has endured the complete loss of her children,” McGough told Engleman. “That is a tremendous price.”

McGough said his client plans to appeal her conviction. He had argued that Fernando’s then-daughter never told her that Fernando-Flores was the one responsible for getting her pregnant. He said the girl had told her mom she got pregnant by a boy at church or school.

McGough said that Fernando’s behavior amounted to child neglect, a misdemeanor, and that she never intentionally placed her daughter in harm’s way.

Judge Engleman rejected that, finding Fernando guilty of three felonies — two counts of child abuse and one count of being an accessory to sexual assault — after a two-day trial this fall. Fernando had faced up to 26 years in prison — 13 years’ real time.

Prosecutors Kati Kilcoin and Nathan Barnhill, deputy Douglas County attorneys, had pointed to several pieces of evidence that they say proved that Mom was a knowing accomplice. For one, Shawna Fernando was concerned enough about the possibility of her daughter getting pregnant that she was tracking the daughter’s menstrual cycles.

For another, the daughter testified repeatedly that she told her mother that Fernando-Flores is the one who got her pregnant.

Engleman said Thursday that he found the daughter, now 16, much more believable than her mother. “I found her credible,” Engleman told Fernando. “I couldn’t say the same for you.”

The judge’s voice broke as he admonished Fernando for not protecting her daughter over the course of several years.

“It (was) your job as a parent,” Engleman said, his voice catching. “And you failed her.”

Kilcoin and Barnhill detailed the abuse and the effects it had on the girl. The girl had to relive the trauma, detailing her stepfather’s predatory acts in police interviews, depositions, court hearings and at trial — in all, at least six times.

She testified about the day her mother took her to get an abortion. She was about six weeks pregnant when a doctor administered what’s known as a chemical or medicinal abortion — a series of pills that ends the pregnancy and antibiotics that protect against infection.

The mother then returned the girl to the house. As the girl’s body was going through the effects of the abortion, Fernando and Fernando-Flores left her at home while they went to church.

That wasn’t the worst of it. After the abortion, from age 12 into age 14, the girl was sexually assaulted by Fernando-Flores numerous times.

Now living with foster parents who plan to adopt her, the girl penned a victim impact statement that Barnhill read in court.

She said she can’t see her siblings as much as she used to, and she misses them. She loves her soon-to-be adoptive parents but sometimes wonders what could have been.

“Now I have to start over with another family — and they are amazing — but sometimes I wish I would have had a good family to begin with,” she wrote. “She has made it harder for me to be a real or normal teenager. I’m going to have to learn ... how to have a good relationship with a parent.”

Only one good thing came out of this, the girl wrote. Her mom “not being there will help me grow and heal as a person.”

Kilcoin argued that Fernando’s intentional ignorance of the abuse her husband inflicted on her daughter was just as despicable as Fernando-Flores’ acts.

“A couple of times, I’ve referred to her as (the girl’s) mother,” Kilcoin told the judge. “But she does not deserve that title. She chose her husband over her daughter day after day, month after month and year after year.

“(The girl) has been through four years of hell that could have been avoided.”

Kilcoin said she has seen the girl’s endurance throughout the case. She now attends a different high school, regularly meets with a therapist and has parents who are dedicated to her welfare. That Omaha couple plan to adopt the girl “and some of her younger siblings,” Kilcoin said.

“She’s strong, she’s courageous, she’s smart and she’s funny,” Kilcoin said. “She had to grow up way too fast, and she will have to battle demons every day for the rest of her life. But she is one of the most resilient individuals I have ever met.”

An Omaha police officer fatally shot a gunman wielding an AR-15 "with plenty of ammunition" at a west Omaha Target store midday Tuesday.

Data from Aldrick Scott's cell phone, Snapchat location and OnStar account helped investigators track his movements before and after the Nov. 20 fatal shooting of Cari Allen at her Omaha home.

Two Omaha police officers were shot and injured and a 38-year-old man was killed during an attempted burglary at a storage facility near 53rd and Center Streets Monday night.

An 18-year-old Target employee was pricing clothing when she heard what she first thought was a bike tire popping. “But I saw everyone panicking, and I was like, ‘That's probably not a bike tire.’”

A fourth grade boy brought a handgun to his Fremont elementary school Thursday. Officials said he thought it was a toy and wanted to show it off.

A Colorado teenager was arrested early Tuesday morning following a pursuit with Nebraska State Patrol troopers that reached speeds of 150 miles per hour.

Another former Lincoln police officer is leveling allegations of years of on-the-job sexual discrimination and the systematic ousting of those who report it in a lawsuit filed this week.

Here's how ice can be unpredictable on the lakes

Here's how ice can be unpredictable on the lakes 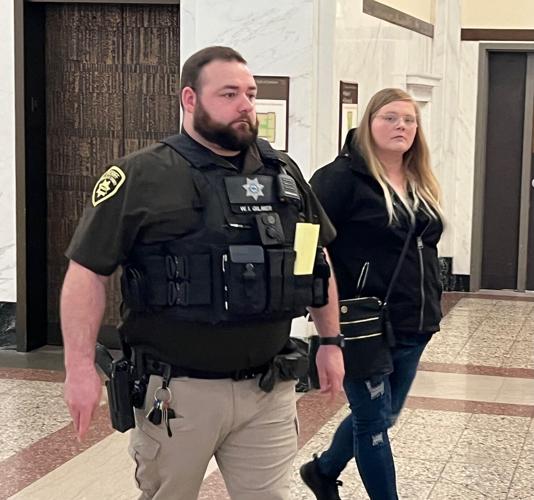