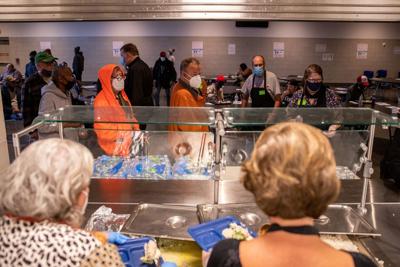 The Siena Francis House relies on donors — food distributors, grocery stores, restaurants, private citizens — to provide most of the ingredients for the meals it serves to its homeless guests.

A small kitchen staff strives to make the most of the wide-ranging generosity.

“We want to make sure that when people make gifts to our pantry, we use them as well as possible,” said Chris Knauf, the shelter’s chief development officer.

Several months ago, Knauf and Siena Francis Executive Director Linda Twomey started talking about how to involve more community members in food service and inject variety and innovation into daily menus, while still being good stewards with donations. Knauf said Siena Francis is investing more in its food service than ever in its 45-year history. The shelter serves about 1,200 meals a day from breakfast through dinner.

Knauf saw an opportunity to serve clients dishes that might cost $15, $20 or more in a restaurant.

He contacted Nick Bartholomew, an Omaha entrepreneur and restaurant owner, and together, they launched Dining With Dignity, a program that connects some of Omaha’s top chefs to the shelter.

“When we talk about dignity, one thing we’re talking about is a good meal,” Knauf said.

Over the past couple of months, the chefs have shared recipes with kitchen staff, demonstrated how to make the dishes and left the recipes behind in a binder for future reference.

In the beginning, Knauf had ingredients, an idea and a willing kitchen staff. But he was new to Siena Francis. A native of Milwaukee, he attended Creighton University as an undergraduate and law student, lived here for a while after graduation, then moved away. He came back to join the shelter staff about a year and a half ago.

“I didn’t have a roster of chefs at my fingertips,” he said.

He had never met Bartholomew but was told that he knew lots of Omaha chefs through his Dandelion Pop-Up lunch series. Knauf reached out to Bartholomew on LinkedIn and asked for a 20-minute meeting.

“It turned into an hour and a half where we were both building on our enthusiasm,” Knauf said. “A day later, he gave me a roster of 15 chefs who said ‘I’m in.’ ”

Thanksgiving in Omaha not always traditional, but football was a big part of the day

Chefs initially tour the shelter kitchen and storage area to get a feel for what ingredients they have to work with.

One recent day, the chefs were Elie Berchal, who has a Puerto Rican eatery near Creighton, and Dario Schicke, owner of Dario’s Brasserie and Avoli Astoria in Dundee.

Berchal was there to prepare a traditional Puerto Rican dish, while Schicke figured out what he would cook the next week.

They walked up and down the aisles of the food storage area, past numerous bags of bread, a giant plastic container of rosemary and multiple cans of tomatoes and beans, as Bartholomew played tour guide.

“If you ever want to do a coffee rub, there’s all the stuff for that,” he said as he pointed to a shelf.

Cranksgiving, a bike ride to help the homeless ahead of Thanksgiving, set for Saturday

People on the tour, sans coats, shivered as they navigated through a large, subzero walk-in freezer, past a gaggle of frozen fowl.

“We try to make this quick usually,” Bartholomew told his entourage.

He showed them the “extraordinary” equipment: a large braiser and oversize convection ovens.

And he got Berchal set up at a metal counter so she could begin to cook. She brought her mom, Cookie Sanabria, to be a sous chef and translator.

Berchal poured a whole can of olive oil in the braiser and dropped in a big chunk of bone-in ham.

“The bones will bring out the flavor,” she said as she instructed the staff. Kitchen worker Porsha Clayborne helped Sanabria chop green peppers and onions.

Participants in the shelter’s Miracles substance abuse treatment program work alongside the chefs. While in the program, participants must perform 12 hours of service each week, and many choose to work in the kitchen.

“They’re learning skills to put themselves in a position to have employment after they graduate, so they can get housing and pay rent,” Knauf said.

One Miracles participant said he enjoys working in the kitchen because of the fellowship, something he also nurtures in Alcoholics Anonymous.

With addiction, he said, “isolation is part of the problem.”

He sees two benefits to his volunteer hours: He gets to talk to chefs about their operations, and the chefs have a chance to find qualified workers.

He has worked as a prep cook in the past, and he now has two job offers from restaurant owners he met when he helped them at Siena Francis.

As she worked on that recent day, Berchal added veggies and dumped a 50-pound bag of dried beans in with the ham. She covered it all with water and scraped the bottom of the braiser with a 4- to 5-foot-long metal spatula. The mixture will be served with rice for an evening meal.

“This is my passion,” Berchal told an onlooker.

Schicke said he’s impressed with efforts to use the shelter’s bounty as extensively as possible.

“For me, it’s about using food and not throwing it away,” he said. “My mom would kill me if she knew I threw anything away.”

He returned the next week to make two kinds of bolognese to serve over pasta: white pork and traditional beef. He said it was important to him that he prepare something no other chef had offered. Others have cooked fried chicken and breakfast burritos, for example.

Bartholomew said additional chefs in the lineup include Jennifer Coco of j. coco; Jamil Bah of the House of Bah, a startup; Tim Maides of Monarch Restaurant & Bar; Ashish Sathyan of Kinaara; Ben Maides of Au Courant; Glenn Wheeler of Spencer’s for Steaks and Chops; and Jon Stastny of Wonton Jon’s, who prepared breakfast burritos for lunch last week.

Stastny said he was happy to help out.

“That’s what we’re about. ‘Show love, spread love’ is our motto. It’s posted on our food truck,” he said, adding that this week, for the fourth time, he’s preparing and delivering Thanksgiving dinners to people in need.

Bartholomew said he has heard positive feedback from the clients at Siena Francis House.

“The people are constantly asking when the next chef is coming,” he said. “Or they have started asking for the same meal twice: ‘If we can have chicken salad sandwiches twice in a month, why can’t we have Chef Dario’s bolognese?’ ”

Regular guest Shana Hunter said she has noticed an improvement in meals at the shelter. She has been staying there off and on for about three years.

She was impressed with the quality of Stastny’s breakfast burritos — “it was restaurant style, better than most,” she said. She also appreciates that portions have become larger lately. Stastny’s burrito had at least a cup and a half of scrambled eggs, plus fried potatoes and sausage, in a 12-inch tortilla.

Eventually, Bartholomew said, recipes from all the chefs will be in a cookbook to be sold as a fundraiser for the shelter. He is working with photographer Mark Swanson to compile it.

After this year, Bartholomew said, he plans to continue Dining With Dignity starting next September, when his Dandelion Pop-Ups wind down for the season. He also wants to help other shelters with whatever dining needs they have — sourcing food or finding volunteers, for instance.

For his part, Knauf is thankful today, and every day, for the many Omahans who donate food, from church groups that bring in prepared dinners such as meatloaf and casseroles to restaurants like Godfather’s, which drops off pizza every month.

Greater Omaha Packing, he said, is donating all the meat that’s needed by chefs who participate in Dining With Dignity.

“When chefs want to use a meat we don’t have, all we have to do is call Greater Omaha Packing, and they step up,” he said.

“I can’t say enough about Nick. He just turned 40, just had another child, he’s doing Dandelion. He could come up with excuses not to be here, to stop at the first of the year,” Knauf said. “But that’s not Nick. In fact, I have to rein him in sometimes.”

It’s hard, he said, to express how much it means to the homeless people at Siena Francis to enjoy meals made by some of the most celebrated chefs in the city, an experience that until now has been unavailable to most of them.

“Our guests could not be more happy with getting good, healthy and flavorful meals from people who, frankly, don’t have to be here but want to be here,” he said.

Families who needed a little extra help on Thanksgiving were able to receive a full holiday dinner through Jon Stastny and his group of more than 60 volunteers.

LeadBelly said the pandemic played a role in the Omaha location’s demise. Owners at its parent company said they plan to concentrate on their Lincoln restaurants: the original LeadBelly and Toast. 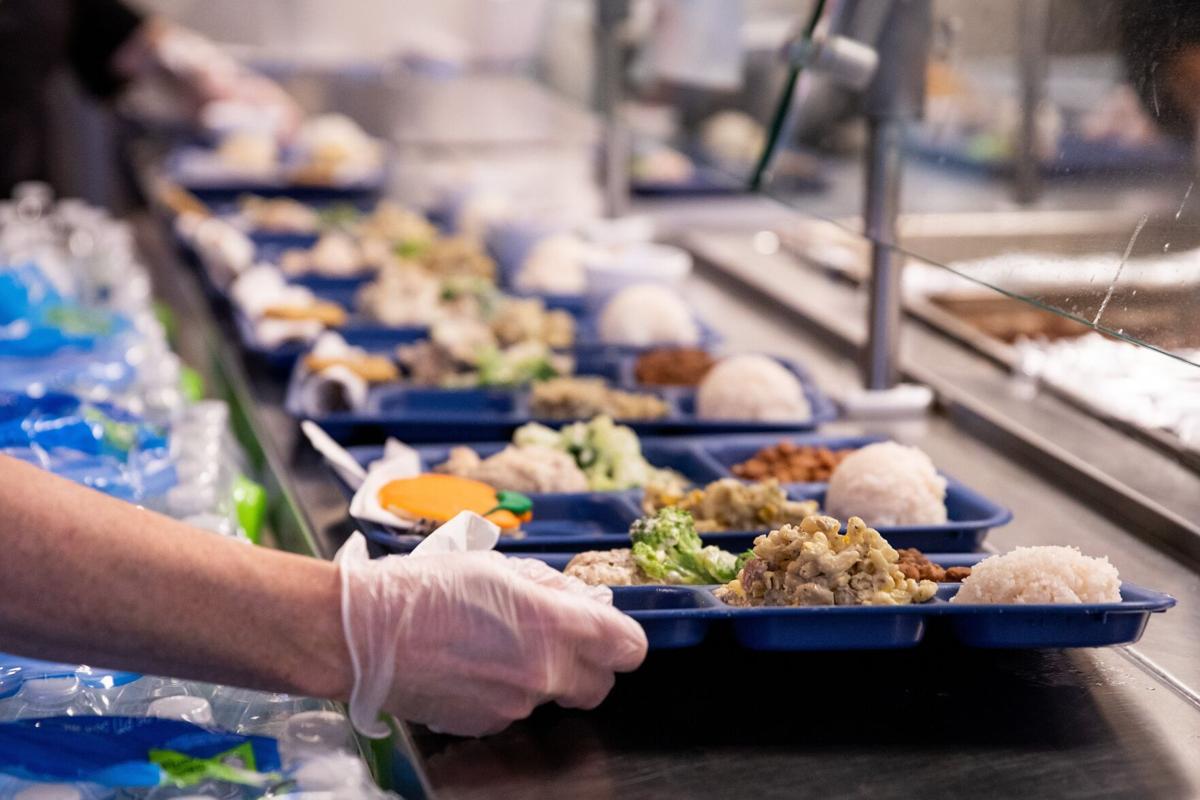 Meal trays with chicken in white sauce, rice and beans and a macaroni salad by Puerto Rican chef Elie Berchal at the Siena Francis House in Omaha. 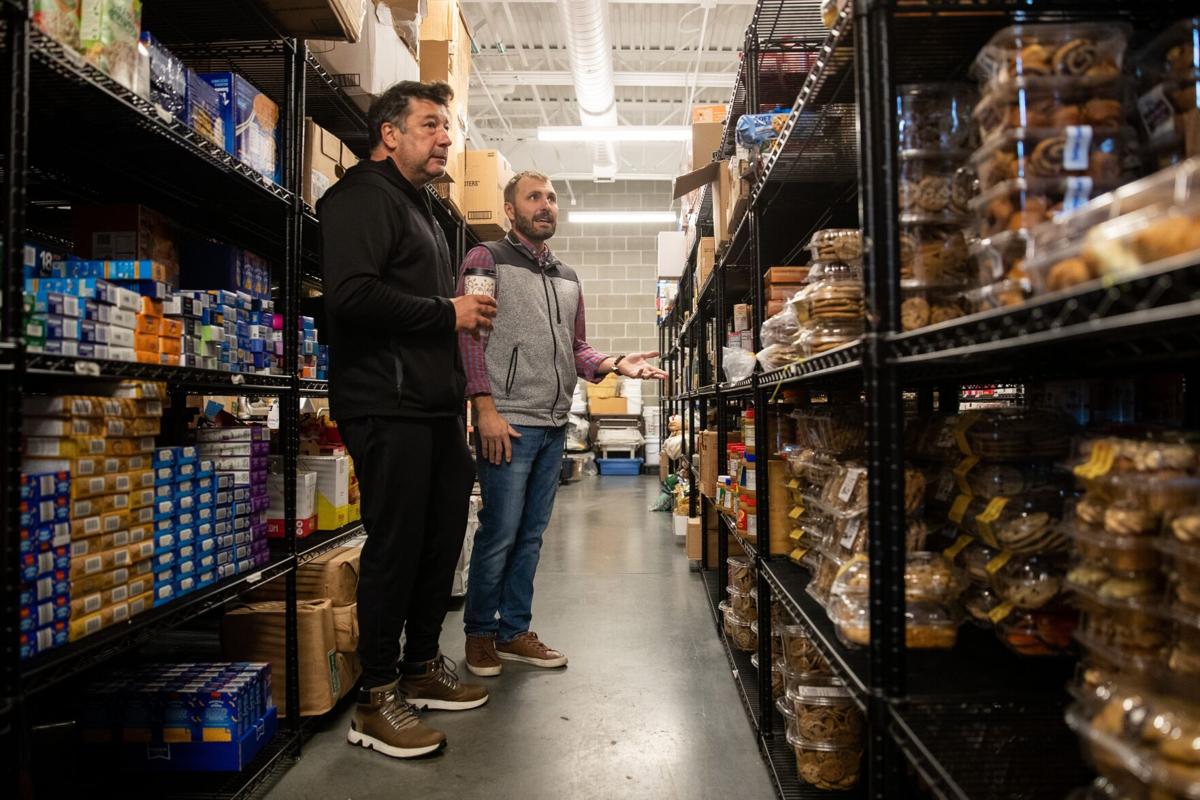 Dario Schicke, left, the chef and owner of Dario’s Brasserie and Avoli Osteria, and Nick Bartholomew tour the pantry at the Siena Francis House. Bartholomew started a program that brings chefs into the shelter to create new menu items. 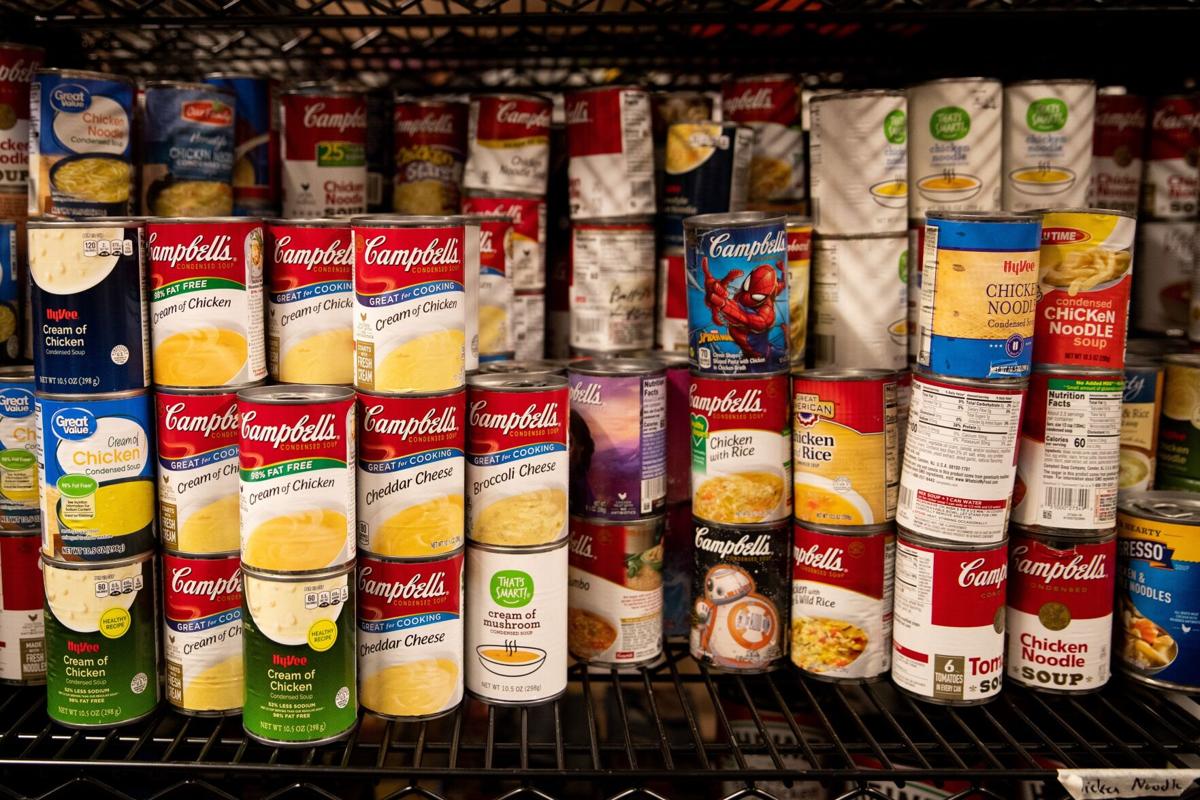 Cans of soup in the pantry of the Siena Francis House in Omaha. 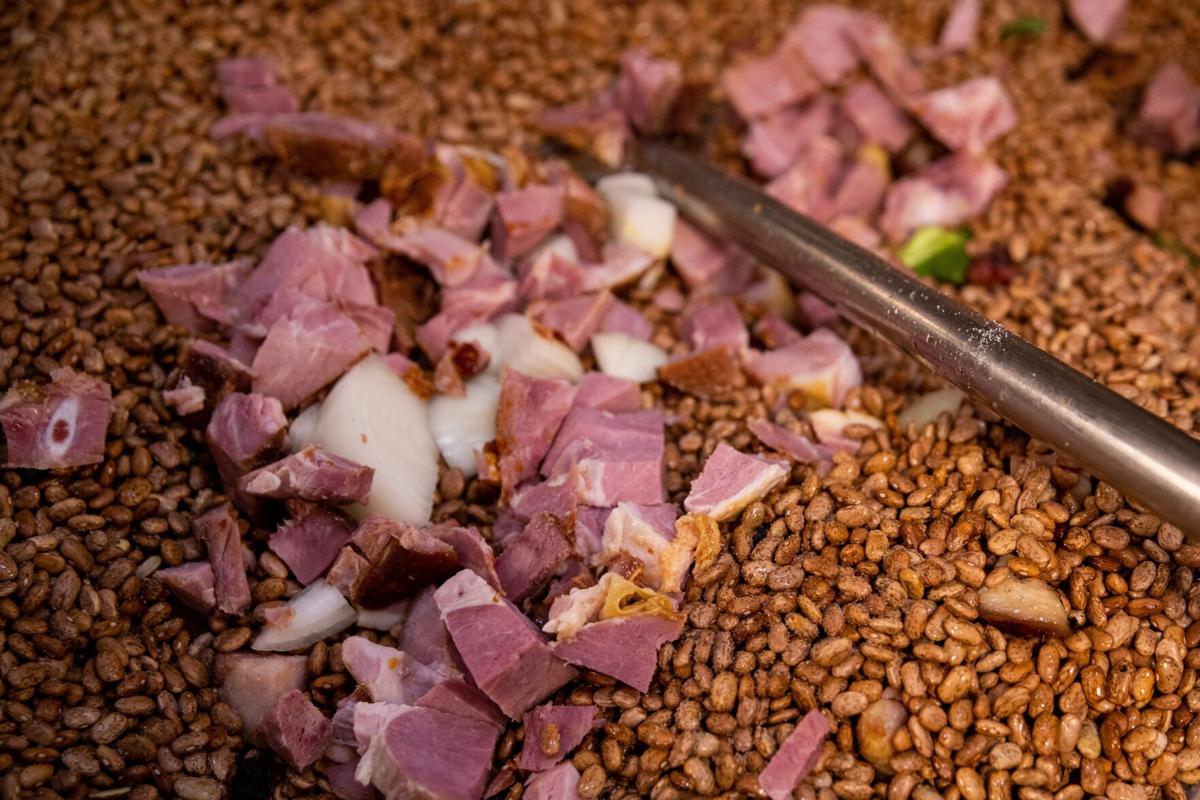 Pieces of ham are added to pinto beans in a recipe by Puerto Rican chef Elie Berchal.