Those magical, spontaneous days off from school known as “snow days” are going away for some Omaha area schoolkids, their demise hastened by new remote-learning capabilities.

The Millard Public Schools already had been heading that direction by renaming their snow days as “e-learning days” and giving kids work to do. This year, Millard school board members made it official, erasing four snow days built into the calendar.

But all is not lost, kids.

Other districts like the Bellevue Public Schools and Elkhorn Public Schools will retain the revered tradition this year, giving kids days off free of assignments.

The Springfield Platteview school district found middle ground this summer when it amended its handbook to address snow days.

After three days of school cancellation for snow, severe weather or any other reason, students will be expected to participate in school remotely from home through e-learning or other schoolwork, Superintendent Brett Richards said.

“For now, we are striking a balance between having the joy of a snow day versus losing too many days of school for weather,” Richards said.

Other districts are still deciding how to handle snow days and looking to the Nebraska Department of Education for guidance.

And, of course, districts have to figure out how to handle snow days for the families that opted for all remote learning. Those kids have been learning at home ever since school started.

Will they get snow days, too?

Declaring snow days has always been about safety. When winter storms make travel dangerous, school officials cancel school to keep kids and teachers off the roads.

As long as there’s bad weather, there will still be snow days.

What could change is what kids will do on their impromptu days off.

Traditionally, snow days are for lounging around in jammies, building snowmen and forts, or flying down the biggest sledding hill, which ironically is often found at the local school.

But now that districts have beefed up their remote learning capabilities, kids could be asked to do work.

“Yes, video killed the radio star,” Millard spokeswoman Rebecca Kleeman said. “Snow days have been removed from the calendar and will be asynchronous going forward.”

Asynchronous means studying on your own time schedule as opposed to kids logging into a video- conference class at a specific time.

“The teachers will provide the work and be available for questions,” Kleeman said. “But there is no set time everyone will Zoom in together. Thus the ‘asynchronous’ part. So if you want to sleep late or go build a snowman, you can. You just have to get the work done on your own schedule.”

Millard school board members voted in September to amend the calendar, removing four days set aside as snow days. The last day of school is now listed as Monday, May 24, a week ahead of Memorial Day.

In years past, the Millard superintendent would assess each spring how many days lost to weather needed to be made up and declare the official last day of school.

School board member Mike Kennedy said snow days were “pretty much on the way out the door pre-COVID.”

Before COVID-19, not all districts had a portable computer for every student or sufficient internet capacity. Millard students could already access schoolwork from home via district-provided computers. The district has a one-to-one computer policy making that possible.

Millard students asked about the change were mostly disappointed.

“I really like snow days, because it was a day off from school, but we also get four more days of summer, so there’s that,” Morgan said. “But I think I’d rather have them spread out than all at one time because in summer I get bored.”

But she said she’ll handle the assignments.

“As long as it’s not going to take me all day, I don’t really care.”

Classmate Sean Foley said students should have traditional snow days, which he usually spends hanging out with friends.

“I don’t think they should give us work when all the generations before us never had work, because it’s kind of unfair,” he said.

One question that’s still up in the air for districts is whether the remote learning that takes place during a snow day would count as instructional hours.

The Lincoln Public Schools are waiting for guidance from the Nebraska Department of Education while exploring their options, spokeswoman Mindy Burbach said.

Nebraska Commissioner of Education Matt Blomstedt said the question of whether snow day learning counts toward state minimums hasn’t been resolved yet.

On the one hand, because of the pandemic, districts have more flexibility on instructional hours this year so it’s a good time to try some different approaches to snow days, he said.

“But as far as long-term policy to addressing that, we’re probably going to have to put some boundaries around what quality e-learning and quality remote learning will look like to count for the future,” he said.

Remote learning has been “hit and miss” across the state, he said.

Here’s how some other districts plan to handle snow days this year:

Westside will allow for at least two snow days without remote learning, spokeswoman Brandi Paul said. “We are still discussing options for remote learning beyond that,” she said.

Now that every Omaha student has access to a district iPad at home, through OPS’s one-to-one technology initiative, district officials may explore the possibility of students learning on snow days, according to spokesman Jeremy Maskel. But he said nothing’s been decided yet.

The district has not adjusted its calendar to get rid of snow days. The district will eventually be one-to-one at the middle and high schools, but the computers are still back-ordered.

“We don’t really have a plan to do anything different,” spokeswoman Annette Eyman said. “The big unknown is we don’t have our computers in yet. So we’re still waiting for devices.”

Administrators are discussing how to handle snow days, spokesman Jim Frederick said. The district doesn’t build snow days into its calendar. In the spring, the district will assess if the school year needs to be extended due to days missed from inclement weather, Frederick said.

DC West’s calendar still includes three snow days built in. “We are considering options for remote learning on those days but no final decision or plans yet,” Superintendent Melissa Poloncic said.

The Bellevue Public Schools built snow days into the school calendar. This year the district will continue to keep snow days as snow days, and no requirement for doing schoolwork remotely.

Bennington built snow days into the calendar. District officials are evaluating the option to conduct remote learning within 12 to 14 hours of announcing a school closing, according to Superintendent Terry Haack. Not all instruction can be delivered from home, he said. “Not impossible; however, it will take some planning,” he said.The 10 biggest single-day snowfalls in Omaha history

'You are so brave': OPS elementary and middle school students head back for in-person lessons

Elementary and middle school students in the Omaha Public Schools returned to in-person lessons for the first time in more than 200 days on Monday morning.

These Nebraska high school students are being honored as National Merit semifinalists.

What the Fremont schools, among the first to close in U.S., are doing to stay open

The Fremont Public Schools reopened for in-person learning on Aug. 11. And so far, the district has not experienced any COVID-19 spread within the schools.

If someone tests positive for COVID-19 and everyone in class was wearing a mask, including the person testing positive, the others don’t need to quarantine, the latest directed health measure says.

Check out our detailed look at how COVID-19 is affecting metro Omaha schools.

Shatel: Does anyone have a good defense? Let's see what the Blackshirts can do

Offenses have been scoring at will throughout college football this season, Tom Shatel writes, so what will we see form the Blackshirts in a couple weeks?

An OPS spokeswoman said 5,332 employees have been tested for COVID-19, and 25 positive cases had been found as of Friday.

"We hope this proactive approach improves our ability to avoid long-term closures and allows students/staff to monitor their health for symptoms when the virus is sure to be active," Habrock wrote.

Free COVID-19 testing will be offered in the parking lot of Gretna High School on Thursday after more than 40 positive student cases were traced back to a large gathering.

The 2020 graduating class has the lowest composite ACT score in 10 years, according to the nonprofit organization that administers the college readiness exam.

In the middle of filling out college applications and federal student aid forms, three Omaha Public Schools seniors had to weigh another big decision about returning to in-person lessons.

Prep had started the school year under the hybrid model. Freshmen returned to fully in-person lessons Sept. 28. The other students returned full-time to the school Oct. 12.

City crews will begin to pretreat Omaha roads with brine at noon Saturday and will continue until the precipitation begins Sunday.

Gretna voters will decide if it's time for two high schools in the rapidly growing school district.

Enrollment in Nebraska public schools drops for first time in 20 years; private schools down, too

Creighton Prep will temporarily revert to remote teaching on Nov. 16 because of an increase in COVID-19 cases among faculty.

The change to snow days will last beyond this school year, Omaha Public Schools spokeswoman Bridget Blevins said, because "our 1 to 1 Technology Initiative now allows us the opportunity to support students with teaching and learning at home."

A Nebraska state teachers union survey shows teachers are "overwhelmed" as they teach during the pandemic; some say they will leave the profession. 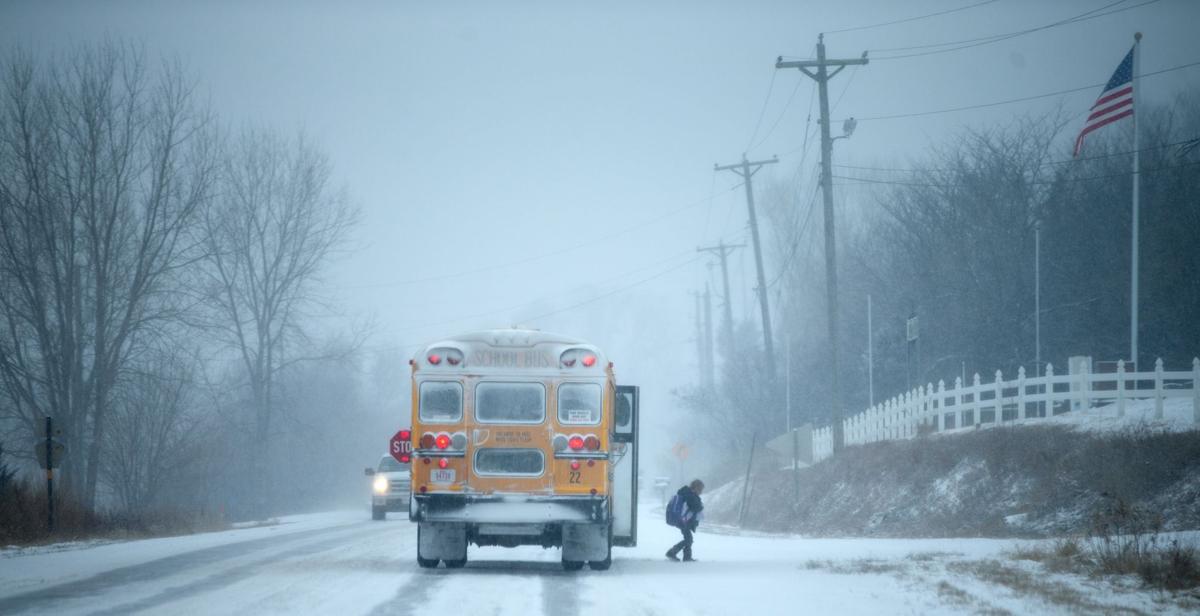 Bad weather traditionally has students hoping for a snow day off from school. And while some area school districts, including Bellevue and Elkhorn, say they will retain the tradition, others may change to “e-learning days.” That’s the name the Millard district is giving to its snow days.