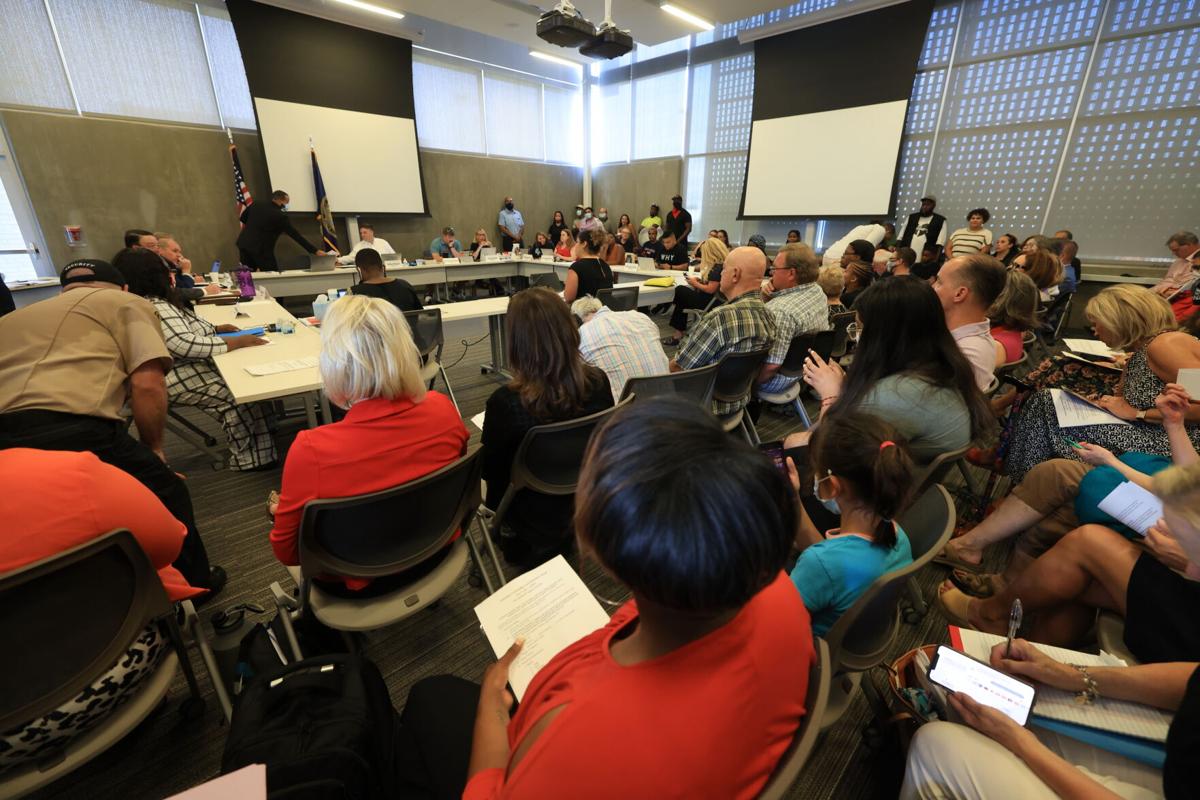 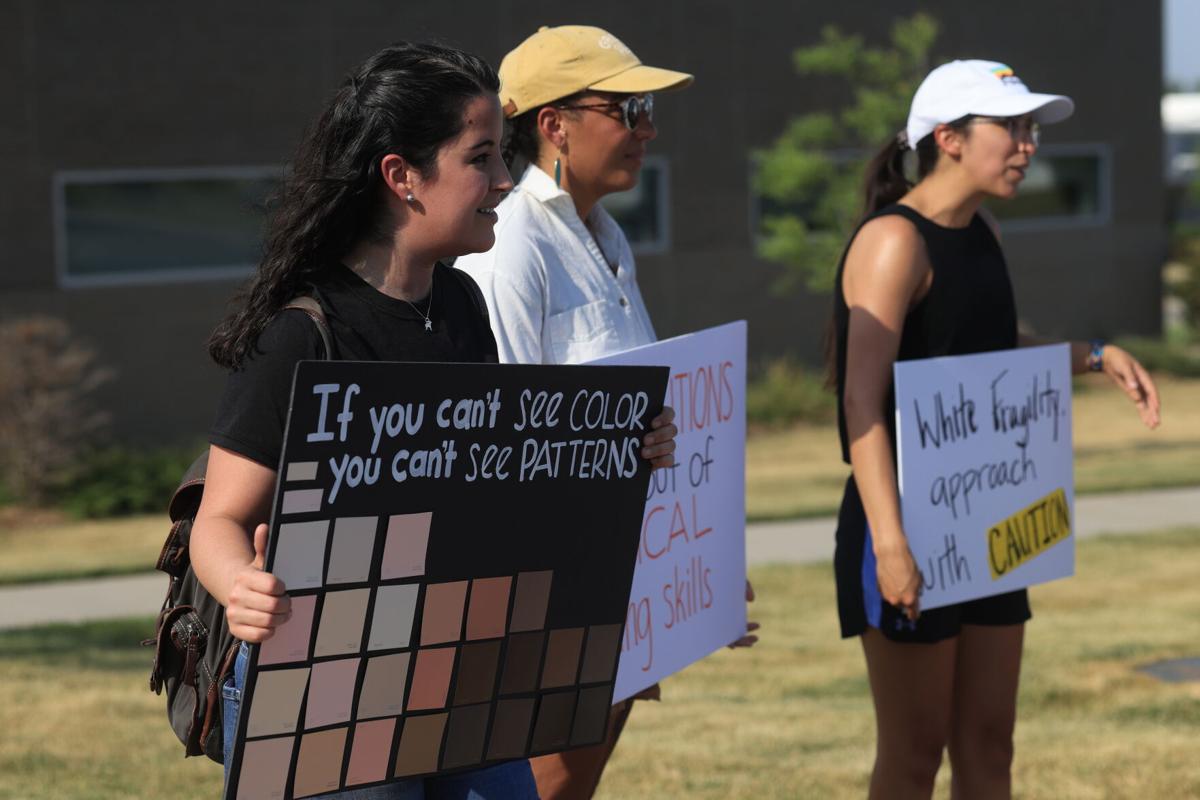 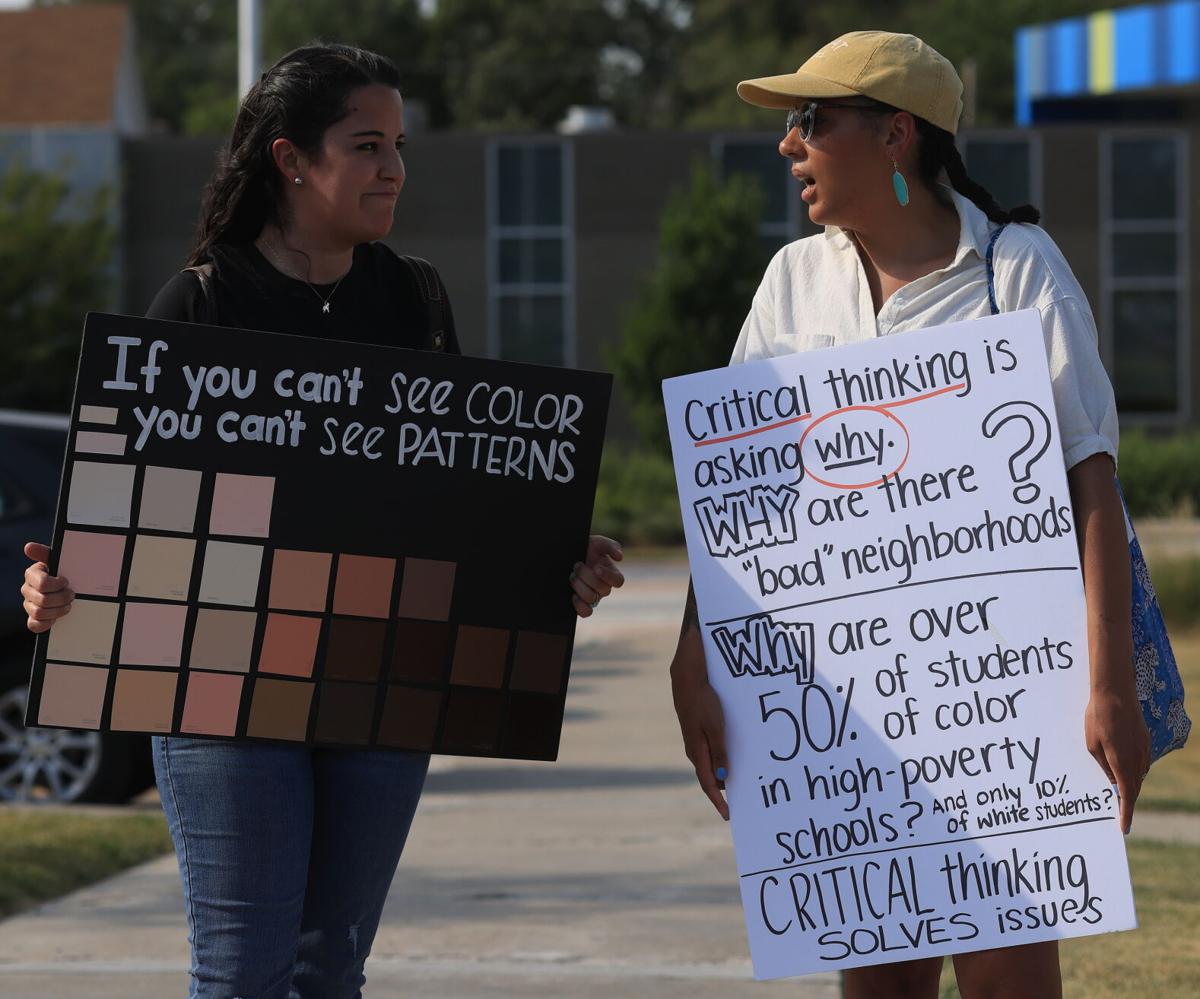 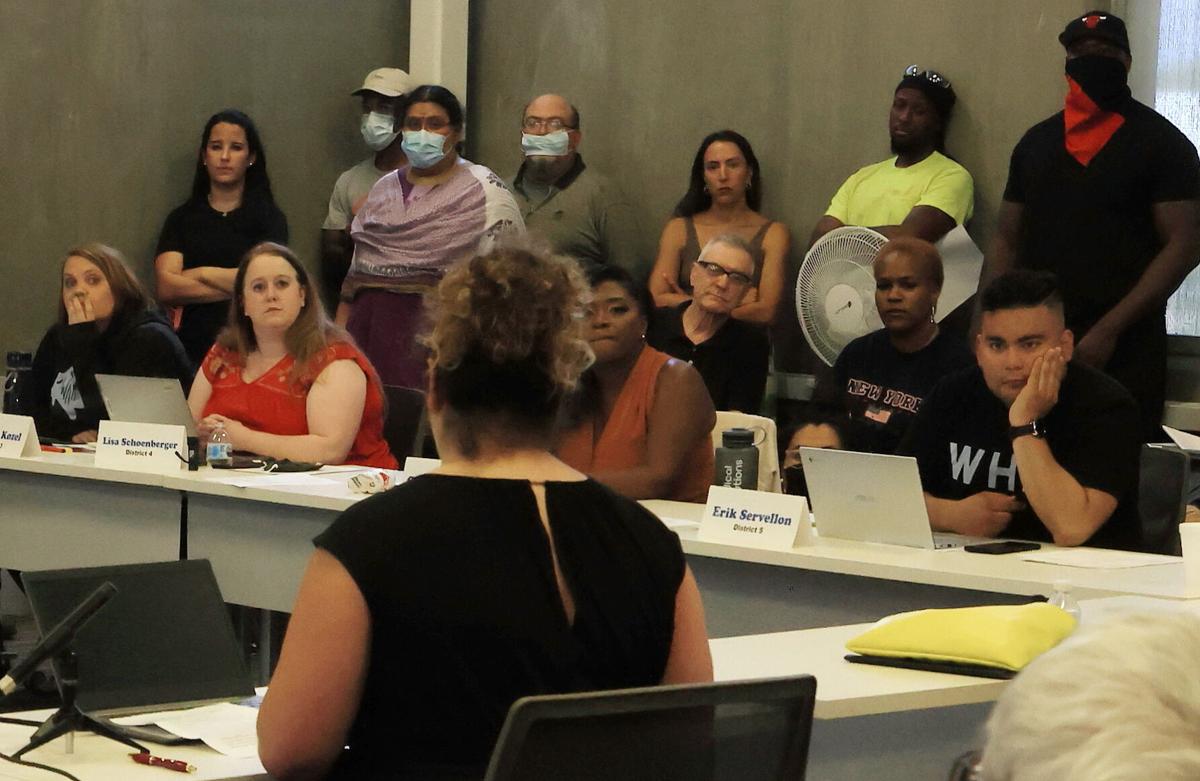 But institute officials say that the webinars provided a safe and welcoming forum for educators in Douglas and Sarpy Counties to discuss racial issues and that the content was “anti-racist” but not critical race theory.

“Do we teach critical race theory? The answer is no,” said Erin Owen, the institute’s director of communications and marketing.

The dispute triggered an emotional outpouring Thursday evening as supporters and critics of the theory and its tenets packed a meeting of the coordinating council of the Learning Community of Douglas and Sarpy Counties.

The council collaborates closely with the Buffett Institute at the University of Nebraska to provide programs aimed at improving the academic achievement of socioeconomically disadvantaged kids in 11 area school districts.

On the agenda for approval were two contracts involving the Superintendent's Early Childhood Plan, of which the institute would receive $9.2 million over the next four years.

About 150 people filled the standing-room-only meeting, some fanning themselves with papers, as the air conditioner seemed overwhelmed. Small groups of people with signs representing opposing views demonstrated on the sidewalks outside.

Although people have differing interpretations of critical race theory, a central tenet, and a key source of argument, is the assertion that the laws and legal institutions in the U.S. are inherently racist and advantage White people over other races, particularly African Americans.

Critical race theorists question the effectiveness of viewing other races with colorblindness, as advocated by Martin Luther King Jr., who said the metric should be a person’s character. Instead, they advocate adopting a “color-conscious” approach — in other words, the notion that racism can’t be extinguished if people don’t acknowledge race.

Adherents say the theory is a framework or lens for understanding race in history and society to help illuminate a pathway to improving the country. They say it’s used by academics and not something that would be taught to children in a classroom.

Recently, as it’s turned up more frequently as a topic in K-12 education circles across the country, conservatives began pushing back, with some states banning it, or its underlying tenets, from being taught in schools. Nebraska Gov. Pete Ricketts said this week that he opposes it.

Conservative critics say it’s anti-American and racist. They view it as akin to Marxism because while Marxism sees human events as a struggle between economic classes, CRT frames them as a struggle between racial oppressor and oppressed. Some of the theory’s advocates decades ago were Marxist scholars.

Adherents say the opposition is aimed at blunting the momentum that George Floyd’s murder generated for the social justice movement.

Learning Community Council member Tim Hall, one of the critics, posted his concerns about the webinars on Facebook before the meeting.

“The Buffett Institute receives over $100,000 per month of your tax dollars as a partner with the Learning Community,” Hall wrote. “We all know that the University of Nebraska receives hundreds of millions in tax support. It is unacceptable that such racist ideology propaganda is being pushed upon our children, and especially wrong that it is funded with your taxpayer dollars.”

Jackson said she knows of no child being taught CRT. She said nothing in the webinars suggested that Black children were victims and Whites were oppressors.

State Sen. Justin Wayne: Juneteenth a reminder that fight for equality is ongoing

The “anti-racist” label has risen in use recently, reflecting the view that it’s not enough to just be against racism. Anti-racists say people must actively identify and root it out.

The free and voluntary webinars were open to all early childhood professionals who serve young children, birth through third grade, in the Omaha metro area.

Owen said the institute chose the topic at the request of educators, in light of the racial unrest last summer.

“Over and over again, we were hearing from providers and teachers that it would be helpful to have more tools in their tool kits when asked questions, difficult questions, about race,” she said.

She said it’s not accurate to say the webinars contained content reflecting CRT.

“What we are addressing is anti-racism,” she said.

“We define anti-racism to be actively opposed to racism.”

She said the webinars were in line with a call to action made last summer by Nebraska Education Commission Matt Blomstedt, who said his department would “promote active antiracist teaching and leading ...”

Midlands Voices: Juneteenth is a holiday for everyone

“Anti-racism training is the active part of critical race theory,” he said. “This is where the theory becomes action.”

Allie French of Nebraskans Against Government Overreach, whose members demonstrated against CRT, said anti-racism is: “Same wolf in a different sheep’s clothing.”

“We are fighting for the preservation of our country, and we believe that the agenda that they’re pushing threatens that preservation,” she said.

The World-Herald reviewed recordings of the webinars.

The first webinar, on March 24, was titled “What is Antiracist Education?” It featured Terry Husband, a professor of early childhood literacy in the College of Education at Illinois State University.

The second webinar, April 28, was titled “Racial Socialization as Resistance to Racism.” The presenter was Dalhia Lloyd, program specialist in family and community at the Buffett Institute.

The final one, May 26, was intended to provide local teachers’ perspectives on anti-racism in their classrooms. That one was postponed, according to Owen, because “the panelists were unavailable.”

In the first webinar, Husband told attendees that if they wanted to learn more on anti-racism that CRT was “a really great place to start.” He also suggested that they could look at “Critical Whiteness Studies” and “Critical Ethnic Studies.” Two books mentioned in a slide were “Critical Race Theory” by Richard Delgado and Jean Stefancic and “Foundations of Critical Race Theory in Education” by Edward Taylor, David Gillborn and Gloria Ladson-Billings.

Husband told webinar attendees that anti-racist education is needed because teachers can act in a biased or racist way, even without knowing it, and because curriculum is often Euro-centric or “whitewashed,” minimizing the history, experience and voices of people of color.

“A lot of what’s taught in school is male, pale and stale, meaning it’s always about old White men, White men who are passed away, and White men who we have very little contact with,” he said.

Husband said that hopefully schools can create students “who will go out and become anti-racist agents.”

He said anti-racists are fighting against White supremacy and whiteness, which he defined as the notion that White is the default culture.

Teachers need to move away from being colorblind and become “color-conscious,” he said. People are either a part of the solution or a part of the problem, one slide said.

Alexa Yunes-Koch demonstrated outside the meeting in support of anti-racist education. She said she was with the University of Nebraska-Lincoln Racial Justice Alliance, a student organization.

She said people who oppose critical race theory don’t know what it is.

“It’s an academic framework, used mostly in higher education,” she said. “It’s not something you could teach an elementary student. It’s a framework through which you would teach.”

Megan Cardwell, another group member, said the theory doesn’t blame any group but argues that, despite progress, race is still embedded in all aspects of society.

“Yes, if we look at today versus when individuals were enslaved, we see progress,” she said. “But when we look at things like garnering generational wealth, Black and brown folks who didn’t have rights to property are far, far behind in passing on that wealth.”

Kerry-Ann Escayg, an assistant professor of early childhood education at the University of Nebraska at Omaha who appeared in the webinars, told the council: “Racism exists. It is the foundational fabric of the United States.”

Critics are not only mischaracterizing CRT, but their opposition reflects “an insidious coupling of aversion to facts with a desire to retain systemic inequities,” she said.

Anti-racist education provides children of color with an understanding of their society, she said. It is, she said, grounded in accurate history and helps both Black and White children “envision a more just, equitable society,” she said.

After about four hours of public comment and discussion, council members voted to approve the contracts.

The council voted 8-3 to approve a four-year $13.8 million contract with the Buffett Institute to manage the Superintendents Early Childhood Plan, a bundle of programs for schools. Participating districts get $5.5 million of that.

The council also approved a $900,000 four-year contract with Buffett to evaluate the plan annually.

How Groundhog Day is connected to astronomy

How Groundhog Day is connected to astronomy

Pregnant panda! Watch as this giant panda gets an ultrasound

Pregnant panda! Watch as this giant panda gets an ultrasound

Attacks on a previously little-known academic concept cast a chilling shadow over needed discussions of race.

Cheryl Logan will earn an annual salary of $313,890 during the coming year — an increase from her current base salary of $300,000. The increase is her first since joining the district in 2018.

Should Nebraska schoolkids learn 1776 or 1619 as the nation's birthday?

Gov. Ricketts has called for removing 1619 Project curriculum from the State Education Department's website. The project seeks "to reframe American history" by considering the consequences of slavery.

Critical race theory did not come up at Friday's meeting of the Board of Regents of the University of Nebraska, but Regent Jim Pillen said afterward that he will "oppose it as your governor."

It's no joke: Millard North grad is national champ in humor

It is the first new agency to launch during Gov. Pete Ricketts' tenure, according to the governor's remarks. Members were appointed by Ricketts after a selection process.

Republican gubernatorial candidate and NU Regent Jim Pillen is asking the Board of Regents to adopt a resolution opposing "any imposition of critical race theory" as part of university curriculum.

Matt Innis, who has been holding public meetings opposing both CRT and comprehensive sex education, said he's in favor of teaching accurate history, but the advocates of CRT are pushing an agenda.