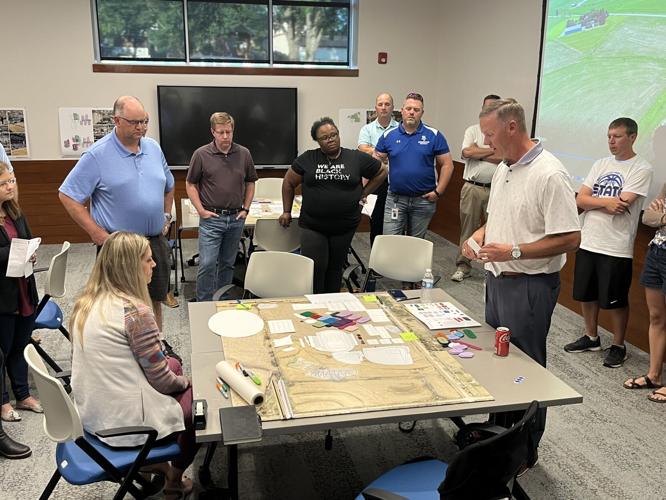 Bennington Public Schools administrators, board members and community members join architects recently to discuss the construction plans of a potential second high school that will be part of a bond issue this fall. 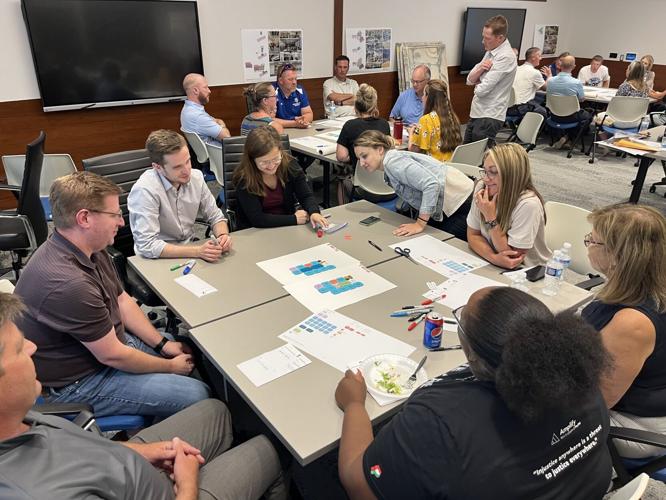 Bennington Public Schools administrators, board members and community members join architects to discuss the construction plans of a potential second high school that will be part of a bond issue this fall.

The Bennington Public Schools will soon start seeking community input for a bond issue that will go before voters this fall.

Though the full scope of the bond remains undecided and will ultimately be determined by the community input, according to the district, the main project will be a second high school to accommodate a growing student population. If the bond is approved by voters, the district could start construction by spring 2023.

Much like the scope of the bond, many details about the high school are up in the air, such as the location, size and cost. Stacy Hawn, spokeswoman for Bennington, said the price for just the building could range from $102 million to $112 million, but community members will be presented with several options that could be added to the project.

“There are a lot of different line items that we can build or hold off for an additional bond issue,” she said. “We need the community input to see what they want and what they would support in a bond issue.”

Those items include an indoor pool, stadium, athletic fields, tennis courts, more student capacity and a young adult program for students from 18 to 21 years old, according to school board documents. If the public wished to include all the features, the price range could jump from $137 million to $151 million.

The new high school would likely include performing arts spaces, specialized labs, rooms for students with special needs, student support services, a media center and an auditorium with a stage, orchestra pit, sound rooms and dressing rooms. There would be labs, food services spaces, faculty and staff offices, and a space dedicated for physical education with a competition gym, auxiliary gym, weight room, wrestling room, team meeting rooms and more.

After a nearly six-month process, the Bennington school board selected Hausmann Construction to be the construction manager at risk for the potential high school at its meeting in June. Omaha’s DLR Group is the architect for the project.

“You bring in a construction manager early in the process to work alongside the architect, and the architect is still designing the building, but doing it with input from the construction company,” Bennington Superintendent Terry Haack said. “So hopefully, there’s less confusion down the road.”

Haack said the district has already hosted meetings intended to help design what the high school might look like. One recent meeting was Thursday night, with administrators, board members and specific community members giving input.

In addition to seeking feedback for a second high school, Bennington wants input on the entire bond issue, which could include other projects, Hawn said. People will be able to learn about several options, including the continuation of the current high school’s stadium renovation, adding a sixth elementary school, HVAC renovations, land acquisitions and more.

If passed, the bond would likely result in an increase to the district’s tax levy, though the increase will depend on the size of the bond.

The Bennington community will start receiving information via mail the week of July 9, Hawn said. Phone surveys will begin July 11. Three public forums will follow from 6 to 7:30 p.m. on July 19, 21 and 25 at Bennington High School, 16610 Bennington Road.

The potential high school is just one of the ways Bennington is trying to accommodate a fast-growing student population.

Bennington is on track to open two new schools in August to help alleviate numbers at other buildings. Stratford Elementary and Bennington South Middle School were built together at the southwest corner of 168th Street and Military Road and are scheduled to open nearly two years after construction began.

Both schools were part of the district’s last bond issue in 2020, which cost $72 million and also funded renovations to the district office, high school stadium and other facilities.

If this year’s bond passes in the November election, the second high school could be completed by summer 2026.

“The biggest key is nothing is decided,” Hawn said. “We truly need community feedback on what they would like.”

Papillion La Vista Community Schools officials are floating the idea of a $129.9 million bond issue to help prepare for future growth and address a long-running dispute over an athletic facility.

Burke High School is using a new strategy this year to improve student attendance. Students with more than three unexcused absences won't be allowed to attend the homecoming dance next month.

Bennington Public Schools administrators, board members and community members join architects recently to discuss the construction plans of a potential second high school that will be part of a bond issue this fall.

Bennington Public Schools administrators, board members and community members join architects to discuss the construction plans of a potential second high school that will be part of a bond issue this fall.