Fauci now supports national mask mandate, says US 'not in a good place.' Get the latest.

'We are in a pandemic': OPS board members support suspension of fall sports
15 comments
Share this
{{featured_button_text}}
1 of 2 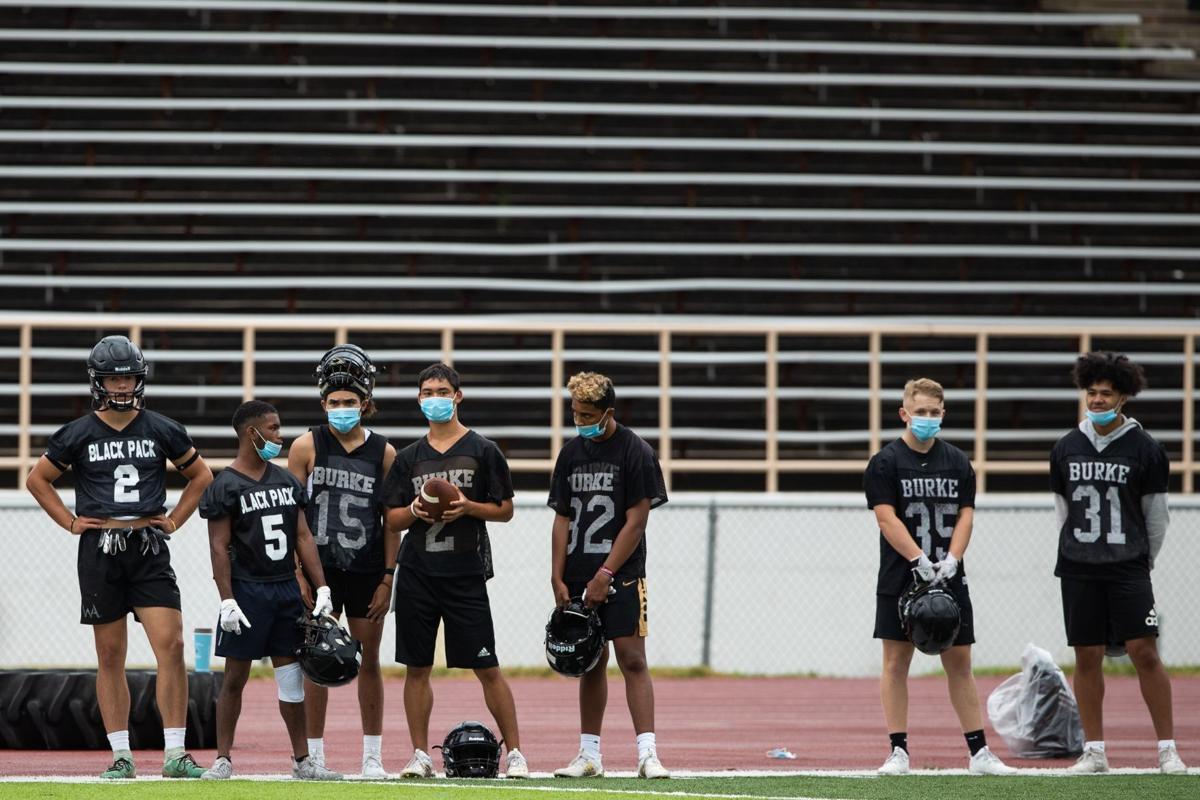 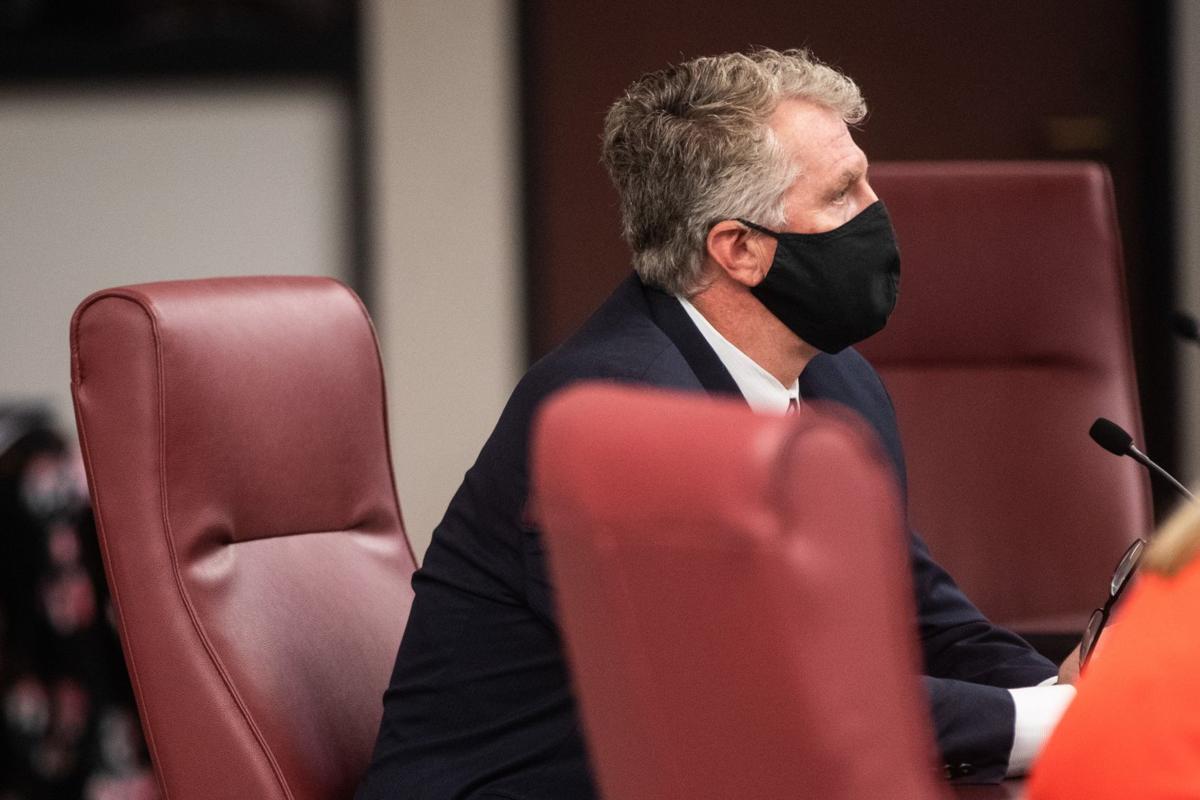 Stephen Eubanks, the supervisor of athletics for OPS, speaks during a special Omaha Public Schools school board meeting on Tuesday.

Omaha Public Schools board member Nancy Kratky said she’s getting a lot of mail these days from parents and athletes who want to play sports this fall.

The notes say OPS was being careless when it suspended sports while all 54,000 students do remote learning because of concerns about the coronavirus. Other notes say OPS is being too cautious.

According to Kratky, in one note a mom advocating for sports to resume wrote, “If another kid gets COVID, so what?”

“And that is why we are here tonight,” Kratky said of the note. “So what. That’s what we need to think about.”

Facing criticism from athletes and parents, several members of the OPS board on Tuesday said they support the district’s decision not to play sports. Only one board member, Lou Ann Goding, said she wanted to see kids play this fall.

The OPS board met on Tuesday night for a special meeting to discuss remote learning, plans to get students back in the classroom for the second quarter of the school year and athletics.

OPS students have been doing remote learning since school started in August. While the students do remote learning, the district has suspended all sports and activities.

Last week, dozens of athletes and parents gathered outside OPS headquarters at 30th and Cuming Streets to demand that OPS officials let them play.

Last week OPS officials announced that they would still try to play fall sports, but in the spring.

Athletic directors have met multiple times to look at the feasibility of playing fall sports this spring, Eubanks said. He said it’s not an easy solution, and when coaches were surveyed about the idea, there was both negative and positive feedback.

Some fall coaches also coach in the spring. There are more club opportunities for sports like volleyball and softball in the spring. And there are facility conflicts over field space.

Eubanks said he has reached out to the NSAA and was asked if OPS would be willing to play other teams that might not be able to finish seasons because of cases of COVID-19. The district also might look to play teams in other states that did not have a fall season this year, Eubanks said.

“Every athletic director and coach that I’ve talked to feels the same way that our athletes feel,” Eubanks said of the suspended season. “They’re disappointed. They’re heartbroken. They want to be out there working with kids.”

Eubanks said the district is working on guidelines for a safe and responsible return of winter sports and activities as conditions permit. Winter sports are scheduled to begin Nov. 16.

OPS officials are also working on plans to get students back in classrooms for the second quarter of this school year under the Family 3/2 Model. The model divides students into two groups, each of which would attend school in person part of the week.

If students return to school under the Family 3/2 Model, Eubanks said, student-athletes would have to be allowed to attend practices and contests on the days they are not doing in-person learning.

“If that is allowed, athletics at the high school level can be successful and can be done safely,” Eubanks said. “But without that we cannot compete at the NSAA level with students only coming partially or competing on the days they’re present.”

Goding said she would like to see OPS athletes playing all fall sports. She asked if athletes in more individual and socially distanced sports like tennis and cross country could compete.

“I would like to see us try to do something to help these students,” Goding said. “And if we’re not going to allow athletics, I just want us to be able to communicate that out so they can make choices.”

Several athletes have chosen to transfer out of OPS so they can play sports this fall in other school districts.

Board member Ricky Smith said he used to coach in the district, so he knows the importance of sports, but he feels just as strongly about keeping kids alive. He said he’s more worried about the 54,000 students in OPS schools than the 11 kids in the huddle.

Board member Tracy Casady said it’s easy to suggest that one sport, like cross county, be allowed, even if a close-contact sport like football can’t be played, but she said that would go against OPS’s commitment to equality and fairness.

She said she is disappointed that other metro area districts have not joined OPS in not playing sports this fall.

“We do not want to be doing this, but we are in a pandemic,” Casady said. “And that is what I think people are losing sight of.”

Check out our detailed look at how COVID-19 is affecting metro Omaha schools.

OPS seeks to play fall sports in the spring

The Omaha Public Schools is seeking to play its fall sports in the spring.

Through the family engagement program, caregivers can enroll in courses on parenting, life skills, wellness, school success and leadership.

'Let us play': OPS parents, students gather to protest for sports to be reinstated

All seven of Omaha Public Schools' high schools were represented at a demonstration asking the district to lift its suspension of sports.

3 OPS board members seek special meeting on district's 'next steps'

The board members are asking about the metrics that will determine when students will return to school and whether OPS is prepared to bus students to school if there’s a shift from remote learning.

OPS sticks with decision to suspend sports, says to frustrated athletes, 'We hear you'

OPS Superintendent Cheryl Logan is standing by her decision to suspend athletics and activities this fall after athletes took to social media in an effort to convince her to allow sports.

From wiggly children to parental faux pas, iPads are windows into homes of OPS students

Several parents said there’s a night and day difference between what OPS offered this spring when schools abruptly closed and what’s being offered now.

High school sports schedule and notables as published in The World-Herald on Sept. 10.

Fear of what might happen if the fall sports seasons began didn’t win out over the single thing anyone could control — the ability to give it a shot.

Game of the Week: What to watch for during Howell-Dodge vs. Cross County

Here's what to watch for during this week's Pinnacle Bank Game of the Week.

Jake Appleget’s fumble recovery and interceptions by Derek Branch and Max Buettenback set up the Lincoln Southeast offense for three consecutive touchdowns in the first 14 minutes of a win over Grand Island.

Class B No. 5 Elkhorn rode a strong defensive effort to a 13-7 home win over No. 1 Waverly.

Check out the Nebraska high school softball scores from Sept. 10.

Check out the Nebraska high school volleyball scores from Sept. 10.

Athletes tell OPS board they want to play; parents give mixed reviews of remote learning

Thursday night, the OPS board heard a mixture of praise, criticism and pleas from almost two dozen people during the public comment period.

Pitcher Kathryn Cunningham threw her first complete game since opening day, and she also drove in the winning run for Bellevue East.

Check out the Nebraska high school volleyball scores from Sept. 11.

Check out the Nebraska high school softball scores from Sept. 11.

OPS students aren’t the only people at risk when schools reopen, Superintendent Cheryl Logan said. “And on the other hand, we can’t stay home forever."

Dr. Mark Rupp, chief of the infectious diseases division at UNMC, described cases as being in a “tenuous holding pattern” locally. But he expects infections to go up over the next two to four weeks.

The Storm moved their record to 13-0 with an undefeated run through the five-team, round-robin event. Elkhorn South, ranked No. 4 in the Nebraska Top 10, has not dropped a set this season.

"I think I came out today and proved myself," Fremont's Alex Bigsby said. The Fremont senior won at No. 1 singles.

Check out the Nebraska high school softball scores from Sept. 12.

Check out the Nebraska high school volleyball scores from Sept. 12.

The Douglas County Health Department said last week's positivity rate for coronavirus tests was 7.4% That compares with 10.5% for the week ending Aug. 15, when the Omaha City Council passed the mask mandate

Omaha Westside's boys tennis team won their second invitational in less than a week as they claimed the eight-team Millard North Invitational.

At Monday evening's board meeting, teachers told the school board that they are exhausted trying to balance the district’s constantly changing plans.

OPS Superintendent Cheryl Logan said the plans are more than a chance to screen and surveil for COVID-19 cases. The effort would allow for other kinds of data gathering.

Stephen Eubanks, the supervisor of athletics for OPS, speaks during a special Omaha Public Schools school board meeting on Tuesday.