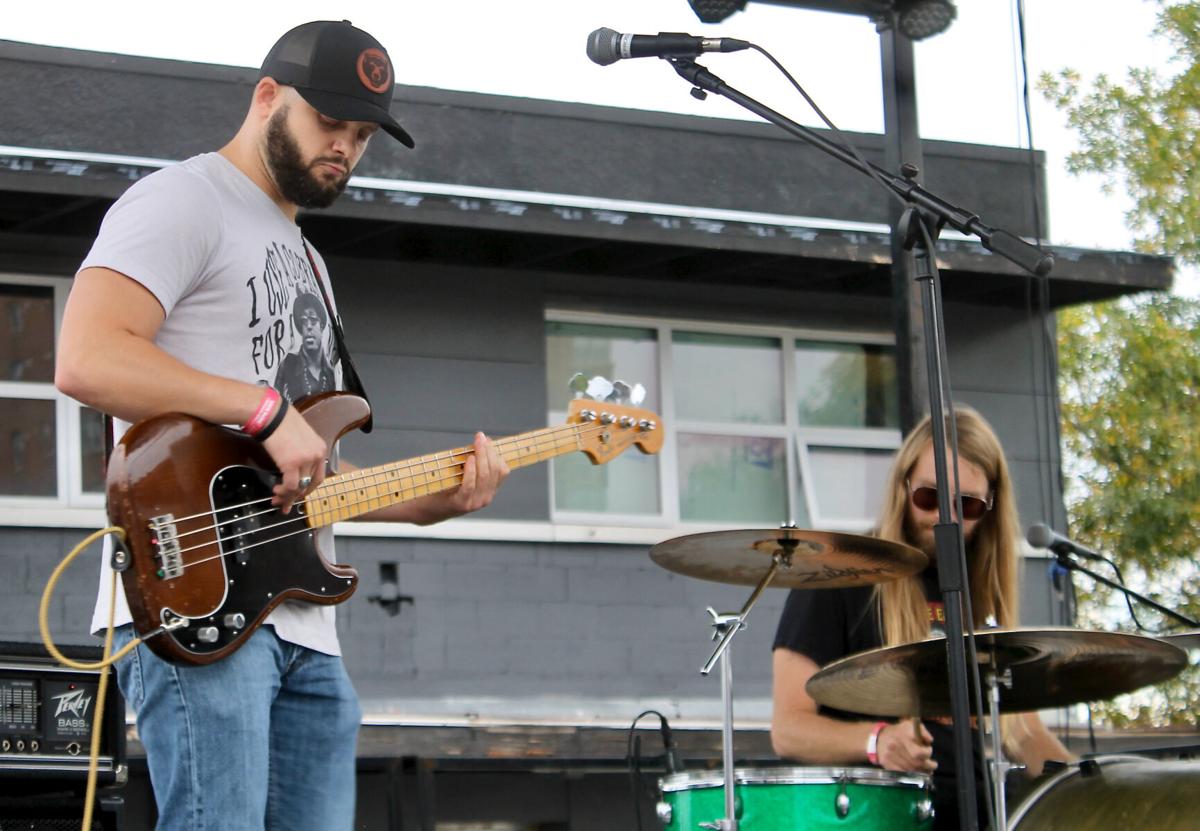 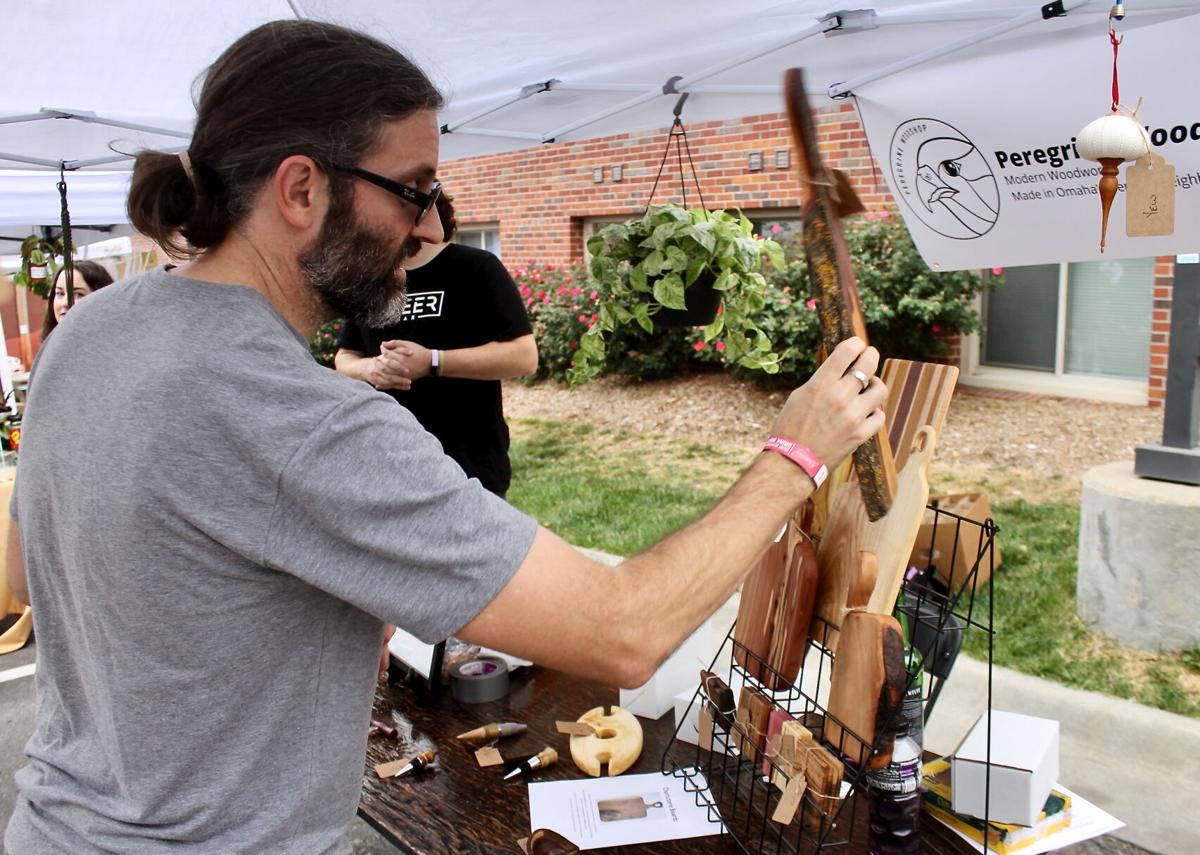 Andy Miller checks out an item crafted out of red oak by Terry Streetman at Farnam Fest. 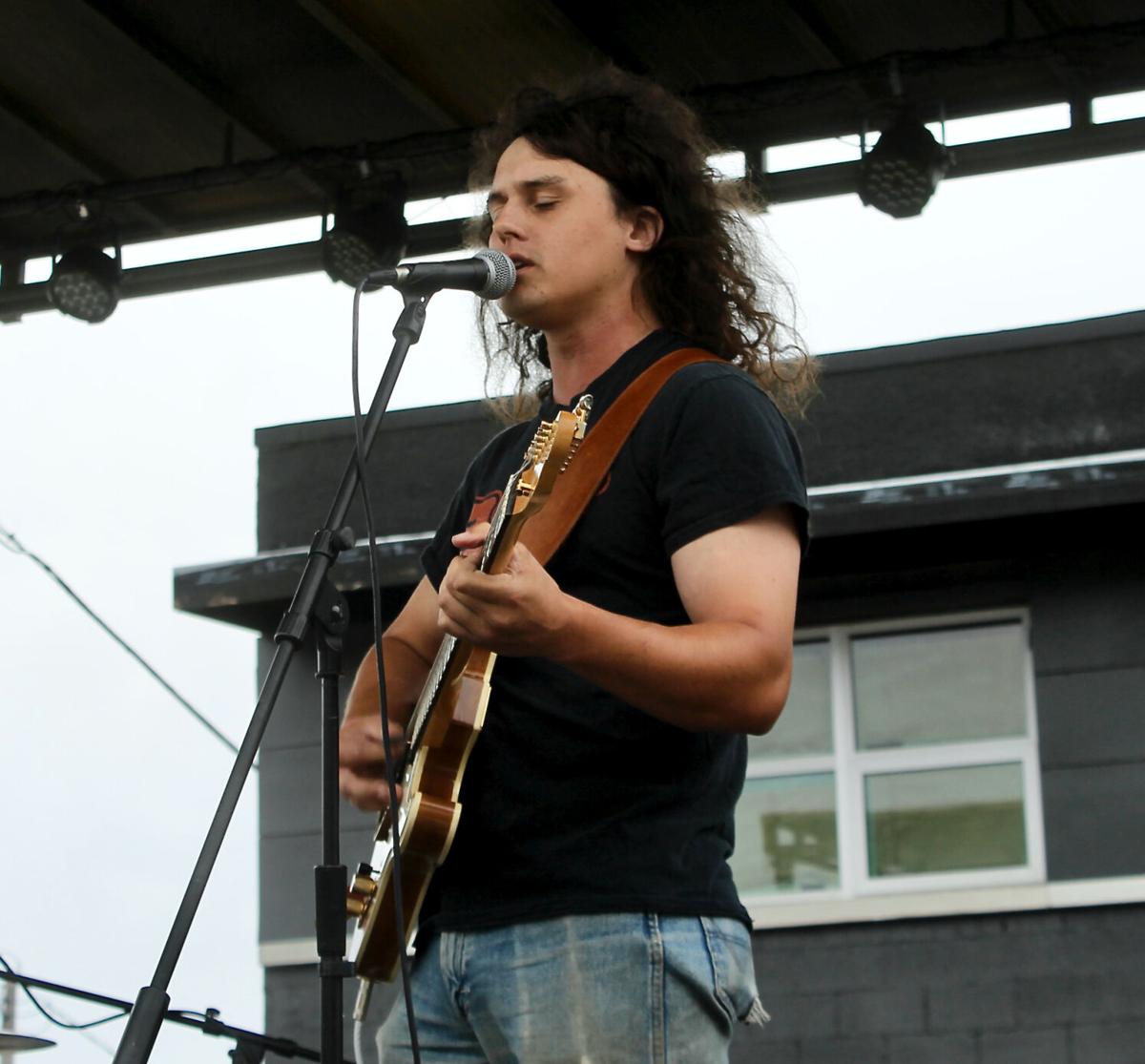 Judging by the hundreds of people, wagging tails and boisterous live music, a cloudy day Saturday did nothing to darken the spirits of those who attended Farnam Fest.

Held primarily in an alley just north of Farnam Street and along a block of 40th Street, the celebration brought people throughout the Omaha metro area to the Blackstone neighborhood, which has evolved into one of the city’s hottest areas.

Now in its 13th year, Farnam Fest featured what organizer Rachel Bythwood Ayers described as “something for everyone,” including a dog show, an adult spelling bee and, of course, festival staples like food trucks and arts and crafts booths.

As Left Handed Country kicked off the evening’s live music, Ashley DeVrieze of Omaha was up the alley with her watercolor and acrylic paintings on display. As someone who draws her artistic inspiration from nature, DeVrieze was in her element.

“I love this neighborhood and this atmosphere,” she said.

AfroCon is for all 'nerds,' no matter who you are

A few booths over, Terry Streetman and his wife, Emily, drew interest with Terry’s handcrafted woodworking materials and Emily’s plants. Made from locally sourced materials, the wares the Streetmans brought included a piece of red oak artwork made from a tree that was damaged by a storm in their Benson backyard.

The vendors at Farnam Fest were a community within a community, Terry said. Farnam Fest was his first in-person show since diving into woodworking less than three years ago. Emily started to grow houseplants during the onset of the COVID-19 pandemic.

“I’ve always loved hearing about Farnam Fest,” Terry said. “We know a lot of these vendors from other events. We wanted to come and be out in the community.”

Ghouls and Glow at Omaha zoo returns this weekend

Some of the major new attractions to Farnam Fest were the brews Blackstone bartenders offered. That included the full bar of local craft beers and mixed drinks served up by Blackstone Social.

As the Blackstone District continues to evolve, organizers and sponsors say Farnam Fest serves as an opportunity to reflect on the success of the neighborhood while remaining optimistic about its future.

“People should feel proud of what’s happened here, especially the small businesses that chose to invest in the neighborhood,” said Adrian Hernandez, senior vice president of Dundee Bank. “It feels good to reflect on their success and also see the momentum that we have going forward.”

Andy Miller checks out an item crafted out of red oak by Terry Streetman at Farnam Fest.