Fireworks complaints skyrocket in Omaha, and police say citations are rising
4 comments
Share this
Only $5 for 5 months

Drug the dog. Close the windows. Turn up the TV.

But this year, nothing seems to work for the Omaha family.

The illegal use of fireworks, based on complaints to Omaha police and Mayor Jean Stothert’s hot line, has risen significantly.

Stressed-out dogs, people unable to sleep and veterans rattled by PTSD have been the result, along with divisive arguments among neighbors.

“We cannot really leave the house,” Anderson said. “I cannot take (my dog) for a walk, even during the day.”

Calls to the Omaha Mayor’s Hotline more than doubled this June. This year, the hot line received 112 complaints compared to 43 in June 2019.

Lincoln police saw a 150% increase in complaints in June compared to 2019. The actual number in Lincoln last month was much lower than in Omaha, 295.

The two cities aren’t alone: Complaints are up across the country, from Los Angeles to New York. (Council Bluffs has seen no large jump in complaints, with 214 this June compared to 207 a year ago.)

Fireworks become legal to shoot off in Omaha and Council Bluffs on Thursday, and in Lincoln on Friday. In Bellevue, Ralston, Gretna and Papillion, people have legally been able to shoot them off for a week, and in La Vista since Sunday.

Theories abound on why calls are up: People have been cooped up, so shooting off fireworks is a way to blow off steam; more people are at home to hear them; some families may have more money since vacations and trips to the mall and theater have been curtailed, or pandemic unemployment checks have brought in greater income; and with major displays canceled, beefed-up backyard exhibitions are an alternative.

Fireworks vendors in Omaha reported sales were brisker than usual on their first day, Sunday, similar to increased spending on other things to use outdoors, like bicycles, backyard pools and kayaks.

And the illegal use of fireworks mirrors an increase in some other illegal activity, such as excessive speeding and the firing of guns.

The problem this year, Omaha residents say, is that the fireworks started earlier, have been more powerful and are going off more frequently.

“This has been the worst year in 30 years I’ve lived in this area, and it’s already been going on for a month,” said Jon Blair, who lives in North Omaha. “I don’t mind normal fireworks before 10 p.m., but some of it sounds like bombs exploding, and they rattle the windows.”

Gray said complaints from police have come from all corners of the city, with the highest concentration east of 72nd Street and north of Center Street.

Translating complaints into citations is difficult, and that’s frustrating for Omaha residents. Despite receiving more than 1,000 complaints, Omaha police had issued only five citations as of Wednesday.

The reasons for the gap are varied, Gray said. For most of June, fireworks complaints had to compete with other police calls — in other words, they were a lower priority. And by the time officers got to a complaint, the person firing them off was most likely gone. It was only Sunday that the department began dispatching complaints immediately to officers assigned solely to fireworks complaints. With this targeted enforcement, Gray said, citations are rising.

But there’s another difficulty: Officers have to see a person illegally lighting a fireworks device to give a citation.

If residents have problems with a neighbor, Gray advises waiting until the person isn’t lighting fireworks to talk with them. If the problem is persistent, he said to contact your precinct and request mediation.

In 2015, a Sarpy County man was beaten unconscious when he confronted a neighbor about fireworks. His assailant was given probation.

Omahan Eli Hassler learned the hard way that asking a neighbor to stop shooting off fireworks illegally can end badly. The conversation this week nearly came to blows, he said.

“The fireworks make our existence even more tense than it has to be, especially now with COVID-19 and recent protests,” he said.

Not everyone is upset.

“With the world we live in today, there are way worse things to complain about,” said Omaha resident Misti Miller.

Penny Bless said she’s no fan of the loud illegal explosions, but she’d like to see Omaha lengthen its fireworks season.

“They’re a joy that every child should experience,” she said. “Some of these people are too old, or they’re overreacting. We should celebrate our country. ... It’s a tribute to our freedom.” 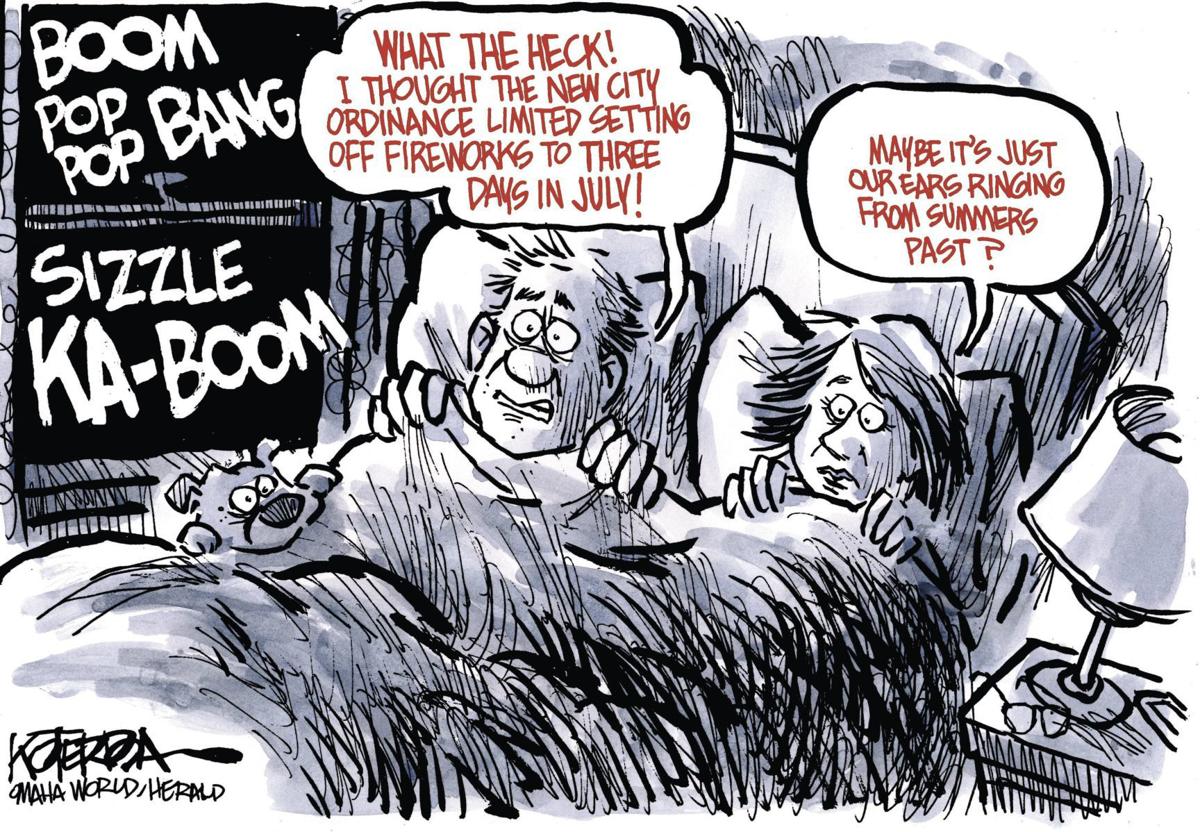 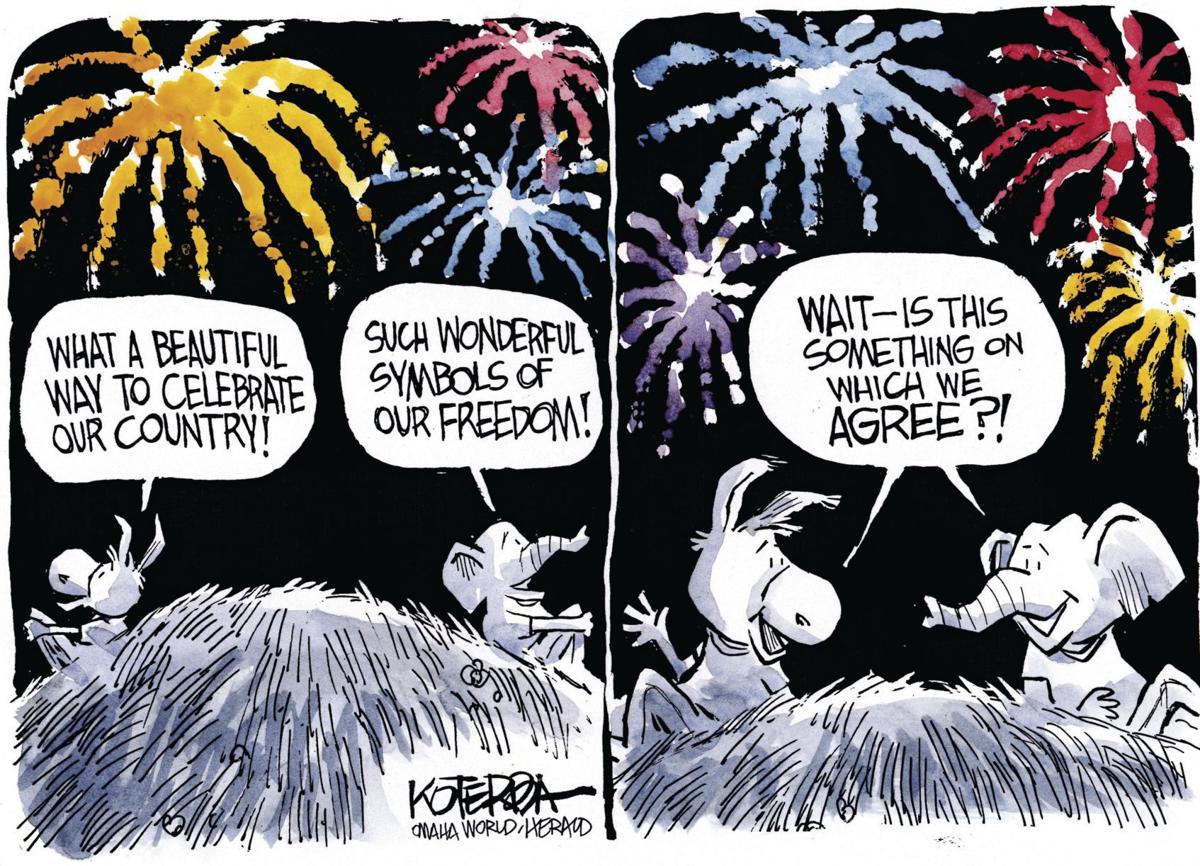 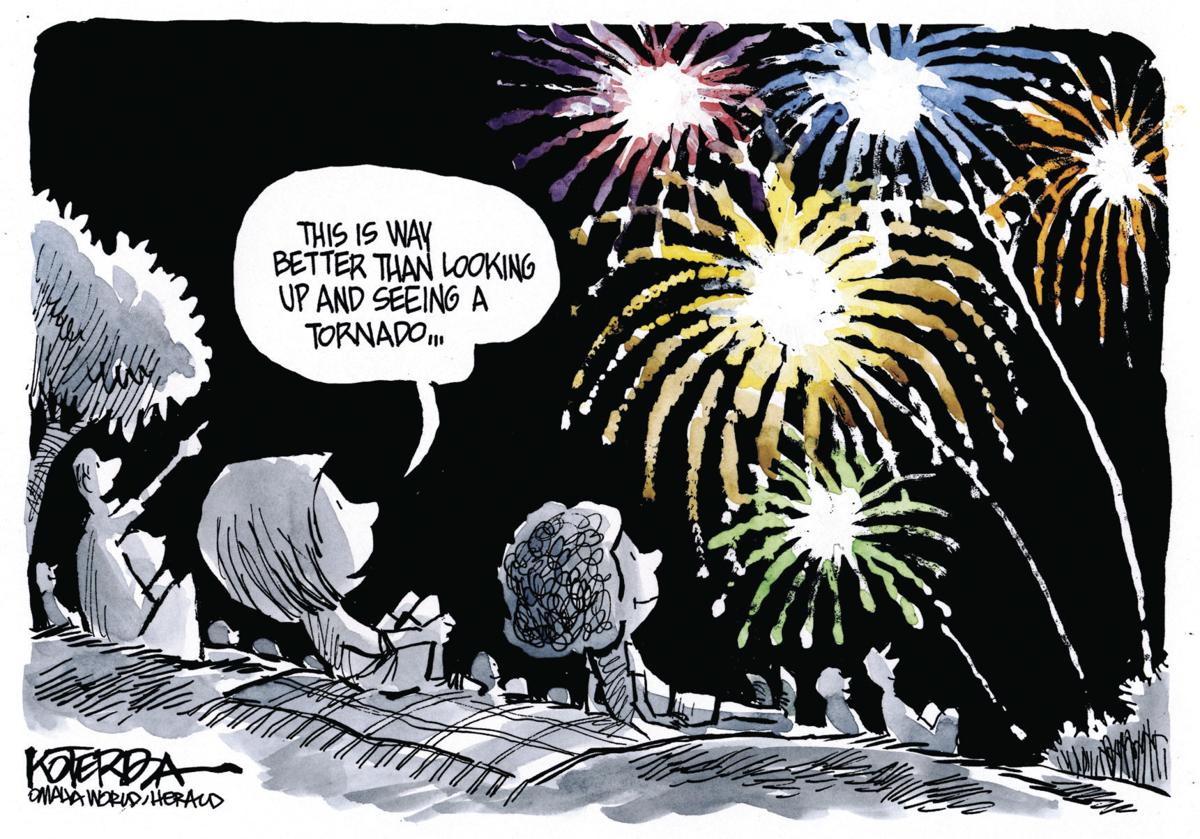 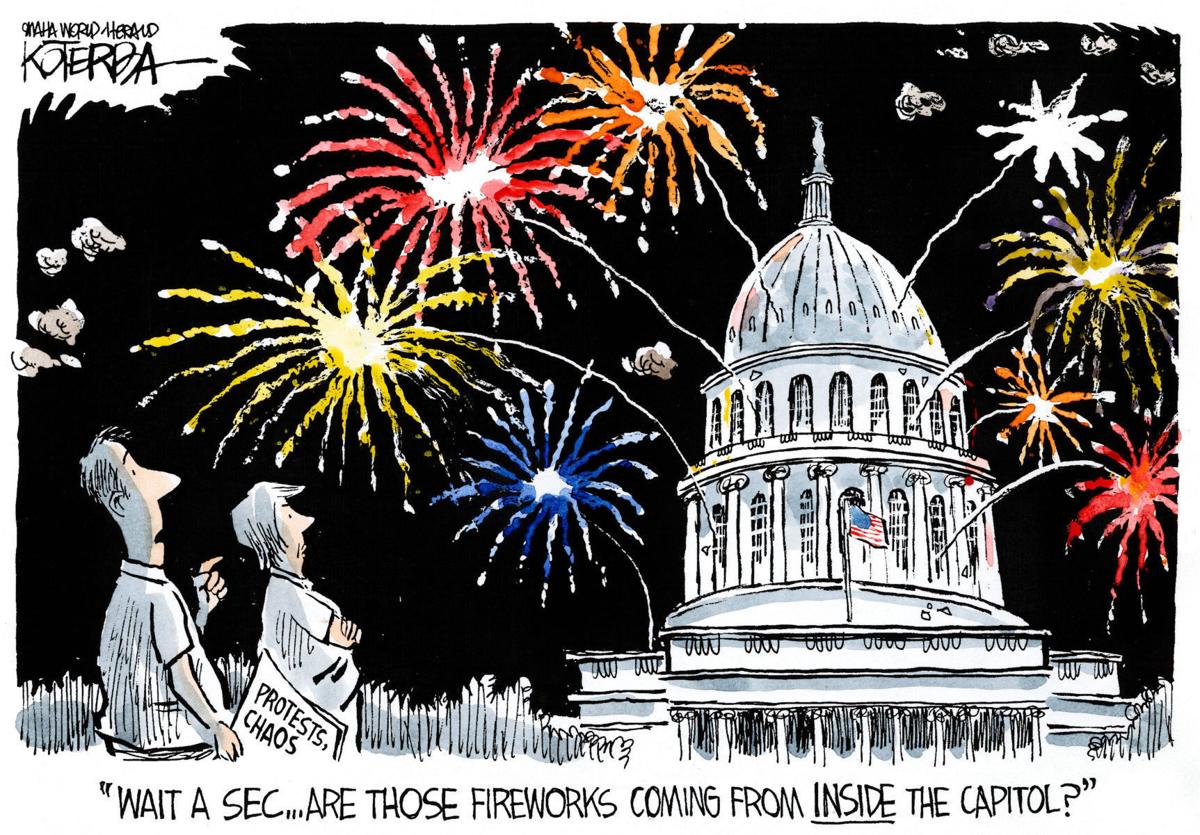 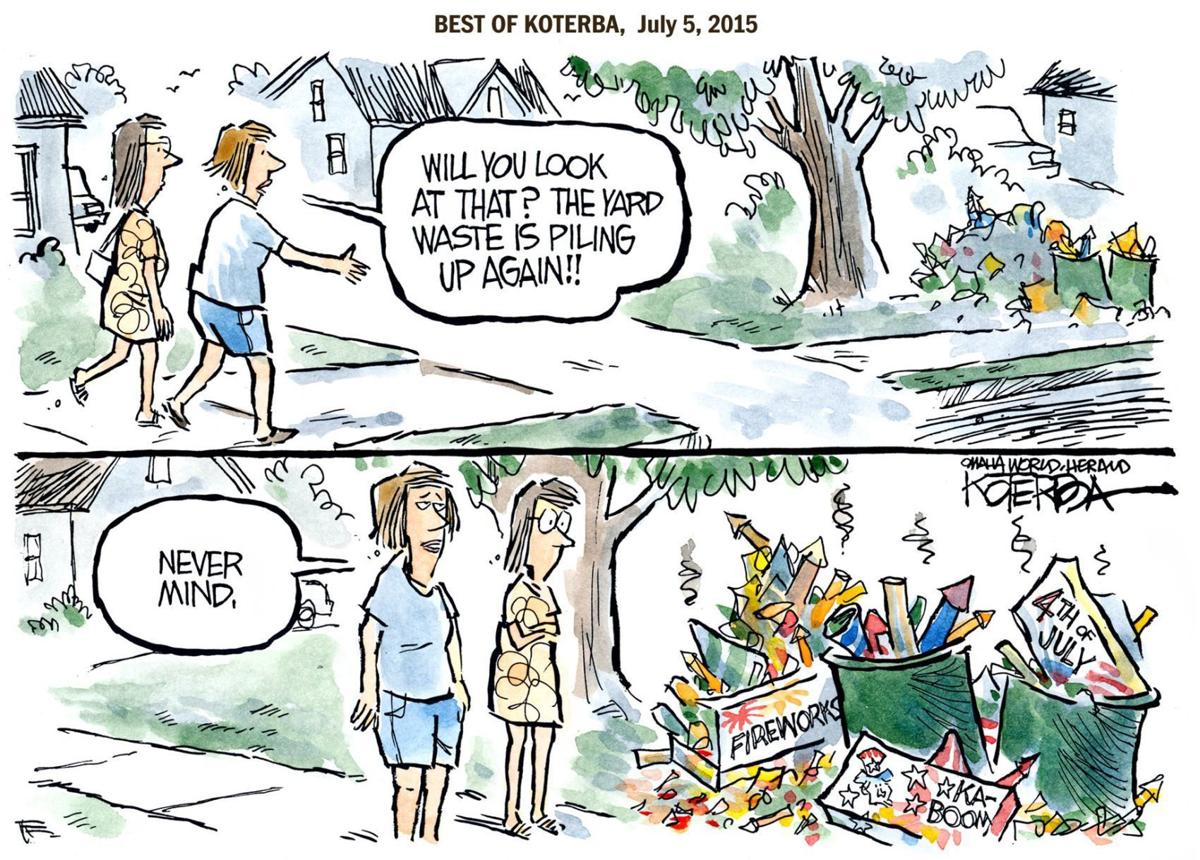 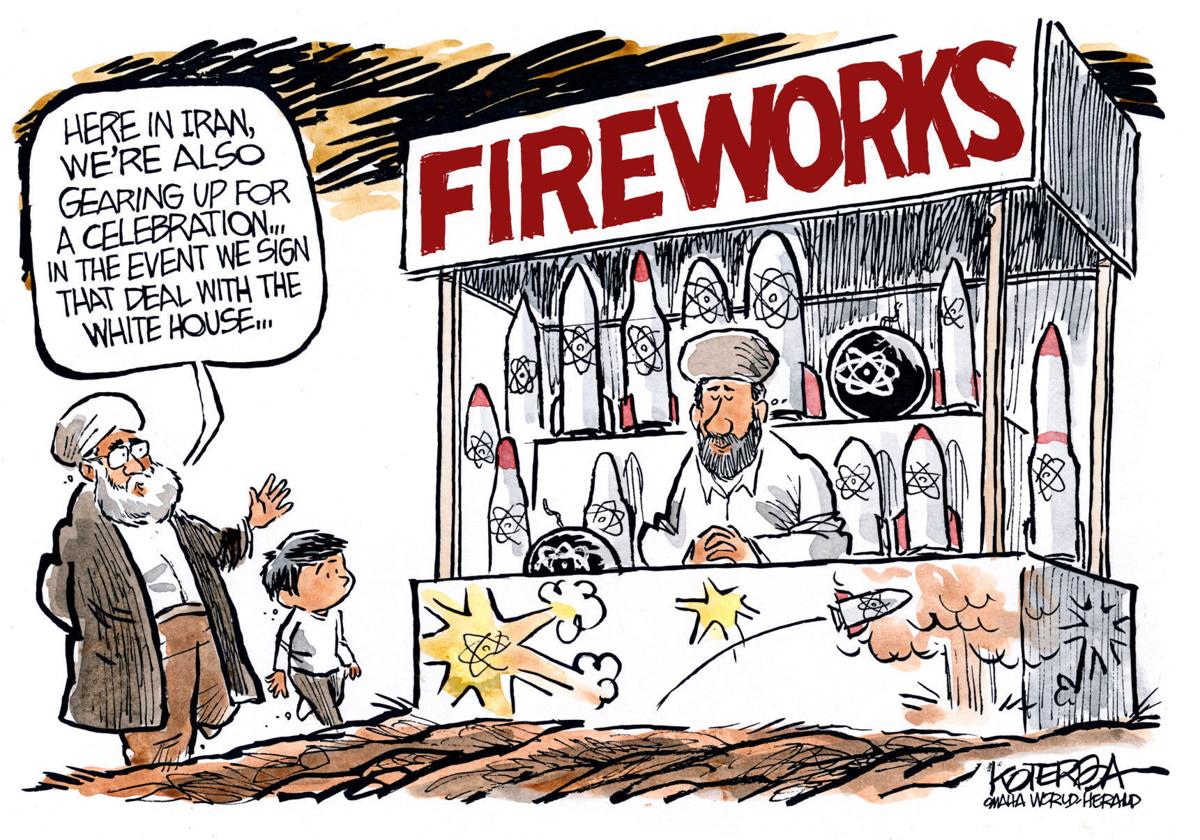 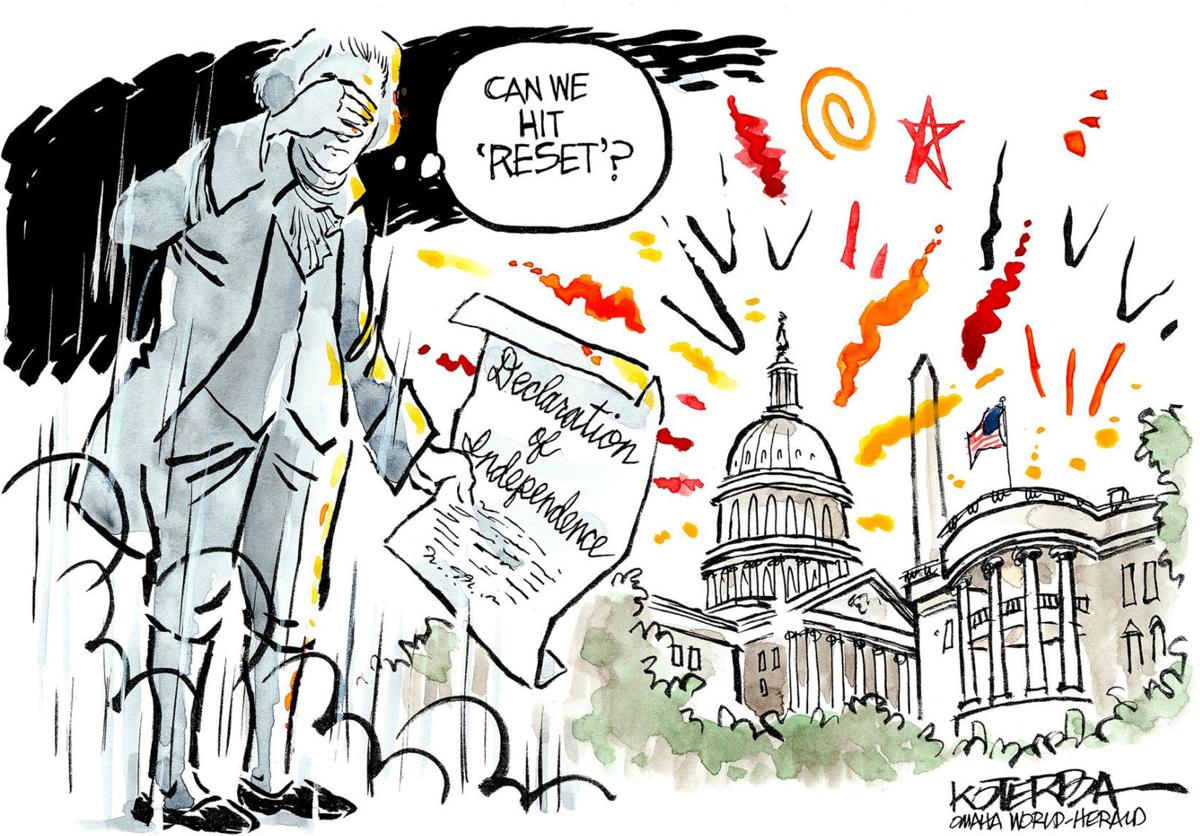 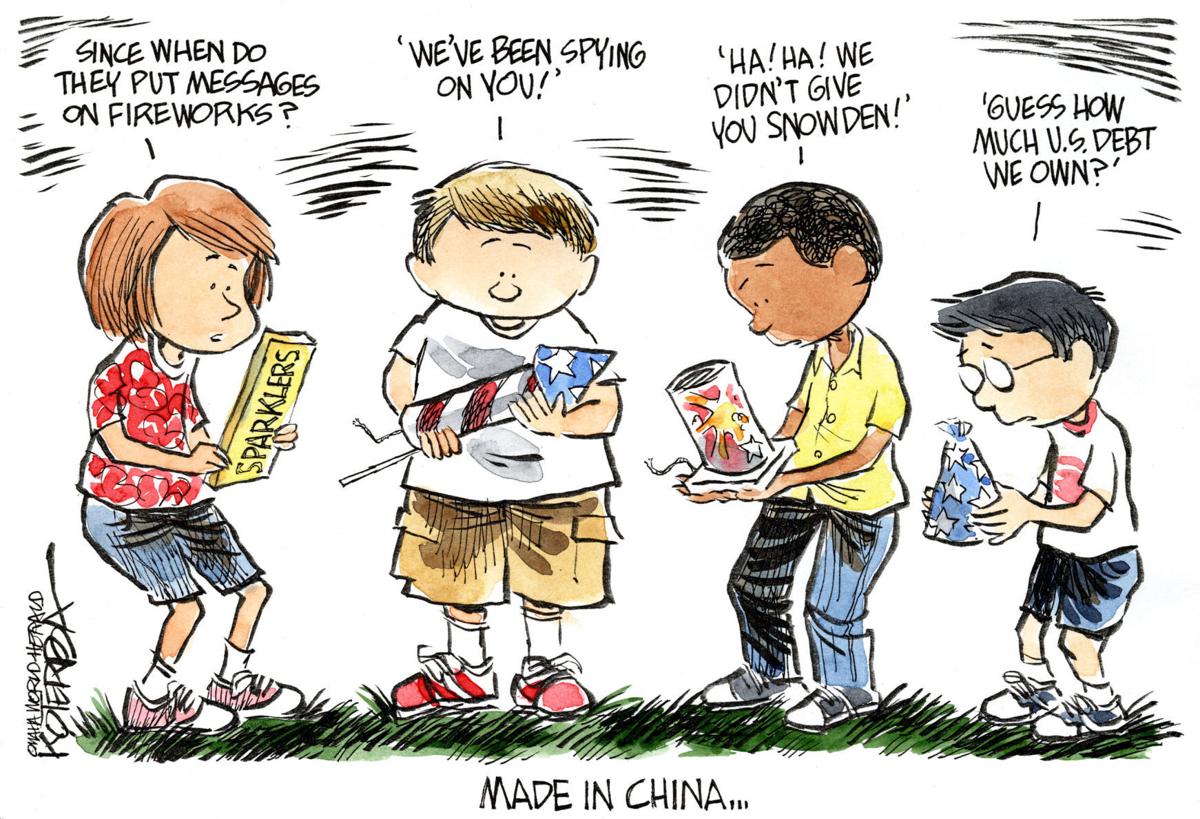 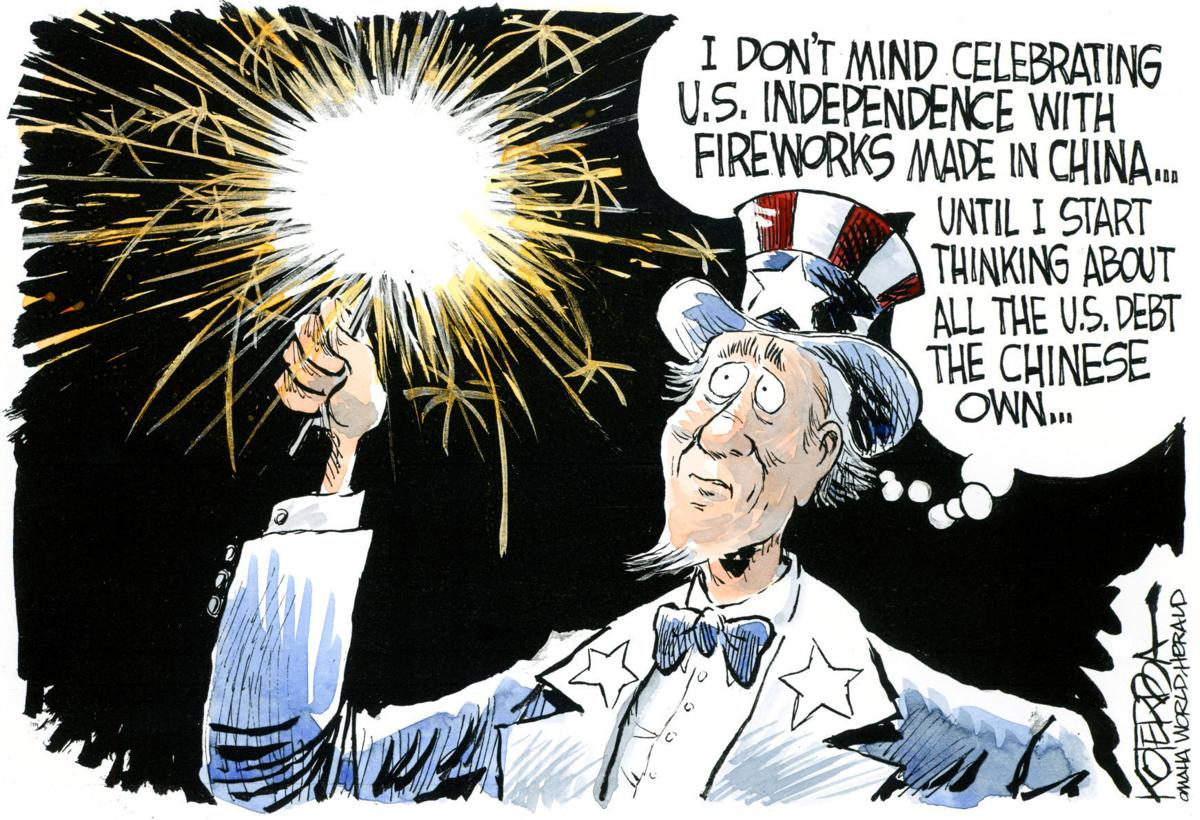 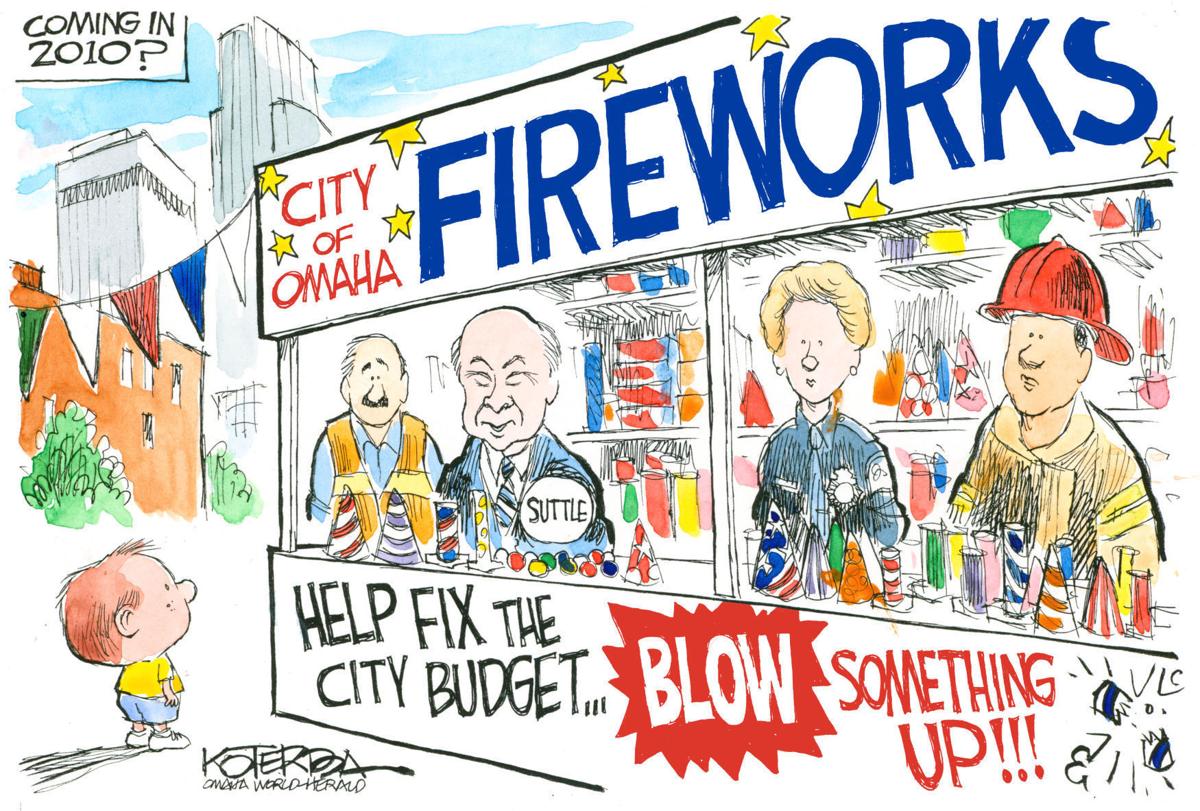 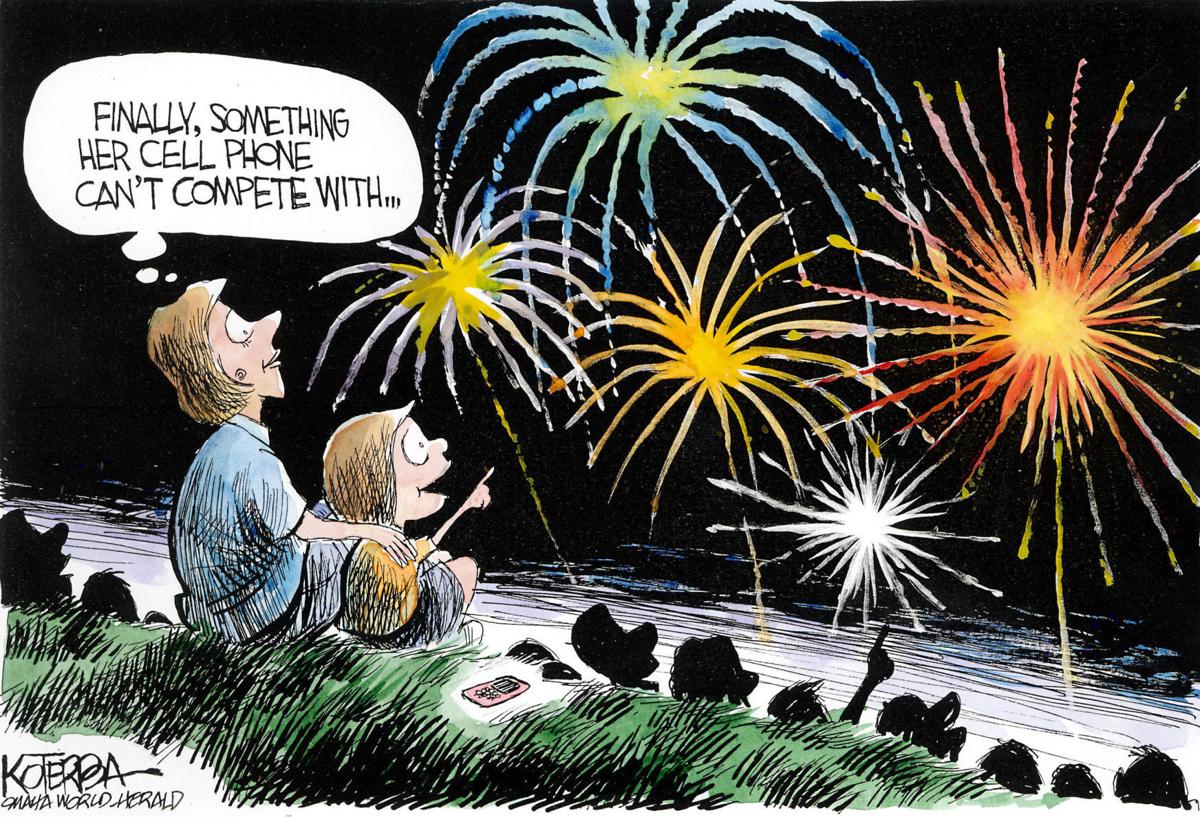 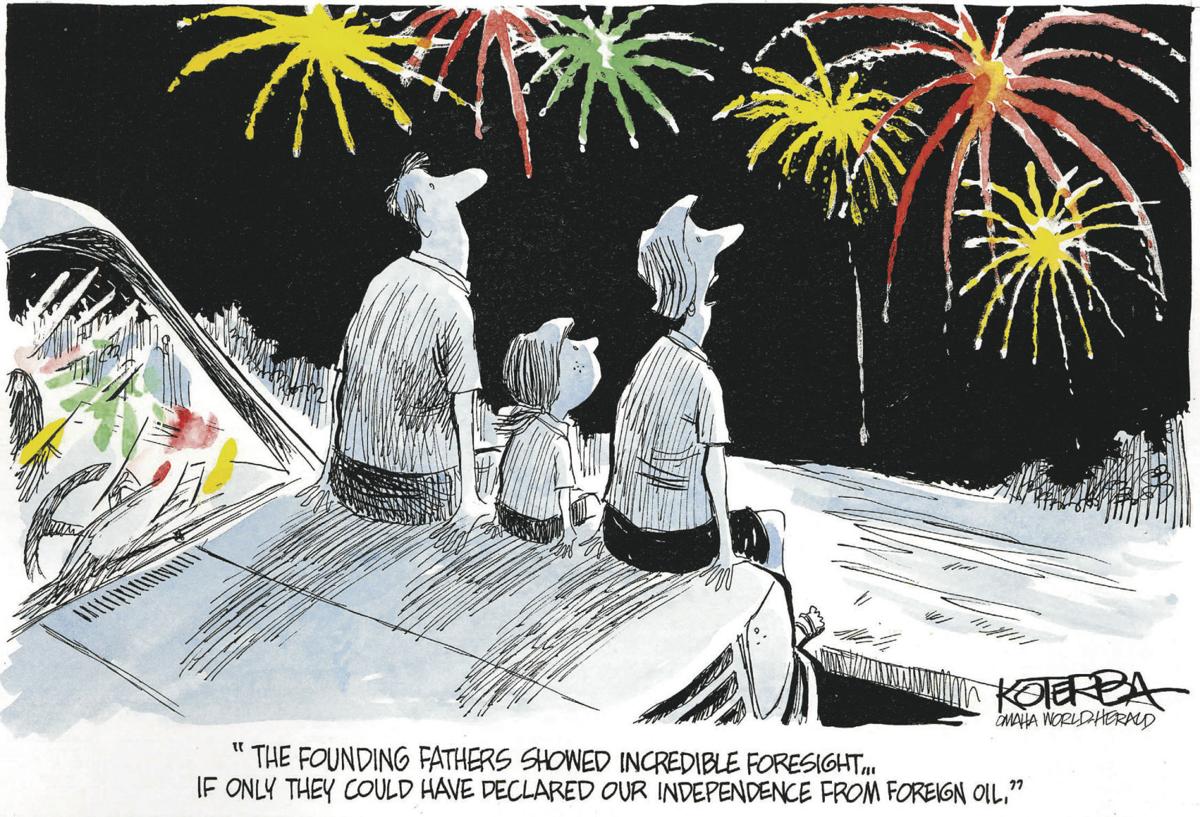 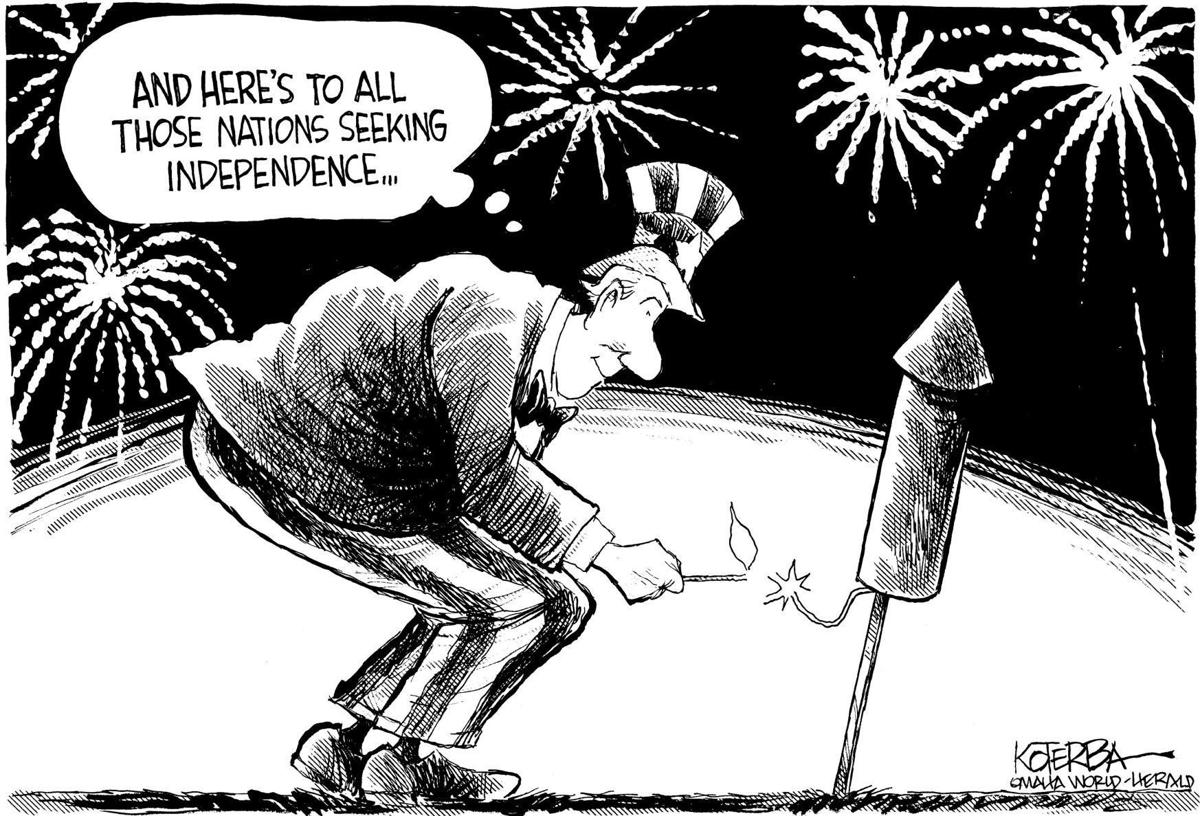 Best of Jeff Koterba: Fourth of July and fireworks cartoons

Dog Gone Problems: Tips to help dogs who are afraid of fireworks

Does your dog hate the Fourth of July weekend? Here are some tips to help.

When I was a kid, Fourth of July was my favorite part of summer.

Omaha's first day of fireworks sales were off to a sizzling start Sunday. Central High wrestling coach Jimmie Foster said sales at the team's booth were the best he's seen for an opening day.

Here's where you can see Fourth of July fireworks in Omaha

The Omaha Convention and Visitors Bureau could only confirm a single fireworks show: the Independence Fireworks Spectacular at Werner Park on July 3.

When troopers with the Nebraska State Patrol arrived on the scene of a crash they found a semi fully engulfed with fireworks exploding inside the trailer.

"Lighting a firework at a warehouse where he was scheduled to pick up a trailer load … was not within the scope of Webber's job," a judge wrote on behalf of the court.

An Omaha man "mangled" his hand in a fireworks-related mishap this week, police say. His injury was one of several in the Omaha area, including burns and eye wounds, that occurred over the Fourth of July holiday.

'It takes less than a second': Man who lost hand in Omaha fireworks accident urges caution

Jared Spencer's right hand was blown off five years ago in a fireworks accident at a holiday party in northwest Omaha.

A Wyoming fire department is investigating after an explosion at its building Wednesday.

Where there's smoke from fireworks, there could be breathing problems

The Douglas County Health Department cautions that the risk of health concerns could be heightened over the Fourth of July weekend.

Omaha hydrant parties are back for the summer. Here's a look at the schedule

Kids can keep cool at three different locations every Monday, Wednesday and Friday when the Omaha Parks and Recreation Department unleashes a spray of splash-worthy water.

Dog bites are up; parents advised to supervise children, gives pets a little 'me time'

Children’s Hospital and Medical Center saw a 35% increase in dog bite injuries in May compared to last year, according to a press release from the hospital.

The victim is being treated for life-threatening injuries, the Nebraska State Patrol said.

Patrol officers will be out looking for illegal celebratory gunfire and fireworks activity and will arrest anyone caught discharging a firearm in public, Omaha police said.

Injuries, hot dogs and blowing stuff up: Fast facts about fireworks and the Fourth of July

To celebrate this Independence Day, we pulled together the numbers. On hot dogs. On fireworks. On everything.

The 19-year-old man lost control of a 2003 Chevrolet Trailblazer around 1:30 a.m. Saturday while southbound on North 30th Street. The vehicle slid sideways into a wooden pole.

Around 10:20 p.m. Friday, a 34-year-old man attempted to discharge a mortar-style firework while holding it near his chest, which injured his chest, arms and hands.

Hundreds of Omahans came out to this year's Field Club Fourth of July parade, only this time the floats were stationary and parade patrons walked and drove around the historic neighborhood.

Burns and eye injuries from fireworks were common, Omaha hospital officials said. One man severely injured his hand when he re-lit what he thought was a dud firework.

Fireworks use is like owning a car: Those who use them have an obligation to be responsible and to show proper respect to others.

Omaha City Councilman Ben Gray said his resolution will send a message to local and state leaders and residents of the state: “If you want to end racism, this is one of the ways to do it.”