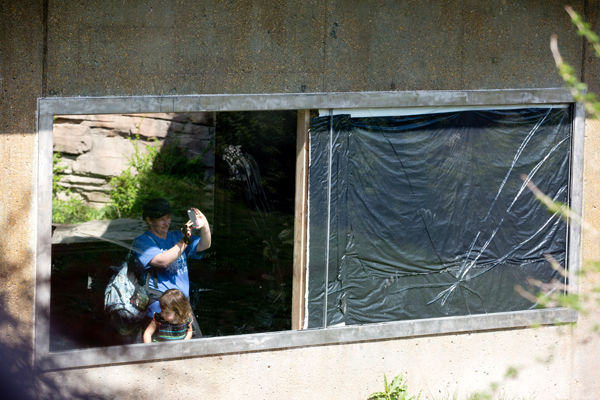 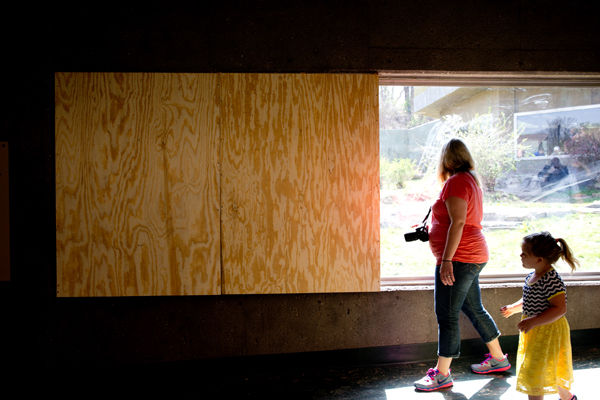 A board covers cracked glass at zoo's gorilla exhibit. 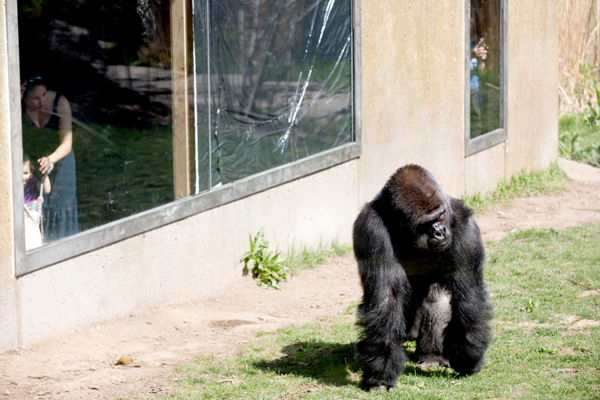 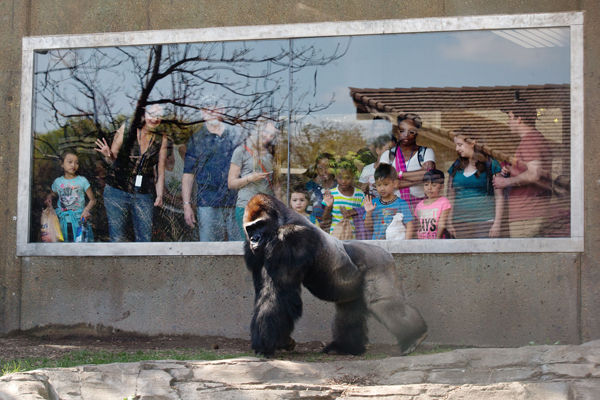 A gorilla went bananas on Thursday, cracking a glass pane in his enclosure at the zoo in front of a camera-wielding family.

Since then, more than 3 million people have watched the Cave family video of the 20-year-old silverback, a 375-pound male named Kijito, charge at the glass at the Henry Doorly Zoo & Aquarium.

Zoo officials said that the strength of the glass at the Hubbard Gorilla Valley meant that no one was ever in danger. But the incident was enough to scare the Caves — and those who watched their video.

Mechanic Kevin Cave, 35, was at the zoo Thursday morning with his wife, two daughters and other family members when he noticed the gorilla acting strange. He said a zookeeper told him that Kijito had already been in a fight and was trying to assert his dominance over other males.

“He was just staring at me. I said, ‘He’s going to do something crazy.’ ”

The two made eye contact. The gorilla started to charge the glass, but stopped short. Then, as Cave’s 7-year-old daughter mimicked a chest-beating motion, smiling at another gorilla, Kijito walked to the top of a hill and, well, went ape.

He threw his black-and-gray body at the glass, pounding his fists. The thick glass cracked, with fissures spread across half of the pane.

The Caves ran away.

“My 7-year-old daughter, she was actually crying,” Cave said in an interview. “I think she was more scared because we were all running.”

Cave uploaded the 12-second clip to YouTube and shared it on Reddit. By Friday, it had gone viral.

At the zoo, plywood covers the cracked pane of glass from the spectator side. Dan Cassidy, general curator at the zoo, said the covering will be up for a couple of weeks until new custom glass is installed. The zoo already has ordered the glass from a local company, and Cassidy said the cost is about the price of a used car.

Glass in the zoo’s enclosures can crack for a variety of reasons, Cassidy said. Occasionally, panes will break as the building settles or because of stress over years. This time, Kijito delivered the final blow.

Cassidy said it’s unlikely that Kijito was trying to attack anyone. Gorillas pound on the glass almost every day.

“Sometimes they like to make a lot of noise and show how tough they are.”

The window has three panes of glass, each a half-inch thick, and Kijito’s blow cracked only one of them. The zoo did not close the exhibit, nor did it punish the gorilla.

Craig Stanford, a primatologist and co-director of the Jane Goodall Research Center at the University of Southern California, didn’t notice anything unusual about Kijito’s behavior when he watched the clip.

“The only unique aspect was that this time the glass broke,” he said in an email. “It could honestly be anything from anger to play — behavior from anxiety to pure pleasure.”

Gorillas have broken glass at the zoo before.

Omahan Lizz Jamieson, 28, contacted the newspaper to say that she saw a silverback named Tambo charge the glass at an indoor gorilla display in March 2011, also cracking the pane.

“I thought I could feel (the crack) all the way through,” she said of putting her hand up to the glass. “... I remember thinking, if he hits this again, it’s going to break.”

Cassidy said an animal has never broken through the glass and escaped.

“There have been cases where they hit it just right and it does break. But, again, we’ve never had an escape here. There is no reason to think that it is not safe. I wouldn’t be standing here if it wasn’t.”

After the incident Thursday, the Caves cooled down and then moved on to the petting zoo. Cave said he never felt as though his family’s safety was at risk.

When he got home, Cave posted the video first to Facebook, then YouTube and Reddit. When he went to sleep about 1 a.m. Friday, it had about 50,000 views. By Friday evening, the video had surpassed 3.2 million views.

In a comment on Reddit, Cave shared a snippet of what the family was talking about before Kijito charged.

“Shortly before this, we were telling the kids they (the gorillas) could not break (the glass). They will never believe us again.”

Before viral videos, Casey the gorilla knocked out visitors (once, literally) at Omaha zoo

The gorilla that broke a window at the Henry Doorly Zoo & Aquarium last week isn't the first one to gain notoriety in Omaha.

Remember that one time a gorilla at the zoo cracked glass and the Internet went wild? Now you can see the full-length video.

The Henry Doorly Zoo and Aquarium exhibit never closed after the 375-pound Kijito, a western lowland gorilla, charged and cracked one layer of the glass.

A video showing two gorillas duking it out at the Henry Doorly Zoo & Aquarium is gaining some attention online.

The new video, reportedly shot last week in Omaha, shows a man posing for a selfie as the silverback charges forward, pushes off a rock and catapults himself toward the glass in impeccable photo-bomb fashion. According to those reports, that gorilla is Kijito, the same gorilla who broke the glass last April.

A board covers cracked glass at zoo's gorilla exhibit.