Other plaintiffs in the suit are the Nebraska Department of Health and Human Services and Director of Public Health Dr. Gary Anthone. The suit says Huse’s authority to issue a mask mandate under Omaha’s municipal code “conflicts with applicable state law.” 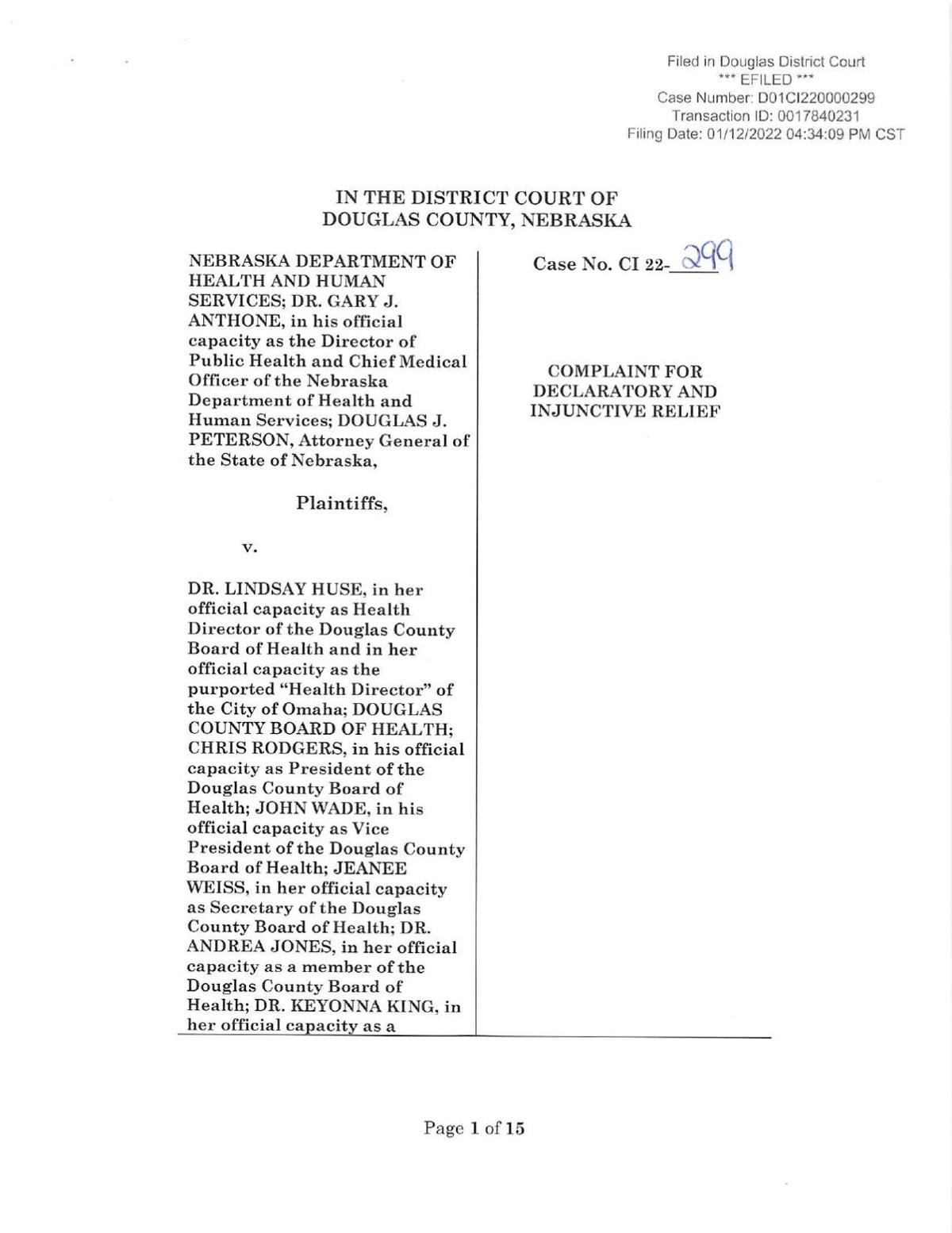 Douglas County District Court Judge Shelly Stratman has scheduled a hearing for 10 a.m. Monday, Jan. 24. It initially was scheduled for this coming Tuesday.

The mandate will remain in effect until the judge rules otherwise or until Huse deems it no longer necessary.

Huse has said that as she considered issuing a temporary mandate, she conferred with the county attorney who advises the health department and the city attorney, both of whom told her she was on solid legal ground.

Douglas County Attorney Don Kleine said the city’s Law Department will take the lead in defending the order because Huse issued the mandate in her role as the city’s health director.

Huse’s order, which she announced Tuesday, took effect at 12:01 a.m. Wednesday for schools and other public indoor spaces within the city limits of Omaha. There are several exceptions where the mandate does not apply.

Peterson is seeking a temporary and permanent injunction declaring the mandate “void and unlawful” and that Huse did not have “jurisdiction or authority” to issue it.

Gov. Pete Ricketts, who said Tuesday that he would ask Peterson to consider legal action, said in a statement that Huse’s action is an “abuse of power” that “undermines trust in our nation’s pandemic response.”

In the lawsuit, Peterson said Huse used language in her order that mirrored a previous mandate she unsuccessfully tried to impose in August 2021 and the mandate that the Omaha City Council adopted in August 2020.

One section of Omaha’s municipal code says the Douglas County health director “shall have the authority to adopt such rules and regulations, restrictions or measures as he shall deem necessary to protect the public health of the city.”

The lawsuit says that the state is “suffering irreparable harm” because Huse’s order circumvents Anthone’s right to approve or disapprove measures issued by county health departments.

“That harm includes the state’s interest in ensuring that a local health official cannot unilaterally and without limitation impose infectious-disease control measures,” the suit says. “The public interest weighs in favor of stopping government officials from acting unlawfully even when they are pursuing public health goals.”

Peterson argues that there are parts of the city code written when the City Council passed the mask mandate in August 2020 that involve details on masking requirements, but because that mandate expired on May 25 after the council did not extend it, “Huse cannot invoke the general ordinances to resurrect a mask mandate.”

The lawsuit also argues that Huse did not obtain approval from the state health department for the mandate, in her capacity as a county health director, as required by state law. However, Huse has said that Omaha city code enables her to act as Omaha’s health director, which is why the mandate is in effect only within Omaha city limits and not all of Douglas County. Peterson argues that Huse’s actions conflict with and are preempted by state law regardless.

Q&A on Omaha's mask mandate: Here's what you need to know

The mask mandate set to go into effect in Omaha at 12:01 a.m. Wednesday applies to indoor settings, with some exceptions.

With COVID cases rising and limited hospital capacity, Douglas County Health Director Lindsay Huse said Tuesday that she will issue an indoor mask mandate for the city of Omaha effective at midnight.

Activating the plan provides the health system with additional flexibility to redeploy staff, limit non-urgent services and modify how resources are distributed.

The announcement came two days after a mask mandate went into effect in Omaha.

Spokespeople for First National Bank of Omaha and Conagra said they are no longer proceeding with the steps specified in the OSHA rule.

At-home COVID tests hard to find in Omaha, 'but help is on the way'

At-home COVID-19 tests remained scarce in Omaha on Saturday — the first day that insurers were required to cover them. But they should be available through the federal government starting Wednesday.