Ask Tony Vargas about why he got into politics and the state senator talks about his father.

Growing up in Peru, the elder Vargas didn’t think elected officials worked for the people.

But when Tony Vargas ran for office, his father went from disliking politics to helping knock on doors as his son campaigned for a seat in the Nebraska Legislature.

“He would talk to families, he would listen to people and he would come back after eight hours of knocking on doors and be like, ‘I get it. What you’re doing, I get it,’” said Tony Vargas. “’People believe in you and expect more from you. That’s how this is supposed to work.’”

After almost a decade in elected office in Nebraska, Tony Vargas, 37, is back on the campaign trail — this time for a seat in Congress.

Vargas is running to represent the 2nd Congressional District, which covers all of Douglas County, Saunders County and western Sarpy County. The district is currently represented by Rep. Don Bacon, a Republican who is seeking reelection.

Vargas, a Democrat, will face fellow Democrat Alisha Shelton in the May 10 primary election. The winner will move on to the general election in November.

When asked to compare himself with Shelton, Vargas said he prefers to talk about himself and pointed voters to his record in the Legislature.

According to the last available fundraising reports, Vargas entered the year with $440,108 in the bank compared to $89,184 for Shelton.

Either Democrat will have a tough race against Bacon, who is expected to win the Republican primary and started 2022 with $977,664 in the bank.

“People hear about him,” she said. “One of the issues that challengers have is just that people haven’t heard of them and they need the money to get some name recognition but they have trouble raising the money because they’re not the incumbent.”

Vargas was appointed to the Omaha Public Schools board in 2013 and then was elected to the Legislature to represent District 7, which covers southeast and downtown Omaha, in 2016.

Vargas was a nonprofit executive but stepped away to focus on running for Congress and being a state senator. Vargas and his wife, Lauren, have two children: Ava, 3, and Luca, 1.

A native New Yorker, Vargas grew up in Queens and Long Island more than 1,200 miles away from the district he now represents in the Legislature.

His parents, Antonio and Lidia Vargas, both immigrants from Peru, worked two or more jobs most of their lives in order to give their three boys opportunities and a different life. Tony Vargas said that’s why he has not only stayed in politics but also remains idealistic about what’s possible.

“They had grit and perseverance just emanating through every single bone of their body, and it was a big part of my life,” Vargas said of his parents. “The word ‘can’t’ never came up. It was ‘How?’ ‘What are we going to do next? How are we going to do it?’”

“There’s not a minute that goes by that I don’t think about him,” Vargas said.

And he introduced bills in 2020 and 2021 intended to establish COVID-19 protections for workers in meatpacking plants, which were a hot spot for infections early in the pandemic. He said he fought hard for the bills, but they did not pass.

Vargas’ district includes several packing plants. He said at the time that the back-to-back rejections of safeguards for such essential workers sent a bad message to the “Black and brown” workers who comprise most of the packing plant workforce.

“When we take care of our workers — when they’re healthy and when families are healthy — productivity, the companies, the communities are better,” Vargas said. “And when we don’t, and we see heartache and we see people hospitalized or dying or not being able to go to work, there is a real loss of a family, and a loss that I saw firsthand that I never wanted anybody else to see.”

“I realize we need somebody that stays connected to the pain people are feeling right now,” Vargas said of his decision to run for Congress.

Vargas said his parents taught him the importance of giving back to others and using your education for good. After initially planning to enter a public health doctorate program, Vargas instead became a middle school science teacher in Brooklyn for two years with the Teach for America national program.

Teach for America trains college graduates to be teachers and places them in schools, in both rural and urban areas.

Becoming a teacher wasn’t what Vargas had planned for his life, but he now calls it one of the best decisions.

“My students honestly taught me everything I ever needed to know about culture, and about when we set really amazing goals, when we think idealistically about what’s possible, we can do really amazing things,” Vargas said.

Vargas’ first introduction to Nebraska came through Lauren, whose family is from the state. Vargas said getting to know her family meant not only visiting Omaha but going on a bit of a state tour visiting cities like Columbus, Kearney and Lincoln for family reunions.

Vargas moved to Omaha in 2012 as Lauren pursued a law degree at Creighton University.

“This is a special place,” Vargas said of Omaha. “There’s one degree of separation. And people want to take care of each other and help each other.”

After moving to Omaha, Vargas saw an online post from the Greater Omaha Chamber Young Professionals in 2013 about an open spot on the Omaha Public Schools board and decided to apply.

Vargas said he wanted to invest in his new community and find ways to be active. He was appointed and served as a member of the school board until he was elected to the Legislature.

“I learned that: One, it’s my job to make sure that people’s voices are elevated from my community; and two, we can always do a better job of representing the public,” Vargas said of his time on the school board.

In February 2014, Vargas testified in support of Legislative Bill 972, which would have authorized the creation of five charter schools in Omaha. The bill did not get out of committee.

At the time, Vargas said charter schools could be an option for parents, especially those faced with the prospect of sending their kids to low-performing neighborhood schools.

Vargas’ stance on charter schools became an issue in his 2016 run for the Legislature. Vargas said then that his views on the issue had evolved and he didn’t support any type of charter schools that would undermine public education.

Now, Vargas says that after talking to people over the years about the issue, his focus is on figuring out a way to invest more in the current education system and expect that every student, regardless of what school they attend, is prepared for college or the job market.

“How do we innovate and expect more from the system and invest in the people doing the work every single day?” Vargas said.

During his time in the Legislature, Vargas said he has passed more than 55 bills. He has also been a member of the budget-crafting Appropriations Committee.

Vargas is one of the youngest members of the committee and the only person of color currently on the committee.

Growing up, Vargas said he received free and reduced lunch at school and used Pell Grants to attend college. He said Congress needs people who have experience in how those programs and services can affect and improve lives.

The state senator said he uses those life experiences as a member of the Appropriations Committee when talking about similar programs to help the highest-need communities in Nebraska.

“I think we are capable of leading with compassion and civility, but I also think we fight for the things that matter,” Vargas said. “I think we can be principled in how we stand up for things. Those are not mutually exclusive.”

Top priority: Washington isn't working for Nebraskans. We're feeling it at the gas pump and the grocery store, yet career politicians in Congress are more focused on partisan infighting than solutions. Folks here deserve affordable access to health care, jobs with living wages that support a family, and a world-class education no matter where they live. And we must get rising costs under control so Nebraskans have the opportunity to get ahead. To do it, we need more leaders in Congress who will stand up for our values with integrity and civility and put results above politics.

Nebraska has more than $1 billion in federal COVID recovery money. Under the Legislature's latest plan, about 25% would be spent to boost Nort…

With the primary election about nine weeks away, incumbent Republican Don Bacon has a big financial advantage over his rivals in the race to r… 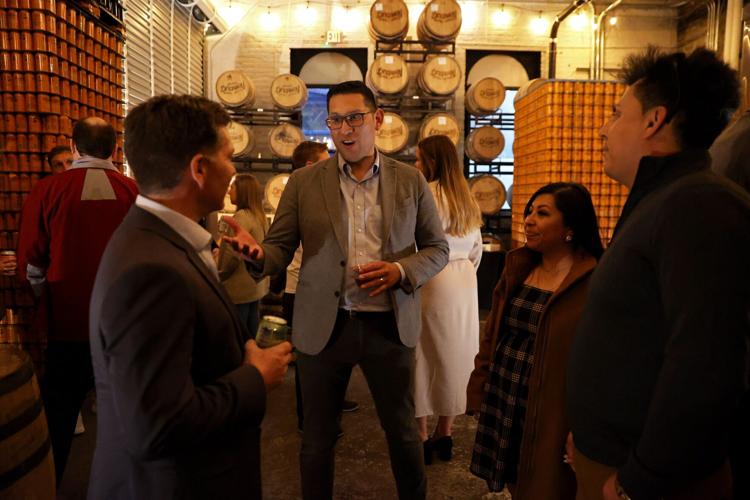 State Sen. Tony Vargas (second from left) speaks to Zac Triemert (from left), Itzel Lopez, and Jaime Arias during a campaign event at Brickway Brewery in Omaha in April. 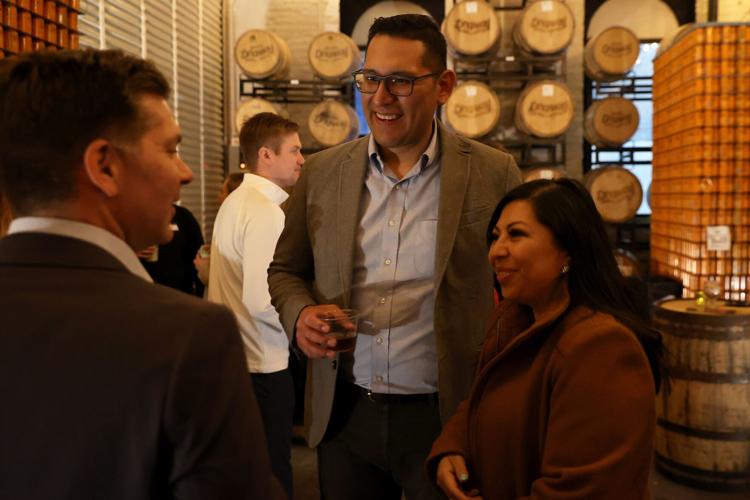 Vargas, center, speaks with Zac Triemert, left, and Itzel Lopez, right, during a campaign event at Brickway Brewery in Omaha. “This is a special place,” Vargas said of Omaha. “There’s one degree of separation. And people want to take care of each other and help each other.” 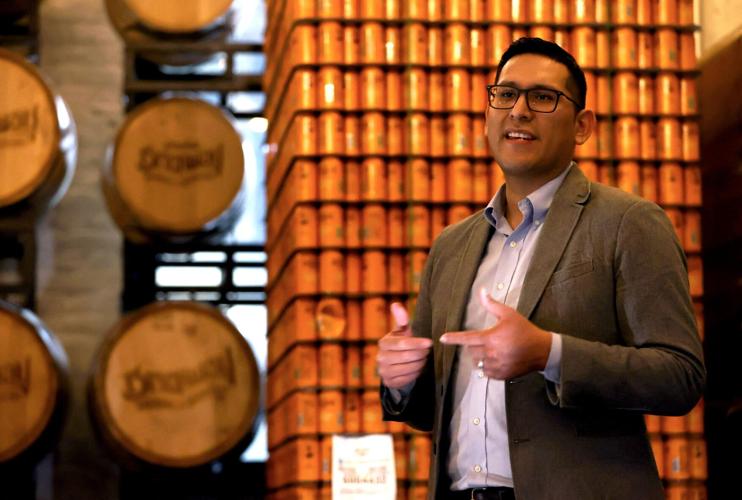 “I think we are capable of leading with compassion and civility, but I also think we fight for the things that matter,” said State Sen. Tony Vargas, who is running to represent Nebraska’s 2nd Congressional District.