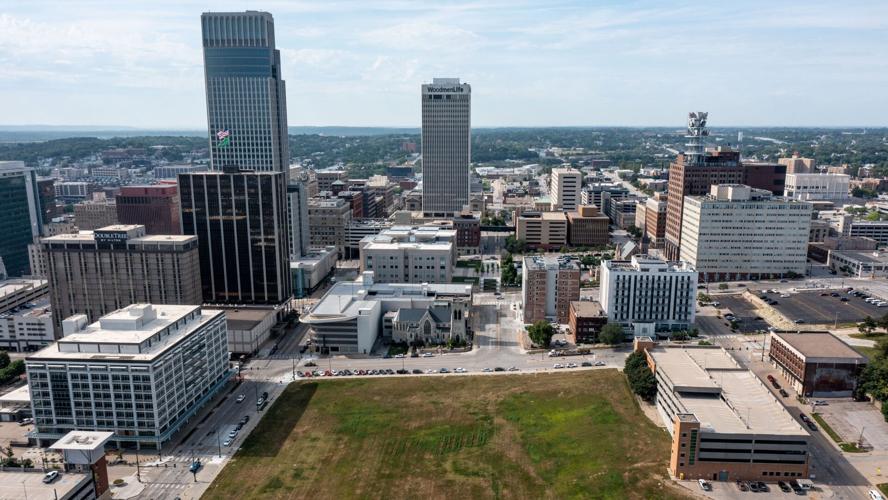 The site of the former Civic Auditorium, 1804 Capitol Ave., is pictured Tuesday. The Civic Corner development group plans to build 268 market-rate apartment units, about 120 affordable units and about 25 townhouses at the site. 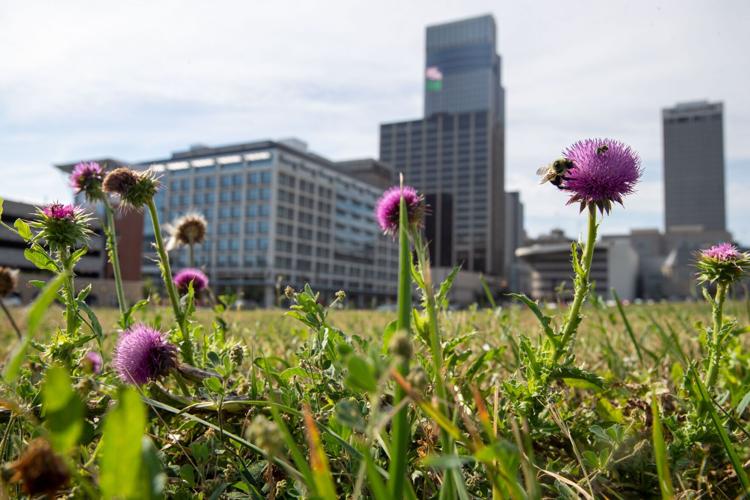 Bees land on thistles at the site of the former Civic Auditorium on Tuesday. The auditorium was demolished in 2016-17.

Development proposals for the site of Omaha's former Civic Auditorium have for years come and gone, but city officials on Tuesday aimed to further solidify a plan that would bring hundreds of housing units into the city's urban core.

Under a proposal considered by the City Council, about 7 acres of land between 17th and 19th Streets along Capitol Avenue would be sold to a development group for about $1.5 million.

Omaha Mayor Jean Stothert more than a year ago announced that the city had signed an agreement to sell the property to a development group called Civic Corner. It's being led by White Lotus Group, an Omaha company with a history of developing large-scale projects.

While redevelopment plans have not yet been finalized, housing is a key focus for the property. Civic Corner plans to build a mix of 268 market-rate apartment units, about 120 affordable units, and about 25 townhouses that will be for sale.

A remaining acre of land would be reserved for future civic or commercial use.

Jay Kline, a representative of White Lotus, told council members Tuesday that the development group is now considering an expansion to its original plan.

"Due to the more recent announcements regarding the significant reinvestment in the urban core, mostly the streetcar, we are looking at potentially increasing the scale of our plans to make it even larger," Kline said.

The plan would breathe life into a part of Omaha's downtown that has sat empty for about five years.

Built in 1954, the Civic Auditorium for generations was the scene of political rallies, graduation ceremonies, concerts and sporting events. But it outgrew its useful life and was demolished in 2016-17 at a cost of $3.1 million.

The agreement between the developer and the city gives a June 30, 2023, deadline for Civic Corner to obtain building permits for at least 50% of the square footage of the proposed development, and to submit design plans for the site. If it fails to do so, the agreement says the city will recoup the land at the same price it sells for.

The group has been in discussion with multiple potential development partners, both locally and nationally.

"Our vision is a mixed-income, multi-family development that aims to create a friendly and inclusive lifestyle environment catered to a younger urban population that wants to work and live in the city," Kline said.

It's a vision the city supports.

City officials have for years attempted to bring jobs into the urban core, "and it hasn't worked," said Troy Anderson, deputy chief of staff for economic development and development services.

As the city courted national employers for the downtown area, a common theme began to emerge.

"We were told 'You have a lot of really exciting things going on downtown, but you don't have a workforce downtown that we can employ,'" Anderson said. "'Let's get people and talent downtown, and the jobs will come' is what we've been told by employers."

The city had signed a memorandum of understanding with White Lotus CEO Arun Agarwal to sell the property at no more than $5 a square foot. That amounts to about $1.5 million.

To help finance the project, the developer will seek low-income housing tax credits from the Nebraska Investment Finance Authority. The dollar-for-dollar credits are meant to encourage private developers to invest in low-income rental housing by offsetting their federal income tax liability.

The site also is expected to be eligible for tax-increment financing, a tool used to help finance redevelopment.

The agreement between the city and Civic Corner says tenants of the mixed-income housing units will have access to 150 parking spaces at reduced rates in a city-owned parking garage at 19th Street and Capitol Avenue.

The City Council's approval next week would finalize the sale.

Developer White Lotus Group is hoping to add 20 to 25 town houses into the layout that previously included roughly 400 rental units.

Omaha Mayor Jean Stothert announced Tuesday that the city has signed a tentative agreement with White Lotus CEO Arun Agarwal in which the city will sell the property to the Civic Corner group.

Staffer in Mayor's Office leaving Omaha for position in Kansas

Troy Anderson, who currently serves as deputy chief of staff for economic development and development services is resigning on Aug. 5 to become the assistant city manager in Wichita, Kansas.

All-America City Award not in the cards for the Omaha area, but South High grad is honored

The Omaha metro area did not win the National Civic League’s All-America City Award this week. But a South High School grad was honored by the national organization.

The National League of Cities will be paid $131,725 to provide diversity, equity and inclusion consulting; strategic planning and the development of training for all City of Omaha employees.

The site of the former Civic Auditorium, 1804 Capitol Ave., is pictured Tuesday. The Civic Corner development group plans to build 268 market-rate apartment units, about 120 affordable units and about 25 townhouses at the site.

Bees land on thistles at the site of the former Civic Auditorium on Tuesday. The auditorium was demolished in 2016-17.