A proposal heading before the Omaha City Council on Tuesday would strip decision-making powers from the city health director in the event of an epidemic.

The ordinance states the special epidemic director would assume the powers previously held by the city’s health director during an epidemic. However, any order from the new epidemic director could be rejected by the mayor. The City Council also would have the ability to weigh in on the order.

Omaha Mayor Jean Stothert, who requested the ordinance along with Councilman Vinny Palermo, told The World-Herald that the measure is intended to provide accountability during future epidemics.

Nearly two months ago, Douglas County Health Director Lindsay Huse issued a mask mandate for Omaha amid a surge of COVID-19 infections. Huse issued the mandate under her authority as the city’s health director. She cited an “astronomical spike in cases” and already overburdened health care system as her justification for the mandate.

At the time, it appeared to have the backing of a majority of City Council members. Some health officials, including the chief of the University of Nebraska Medical Center’s infectious diseases division, also voiced support for the mandate.

But a trio of council members vocally opposed it, as did Gov. Pete Ricketts and Stothert, though she conceded Huse had the authority to issue the mandate. The mayor said neither she nor the council could void the mandate, which Huse eventually lifted in February.

“It was something that I opposed and the council had no say in it,” Stothert said. “Those making the decisions for the people of Omaha should be those elected to serve them.”

Huse could not be reached for comment Saturday. A spokesperson for the Douglas County Health Department declined to comment on the proposal.

Under the ordinance, the newly created special epidemic health director position would be filled by the physician medical director at the Omaha Fire Department.

Stothert said they opted to designate someone already on the city’s payroll so the city wouldn’t have to scramble to hire a new person during an epidemic.

The Douglas County health director would still serve as the city’s health director. But during an epidemic, their role would be limited to activating the new special epidemic director, who would then make recommendations regarding precautions and regulations.

The mayor would have the power to approve or reject those recommendations. If she decided to take no action, the order would go into effect after 24 hours. The proposed actions would also be placed on the agenda at the City Council’s next meeting, during which the council could uphold or reverse the mayor’s decision.

“We learned a lot. We learned how the citizens feel about mandates and forcing them to do things,” Stothert said Saturday. “We hope that we don’t have another one of these, but if we do we have to be prepared.”

Tuesday’s meeting would be the first time the proposed ordinance comes before the council. A public hearing is scheduled for March 29.

The council’s meeting is scheduled to start at 2 p.m. Tuesday in the city’s legislative chambers, 1819 Farnam St. A livestream can be accessed via www.cityofomaha.org. 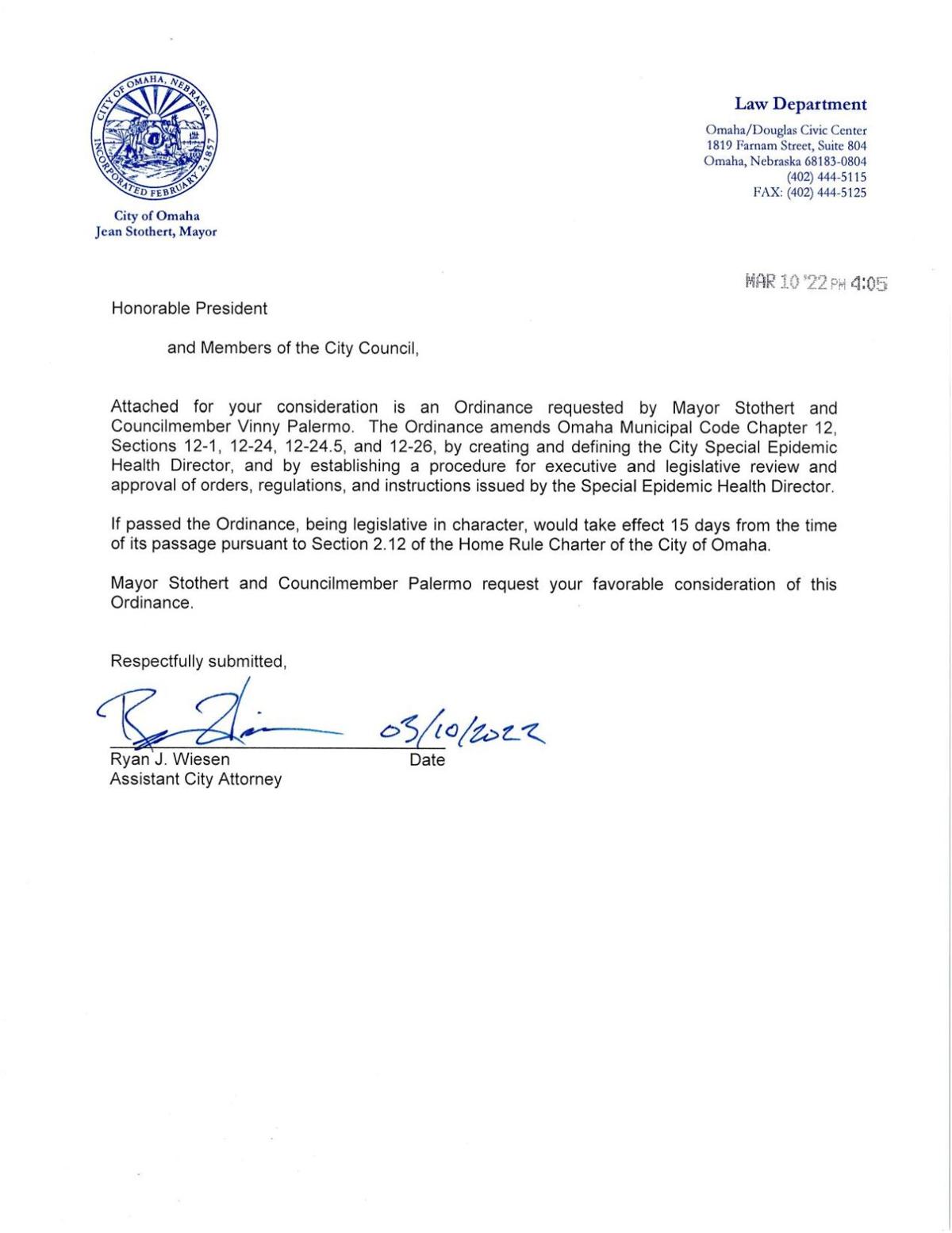 A draft financial analysis obtained by The World-Herald indicates the city is relying on a surge of new development around the proposed streetcar to pay for its construction.

With the primary election about nine weeks away, incumbent Republican Don Bacon has a big financial advantage over his rivals in the race to represent the Omaha-based 2nd District.

In an effort to curb a rise in catalytic converter thefts, Omaha City Council is considering additional requirements for buying and selling the automotive device.

A proposed ordinance would give the Douglas County health director the power to certify the presence of an epidemic. An epidemic health director would be responsible for creating a plan to manage it.

The Douglas County health board opposes a plan before the Omaha City Council that would strip decision-making powers from the city health director in an epidemic.