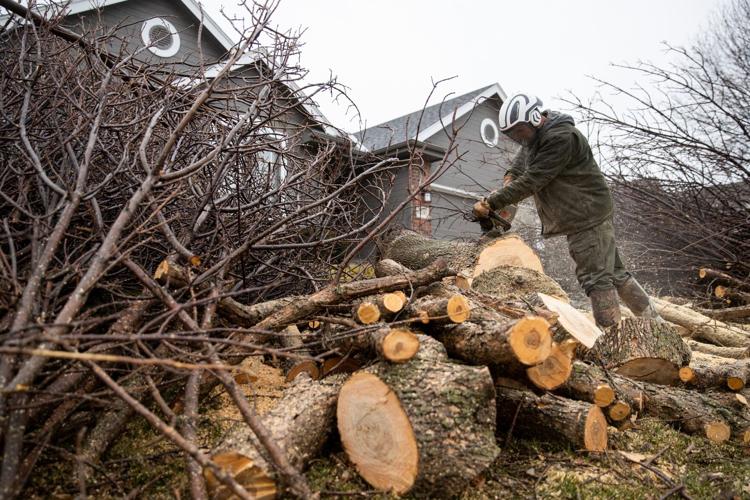 Large trees and limbs fell across the metro area in July as a windstorm brought the strongest winds ever recorded in Omaha. This 30-foot green fell near 162nd Avenue south of Harrison Street. 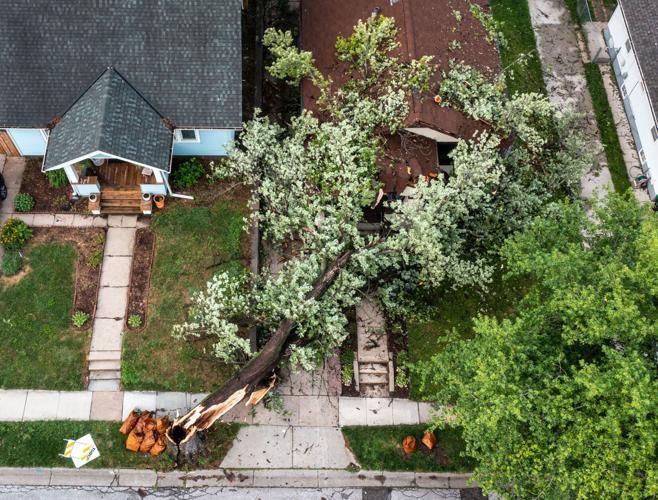 A July windstorm left 188,000 customers without power in southeast Nebraska. Cities are on the front lines of damaging climate change, directly feeling the effects of flooding, deadly heat waves, storms and power outages.

From flash flooding to rolling blackouts, from potholes to smoky skies, Omahans have had a bitter taste this past year of the effects that extreme weather has on their lives.

And now that other entities in the metro area, notably the Omaha Public Power District, are ramping up efforts to address climate change, the City of Omaha will capitalize on that work and lead a metro area climate action plan.

When the plan is in place, Omaha will join several hundred other cities in the U.S. with strategies for confronting climate change.

Lincoln, the Kansas City metropolitan area and the Twin Cities already have plans. Des Moines is developing one. The Nebraska Legislature has rejected calls for a statewide plan.

Asked “why now?” Mayor Jean Stothert said in an email to The World-Herald that the time is right to take advantage of local efforts.

“Omaha has been implementing sustainability measures for some time now without the need for a formal plan,” she wrote. “The current timeline gives us the opportunity to maximize the results of more coordination for climate-related practices.”

Midlands Voices: Demand for electricity is on dramatic upswing; we need reliable power

Omaha’s decision to draw up a plan elicited praise and frustration from those who have been working for years on the issue.

“Omaha and the surrounding area are late to the solutions game,” said David Corbin, chairman of the Missouri Valley Sierra Club’s energy committee. Corbin disagreed with Stothert’s assessment that the metro area did not need a plan until now.

“I hope the city doesn’t approach other public responsibilities with the same laissez faire attitude,” he said. “Not having a plan is a type of inaction.”

Winter heating bills expected to spike in Nebraska; weather will determine by how much

Cities are on the front lines of damaging climate change, directly feeling the effects of flooding, deadly heat waves, storms and power outages. They are also a primary source of emissions. Cities occupy 2% of land globally but account for up to 70% of all energy-related carbon dioxide emissions, according to the World Resources Institute.

Climate plans typically involve identifying where a community is most vulnerable to severe weather, its contribution to global warming, what needs to be done and measurable steps to do it.

“A huge part of climate action has to do with national policies ... but there is much to be done on the strictly local level,” she said.

Mendenhall said cities can reduce their emissions by enacting building codes that lead to greater energy efficiency and through planning, zoning and transportation strategies that lessen the need to drive.

Some of the impetus for the plan comes from Omaha’s desire to remain competitive in drawing new employers and talented workers, said Kevin Andersen, Stothert’s deputy chief of staff for economic development.

“From an economic development perspective, more and more, it’s getting to be a prerequisite,” he said. “We’re hearing that these kinds of approaches are very important to both businesses and the workforce.”

Global warming is accelerating, and additional, future heating is baked into the atmosphere, scientists say. Likely impacts for the Omaha metro area include more illness and increasingly extreme weather, from flooding to drought. Even potholes could get worse, given that the state’s winters are becoming wetter.

Lacking aggressive reductions in global emissions, within 80 years, summers in eastern Nebraska could become similar to those in southern Texas today, according to a study by the University of Nebraska-Lincoln.

Upcoming winter could be a stormy one in Nebraska, but it depends

Metro Smart Cities, which has been active in Omaha-area transportation projects, has been tasked with issuing a request for proposals early next year and selecting a consultant by mid-2022, Andersen said. Once a consultant is selected, developing the plan could take a year or more, based on the experiences of other cities, he said.

Because the plan will grow out of Metro Smart Cities, it will encompass that group’s members, including Council Bluffs, Bellevue, the Omaha Public Power District, the Metropolitan Utilities District, the Greater Omaha Chamber of Commerce and the Metropolitan Area Planning Agency. Communities that are not already part of Metro Smart Cities are welcome to participate, Andersen said.

Funding to draft the plan will likely come from a mix of public and private dollars.

Stothert said the city’s approach — bringing in utilities, businesses and other communities — will produce a better plan. Public input will be part of the planning process.

“A regional, multi-jurisdictional climate action plan will identify key areas where we can partner with other public and private entities to further each of our respective goals for climate sustainability and resilience,” she said in her email.

Other organizations already moving on climate change include Creighton University and OPPD. As part of a new sustainability plan, Creighton is undertaking a significant revision to the climate plan it developed in 2013. Creighton’s new plan is due out in April and will chart a path toward climate neutrality by 2050.

OPPD has spent the last two years developing a decarbonization plan targeted at 2050. It will be made public next month.

OPPD board member Eric Williams said actions by the utility alone won’t be enough, which is why the city’s decision to pursue a climate plan is important.

“There are actions OPPD can’t take directly,” he said. “We will need to partner with the city as well as people and businesses.

“No individual organization will be able to accomplish this on its own,” he said.

Williams said the plan will need to commit to net zero emissions by 2050.

Net zero would mean a steep reduction, but not complete elimination, of emissions. To account for those emissions that can’t be eliminated, there would be a corresponding increase in greenhouse gas-neutralizing measures such as carbon sequestration.

“We all need to work together to make sure all of our plans are aligned around that central goal of reaching net zero carbon by 2050,” Williams said.

Studies show that cities can have the same difficulties nations do in tackling climate change: Their plans can be strong on aspiration but short on results.

A Brookings Institute study found that of the nation’s 100 largest cities, 45 had a serious climate pledge as of 2017. About two-thirds of cities with pledges are falling short of their targeted emissions cuts.

A review of the climate plans of Canada’s 63 largest cities found the plans to be focused on emission reductions without strong monitoring protocols, short on efforts to address climate impacts, and lacking in robust public input.

Week will start off warmer than average in Omaha, then turn cold enough to snow

The high for Monday is projected to be about 64, about 9 degrees higher than normal for this time of year. Each day will get a little colder, and starting late Thursday, light snow will be possible.

Windy weather will dominate rest of work week in Omaha

Strong winds are the forecast for the rest of the week with temperatures dropping off steeply Friday.

The first electric buses in the City of Omaha's fleet will hit the street in the opening months of 2022 just as the city begins work on a climate action plan.

Temperatures will be 'up and down' in Omaha area this week

There will be bit of warmup Tuesday and Wednesday, then a dramatic cooldown on Thanksgiving before temperatures rebound again over the weekend.

Omaha City Council voiced its support Tuesday for the development of a climate action plan and an affordable housing plan by the city.

The best chance for records to fall will come Thursday, when Omaha, Lincoln and Norfolk all have chances to break into the 70s.

Metro area residents will be paying more for water next year and now have a better idea of the likely impact of high natural gas prices on their heating bills.

Advocates say a new generation of nuclear power plants will be safer and simpler. But some environmental groups are urging caution about what they consider unproven technologies.

North Omahans will get cleaner air, renewable energy will play a bigger role and homeowners and businesses will get more help saving energy as part of plans under way at OPPD.

Nearly six months ago, Omaha officials announced their intent to develop a plan to address climate change. Despite ongoing efforts and commitments, a finalized plan is still more than a year away.

Large trees and limbs fell across the metro area in July as a windstorm brought the strongest winds ever recorded in Omaha. This 30-foot green fell near 162nd Avenue south of Harrison Street.

A July windstorm left 188,000 customers without power in southeast Nebraska. Cities are on the front lines of damaging climate change, directly feeling the effects of flooding, deadly heat waves, storms and power outages.