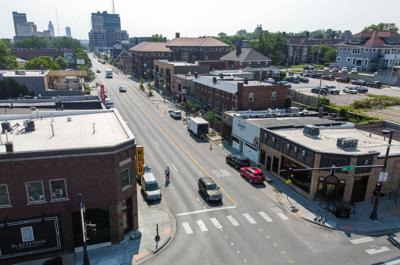 The Blackstone District has revealed plans for a streetscape makeover expected to boost pedestrian safety and commerce by widening sidewalks and narrowing driving lanes along the trendy midtown Omaha strip.

A burst of sparkle — in the form of light strands across a stretch of Farnam Street — also is part of the $4.4 million package.

The plan comes on the heels of a Blackstone apartment dweller getting struck and seriously injured by a hit-and-run driver in June as she crossed Farnam between 39th and 40th Streets.

Blackstone leaders say proposed changes have been in the making a few years, though, dating back to a merchant’s search for signature lighting for the area. They describe the streetscape proposal as the next major infrastructure upgrade since car flow through the district turned from one way to two way in 2014.

That earlier reversal of a half-century pattern opened access to the area and was pivotal, the Blackstone leaders said, in ushering more than $250 million of investment and $20 million in annual revenue to the revived Blackstone retail and residential corridor.

“Right now it’s functional, it’s just not usable for the volume of people wanting to come and enjoy the district,” said Jim Farho, president of Blackstone’s business improvement district. “Our goal is to make sure residents and the community-at-large can enjoy the district and know they’re in a safe place.”

What improvements would you like to see made to Blackstone?

Farho foresees economic development accelerating once the additional changes are in place.

Funds have yet to be raised, but leaders from three Blackstone groups supporting the plan are optimistic the district can be sporting its new look in 2023.

The focus of the redesign is Farnam Street, the spine of the business district that’s also been buoyed by growth of its bookends: the University of Nebraska Medical Center to the west; Mutual of Omaha’s Midtown Crossing and downtown to the east.

Lighting: Strands of lights would be strung across Farnam Street from 39th to 40th, creating that “postcard moment,” Farho said.

He said signature lighting not only should promote attention and business for the district and city overall, it should slow down traffic. Farho expects drivers will see the sparkle and get the message: “Oh, this is a place, it’s not just a street.”

Sidewalks: Pedestrian walkways would be widened to 6½ feet from 42nd Street to 36th Street. Current width ranges from 3 feet to 5 feet, depending on the spot. (An additional foot will remain along the sidewalk for infrastructure and utility poles.)

The extra space should enhance pedestrian safety, said Matt Oberst, manager of the business improvement district. He noted, for example, how lines of people often snake outside storefronts like Coneflower Creamery, posing a hazard if someone drifts off a crowded sidewalk and into the street.

Drive lanes: Each driving lane would shrink from 12 feet wide to 11 feet wide; parking lanes also would narrow a foot, to 8 feet. Cars tend to slow down along narrower roads, Oberst said.

Currently, the commercial corridor has three driving lanes: two westbound and one eastbound. The center lane would be converted to a turning lane, leaving eastbound and westbound traffic with one lane each.

Parking would not change as a result of the streetscape proposal, Blackstone leaders said, but a nine-story mixed-use structure planned for the corridor between 38th and 37th Streets is poised to add a few hundred parking spots to the area.

Farho said the district also is working with the city to add metered parking for handicapped visitors on the corridor’s west end.

They said the plan has received the green light from Mayor Jean Stothert’s administration. However, they said, it’s unknown whether or how much of the $4.4 million might come from city coffers.

It wasn’t as simple as anchoring lights to businesses, he said, as some older structures were ill-equipped. The current plan calls for poles to be installed as anchors for the lights. A specific style has yet to be determined.

Jay Lund of GreenSlate Development, which has been behind the bulk of Blackstone development projects, says safety enhancements can’t come soon enough.

He cited the Blackstone apartment-dweller who was hospitalized after the vehicle hit her in June. Also recently, Lund said, a man was clipped by a car during the evening as he moved from behind his Uber ride.

“These are just examples of the exposure this area has with narrow sidewalks and fast traffic,” Oberst said. “We’re trying to address that public safety exposure.”

And the district is only growing beyond what Lund said is more than 30 locally owned businesses that opened in the past decade.

A hole in the ground at 3863 Farnam, the former site of century-old apartments, signals a future two-story commercial building to be occupied by restaurants with outdoor patios on both Farnam and Harney.

The nine-story, $43.5 million building with apartments, retail and parking is scheduled to open in 2023.

The Cottonwood Hotel and its restaurants are up and running after a three-year, $75 million rehab project. Across the street is the relatively new Switch Beer and Food Hall.

To the east, at 36th and Farnam Streets, the Lund Co. is renovating the former Kiewit headquarters into an office building for multiple users.

Why is a vibrant downtown important for Omaha?

Hubs of commerce, housing, offices and entertainment are growing across the city. Given such thriving activity outside Omaha's urban core: Why is it so important to have a vibrant downtown anyway?

Developer Noddle Cos. has put forth a new plan that calls for fewer and more amenity-rich for-sale residences at the project site southeast of 38th Street and Dewey Avenue.

The district's plans for a $4.4 million streetscape revamp isn't dictated by the city government; it's a community-driven initiative.

Today, Omaha's 16th Street corridor is but a shadow of its heyday. Department stores of yesteryear have been replaced by stretches of parking garages and aging structures. Not all is bleak, though. 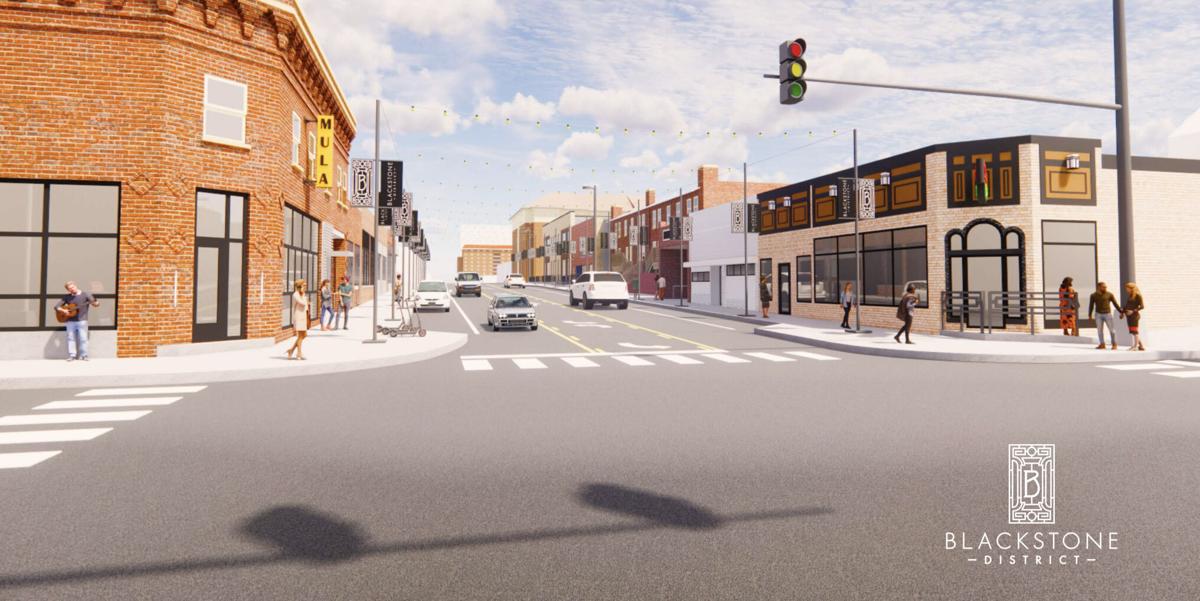 The Blackstone District has revealed plans for a streetscape makeover. Part of the plan includes strands of lights to be strung across Farnam Street from 39th to 40th Streets. 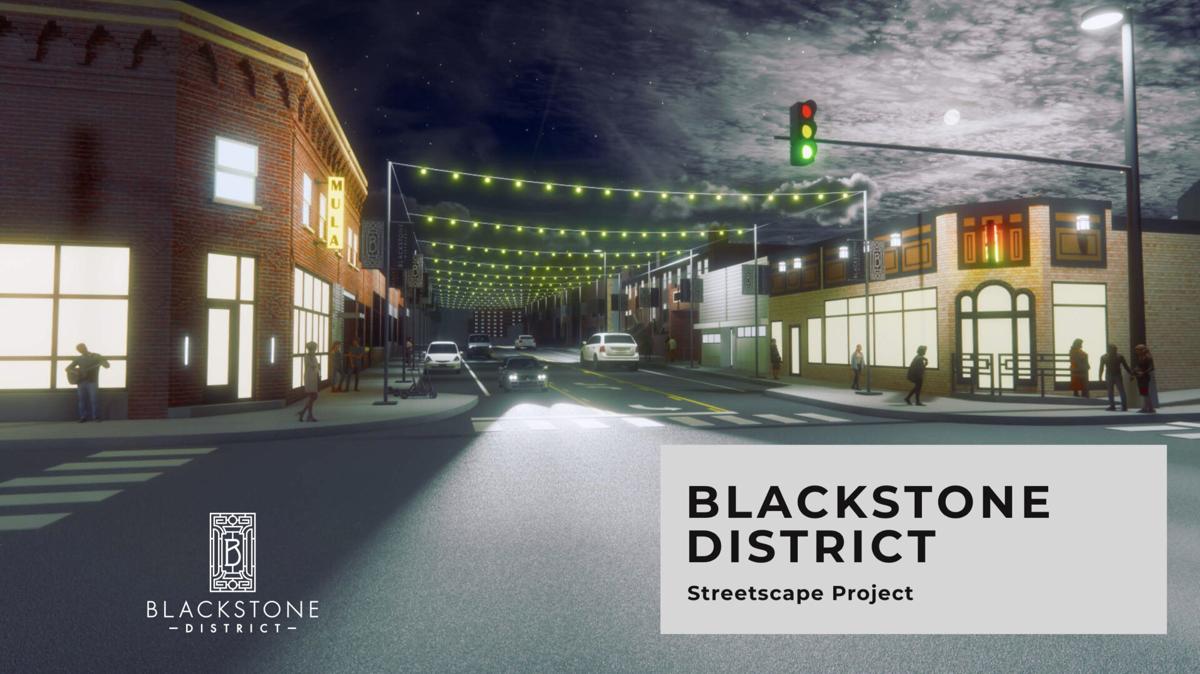 The Blackstone District has revealed plans for a streetscape makeover. Strands of lights would be strung across Farnam Street from 39th to 40th Streets, creating a “postcard moment.”

The Blackstone District has revealed plans for a streetscape makeover expected to boost pedestrian safety by widening sidewalks and narrowing driving lanes.

The Blackstone District has revealed plans for a streetscape makeover expected to boost pedestrian safety by widening sidewalks and narrowing driving lanes. 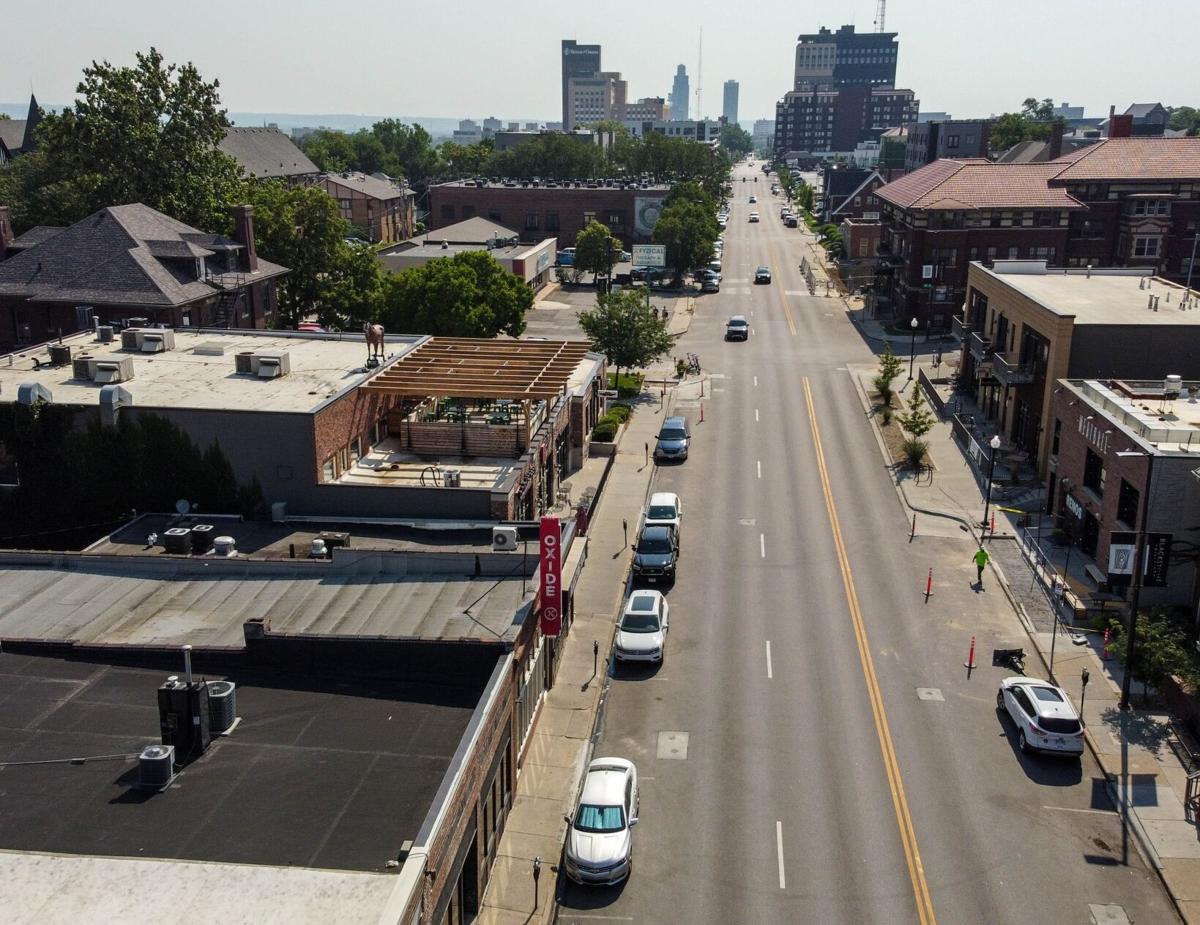 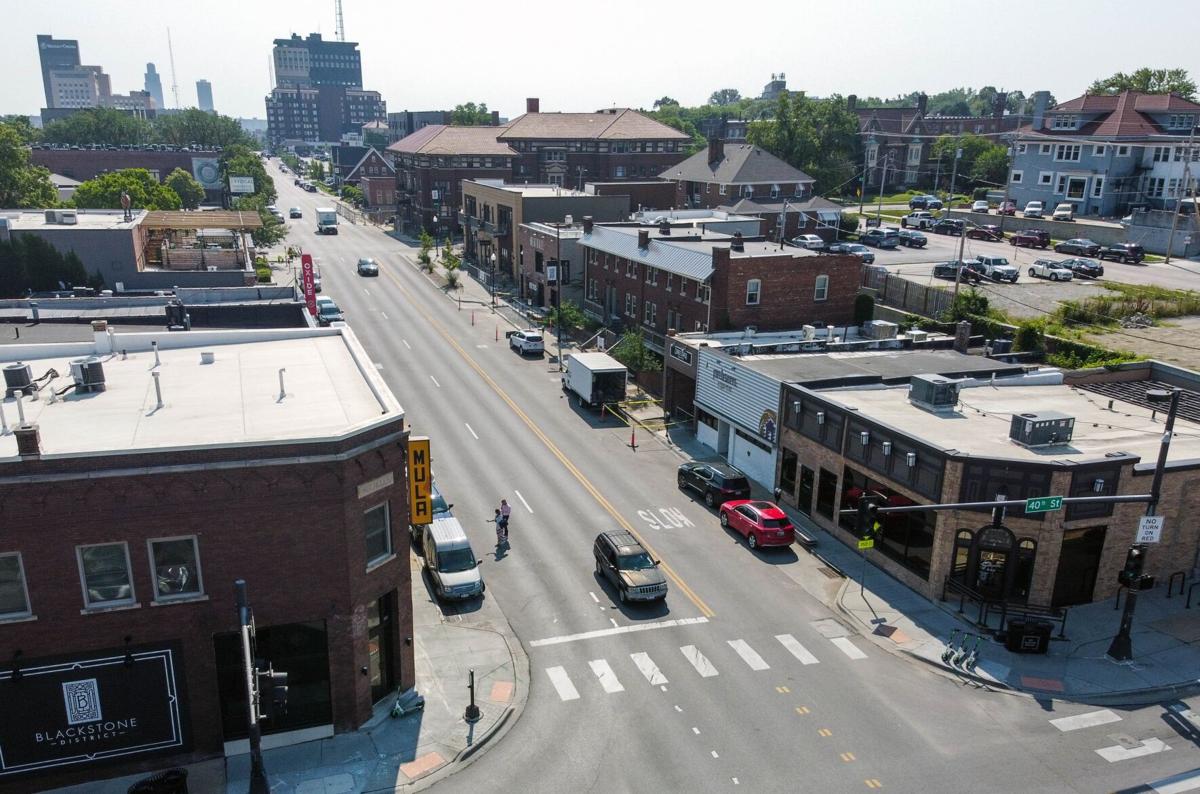 People cross to the north side of Farnam east of 40th Street on Monday. The Blackstone District’s makeover would include wider sidewalks meant to enhance pedestrian safety. 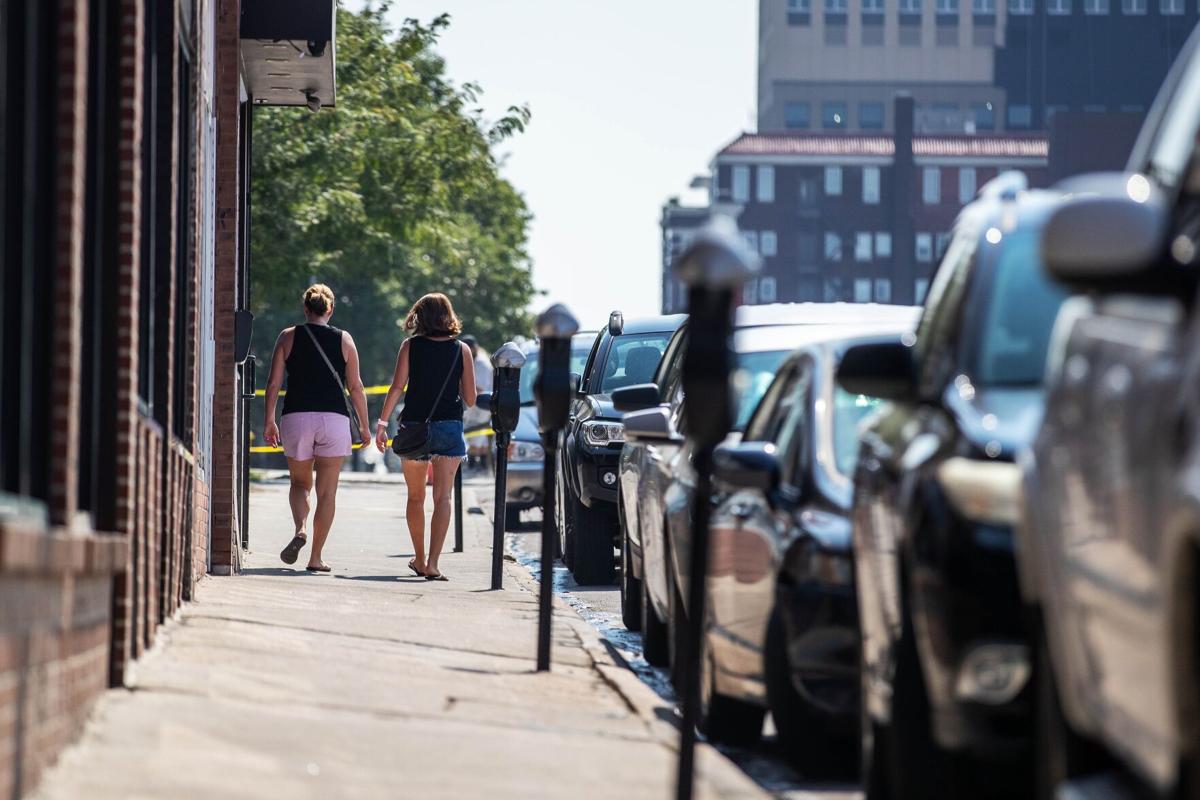 Two people walk east on Farnam Street toward 39th Street on Monday. Leaders from three Blackstone groups supporting the streetscape plan are optimistic the district can be sporting its new look in 2023. 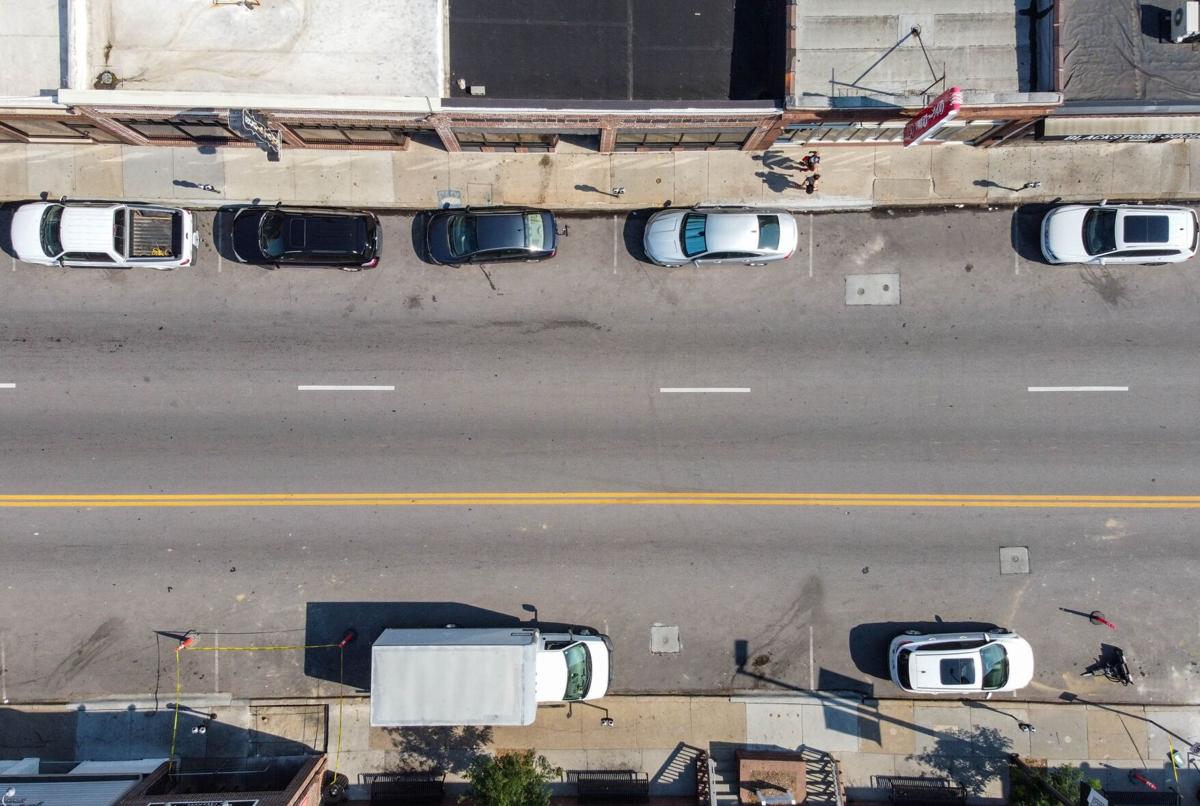 Two people walk westbound on Farnam Street toward 40th Street on Monday. Blackstone District has revealed plans for a streetscape makeover that will include widening sidewalks.