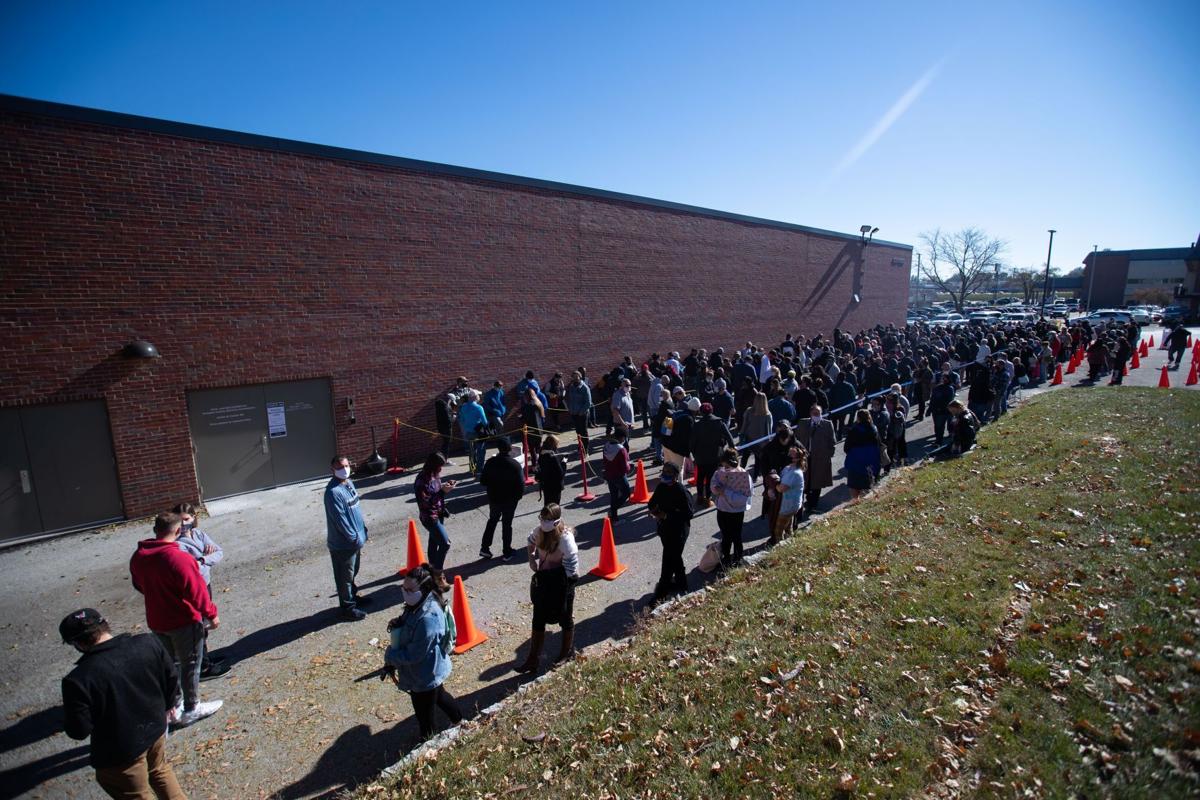 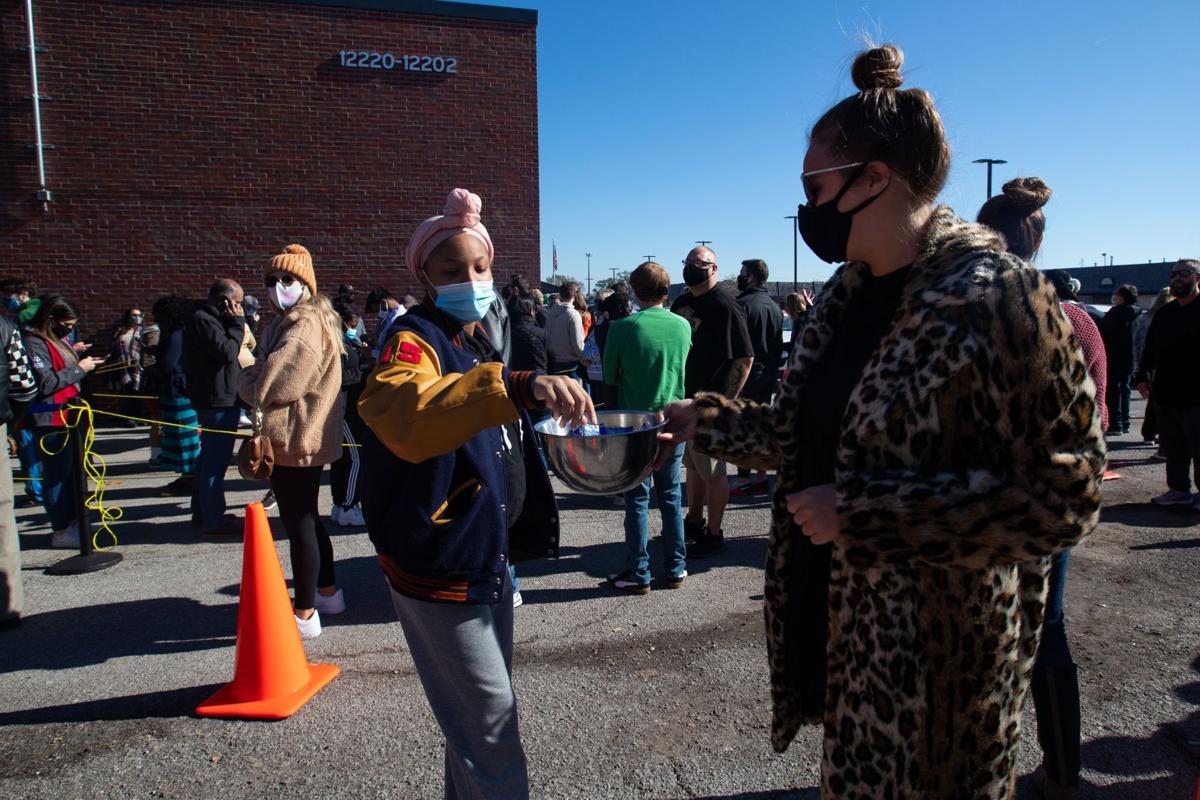 Chloe Ring, right, hands out candy to people in line to vote outside the Douglas County Election Commissioner’s Office in Omaha on Friday, Oct. 30, 2020. 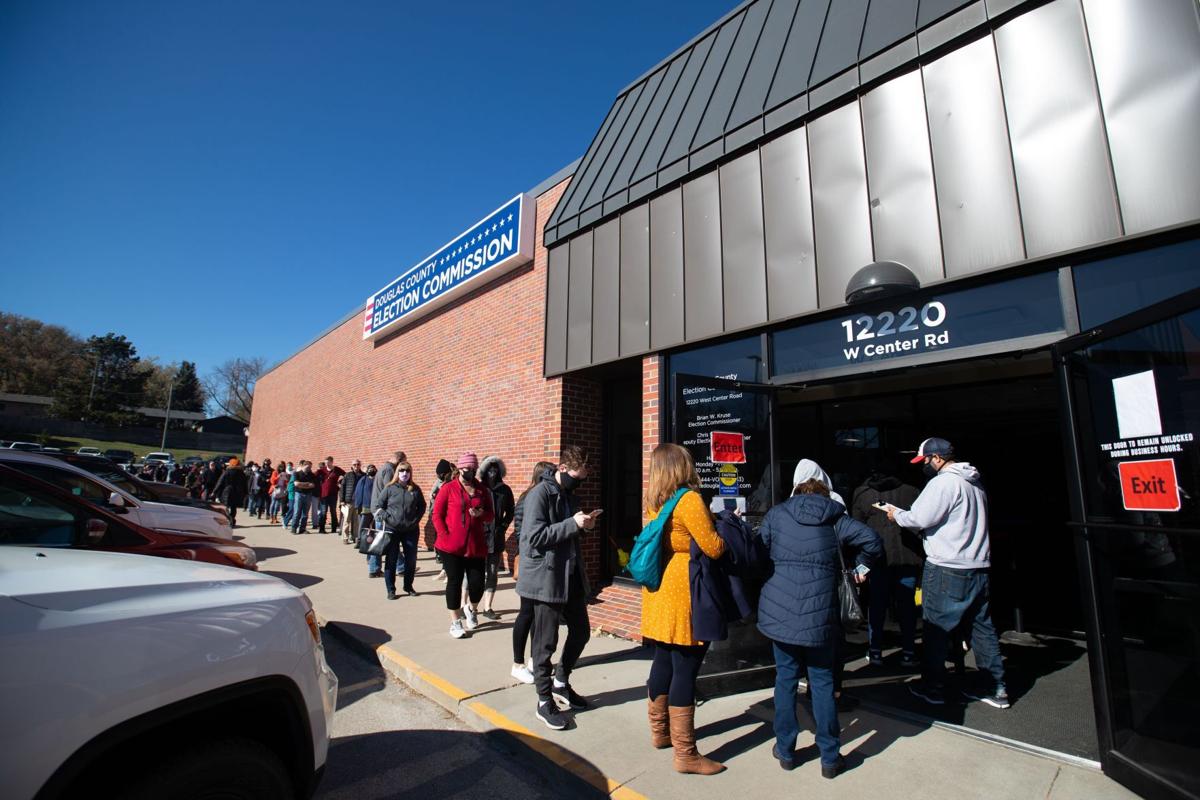 Just a few hours were left in a crazy Friday at the Douglas County Election Commission — with people waiting up to three hours to vote and one man ordering pizza for those in line.

Then the lights began to flicker.

A power outage brought voting to a halt at the office at 12220 W. Center Road a little after 3 p.m.

The cause: a squirrel messing with the electrical equipment.

“It turned out to be a little bit of a nutty day,” Douglas County Election Commissioner Brian Kruse said with a laugh.

He said that before the lights went out completely, he called an Omaha Public Power District representative, who moved quickly to resolve the problem.

The power was back on about 4:30 p.m., and the office’s phones and computers came back online about 5 p.m., Kruse said.

Voters who were still in line Friday were asked to fill out forms that were expected to be processed through the afternoon and evening, he said.

They were being asked to return Saturday morning to pick up their ballots at a dock on the east end of the building.

Kruse said any voters who could not return Saturday would be helped Friday evening.

The office will be open for an extended period Saturday, 9 a.m. to 5 p.m. It was originally set to close at 1 p.m.

Nebraskans who have not requested early ballots can vote early in person at local election offices through Monday.

Earlier Friday, facing a three-hour wait to get into the election office, Omaha injury attorney Aaron Brown dialed up Papa John’s and ordered four pizzas from his spot in line.

The pizzas were delivered to the Election Commission itself, but Brown eventually received his order and handed three boxes to strangers, sharing slices with some of the hundreds of other people waiting to cast their votes ahead of Election Day.

Long lines outside the Election Commission have been the norm for more than a week as Douglas County voters have turned out to vote ahead of Tuesday’s election. Kruse said Friday that he expected about 70% of people will have voted early.

Employees have helped people as late as 7:30 p.m. this week, he said.

“I’d just say bring your patience,” he said. “We’re working as fast as we can.”

Armani Manning, 24, showed up Friday afternoon hoping for a wait of about an hour.

Told that he would be waiting up to three times that long, Manning said he would have to consider casting his votes for Libertarian presidential candidate Jo Jorgensen and Democratic congressional candidate Kara Eastman on Tuesday instead.

Kruse said lines should be shorter on Election Day, but anyone who is in line at a polling place or drop box will have the chance to vote.

“Don’t be discouraged,” he said.

Masks and hand sanitizer will be available at all polling places.

On Friday, he decided to bite the bullet.

He waited in line to cast a vote for President Donald Trump.

Despite voting in recent elections, Wagle said he hasn’t filled in a bubble for a presidential candidate since George H.W. Bush in 1988.

The tipping point for Wagle this election was the “stark differences” between Trump and Democratic rival Joe Biden and the Republican and Democratic Parties. Trump can be a “loose cannon,” Wagle said, but he’s been pleased by the president’s actions on trade and jobs.

Leovin emigrated from Guatemala to the U.S. 30 years ago and became a citizen about five years ago. She said she’s been turned off by Trump’s stances on immigration and his words about immigrants, including 2015 comments that Mexicans coming to the U.S. were “rapists” or “bringing drugs.”

One of Leovin’s sons is in the Navy. She said she’s proud of her heritage and her citizenship. America’s 11 million undocumented immigrants need help, Leovin said, and she believes that Biden will provide for them.

“(Biden) can do something that’s better for the immigrant people,” she said.

“We are seeing lines wrapped around the building twice,” Andahl said, “which is not anything we’ve ever experienced in past elections, except on the last day of early voting.”

Voters are in good spirits, she said. “I think the nice weather doesn’t hurt.”

“For those coming in to vote early, bring patience, bring kindness and a sense of humor and just know that it’s worth the wait because they’re participating in our democratic process,” she said.

The state GOP, after receiving questions from reporters and election officials, sent rally attendees an email clarifying that the boxes were not "official" but rather provided by the Trump campaign.

Trump supporters left in cold for hours after Omaha rally; Biden weighs in with criticism

Trump campaign officials said they had enough buses ready nearby to shuttle people back to their cars, but said a larger-than-expected crowd slowed the buses’ return.

With one week until Election Day, thousands attended President Trump's rally in Omaha.

'I'm just kind of all over the place': Decision time for independent and undecided voters

As election day approaches, most Nebraska voters know who they want for president. But a few are still unsure. Here's what some of them are thinking.

Nebraska Secretary of State Robert Evnen, in a statement, advised voters to leave firearms at home, “to avoid problems of perceived intimidation.”

'It's my duty': Omahans, some in costumes, line up to cast their ballots

The day after a squirrel's run-in with electrical lines caused a power outage at the Election Commission, Omahans waited in line up to four hours to cast their votes Saturday.

In the tight race to 270 electoral votes, the single vote in the 2nd Congressional District has outsized importance.

Intersections at 14th, 15th and 16th along Douglas Street and 16th and Dodge Streets were impacted. Those intersections now have stop signs up to direct traffic. 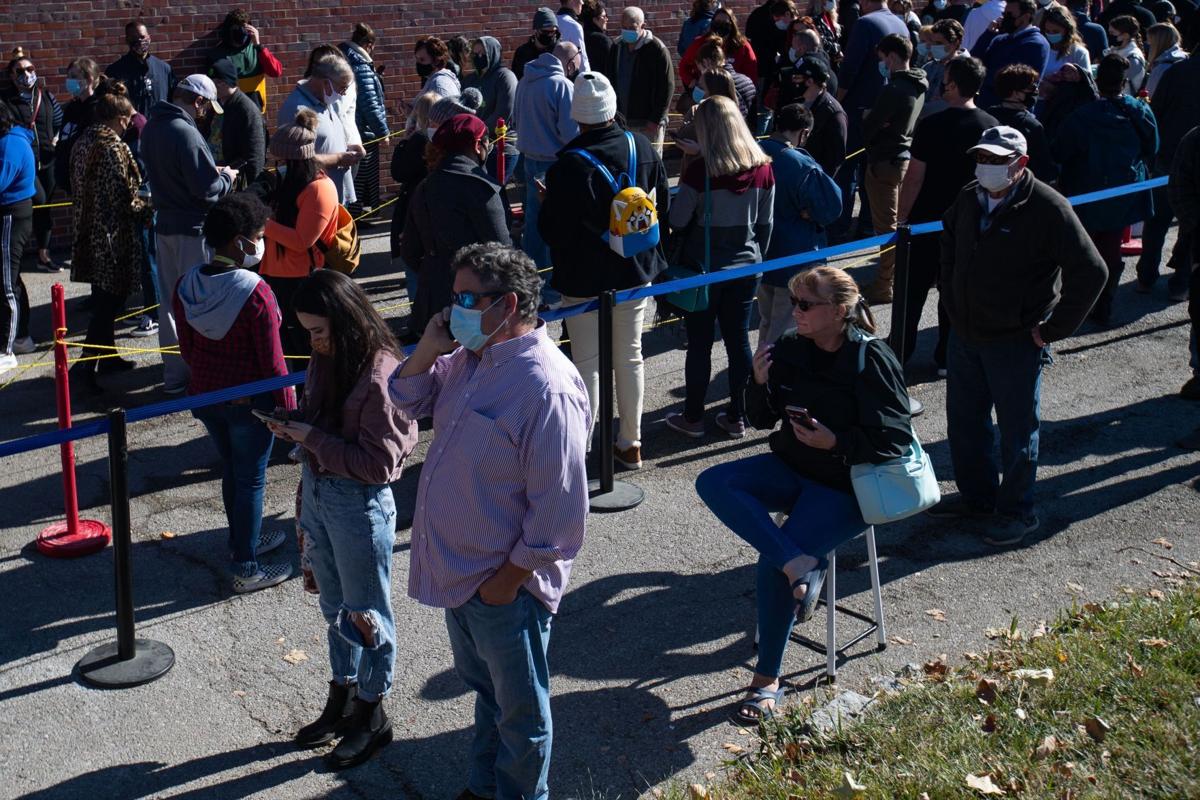 Jeri Triplett sits on a stool while waiting in line to vote outside the Douglas County Election Commissioner’s Office in Omaha on Friday, Oct. 30, 2020. Triplett said she waited in line for several hours Thursday, and didn’t get inside, so she brought the stool to sit on Friday. 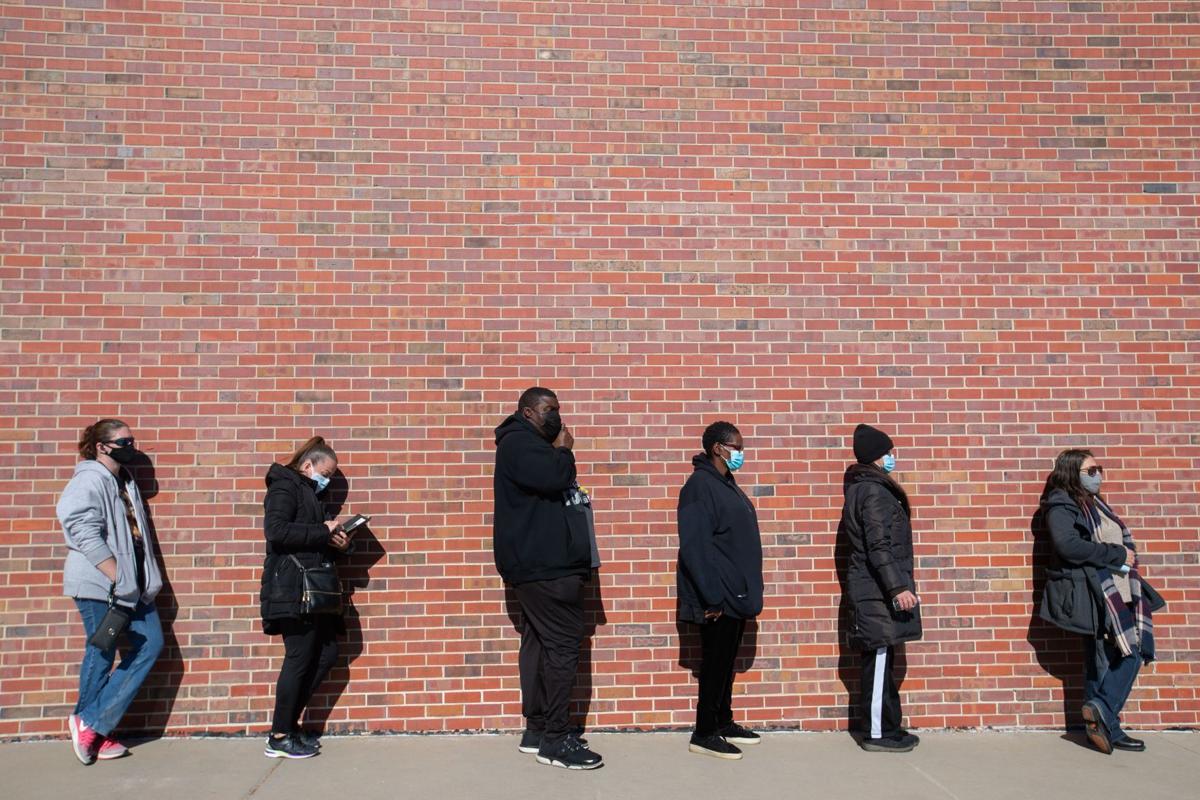 Douglas County residents wait in line to vote outside the Douglas County Election Commissioner’s Office in Omaha on Friday, Oct. 30, 2020.

Chloe Ring, right, hands out candy to people in line to vote outside the Douglas County Election Commissioner’s Office in Omaha on Friday, Oct. 30, 2020.