Chuckle? Hide in a bunker?

The social media world wasn’t quite sure what to do when the Nebraska-based U.S. Strategic Command tweeted out a bit of gibberish Sunday night on its official Twitter account.

The Twitterverse weighed in with plenty of snark, and some alarm, considering it was issued by the keepers of the nuclear keys right here at Offutt Air Force Base.

“Do they employ cats?” wrote one poster to reporter Valerie Insinna of Defense News, who had retweeted the message.

“Should we be ducking and covering now?” wondered another.

Thirty minutes later, StratCom issued a follow-up tweet apologizing “for any confusion” and asking that the previous tweet be disregarded.

And then it was deleted.

It had nothing to do with kittens or Armageddon — but a lot to do with telecommuting and toddlers.

In response to a Freedom of Information Act request from freelance writer Mikael Thalen, StratCom issued a statement saying that the Command’s Twitter manager was working from home when he stepped away from his computer with the Twitter account open.

You can guess what happened next.

His child, who is described as “very young,” sat down at the keyboard and started playing with the keys — and then, somehow, hit “Send.”

Before the manager figured out what happened, the toddler’s tweet had gone viral.

“Absolutely nothing nefarious occurred; i.e., no hacking of our Twitter account,” StratCom spokeswoman Karen Singer said in a statement.

Teleworkers who have seen Zoom meetings interrupted by pets or children may nod in sympathy at the story of StratCom’s typing toddler.

“All joking aside, we have all been there at some point this year,” Vipin Narang, an MIT associate professor who specializes in nuclear policy, wrote on his own Twitter feed.

StratCom welcomes New Year's with a bang in its bomb tweet, then apologizes

But it’s not the first time the command has gotten into trouble over its Twitter feed. On Dec. 31, 2018, StratCom posted a tweet of a B-2 bomber dropping a massive explosion and compared it to the “big ball” dropping in New York City’s Times Square on New Year’s Eve.

That tweet — which was deliberate, not accidental — was criticized by some as “crass” and “evil,” though it also drew 1,900 “likes.” StratCom also deleted that tweet, and apologized.

The weekend incident did renew calls from Narang, among others, for the Pentagon’s atomic gatekeepers to stop tweeting. 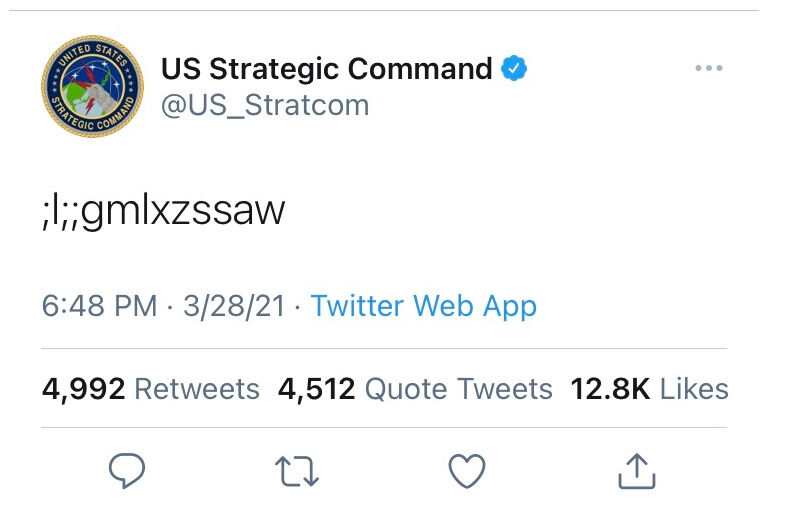 Offutt-based U.S. Strategic Command issued this puzzling tweet Sunday night. It turned out the young child of the nuclear command’s teleworking Twitter manager had gotten ahold of an open laptop that was briefly left unattended and issued the tweet, which was quickly deleted. 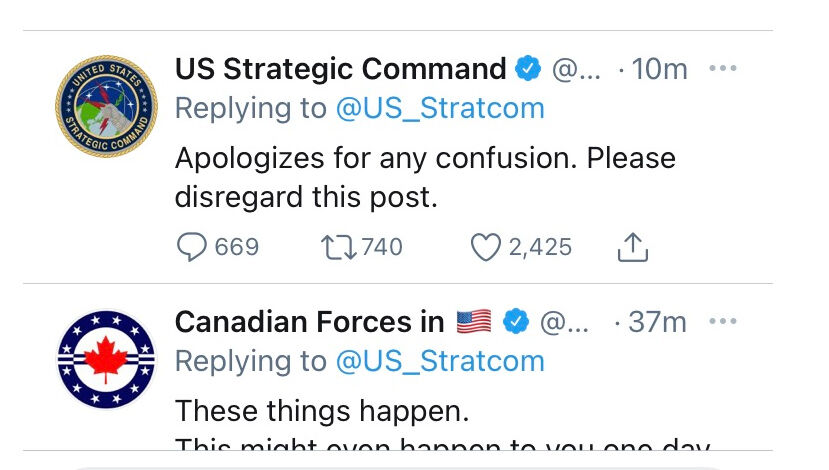