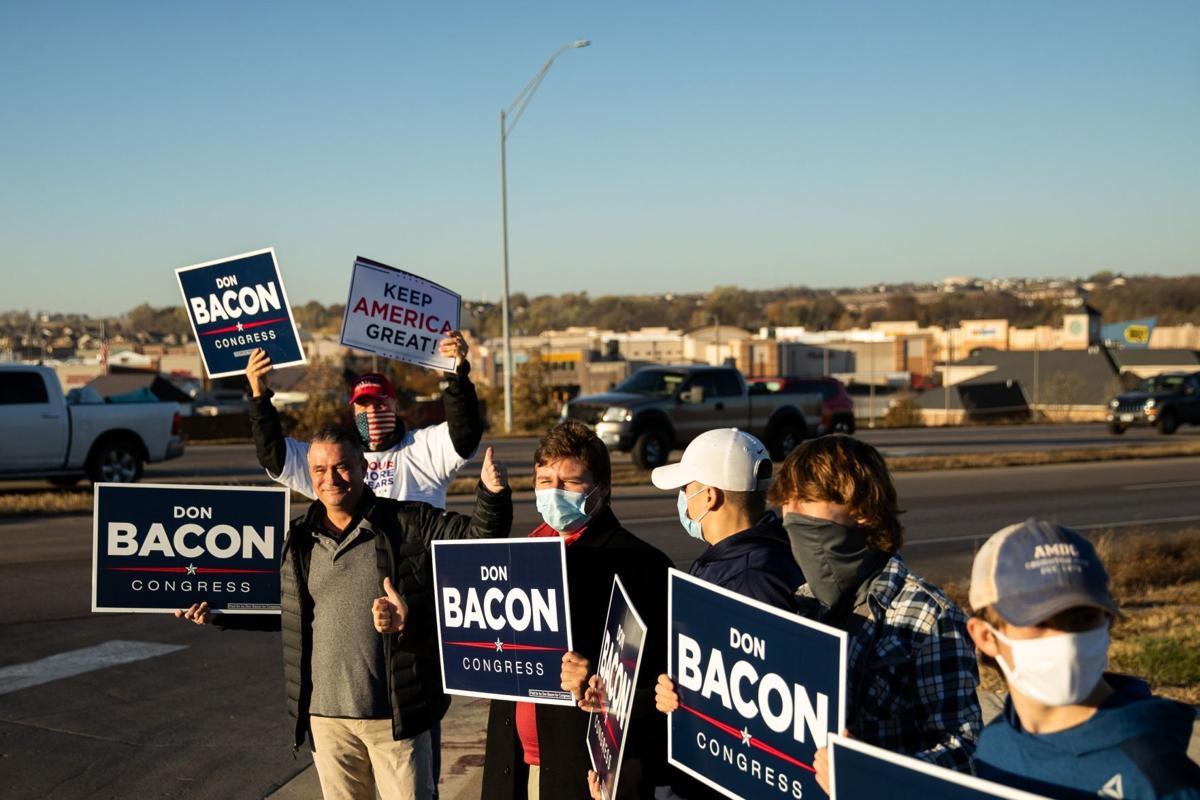 Rep. Don Bacon and supporters wave signs at the intersection of 72nd Street and Highway 370 in Papillion on Election Day. 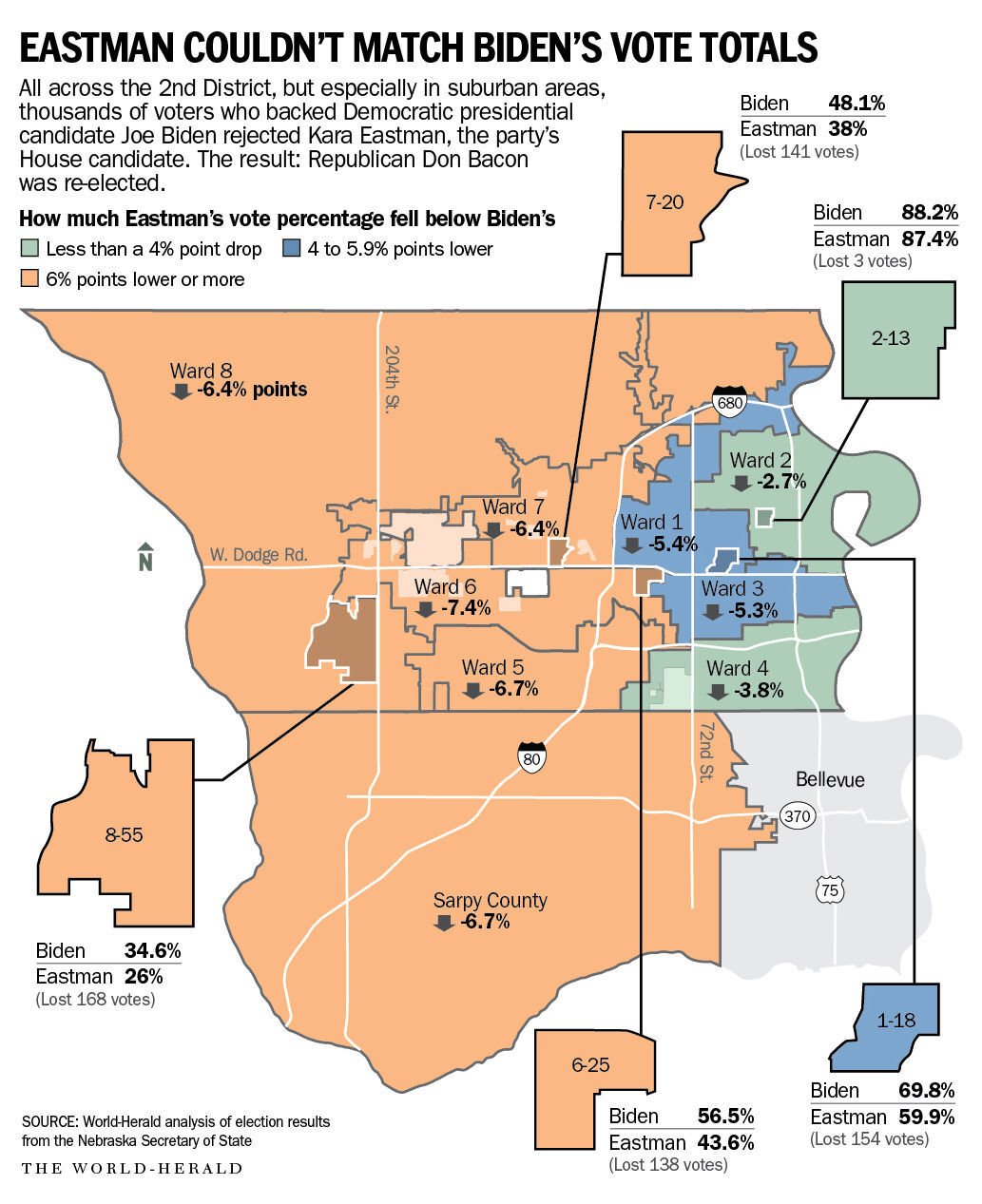 Next to that pair of Nebraska Republicans, however, was another sign featuring Abraham Lincoln in Aviator sunglasses and the slogan “Ridin’ with Biden.”

“My wife and I have always felt there are bigger things than policies that are involved in this election and that President Trump was not somebody that we could vote for,” Jackson said.

Jackson was one of many “Biden-Bacon” voters in Nebraska’s Omaha-based 2nd District who decided to split their 2020 tickets. That group was key to Bacon defeating his Democratic challenger, Kara Eastman, by several percentage points and securing a third term in Congress even as Democratic presidential nominee Joe Biden won the district and its lone Electoral College vote.

In all, Eastman underperformed Biden’s numbers by nearly 20,000 votes. She was able to stick close with the former vice president in heavily Democratic areas such as North Omaha. But she received about 4,000 fewer votes than Biden did in Sarpy County, a Republican-heavy area where voters such as Jackson live, and even in many precincts where both Biden and Eastman prevailed, her vote totals lagged his.

In Douglas County, Biden and Eastman both easily carried a precinct just north of Memorial Park, for example, but Eastman failed to run up the score there as much as Biden did. Instead she fell short of Biden’s performance by about 10 percentage points. A precinct that includes much of the Candlewood neighborhood in west Omaha also showed the difference. Trump edged out Biden, who got about 48% of the vote. But Eastman fared much worse, receiving only 38%.

Jackson said he has moderate views on certain issues but generally favors traditional Republican platform positions such as smaller government and religious freedom — making it easy to back Bacon and Sasse.

But underneath those policy preferences, he said, lies a more fundamental belief in American values. That includes prioritizing adherence to the law above one’s personal interests.

As a military veteran, Jackson took issue with what he described as Trump cozying up to dictators and refusing to speak out against Russia placing bounties on U.S. troops in Afghanistan.

Paul Landow, a political science professor at the University of Nebraska at Omaha, said those sentiments reflect rumbling for months ahead of the election that the district’s traditional GOP voters were fed up with the president.

“On the other hand, though, they were still saying, ‘But there’s no way I’m going to support a Democratic Congress,’ ” Landow said.

Landow also pointed to the massive outside spending that poured into the race. Much of that was spent on negative ads painting Eastman as too extreme for the district.

“They just shredded her with that ‘liberal, socialist, communist, who-the-hell-knows-what-all,’” Landow said. “Even if she wasn’t that far left, they figured out how to fix it so everyone thought she was. And I think that’s what did her in.”

Justin Myers is a senior at the University of Nebraska-Lincoln and a registered Republican from west Omaha who found he couldn’t support Trump.

“I didn’t vote for Biden because I was like, ‘Oh, I like his policy,’ ” Myers said. “I looked at Trump and I said, ‘This guy is so bad it might be worth putting a placeholder in for four years, and if I vote for Bacon I put a check on him.”

On social media, critics of the Biden-Bacon voters have questioned why anyone would give their support to Biden while simultaneously backing House and Senate candidates likely to oppose the bulk of his agenda.

That just seems like a recipe for gridlock, after all.

Myers said his hope is that a Biden victory and a new divided government would result in compromise rather than gridlock, with Biden and Capitol Hill Republicans sitting down at the negotiating table.

He said he had to swallow hard to fill in that Biden vote, however, as he pondered his early ballot at home.

“I spent the last 10 years reading the National Review so I pretty much just sat there and stared at the ballot for 30 minutes and was like, ‘Can I do it? Can I do it?’ ” Myers said. “I went and took a shower after I did it and it was fine.”

The 2020 results recalled the 2008 race in which then-Rep. Lee Terry, a Republican, won reelection even as Democratic presidential nominee Barack Obama took the district. Terry had made an explicit appeal to “Obama-Terry voters” during his campaign.

In the same vein, both Bacon and Eastman touted bipartisan endorsements they secured and their ability to work across the aisle.

Bacon landed the support of the man he defeated for the seat in 2016, former Democratic Rep. Brad Ashford.

During his victory speech, Bacon specifically cited Ashford’s support and called an ad featuring the endorsement a “game changer” that moved independent voters his way in large numbers.

Westside voter Sean Sindt, 18, is another UNL student who supported Biden and Bacon. He’s a registered Democrat but considers himself more of an independent.

Sindt has a congenital heart disease called aortic valve stenosis and anticipates that he may need surgery for it at some point. One reason he voted against Trump was that the president has pushed to eliminate the Affordable Care Act, which prevents health insurance companies from charging him higher premiums for his preexisting condition.

Sindt understands that Bacon himself has supported Republicans’ ACA repeal-and-replace legislation, but he said he found Bacon to be personable and a good fit for the district. He said he voted for Brad Ashford’s wife, Ann, in the May 2020 Democratic primary; he described Eastman’s policies as “too radical.”

“If Ashford or someone more moderate would have been in the election,” Sindt said, “then I would have voted for them.”

As votes continued to be counted in several key states on Wednesday, a plausible scenario emerged in which the lone vote Joe Biden received from Nebraska could end up putting him over the top.

The Nebraska race had not been on the national radar, but Democrat Bolz gave Fortenberry a surprisingly strong challenge.

'There's a lot of money to be made': North Sioux City businesses brace for recreational marijuana

South Dakota voters on Tuesday approved Amendment A, which legalizes the possession, transportation and distribution of up to an ounce of marijuana for adults age 21 and older.

Nebraskans who support Joe Biden have joined in on social media, tweaking the city's name to "Joemaha" and commenting that they are not from Nebraska or Omaha — they're from the 2nd District.

President-elect Joe Biden’s supporters were jubilant Saturday, with Nebraska Democrats celebrating the part they played in sending him to the White House.

Nebraska's 2nd District Democrats had a little swagger in their step after delivering an electoral vote to President-elect Joe Biden.

Former Rep. Doug Bereuter, R-Neb., and other former GOP House members say the president's election fraud allegations are "efforts to undermine the legitimacy of the election and are unacceptable."

The Justice Department's investigation of the plea deal made with Jeffrey Epstein concluded it was made using "poor judgment." Sen. Ben Sasse on Thursday called it "a disgusting failure."

Dancing for joy: Women thrilled to see Kamala Harris 'at the big table'

Many are celebrating the fact that a woman will be joining President-Elect Joe Biden in the White House. “It’s a good step in the right direction as far as equality for everyone,’’ said Anou Akot, senior class president at Mercy High School. “I was very excited.’’

Her political future looks bright, some say, but Kate Bolz says she's ready for a change of pace

After eight years in the Legislature and a run at the 1st District congressional seat, Kate Bolz says, “It’s time to turn a little bit more of my time and energy toward the personal side."

Midlands Republicans have differed in their willingness to confront the inevitable now that Biden is projected to win a total of 306 electoral votes, well above the required 270.

Sen. Ben Sasse criticized President Trump's approach and thinks the Republican Party needs to move away from it. Is he aiming to run in 2024?

Many believe unsubstantiated claims about election fraud. “It is bad for democracy, because it’s not true,” says one Republican campaign consultant.

Former Omaha Rep. Brad Ashford, a Democrat breaking with the Republican candidate he endorsed last fall, Rep. Don Bacon, says the House and Senate should vote for impeachment — and do so quickly.

Rep. Don Bacon and supporters wave signs at the intersection of 72nd Street and Highway 370 in Papillion on Election Day.