Coronavirus update: US jobless claims fall below 1 million but remain high. Get the latest.

Grace: Words of solace in an empty cathedral on Palm Sunday. 'I have you all in my imagination'
0 comments
Share this
Only $5 for 5 months
1 of 4 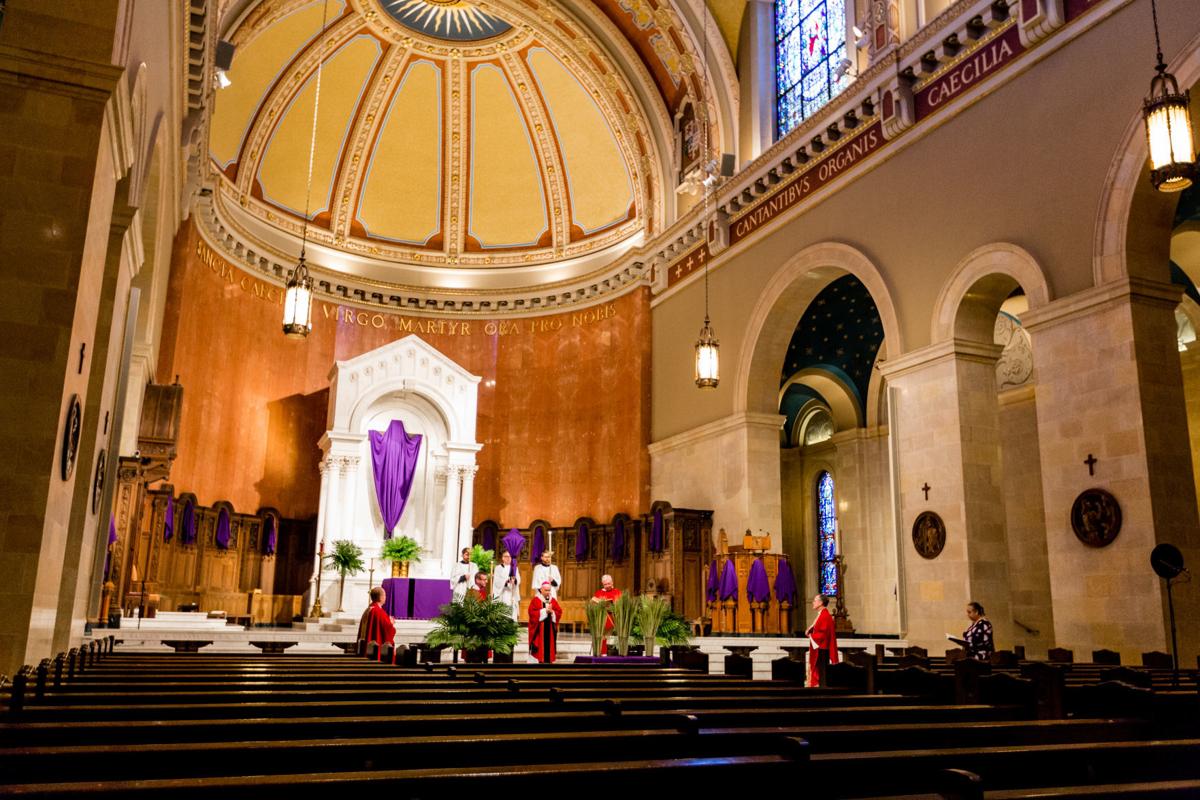 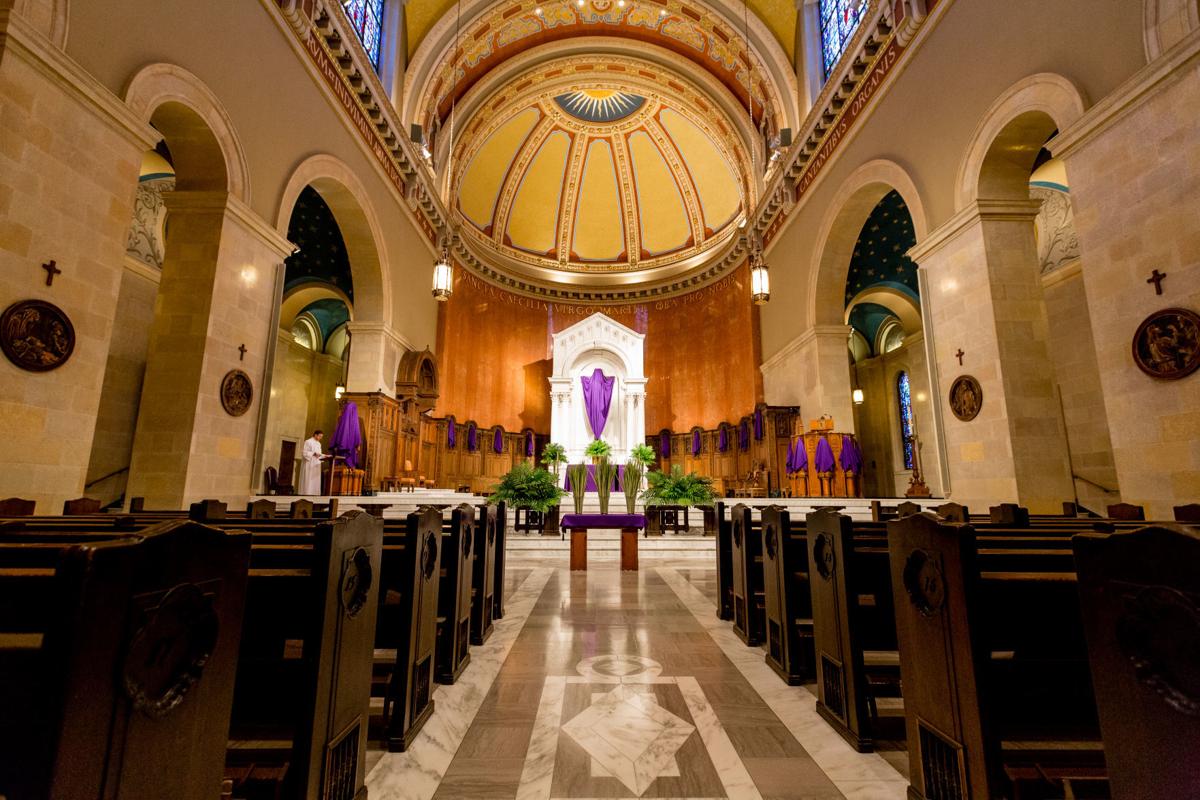 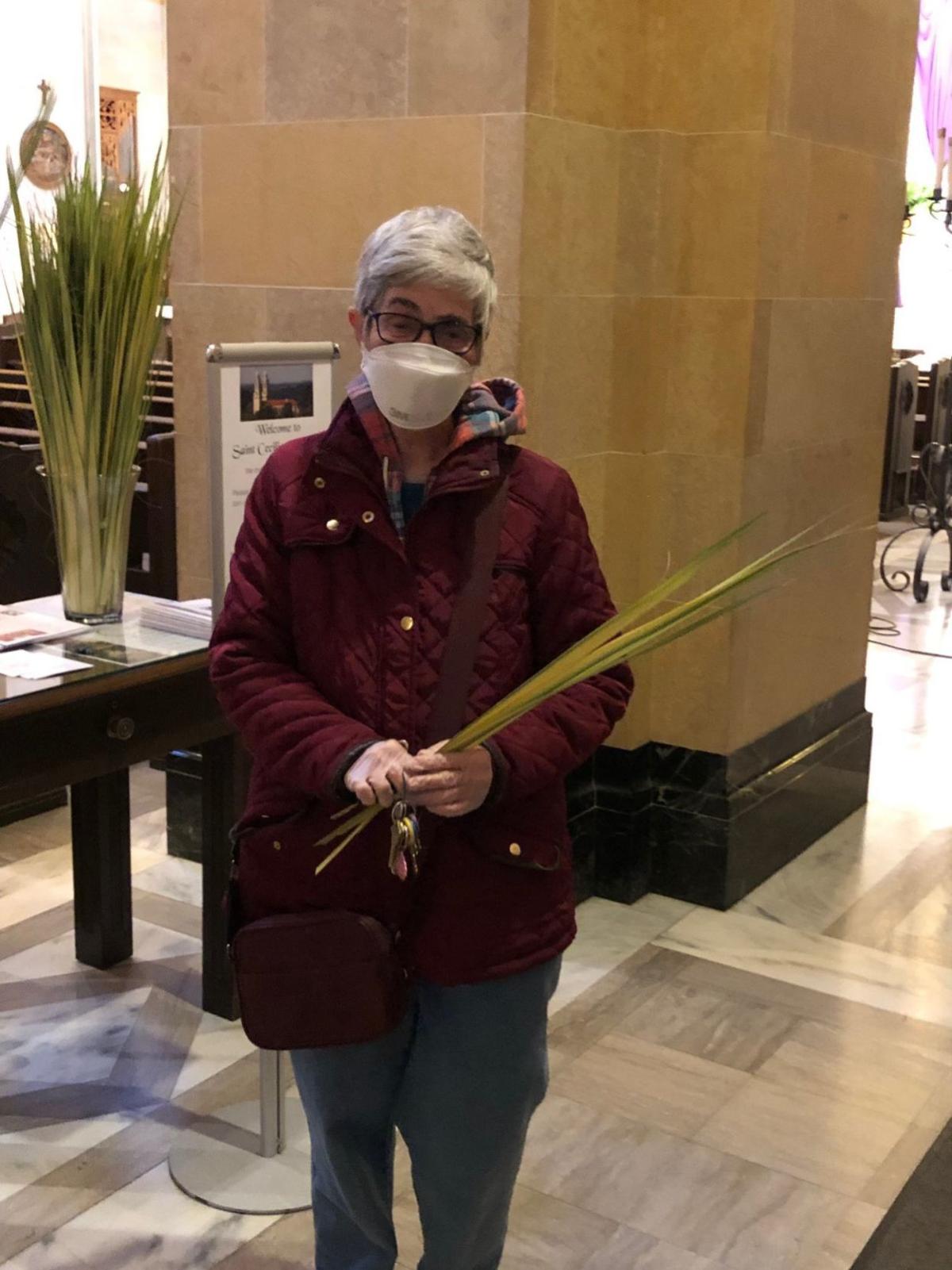 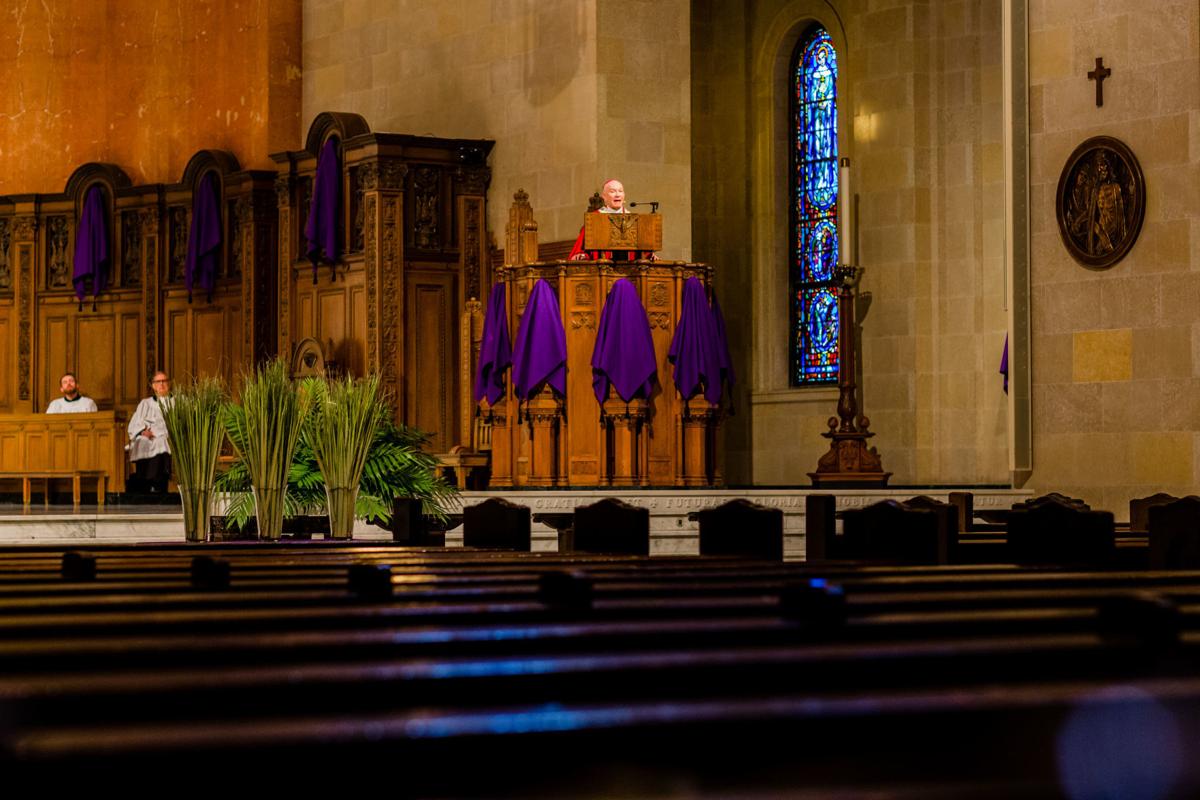 Omaha Archbishop George Lucas gives a Palm Sunday homily. He encouraged the livestream audience to look to Jesus during the coronavirus pandemic. “We invite him in. We ask him to be part of our lives,” Lucas said. “He will lift us up and carry us.”

On Palm Sunday inside St. Cecilia Cathedral, Archbishop George Lucas blessed buckets of cut palms at one end of the midtown Catholic church. High in the choir loft on the opposite end, the organist played Bach.

Between the two humans lay a vast cavern of emptiness. Aside from a handful of people on the altar and three crewmen livestreaming the important Palm Sunday liturgy, the magnificent house of worship that can hold almost 1,000 people was bare. No one in the long wood pews. The absence was seen and heard: no clattering of kneelers, no thudding of missals and hymnals against the wood holders, no shuffling of bodies. No choir in the choir loft. No footfalls from the ushers. No lone baby’s cry.

Even the saints seemed absent with their statues draped in purple, in keeping with Catholic Lenten practice of removing distractions. This meant Jesus, too, was covered. The large gold-painted sculpture of Christ over the altar was draped in purple.

Viewers watching at home — there were 1,000 at any given time, according to Ben Drickey, a parishioner and owner of a video production company who filmed the Mass — could not have felt the palpable loneliness. But looking out at the empty pews, the archbishop noted that in a poignant homily that addressed his own sadness of missing the faces of “God’s people,” the human stories held in the normally full pews.

“I offer this Mass for all of you,” he told the empty church and camera. “I have you all in my imagination.”

The empty seats and locked church doors are by health directive. Not even this beautiful church, which, in full disclosure is my parish church, is immune from the novel coronavirus that has shut down city life. This pandemic has made one of the most vital parts of being human — the company of others — a terrible risk. A community’s lifeblood now must occur behind closed doors and on screens.

Churches like mine are livestreaming their services or finding creative ways to fill the empty spaces in pews and hearts. The lead pastor at St. Paul United Methodist Church in Benson is creating daily devotionals online centered on her snow globe collection. The pastor of Trinity Lutheran in Lexington, Nebraska, wore a mask and gloves to hand out palms to parishioners in parked cars following a livestream that corn and soybean farmer Don Batie was promoting on Twitter.

“I know it’s going to be different than we are used to, but try to remember that this is the start of Holy Week,” Batie wrote, adding the link so people could watch.

The connections, even in two dimensions, are vital. The screens can bring the solace of the familiar into people’s homes.

“If only for a moment, it allows them to connect with a part of their lives they have been missing,” said Drickey, who will film the Easter Sunday Mass at St. Cecilia as well.

The livestreams display a kind of show-must-go-on resilience in the face of crisis, and that was evident at St. Cecilia, where the flawlessly played organ music of director Marie Rubis Bauer and the sacred chant of the lone cantor filled the empty space with life.

Lucas tried to bring comfort and remind viewers of the relevance of the Palm Sunday story. Palm Sunday presents Christians with the paradox of their faith: exaltation in humiliation, life in death, hope in sadness. Jesus enters Jerusalem to throngs of cheering believers who have laid down their cloaks and palms in his path. All these centuries later, that practice is repeated as worshippers take home palms that have been blessed and keep those symbols of faith visible in their homes.

Lucas said it was important in challenging times, in days of “great desolation,” to look toward Jesus.

“We invite him in. We ask him to be part of our lives,” Lucas said. “He will lift us up and carry us.”

After the hour-plus service, the locked church doors were open. People were free to enter St. Cecilia in small, socially distanced groups to take palms home.

Madeline West, the lone lector, took her palm and shook her head. It’s not the same in an empty church where even her husband couldn’t come sit. She had a point: The reality of our time is most evident when present in familiar places that are eerily different. Think empty Dodge Street at rush hour, empty parking lots, downtown’s ghost town.

Parishioners who had watched the livestream had begun appearing for their palms. Among them was a family of five: a pair of doctors, Heather Gomes and Mac McLaughlin, and their children, ages 10, 8 and 6. The family had watched Mass in their living room with a speaker and candles. Then they walked to church for the palms.

“Although we physically cannot be together, we appreciate the effort ... to connect through technology and social media,” said Gomes, an otolaryngologist.

Clarie Meredith had come wearing a face mask. The retiree who works part time as a caregiver had watched the livestream and said it was important to connect safely, especially to people who don’t have many interactions. Her parish group is calling elderly parishioners to check in and pray.

Meredith gamely posed for a photo but said her mask hid something.

It was a symbol for our time. The smile might be hidden. The church doors might be closed.

But behind the masks and locked doors are people, trying in their own ways to bring light.

Resurrection rolls are a tasty treat that tell the Easter story

Jesus’ death and resurrection can be a difficult concept to wrap your head around — especially if you’re a child. Resurrection rolls are a cre…

How to celebrate Easter, Passover or Ramadan during the coronavirus pandemic

With Passover starting Wednesday, Easter on Sunday and the holy month of Ramadan beginning at sundown April 23, celebrations will be different this spring. But they will still be happening. Things will just have to be on a much smaller scale. That’s important to remember no matter how much you want to be with your extended family.

Get in the Easter spirit with these sugar cookies

If you’re looking for a festive way to celebrate Easter or spring (or just to kill an afternoon in quarantine), give this sugar cookie recipe a try.

Instead of Easter eggs, hunt for painted rocks — or make and hide some yourself

All year long, the Facebook community group #402Rocks! paints and hides rocks throughout the Omaha metro area to brighten people’s day. Join the movement — while practicing an abundance of caution — by painting rocks and leaving them along pathways, in flowerbeds and elsewhere for friends, neighbors, loved ones — even strangers — to enjoy.

These movies will get you in the Easter (or Passover) spirit

There are a few worthy entries in the Easter and Passover movie canon, so let’s try to sort out which movie is the best one for you. Because let’s face it: You’ll need something to keep you occupied after your Facebook Live Easter service or Zoom seder ends.

One local mom is trying to keep the Easter spirit alive for other families.

The shield is intended to provide health care workers with an extra layer of protection from contagion and help conserve limited supplies of protective gear.

'It's rewarding': Why a Bellevue company moved from making video game parts to face shields

Thousands of patriotic lights are illuminating the Salvation Army Kroc Center in South Omaha in an effort to boost community spirits as Nebraska enters the toughest weeks of the coronavirus outbreak.

Baker's to limit number of customers in stores, piloting one-way aisles in some markets

Baker's and other Kroger's stores will close early on Easter Sunday.

Joe Ricketts' Cloisters on the Platte to offer online retreat

More than 10,000 members will be able to participate in a virtual retreat based on the teachings of St. Ignatius, starting Thursday.

Grace: A 'blindsided tragedy' as 19-year-old's life of promise ends too soon

Born in a refugee camp, the 19-year-old basketball player grew up in Omaha and had dreams of becoming a teacher.

Feeling despair? There is help.

This is a stressful time. It can be particularly tough for young people whose fresh futures might seem out of reach and certainly now are disrupted by the novel coronavirus.

Grace: Tips from an Omaha psychologist (and his mom) on keeping sane in rough times

Grace: Nebraska should send clear message, like a stay-at-home order, to defeat coronavirus

Erin Grace: To see her adult son, this mother had to sneak by in costume

Coronavirus adds extra challenge and heartache for loved ones of people with disabilities.

Iowa's four bishops said they would monitor conditions through May and beyond.

We're not even halfway through the year and already there's some new horror.

Churches agree 'faith is essential,' but while some reopen now, others wait during pandemic

Of 85 churches we contacted, 20 had opened by this weekend. Thirteen others have set opening dates at least tentatively, bringing the total to 33 that plan to be open by the end of June. That’s still fewer than two out of five churches contacted. 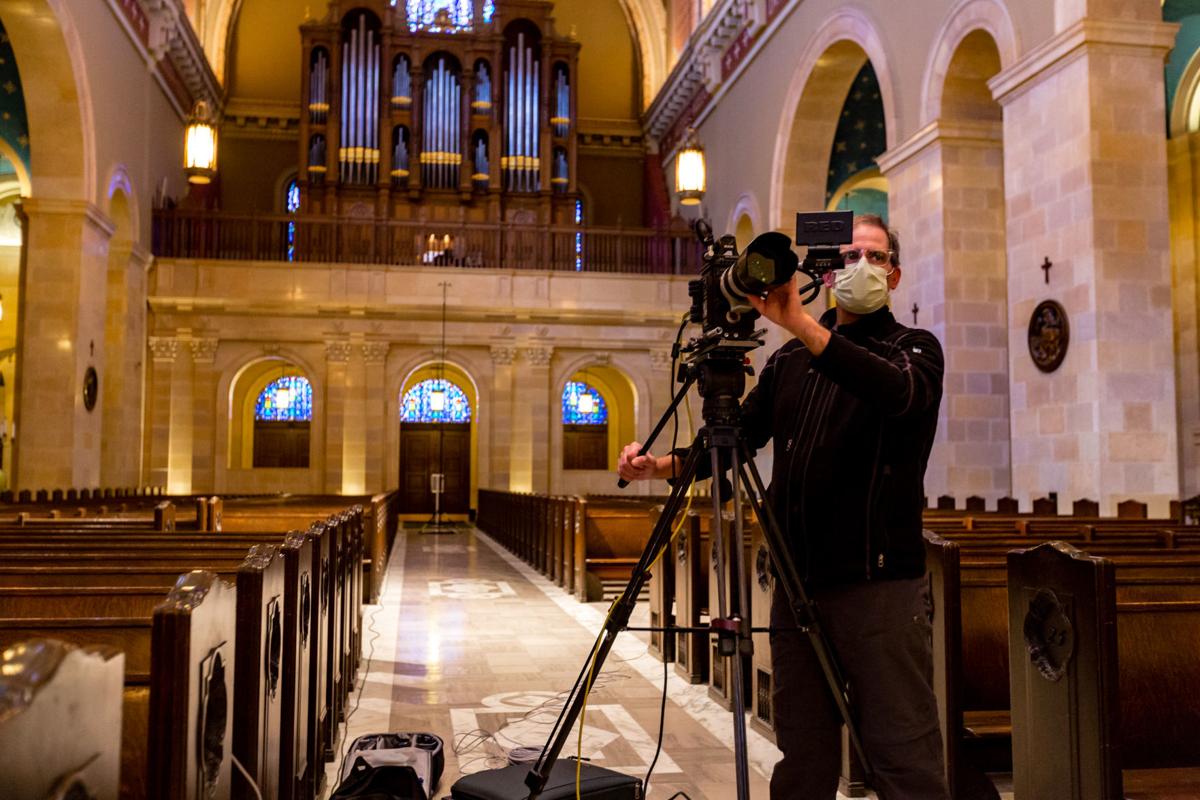 Ben Drickey, a St. Cecilia parishioner and owner of a production company, is livestreaming Holy Week Masses for the Archdiocese of Omaha.

Omaha Archbishop George Lucas gives a Palm Sunday homily. He encouraged the livestream audience to look to Jesus during the coronavirus pandemic. “We invite him in. We ask him to be part of our lives,” Lucas said. “He will lift us up and carry us.”