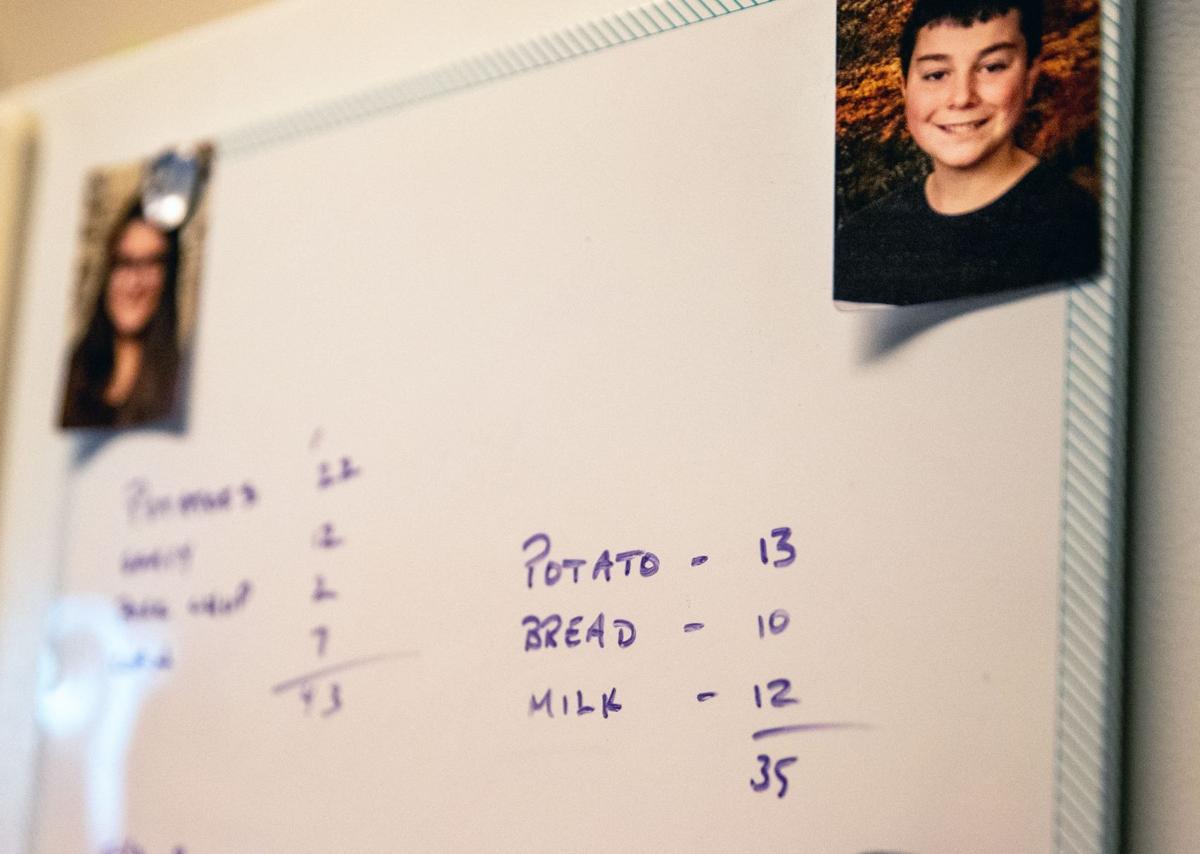 A whiteboard on the Regalado family refrigerator keeps track of the units of insulin Matt must take based on his insulin-to- carbohydrates ratio. 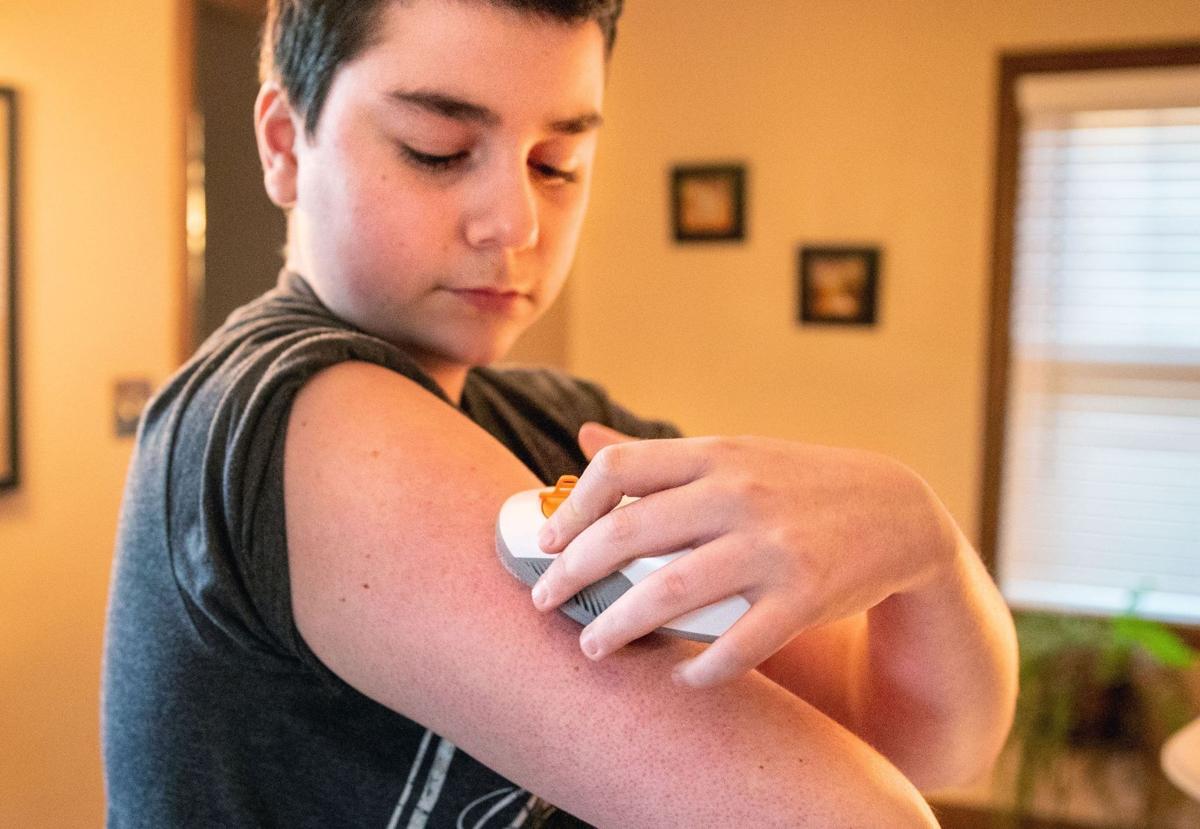 Matt Regalado, a 14-year-old Type 1 diabetic, attaches a sensor to monitor his glucose level. The sensor sends the information to the family’s smartphones. 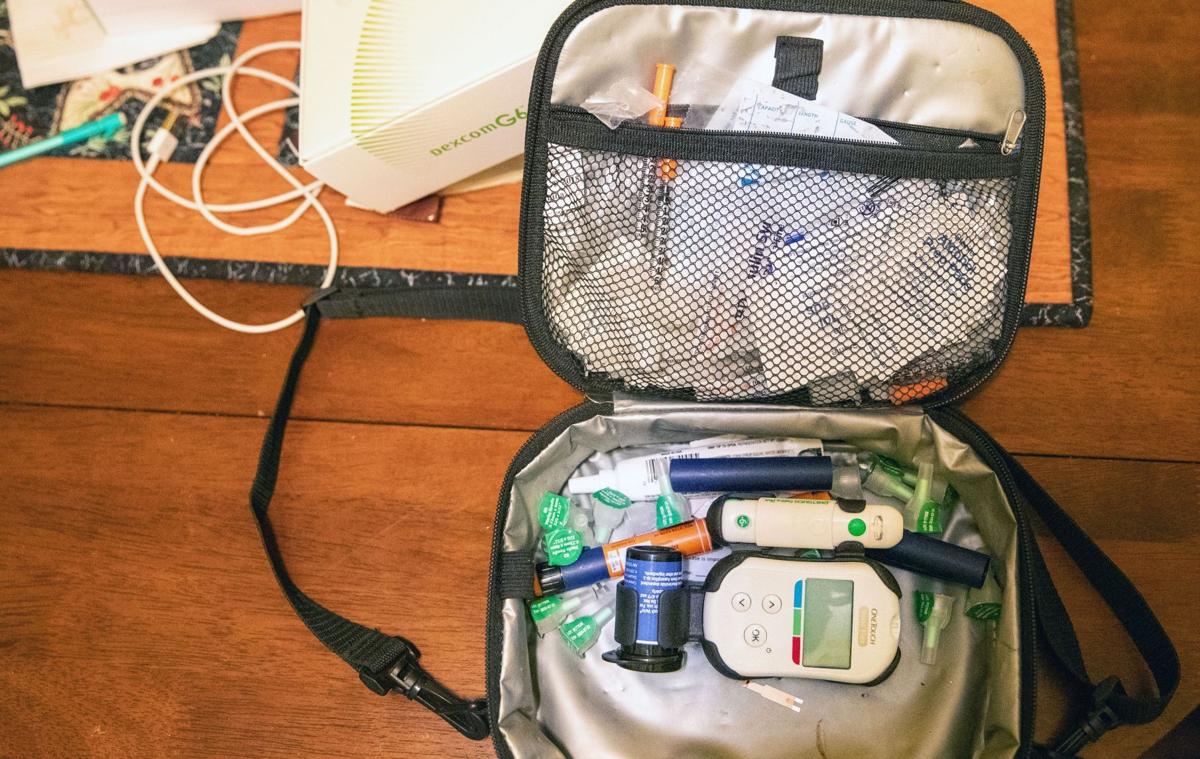 Insulin testing strips and other supplies that Matt Regalado, 14, uses to monitor his Type 1 diabetes.

TEKAMAH, Neb. — Rod Regalado wasn’t expecting anything out of the ordinary when he took his then-13-year-old son, Matt, to the doctor for a sports physical.

Matt wanted to play basketball at Tekamah-Herman High School. The physical was routine.

But after that September visit, the doctor’s office called. Matt’s blood sugar levels were elevated. That triggered another test, followed by a call the next day advising Regalado to take his son to Children’s Hospital & Medical Center in Omaha. Right away.

Matt stayed for three days. He was diagnosed with Type 1 diabetes, a condition in which the person’s immune system attacks and destroys the insulin-producing cells in the pancreas.

The diagnosis and the high costs that go along with it were the catalyst for legislation offered last week by Rep. Jeff Fortenberry, R-Neb., that would limit the price of insulin for the roughly 7.5 million Americans who depend on insulin. That includes almost 1.6 million Americans who, like Matt, have Type 1 diabetes, according to the American Diabetes Association. The bill is co-sponsored by Rep. Angie Craig, D-Minn.

Before he could take his son home, Regalado had to buy insulin and other supplies at an estimated cost of $700.

“It was really spendy,” he said. “But I didn’t care. I would have given them everything just to get him out of there. I just wanted to get him home.”

After a couple of weeks, Regalado began getting more bills — and questioning the prices. The cost of one type of insulin went up 20%; the other went down 10%. But none of it was cheap.

Regalado, an industrial compressor salesman used to dealing with pricing, called the pharmacy and his insurance company. Finally, he reached Fortenberry’s office.

“I said, ‘This is not acceptable. People are dying, and they’re rationing this stuff,’ ” Regalado recalled.

Fortenberry said in a statement that the bill’s intent is to cut the price of insulin by as much as two-thirds by creating a new model for delivering the drug that provides substantial cost savings for all patients.

“Many see the costs of their lifesaving drugs go up and up and up,” he said. “Patients skip their doses because they can’t afford their insulin, and this can land them in the hospital. They deserve better.”

Rising insulin costs have prompted congressional inquiries and public concern. That ramped up last year with the deaths of several young people who were reportedly rationing medication because they couldn’t afford it.

Fortenberry isn’t alone in wading into the issue of high insulin prices, not to mention high drug prices in general. The Trump administration has proposed a program that would cap copays for most people with Medicare at $35 a month. A Senate bill introduced last year takes aim at the complex mechanism behind insulin pricing, incentivizing reductions in list prices for the medications.

States have also taken on the issue. Last year, Colorado adopted a law placing a $100-a-month cap on insulin copays for insured patients. Similar legislation was introduced in more than 30 states this year, with more than eight enacting the caps. Legislatures in two more states have approved caps and are awaiting their governors’ approval of the measures.

In Nebraska, two bills would cap out-of-pocket costs for many insured patients at $100 a month. State Sen. Kate Bolz of Lincoln, who is running against Fortenberry, introduced Legislative Bill 949. Sen. Justin Wayne of Omaha proposed LB 970.

A hearing on the bills in February drew testimony from a number of Nebraskans who have struggled with the medication’s high price. One small-business owner told of twice ending up in an emergency room after trying to ration the drug. Even after marrying and getting on his wife’s insurance, he still pays hundreds of dollars a month for the four types of insulin he needs to control his diabetes.

Bolz said her bill is not expected to advance during what’s left of the legislative session, which restarted last week after suspending due to COVID-19.

Wayne said he’s not sure that the Legislature will get to his bill, either.

“If the federal government doesn’t do anything, we’ll pursue it again next year,” he said. “It’s not something I’m going to give up on.”

Regalado said he prefers Matt’s Act because the state caps don’t apply to those who lack health insurance. Nor do they typically apply to the self-funded plans commonly provided by large employers.

“That’s a huge distinction,” he said of the bill’s inclusion of the uninsured.

Essentially, Matt’s Act would assure every patient access to insulin at the net price for the medication, plus a small fee for transportation and the pharmacist. The list price for insulin is often more than $300 a vial. Net price is more than 70% lower than the list price. That works out to an estimated $60 per vial, plus the small charge for distribution and dispensing for all patients. The uninsured may have to pay the full $300 or more for a vial of insulin if purchased directly at a pharmacy.

An American Diabetes Association official told a congressional committee last year that insulin prices are causing patients’ out-of-pocket costs to rise and creating a financial burden for many who need insulin to survive. Indeed, people with diabetes have medical expenses 2.3 times higher than those without diabetes, according to the federal Centers for Disease Control and Prevention.

A number of studies have documented the increasing cost of the medication. The average price of insulin almost tripled between 2002 and 2013, according to a 2016 study published in the Journal of the American Medical Association. A March 2019 memo from the House Energy and Commerce Committee indicated that prices have continued to climb, almost doubling between 2012 and 2016.

Regalado said he feels fortunate. He has a good job and good insurance. But he worries about Matt, his long-term health and the impact the costs that come with his condition will have on his future.

After the teen returned home, the family worked to deal with their new routines — finger pricks nine times a day to check blood sugar levels, counting carbohydrates to determine how much insulin Matt would need. They tracked them on a whiteboard on the refrigerator.

“We’re a team, so we do everything together,” she said.

Matt, now 14, uses two types of insulin, a short-acting version after eating and drinking and a long-acting type that helps even out his blood sugar. He also uses a continuous glucose monitoring system that sends alerts to the family’s smartphones.

Regalado, meanwhile, is in the process of setting up a website and a nonprofit organization structured to allow him to lobby for the bill. On his mind are all the other Americans living with diabetes.

Separate suits allege that the clinics targeted older residents with claims that treatments could reverse aging and treat, cure or prevent a variety of medical conditions.

The state of Nebraska closed out its last fiscal year with barely $10 million to spare for any new spending or tax cuts.

They hadn't seen each other for over half a century, but the coronavirus and a broken arm brought these long-lost sisters back together.

Staying calm, she leaned the seat back, kicked up her legs on the dashboard and delivered the baby.

In a move to preserve limited testing supplies, CHI Health will no longer require patients to take a COVID-19 test before surgery.

The effort will also use tools such as videos and storytelling to allow people to share their experiences with mental health concerns and help them connect with others.

A whiteboard on the Regalado family refrigerator keeps track of the units of insulin Matt must take based on his insulin-to- carbohydrates ratio. 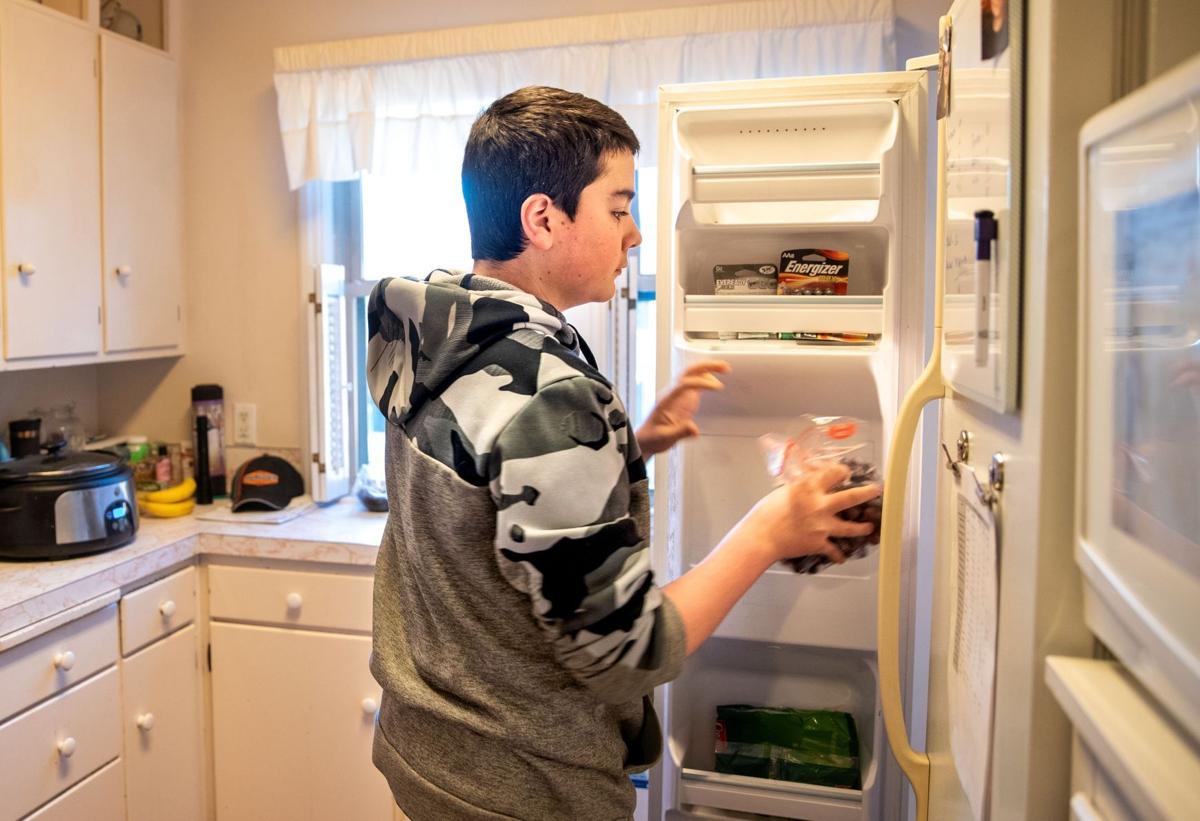 Matt Regalado, 14, prepares a snack of grapes after school earlier this year at the Regalados’ home in Tekamah, Nebraska. Regalado has been adjusting to living with Type 1 diabetes after his diagnosis in September 2019. 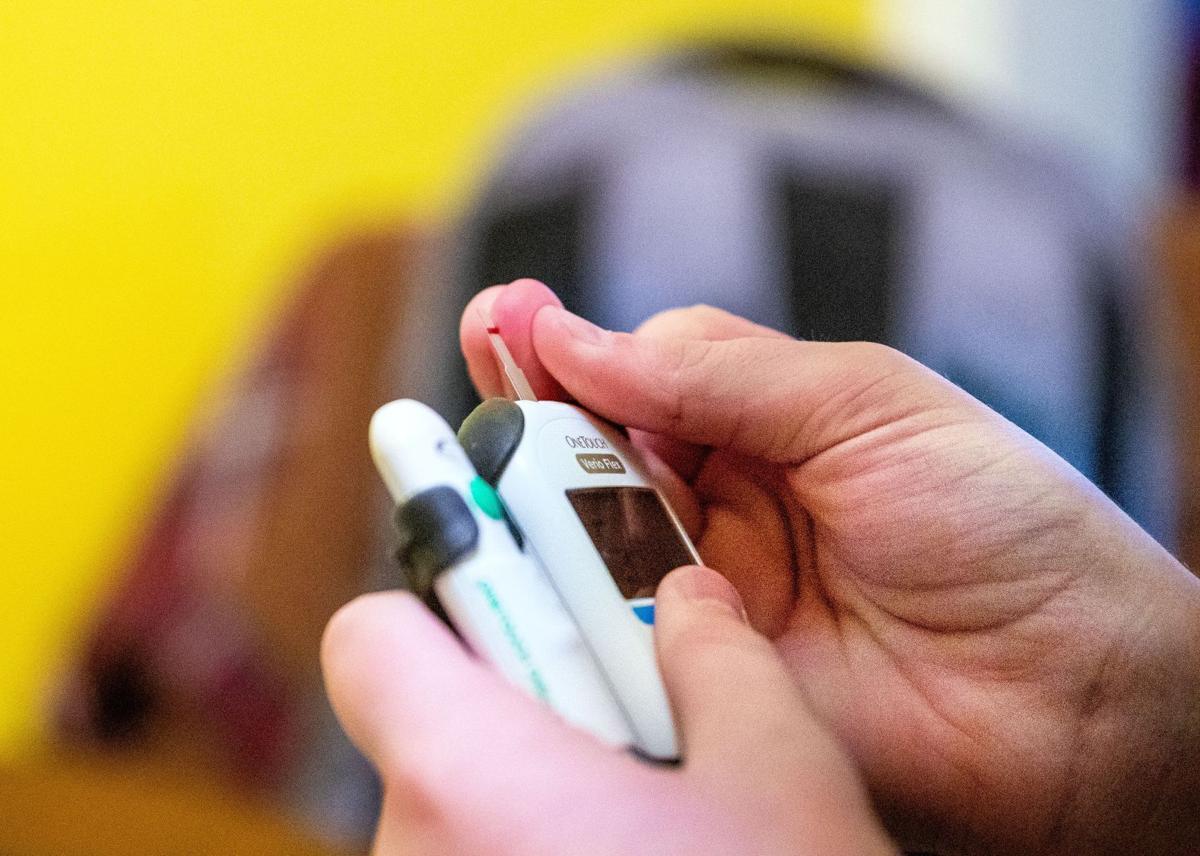 Matt Regalado, 14, pricks his finger to get a blood glucose reading after eating grapes at the family home. Regalado has been adjusting to living with Type 1 diabetes after his diagnosis in the fall of 2019.

Matt Regalado, a 14-year-old Type 1 diabetic, attaches a sensor to monitor his glucose level. The sensor sends the information to the family’s smartphones.

Insulin testing strips and other supplies that Matt Regalado, 14, uses to monitor his Type 1 diabetes. 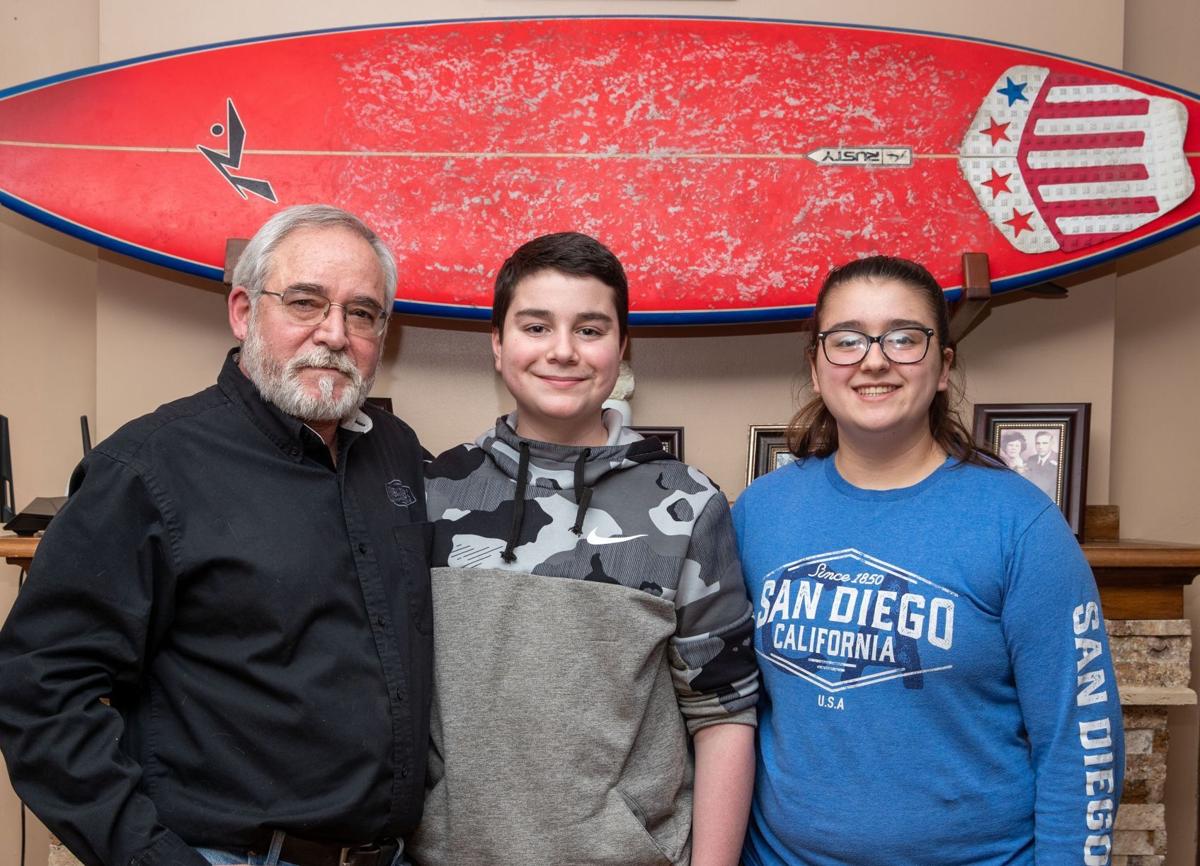 The Regalado family, from left, Rod, Matt and Addisen, stand in the family's living room. After learning of Matt's Type 1 diabetes diagnosis, the family has worked as a team to help Matt manage his blood glucose levels. 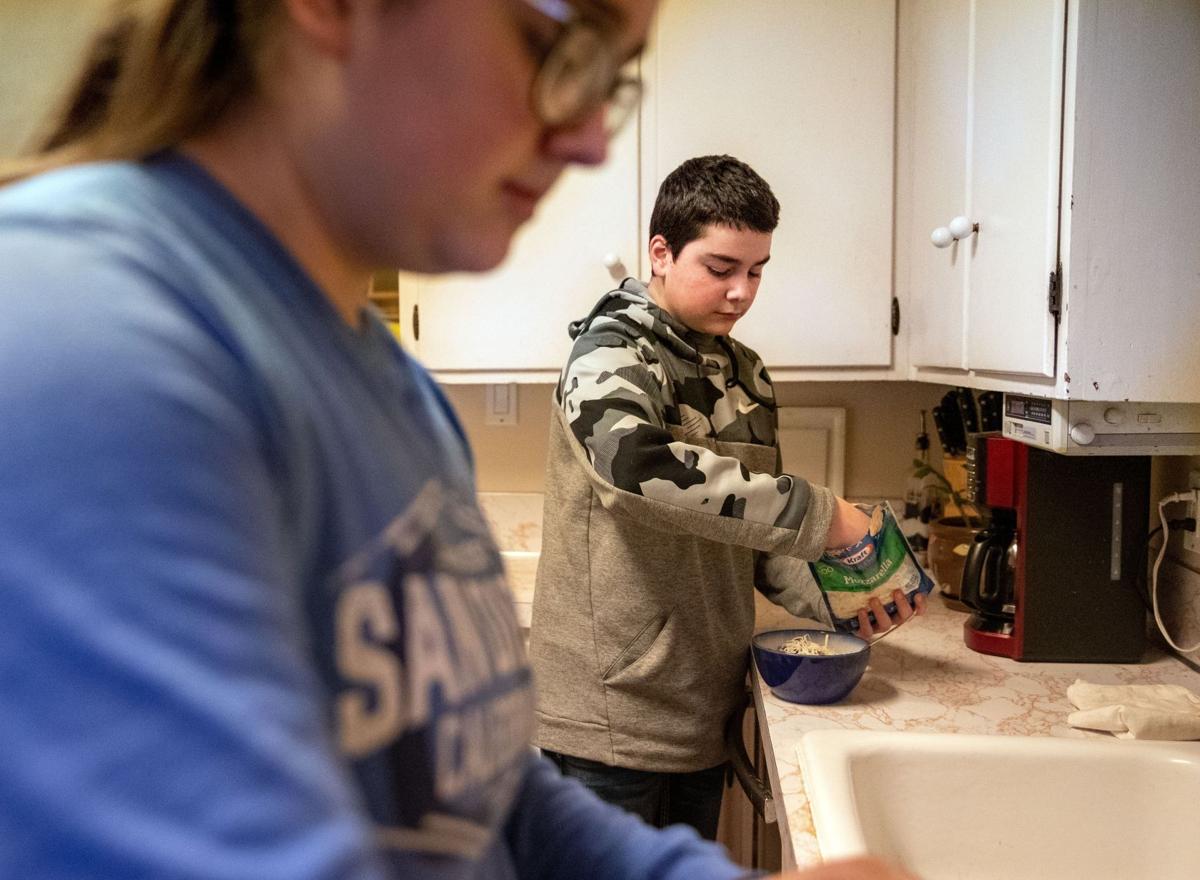 Matt Regalado, 14, and his sister Addisen prepare bowls of chili for dinner.