And she didn’t know why she felt so run-down.

A negative COVID-19 test a few days before seemingly had ruled out that illness. But the antibiotic she was taking to treat a diagnosis of pneumonia wasn’t helping.

A few days after a trip to the emergency room, Young struggled to take in a deep breath.

The 72-year-old’s family called an ambulance on a day when she barely managed to make it down a standard flight of stairs in her Treynor, Iowa, home without collapsing.

She eventually was diagnosed with and hospitalized for COVID-19, but that’s all still a blur. Young wound up at Mercy Hospital in Council Bluffs for five weeks. She spent another nine weeks recovering at two hospitals in the Omaha metro area.

Although a sometimes slow recovery has been frustrating, Young is happy to be home — especially in time for the holidays.

“I try to be thankful that I’m home and able to be around my family,” Young said. “And, of course, I’ve gotten stronger and better with my oxygen, not needing as much, so I’m back to going a lot. It’s a real blessing.”

Young doesn’t remember much of what happened before she went to the hospital. Her daughter Megan Dreyer had come over and checked her oxygen levels. They were extremely low. In addition to feeling breathless, Dreyer said, her mom had trouble focusing and finishing her sentences. The next thing Young remembers is lying in an ambulance as it pulled away from her home.

Eventually, she went into the COVID unit at Mercy. She was hooked up to oxygen during her stay. Doctors considered putting her on a ventilator multiple times, but they never did.

“It was pretty scary,” she said. “I told my husband we needed to talk about our end-of-life things because I didn’t know if I was going to make it.”

Young’s determination — and maybe a bit of a stubborn streak — worked in her favor, her daughter said.

“She decided this isn’t going to define her or slow her down,” said Dreyer, who’s 42.

Her mother’s bout with COVID was frightening, Dreyer said, in part because not much was known about treating the disease at the time.

Young had good days and bad days during her recovery.

At one point, a doctor stressed just how serious the situation was. Even if she didn’t look it, Young was very sick.

“I would leave the hospital one day thinking she’s doing pretty good and her spirits would be up. I would leave another day thinking, ‘I don’t know if I’m going to see her again,’ “ Dreyer said, choking back tears. “Anything could happen. Things seemed very up and down.”

In the weeks she spent at the Council Bluffs hospital, Young missed heaps of holiday traditions with her family: No Thanksgiving meal. No day spent swapping out fall décor with Christmas decorations. No holiday concerts starring her grandchildren and their classmates. And no leisurely Christmas celebration with a big family meal or gift exchanges.

Young was determined to be home before the next big holiday.

For the next seven weeks, she worked on regaining some of the strength she had lost while hospitalized. Staff at Select Specialty Hospital, near 75th and Cedar Streets in Omaha, helped Young reduce her use of supplemental oxygen. Then they helped her work on sitting up, standing and walking again.

When she first was admitted, Young still required the maximum amount of oxygen someone could take without being intubated, said Kristi Dada, a physician assistant with CHI Health’s pulmonary and critical care team. Because of that, she was limited in her ability to do things such as get out of bed.

After a few weeks at the hospital, Young faced a major setback — blood clots in her lungs and leg. It again made breathing more difficult.

“That was a really tough day,” Dada said. “Those can be fatal, but it was another kind of hurdle that she took head on and pushed through.”

The first time Young tried standing on her own, her legs felt like noodles. She couldn’t swing her legs over the edge of the bed to sit without help. Eventually, Young got stronger. She worked on sitting, standing and walking. Some of those achievements seem minor, Dada said, but to such patients, even taking a few steps is a big deal.

Young’s lungs never will be the same, Dada said, adding that COVID also takes a toll on the rest of the body. “We hear about patients that recover and patients that die. But we don’t hear about these patients who are in between. Those are our forgotten patients.”

In February, Young headed to the rehabilitation center at Immanuel Medical Center in Omaha to continue to work on walking and other life skills.

Over the course of her stays at the three hospitals, Young kept busy with quilting and cross-stitch projects. Knowing she had the support of family, friends and members of her church helped, too.

But her biggest priority was staying focused on going home. Anything the care team asked of Young, she did it gladly.

Young tried to keep a positive attitude and strived to work hard in therapy.

“It would have been easy to get depressed and refuse to do things and give up,” Young said. “But I love my life and I just wanted to be able to get back to what I was doing. I knew I had to do everything I could to get better.”

Young went home in early March with plenty of time to spare before the next major holiday: Easter.

For the first week, she moved into a first-floor family room in her house since she didn’t feel strong enough to tackle the staircase to the second floor and the master bedroom. Today, she has no issues navigating the house.

Young still goes to pulmonary rehabilitation three days a week. She’s still on oxygen and has yet to regain her ability to taste or smell.

During a recent session at Mercy Hospital, Young settled in for a 30-minute session on a recumbent bike, oxygen tubes tucked beneath a blue surgical mask, with her oxygen tank placed next to her.

She worked the bike, first with just her arms, then with arms and legs, followed by legs only. The whirring noise from the bike mingled with country music coming from the speakers overhead.

Young needs little to no oxygen on the bike now, although she was left a little breathless.

During the session, Gene Young sat in between two treadmills, watching his wife and chatting with other rehabbers.

The early days of his wife’s diagnosis were hard, he said. Battling his own case of COVID at home, he didn’t always know what was going on with his wife at the hospital.

As she had ups and downs and hopped from facility to facility, he wondered what life would be like when his wife was released from the hospital. Would she be on oxygen? In a wheelchair? Living in a nursing home? Now, he said, he’s amazed at the improvements she has made.

“I really kind of wondered what life would be like,” Gene Young said. “She’s made a lot of progress. I’m impressed with her spirit to get better. She’s otherwise back to her normal, usual self.”

Jan Young’s pulmonary rehab sessions will last through at least the end of December. Then she hopes to start a maintenance program at Mercy Hospital.

Young and her husband, along with their daughter and her family, will share Thanksgiving dinner at her son Jacob Young’s home. Jan’s responsible for bringing the pies. She’s thinking pumpkin, pecan and maybe chocolate this year.

Even though Young is better, this Christmas won’t feature a big dinner followed by opening presents in the Youngs’ basement family room. Instead, Young and her husband — along with the rest of the clan — will spend the holiday in California, watching their grandson graduate from Marine boot camp.

Young, who never dreamed of being able to take a cross-country trip this holiday season, has much to be thankful for this year: support from loved ones, scads of cards sent to her while she was in the hospital, advances made in treating COVID and encouragement from doctors and nurses.

“I’m so grateful to God that I’ve gotten this far,” she said, “and I’m basically doing everything I did before.”

The court order said that the federal Centers for Medicare & Medicaid Services had no clear authority from Congress to enact the vaccine mandate for providers.

Nancy Berg shares some of the best accessible businesses in Omaha — and several that need improvement — on Instagram. Her account has more than 7,000 followers. 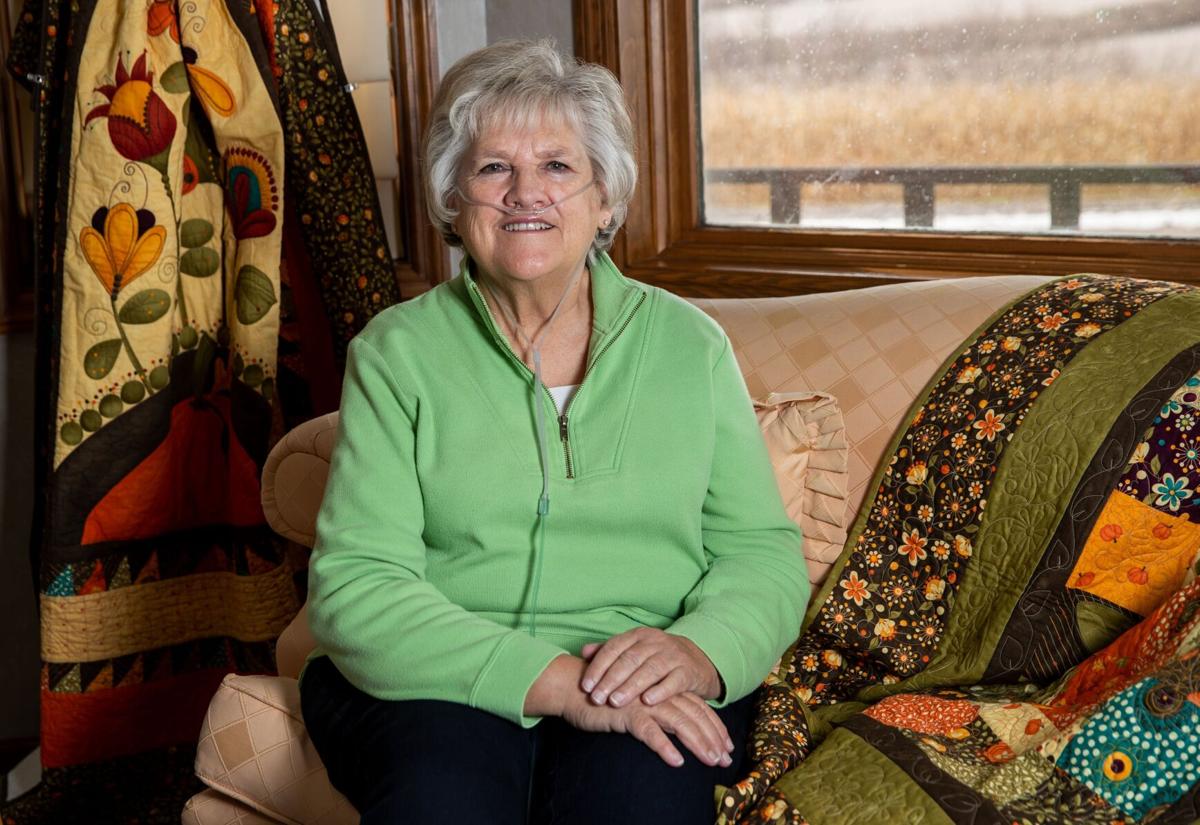 Jan Young, 72, of Treynor, Iowa, got COVID-19 last November. She spent the holidays in the hospital and is looking forward to spending the holidays with her family this year. 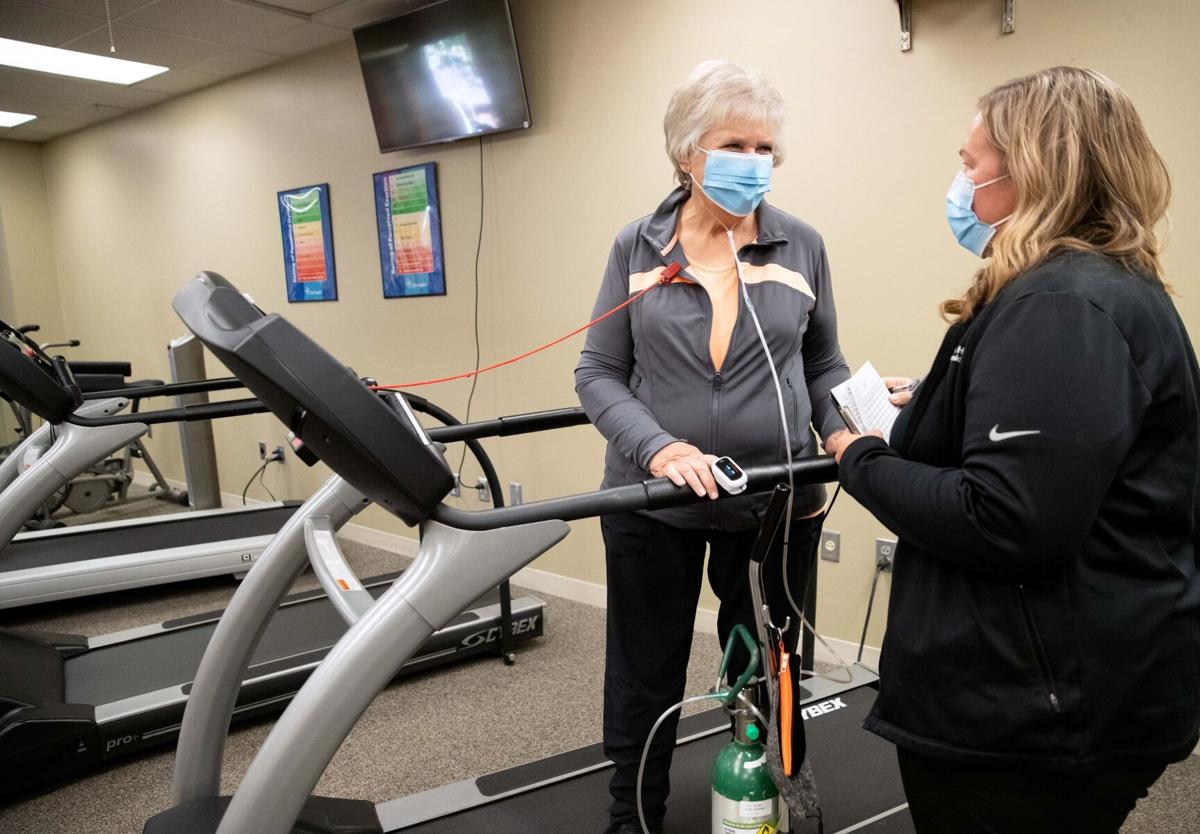 Respiratory therapist Kim Tenbensel, right, speaks with Jan Young, who has been recovering from COVID-19. Young was walking on the treadmill as part of a rehab session at Edwards Professional Center on the Mercy Hospital campus in Council Bluffs. 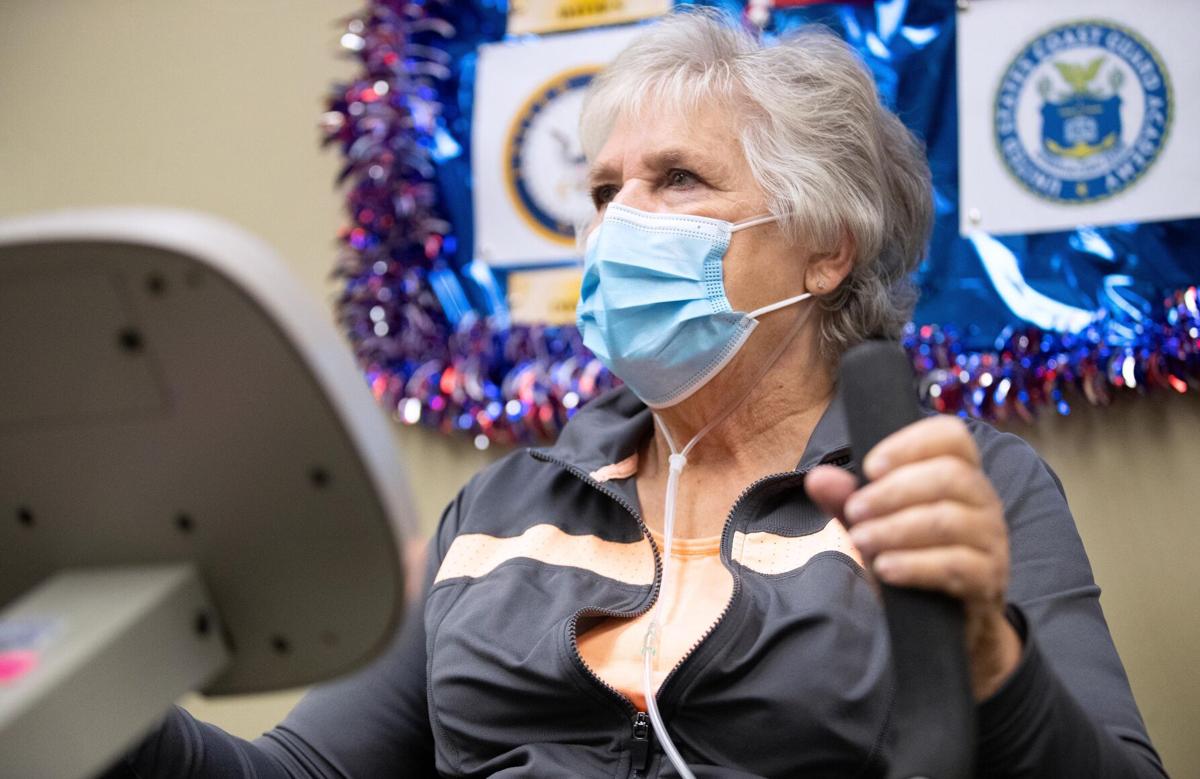 Jan Young works out on a stationary bike during her rehab appointment at Edwards Professional Center on the Mercy Hospital campus in Council Bluffs. 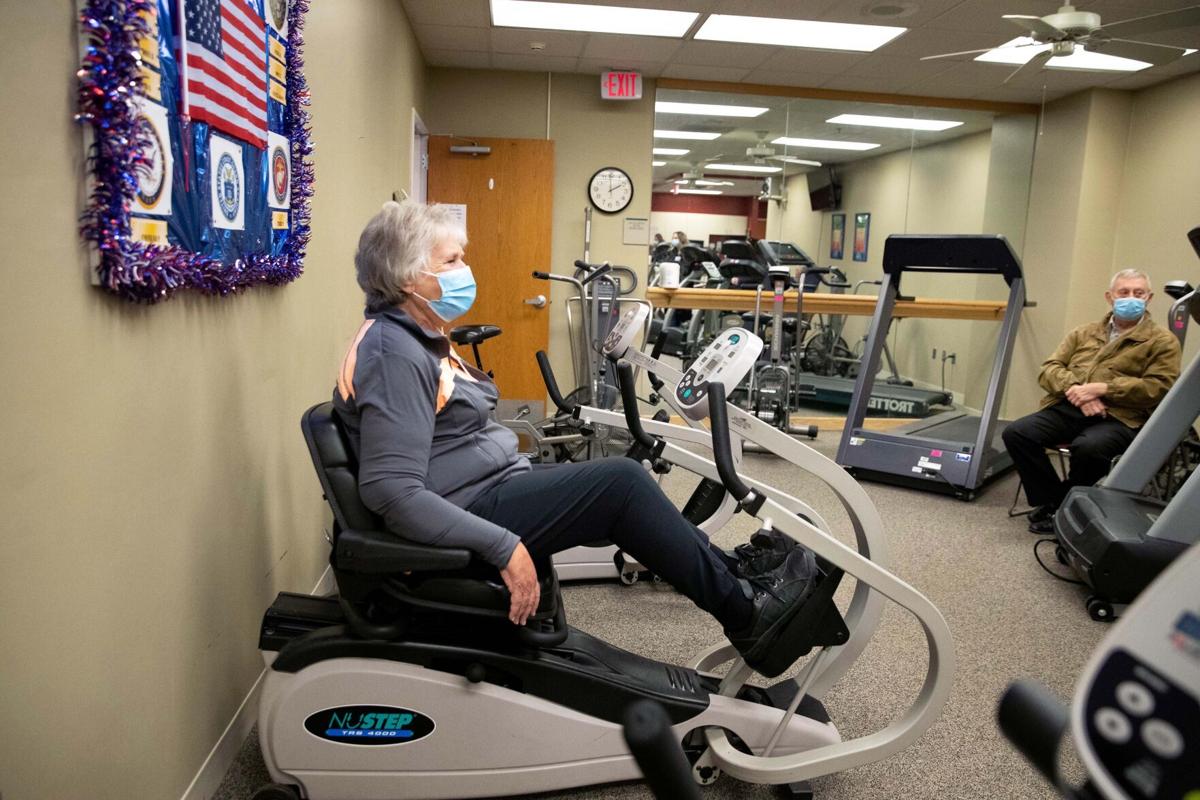 Jan Young works out on the stationary bike during a rehab appointment while her husband, Gene Young, waits for her to finish her session. 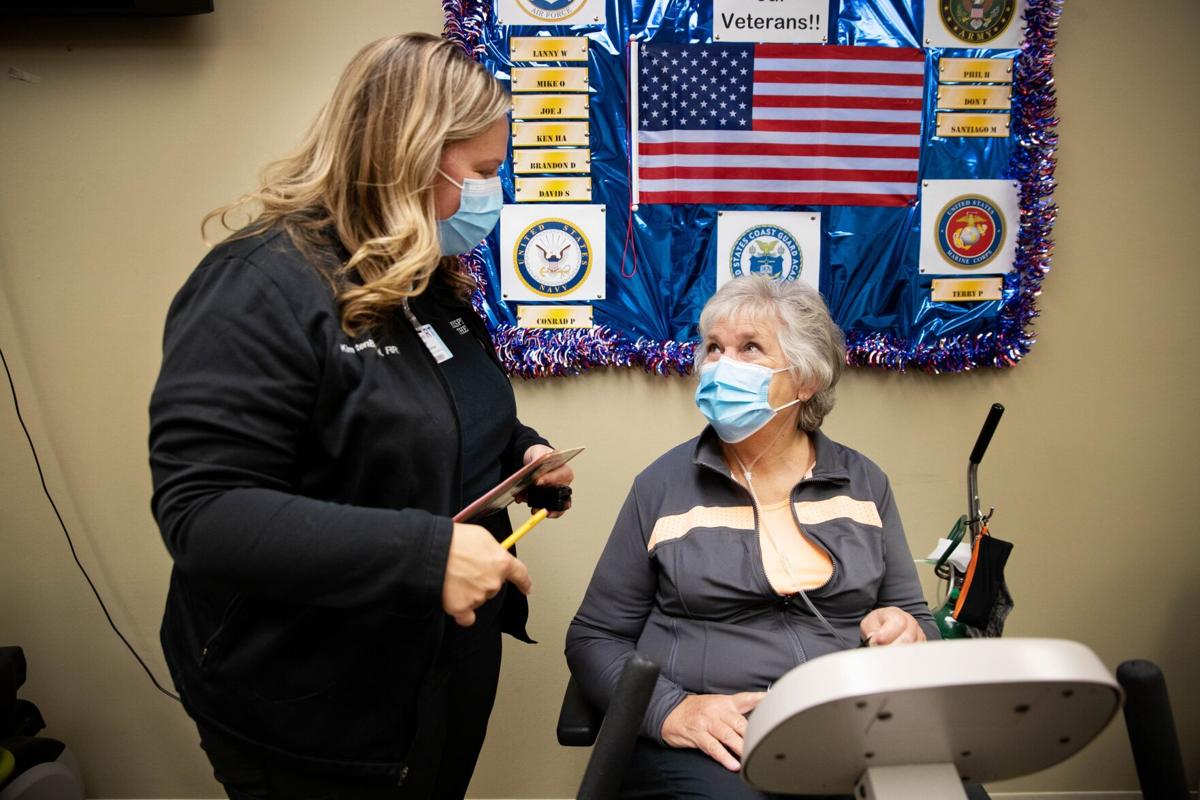