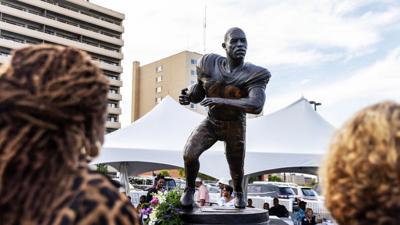 Inside Seemann Stadium, Central High’s football team prepared for the season opener. But outside in the parking lot, more than 300 family, friends, dignitaries and old fans gathered to celebrate the Eagles’ most famous 1961 graduate. To memorialize Gale Sayers.

Together, they pulled off the cover, illuminating a spectacular bronze statue of the greatest football player Nebraska ever produced — one of the best running backs in NFL history. The crowd applauded with delight and wonder, quickly pointing their cameras to the No. 48 above them.

“It’s a masterpiece,” she said.

The process began with a competition for sculptors. The Foundation eventually selected Alston, a 62-year-old Creighton professor, who boasted an impressive track record, including a 2013 Werner Park statue of another Omaha legend, Bob Gibson.

Back then, Gibson, the two-time World Series MVP, visited Alston’s studio multiple times to sit before him. Alston didn’t have the same luxury with Sayers. So he researched photography, video and books. For months, Alston constructed a collage of photos — 10 feet by 10 feet — in his Omaha studio.

A snapshot here of Gale in the hit movie, “Brian’s Song.” A picture there of Gale winning 1965 NFL Rookie of the Year. Sayers as a Kansas All-American. Sayers as an Omaha teenager rising out of poverty.

In those images, Alston sought Sayers’ spirit. His “essence.”

“I wanted to capture that speed, that energy, that strength,” Alston said.

The artist wasn’t trying to re-create a single image of Sayers; he wanted to build his own. Of Gale as a late-teenager, just before he left Omaha and exploded into the world.

Alston had help. The Sayers family played an active role in the process, generating consistent feedback. But Alston’s mind, like Gale’s feet, bounced from place to place.

The more Alston studied Galloping Gale, the more he appreciated his gifts.

Sayers' running style required not only remarkable athleticism, but stunning intellect and instincts, Alston said. On a field of 21 other imposing athletes, all moving in different directions, at varying speeds, Sayers made sense of a dynamic situation. He could see it all. He could sense where everyone was going — and elude them.

It’s “Tetris on steroids,” Alston said. And Sayers mastered it. He was unique. Original. So Alston focused on that dynamism.

The piece, Alston said, should “feel as if it’s moving.”

Motion was only part of the puzzle, though.

Roger Sayers and Gale’s daughter, Gale Lynn, shared a point of emphasis: the face. The sculpture had to convey Gale’s drive and perseverance.

“We tweaked the eyes,” said Gale Lynn. “The intensity. On the field, he knew where he was going. You could see it in his eyes.”

One day, Alston had a creative breakthrough when Ardie Sayers mailed him an old family photograph.

“Standing in front of my wall, I put that portrait in there and it filled out the mosaic,” Alston said. “And it hit me: this is it. And all the other parts came together.”

This March, Roger Sayers and Gale Lynn walked into Alston’s studio and, for the first time, saw the statue complete. Immediately Roger broke down in tears. His favorite part? The determination in Gale’s face.

What age and dementia stole from them, the statue restored.

“It brings him back to life,” Gale Lynn said. “That is my father, who I remember. Not who he was in his latter days.

“I wish he were here to see it. This would make him very proud.”

To Alston, the project was always personal. He grew up in Washington, D.C., an African-American neighborhood where Sayers was revered.

“It’s like a Jackie Robinson in our lives,” Alston said. “And we need those heroes. Kids who have nothing need something to hold onto. To look forward to. To see as an example. And Gale was that.”

Alston considers sculpting Black athletes part of his calling as an artist. “Think about it,” he said. “The African-American athlete is the bronze sculpture. Literally and figuratively.”

Over the past six decades, the evolution of sports and race illustrates a great deal about America — and Omaha. Good and bad.

It’s not the only thing that’s changed since 1961. Look at technology. The way we share stories. The way we document history.

Imagine how the methods might change further over the next 60 years. Or 600.

It’s impossible to predict how students will consume information. But bronze statues, like Gale galloping down the sideline, tend to elude the boundaries of time. And the statue’s location outside Central High enhances its symbolism.

“Kids are going to walk past this forever,” Gale Lynn said.

Some will know the story and gain inspiration from it. Others will respond with wide-eyed curiosity and wonder. Who was this man? What made him so special?

Photos: Gale Sayers through the years

The North Omaha Airport is poised to undergo a host of renovation projects that officials say would increase air traffic at the site and draw visitors to the city.

Stu Pospisil: Omaha was once a kingpin in the bowling world

When bowling was at its zenith in Omaha, there was one lane for every 654 persons. Nearly 500 lanes at 25 establishments.

Some Nebraska teaching jobs are left vacant or filled with less-qualified candidates, a survey from the state's Department of Education says. The number of reported unfilled teaching jobs across the state is up nearly 60% over last year.

Omaha police are investigating the death of a woman found outside Sunday morning near 28th and T Streets. 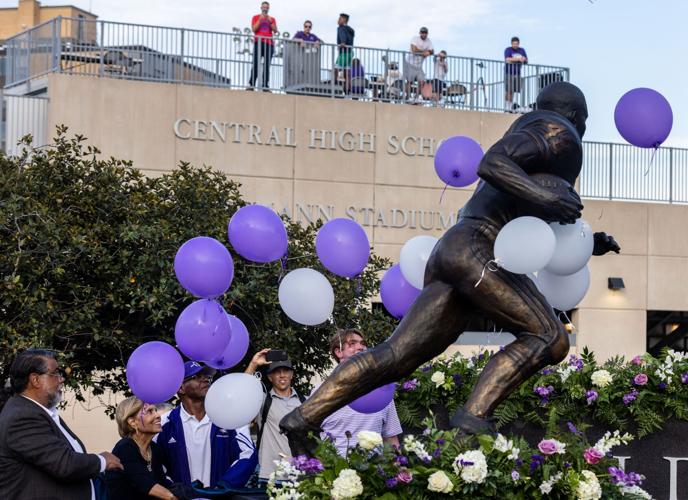 Littleton Alston, far left, and Roger Sayers, third from left watch as the tarp is pulled off of a statue of Roger's brother Gale Sayers at Central High SchoolÕs Seemann Stadium on Friday. The sculpture was made by Littleton Alston. 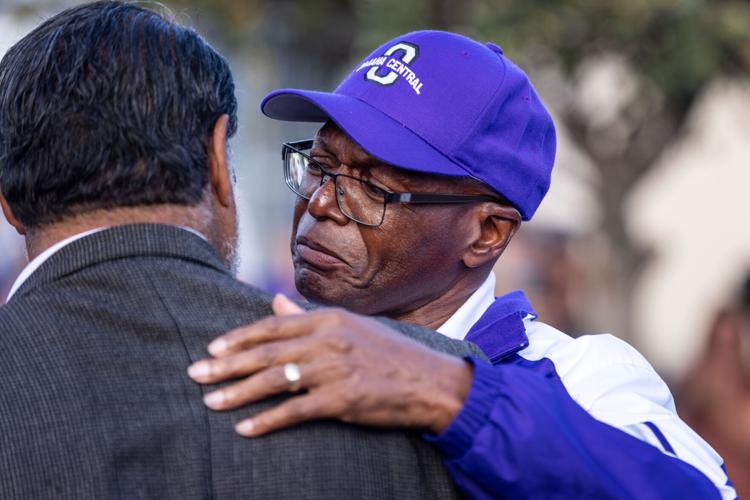 Roger Sayers, right, hugs sculptor Littleton Alston after Alston gave him a maquette of the statue of Roger's brother, Gale Sayers before he unvieled the full size statue outside of Central High SchoolÕs Seemann Stadium on Friday. 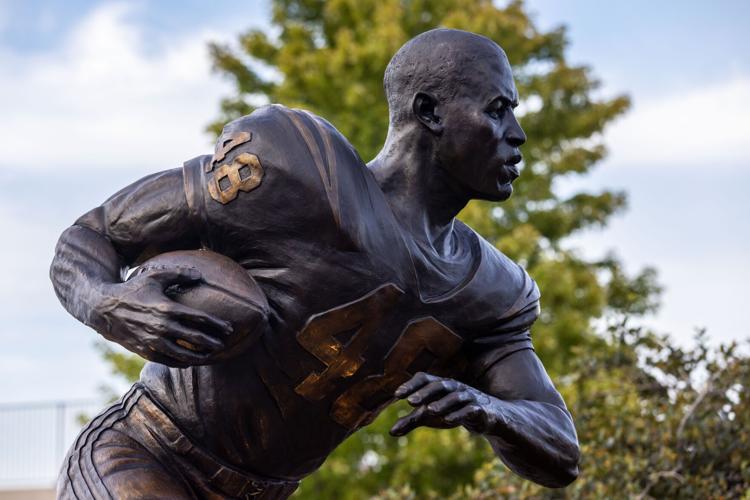 The newly unveiled Gale Sayers Memorial Statue at Omaha Central High SchoolÕs Seemann Stadium on Friday. The sculpture was made by Littleton Alston. 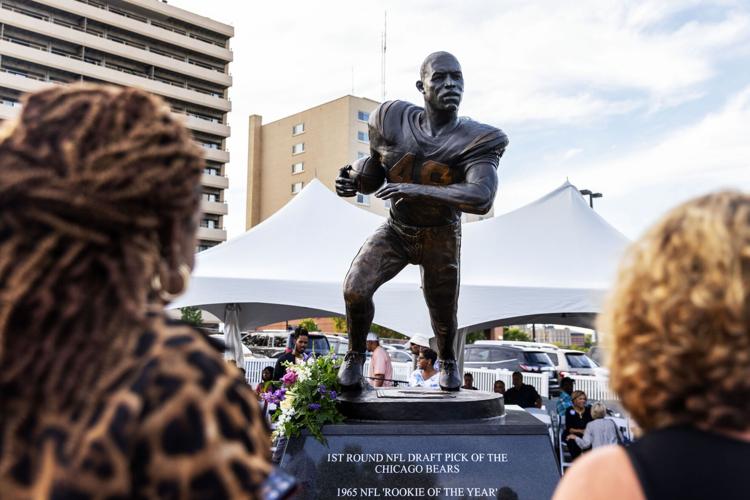 People admire the newly unveiled statue of Gale Sayers outside of Omaha Central High SchoolÕs Seemann Stadium on Friday. The sculpture was made by Littleton Alston.