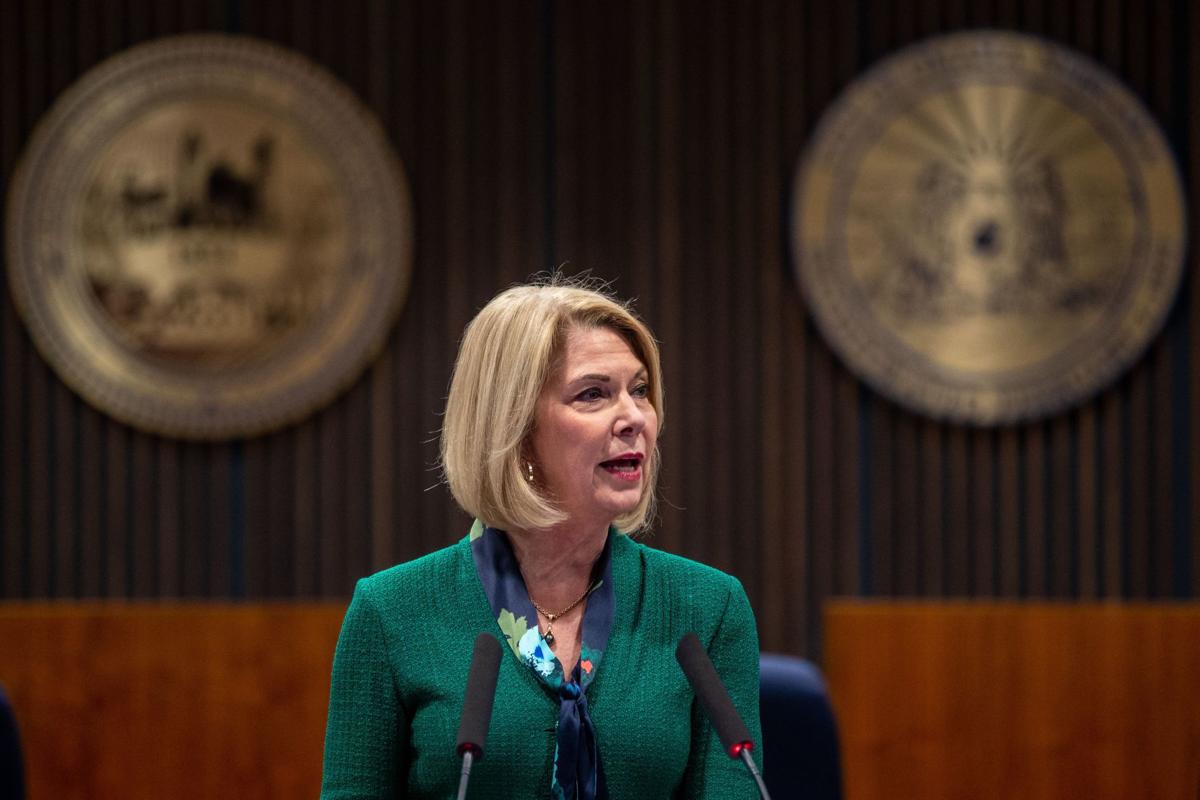 Mayor Jean Stothert delivers her State of the City address on Friday. She spoke about bike lanes, scooters and a $200 million streets bond. 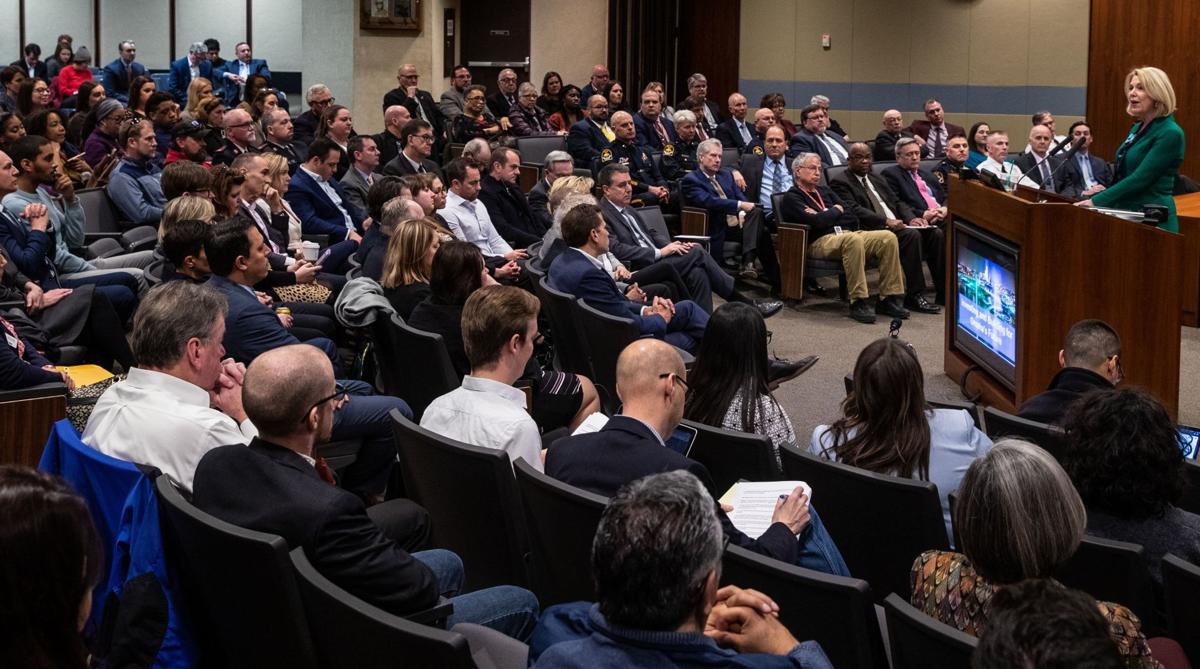 Omaha Mayor Jean Stothert gives her annual State of the City address in the City Council chambers on Friday. 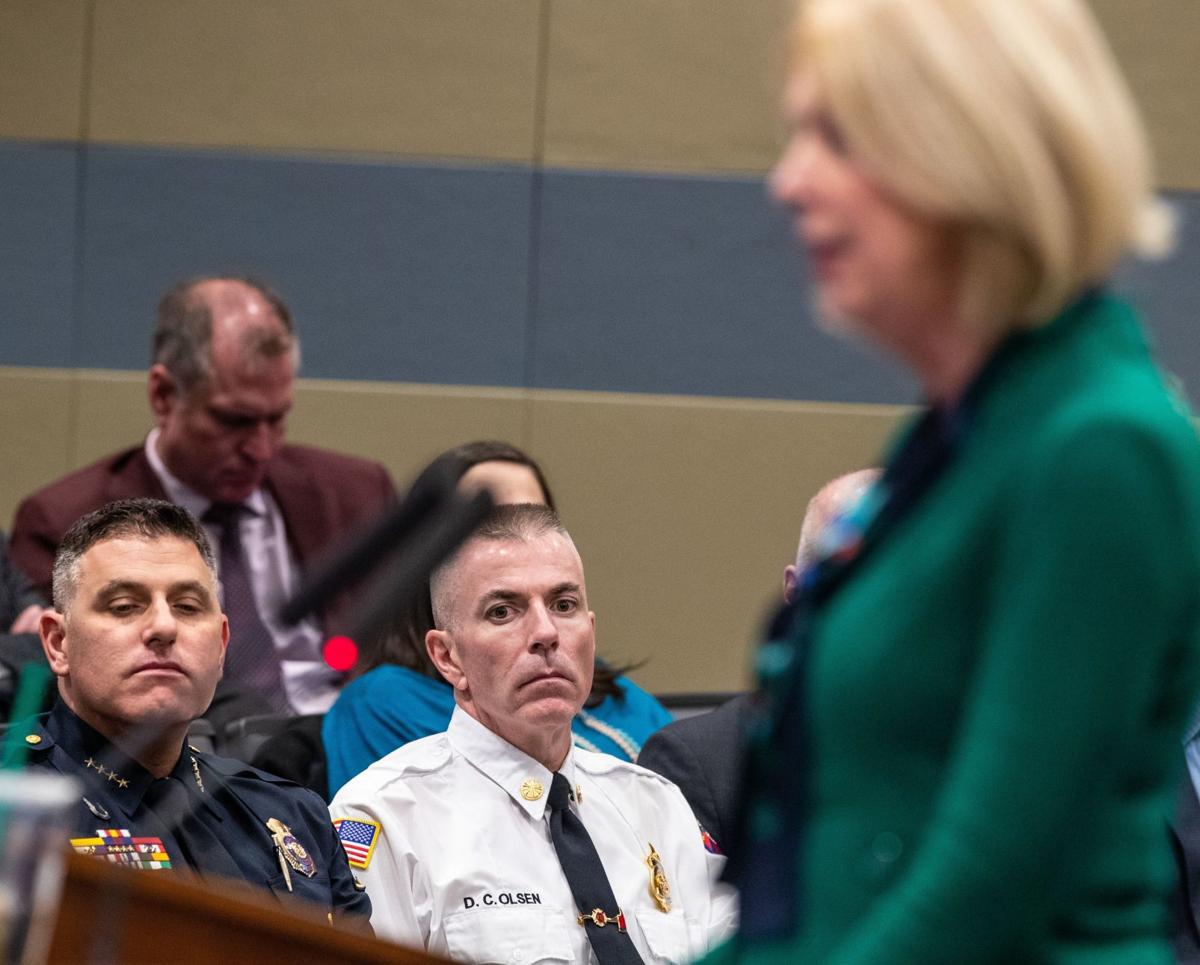 Omaha continues to move in the right direction, and that growth comes down to one important word, Mayor Jean Stothert said in her seventh State of the City speech Friday: “investment.”

The city is making investments in job programs, housing and public safety, she said. The private sector is investing in a slate of new developments, such as the 500-acre, mixed-use Heartwood Preserve southwest of 144th Street and West Dodge Road.

The public plays a role, too, Stothert said. She’s counting on voters to approve a $200 million bond issue to rehabilitate and maintain Omaha’s roads.

“Omaha is a thriving city with an exciting future,” she said.

Read on for highlights of Stothert’s speech.

Investment in North and South Omaha

Stothert highlighted a number of programs focused on housing, jobs and young people in North and South Omaha.

She said she will ask the City Council to contribute $25,000 to an internship program for Hispanic students launched by the Latino Center of the Midlands.

The city money would go toward expanding the program to offer jobs, training and mentoring for young people ages 16 to 19.

Stothert also celebrated a $25 million federal grant that will help demolish the worn-out Spencer Homes public housing apartments, replace them with better housing and rejuvenate a nearby stretch of North 30th Street.

“Omaha has the will, the commitment and the resources to invest these (grants) wisely, and become an example for other communities ready to reinvest in older neighborhoods,” Stothert said.

This fall, the city will break ground on a new fire station near 34th and Q Streets.

In September, the Omaha Police Department opened a precinct in the Elkhorn area with goals of lowering response times for high-priority calls and reducing the call volume at other precincts.

Stothert said the city has added police officers and that response times are improving. Over the past four years, the homicide rate has fallen to a 30-year low. Incidents of police use of force are down.

“Omaha is as safe today as it has been in many, many years,” Stothert said.

Stothert’s speech outlined initiatives that could change how Omahans move around the city.

There’s no guarantee that a fleet of electric scooters will return to Omaha this year, but if they do, Stothert said, safety will be a key consideration. She said she will bring an ordinance to the City Council this spring to regulate the scooters.

And Stothert reiterated that a $200 million bond issue is necessary to establish a long-term plan to fix Omaha’s streets.

If voters approve the measure, which will appear on the May 12 ballot, the city will be able to close the gap on a $34 million annual street repair shortfall, officials have said.

Property taxes would rise by about $26 for every $100,000 of valuation. Stothert said keeping taxes as low as possible is important to her, but so is providing quality services to taxpayers.

A series of town hall meetings will be held this spring to answer questions about the bond issue.

The “ripple effect” of private investment and a strong local economy benefit all Omahans, Stothert said.

Among the statistics she underscored: Employment growth is up by more than 3% compared with a year ago. The unemployment rate in Omaha sits at 2.8%. Average hourly wages have risen by more than $1 since December 2018.

The mayor referenced a World-Herald story calling the city a “boomtown.”

A group of philanthropists may be willing to pay to relocate or renovate Omaha's 12 existing libraries. They're also on the hunt for a new location for a southwest Omaha branch.

'We did it, baby!': South Omaha skateboarders will ride once again in Lynch Park

The temporary equipment at Lynch Park could be installed within a month or so, Mayor Jean Stothert said at a press conference. Details on a permanent park will be worked out in the coming weeks.

More than a dozen business owners, civic leaders and government employees spoke in support of the bond during a public hearing before the Omaha City Council. No one opposed it.

City will give $75,000 in grants to Omaha neighborhood associations this year

Neighborhood associations in Omaha can apply for city grants of up to $5,000 for projects that "strengthen the quality of life, impact the neighborhood environment and help prevent crime," the City of Omaha announced Monday.

Lawyers for the city were in court Wednesday to try to persuade a judge to overturn an arbitrator's decision that effectively reduced the city's firing of Steve LeClair, Omaha's fire union president, to a five-day suspension.

Olympic Swim Trials get $1.3 million in public funds, a big increase from 2016

Omaha has hosted the Olympic qualifying event every four years since 2008. This time, the Omaha Sports Commission found some donors less willing to give for the 2020 Trials. Less money from donors meant taxpayers were asked to shoulder more.

Omaha reaches tentative $2 million deal on recycling for next year; 2021 still up in air

Firstar Fiber has argued that it's losing money on the city recycling contract, which runs through 2020. It was signed before international markets for recycling crashed.

The bike lanes would be the Bluejay Bikeway on Burt Street from 16th to 24th Streets and the Market to Midtown Bikeway on Harney Street from 10th Street to Turner Boulevard.

Scooters wouldn’t be allowed on sidewalks, and riders wouldn’t be able to take them on streets with speed limits greater than 35 mph, per the rules of a proposed ordinance.

Rules on Omaha scooters are set, but they won't appear on city streets just yet

Riders who violate one of the proposed rules could face a $100 fine. But the scooters aren't coming to Omaha streets just yet.

Councilman Ben Gray does a 180. Now electric scooters could return to Omaha

After one councilman does a 180, electric scooters are back on the table in Omaha.

Mayor Jean Stothert delivers her State of the City address on Friday. She spoke about bike lanes, scooters and a $200 million streets bond.

Omaha Mayor Jean Stothert gives her annual State of the City address in the City Council chambers on Friday.