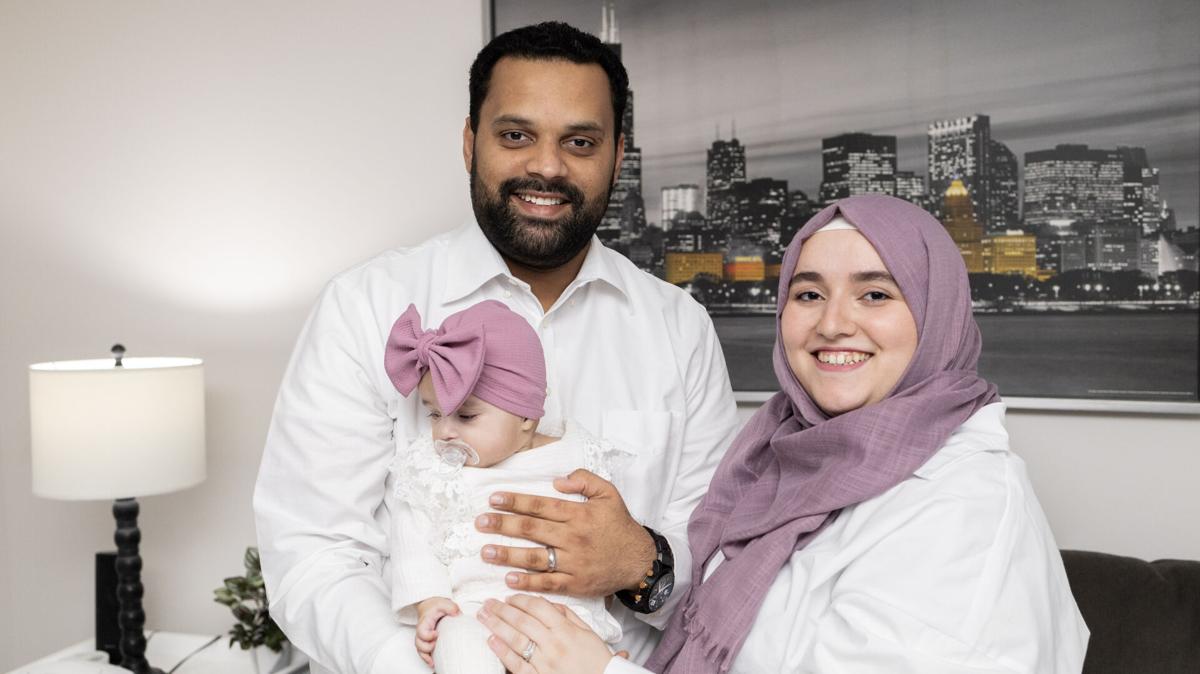 Ebrahim Abdulsattar and his wife, Lubna al-Sebaie, in their Lincoln home with their daughter, Layal. He grew up in war-torn Yemen, came to America as a teen and now works at a financial services company. 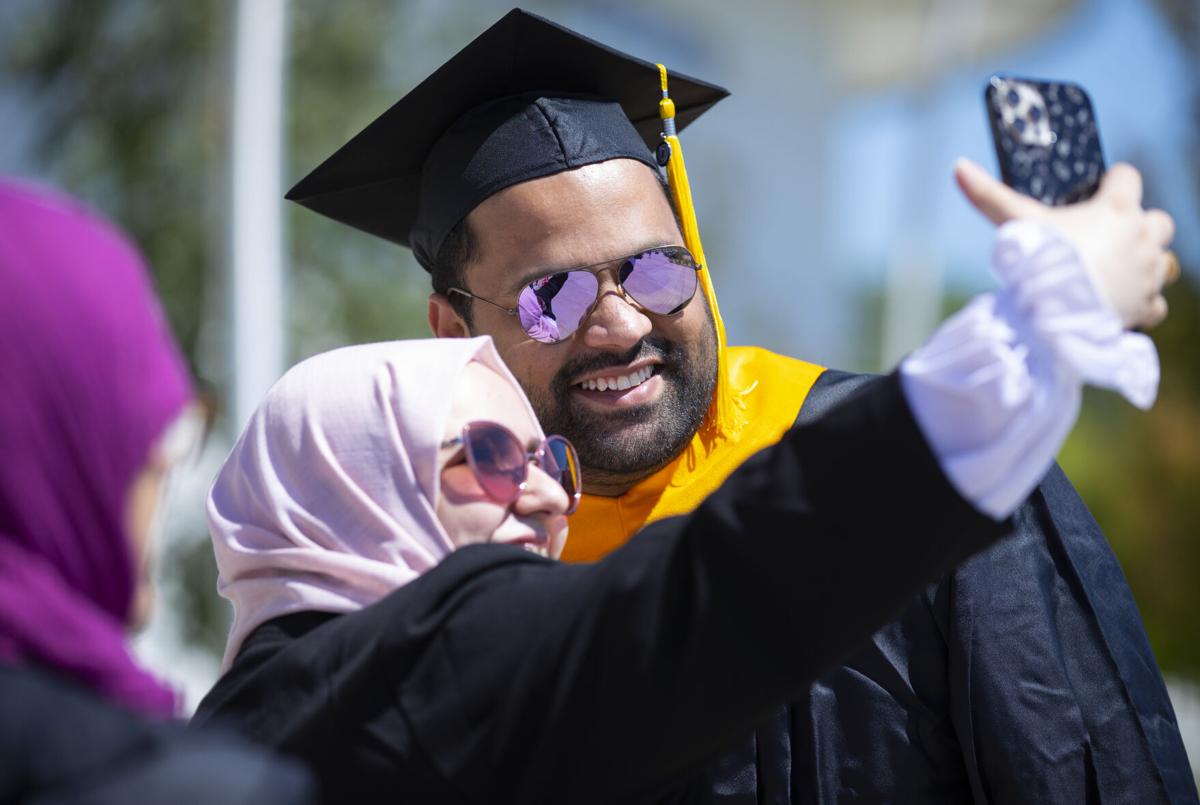 Ebrahim takes a selfie with his wife after commencement in August. He has earned bachelor’s and master’s degrees at UNO. 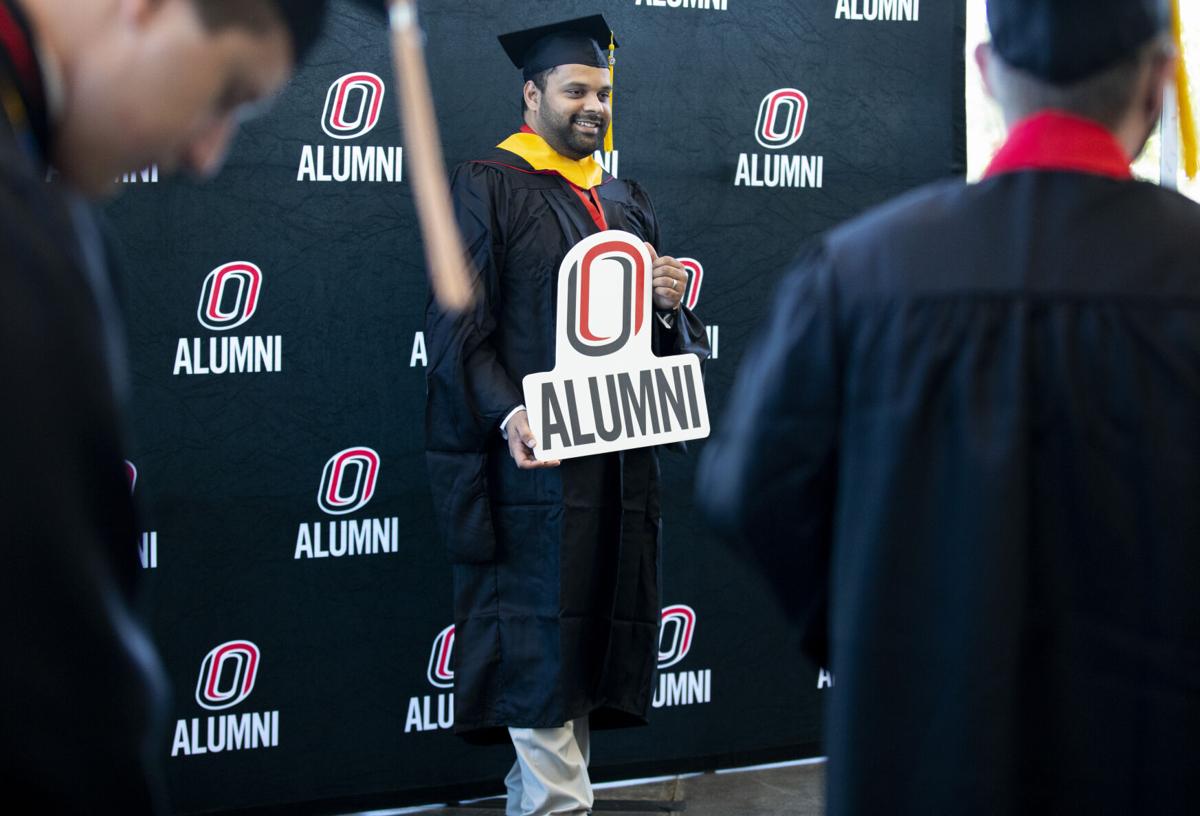 Ebrahim Abdulsattar poses with props before his commencement ceremony in August. He earned his master's degree last year, but COVID-10 canceled in-person commencement. 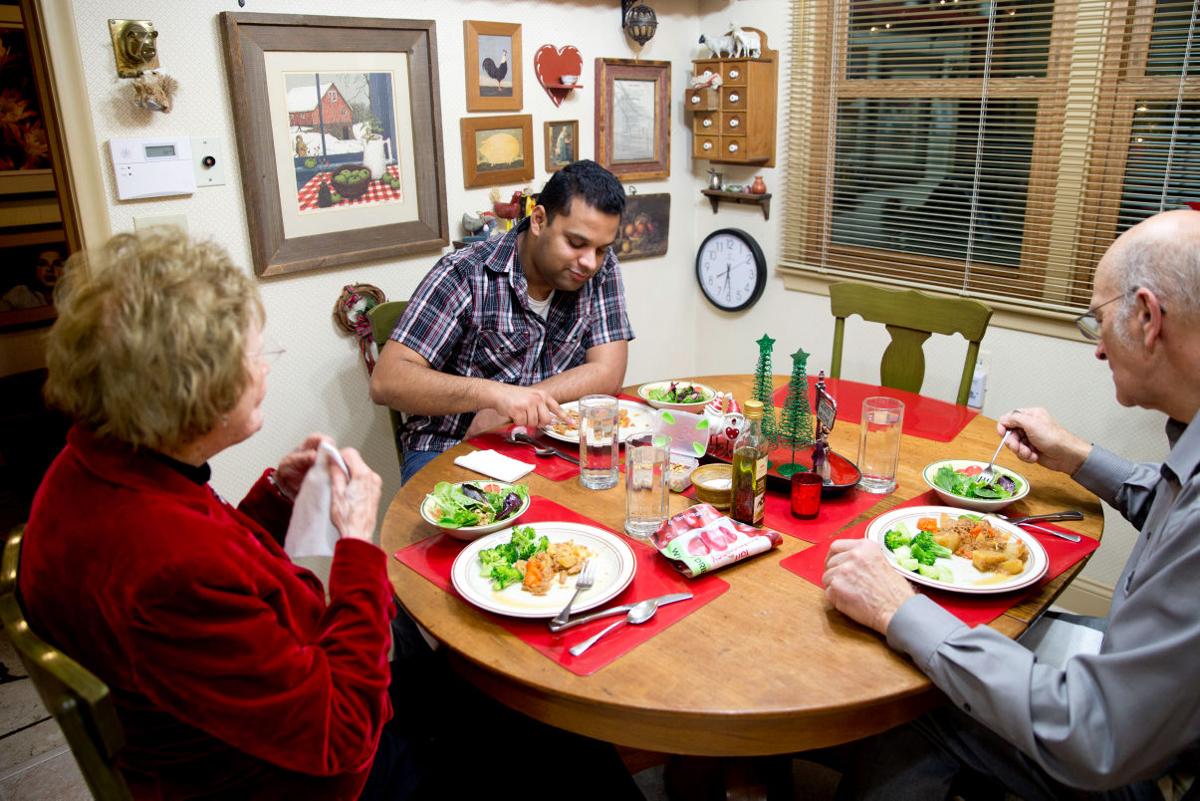 From left, Ila Dean Horn, Ebrahim Abdulsattar and Frank Frerich eat dinner in December 2015 at their home in Omaha. Horn and Frerich took in Abdulsattar when he was a student at Westside High School. 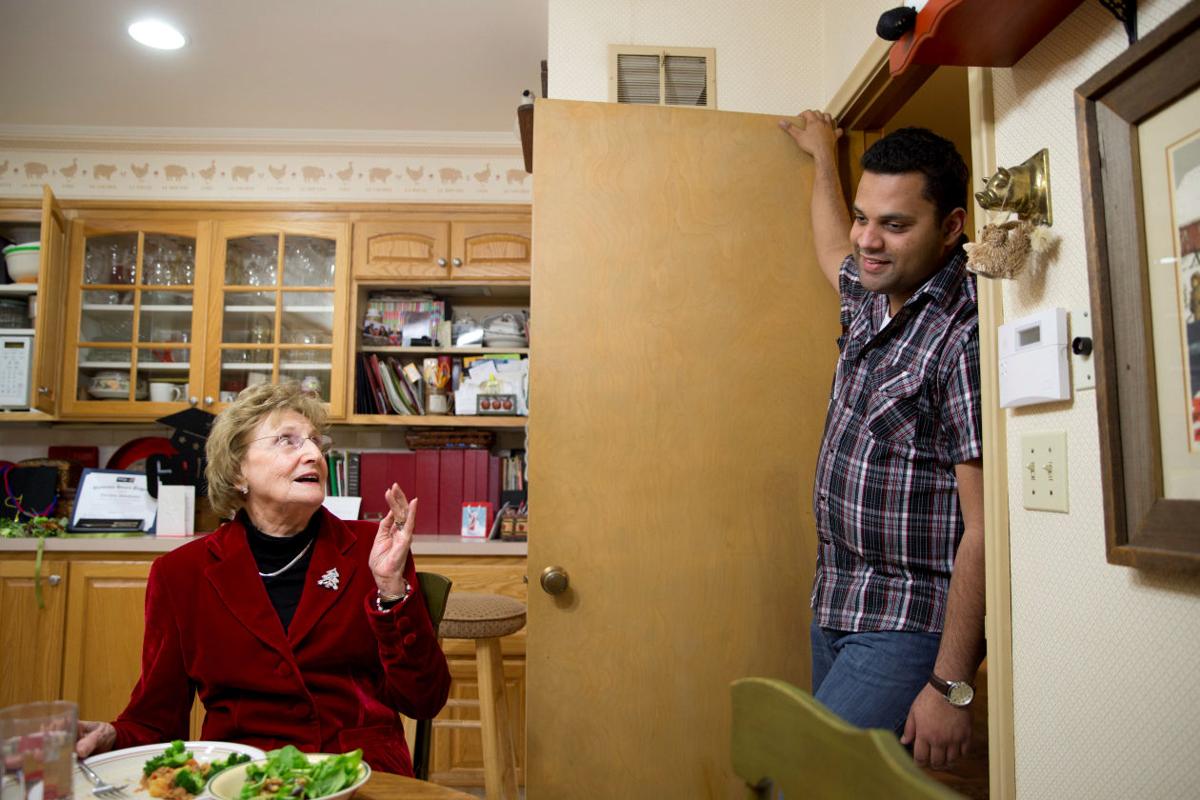 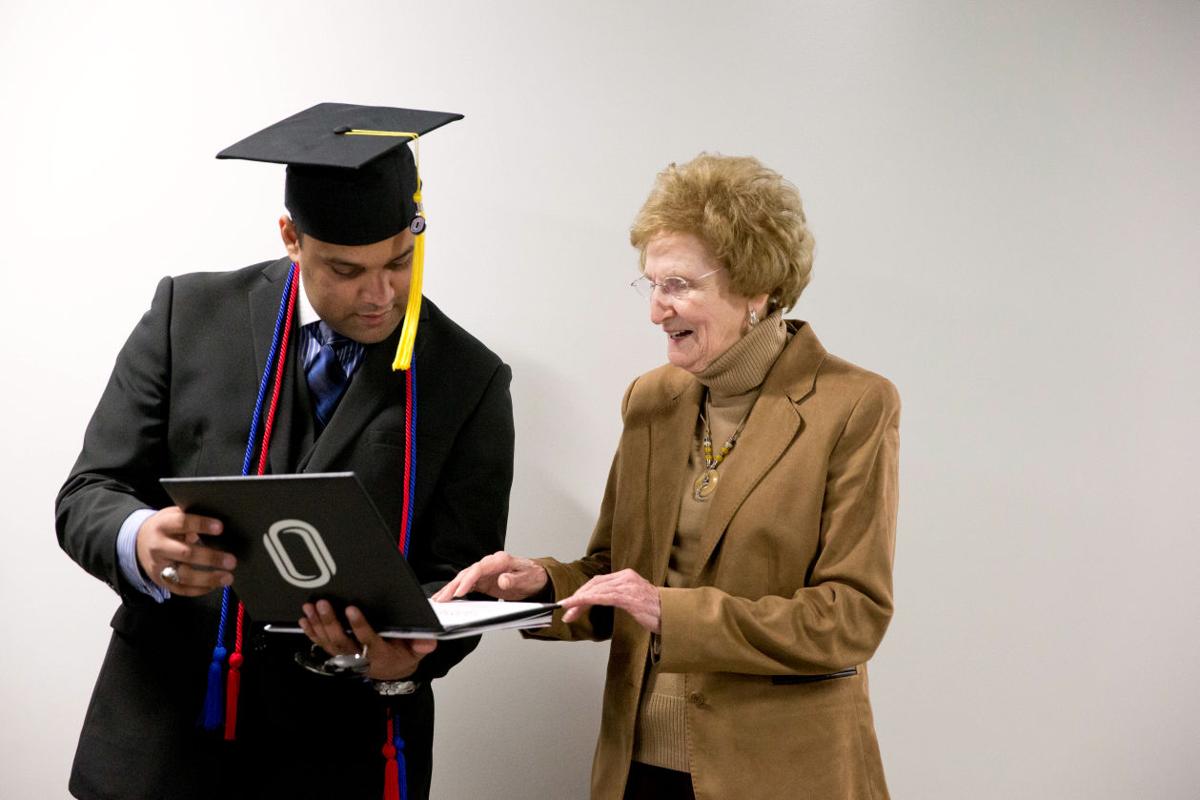 Ebrahim shows his University of Nebraska at Omaha diploma to Ila Dean Horn in December 2015.

It is a storybook summer night in Omaha, and Ebrahim Abdulsattar is sitting under a pink-striped sky in Aksarben, eating a chocolate crepe and considering his happy fortune.

He is married to Lubna al-Sebaie, a woman who shares his Muslim faith, intellectual curiosity, and zest for road trips. They are new parents to infant Layal, whose cherubic face fills Ebrahim’s phone roll as he thumbs through, beaming. The 29-year-old has a good job at a financial services company, a side gig in tech consulting and a green card — a path to citizenship in the United States.

Ebrahim is, by any number of measures, living the American Dream. Life, he says, is pretty good.

As Nebraska prepares to receive some 1,400 people from other countries, including 775 evacuees from Afghanistan, let’s take a moment to understand what put Ebrahim, born and raised in Yemen, under that pink Omaha sky. What makes him confident in the present and secure in the future, knowing that Nebraska “is now home.”

The story of Ebrahim’s dream first presented itself in 2016, when I wrote an Omaha World-Herald column about his college graduation. Retirees Ila Dean Horn and partner Frank Frerich first welcomed Ebrahim in 2009 for a year of high school. Then they housed and supported him as he navigated college at the University of Nebraska at Omaha. Ebrahim worked hard, got involved and got his degree.

Five years later, I came across this Chapter Two at a sports bar in a west Omaha strip mall, where Kiwanis Club members had gathered on a hot July day to hear a lunchtime speaker. I was there because the speaker was the director of the National Counterterrorism Innovation, Technology and Education Center, the UNO-based research hub where I now work.

Afterward, Frerich, now 81, approached. Did I remember Ebrahim? Was I interested in hearing more about his story?

Ebrahim grew up in Yemen, a country at the tip of the Arabian Peninsula. In the past decade, the country has been torn apart by civil war and near-famine. The U.S. State Department’s recommendation on travel to Yemen boils down to this: Nope.

“Do not travel to Yemen due to COVID-19, terrorism, civil unrest, health risks, kidnapping, armed conflict, and landmines,” the State Department’s website says.

Ebrahim was born in 1992. He was almost 9 years old when the terrorist attacks of Sept. 11 happened. He was nearly 17 when he traveled almost 8,000 miles to Westside High School, part of a post-9/11 program to introduce America to bright students from majority-Muslim countries.

His engineer father and teacher mother valued education, so much so that this month, Ebrahim’s mother will receive her doctorate in education despite war and humanitarian disaster.

But the kindness of strangers turned things around. Horn and Frerich invited him to live in their house. They went to his parent-teacher conferences. They taught him to drive. They pushed him to get involved, and Ebrahim did. He joined the band, learned to bowl, rode a horse and made friends.

When Ebrahim finished his junior year in spring 2010, he returned to Yemen. From Omaha, Horn watched news coverage of the Arab Spring uprising and got worried. She emailed Ebrahim and asked if he could come back. She worked the phones, calling UNO and the U.S. Embassy. She sent Ebrahim money and instructions for a visa.

In 2012, Ebrahim did come back. He enrolled at UNO, joined the honors program, won grants and scholarships and got a part-time job.

Just as he did at Westside, Ebrahim got involved. He headed UNO’s Muslim Student Association. He volunteered for nonprofits that needed IT help.

The three refugee resettlement agencies in Nebraska have initially committed to resettling 655 Afghan evacuees in Omaha and Lincoln. They stress that the number is fluid and likely to grow.

He graduated in December 2015 with his bachelor’s plus certificates in data management and systems development. That’s the heartwarming success story that I wrote about in January 2016.

A year later, President Donald Trump took office. One of his first presidential acts was halting people from some majority-Muslim countries from coming to the U.S. The “Muslim ban,” as it was called, was challenged in court, reworked, challenged again in court, and then ultimately took effect.

It kept Ebrahim from returning to Yemen to see his family. He didn’t want to risk leaving the U.S. (On Inauguration Day this year, President Joe Biden reversed the ban.)

Seven Afghanistan evacuees, including a US citizen, arrive in Omaha

Ebrahim, who has spent one-third of his life in Nebraska, knows that Islamophobia exists, that hate crimes are on the rise and that Muslims, particularly hijab-wearing women like his wife, can face discrimination. He knows that when newcomers from war-torn places land in Omaha, they experience grief and anger and acceptance. He knows they need help. He also knows they can make it.

Ebrahim was eager to share these views the evening we met under one of the colorful umbrellas in the Aksarben business district’s picnic area.

He rattled off the good things happening for him. He was excited about his August UNO commencement ceremony. He’d earned his master’s degree in management information systems the year before, when COVID-19 meant no in-person ceremony. Now he was going to don the black robe and walk.

He talked about Lubna. Denied the dream to study architecture in her native Syria, Lubna had spent years as a refugee in Egypt, where becoming an architect seemed absurd. Now she’s a junior at the University of Nebraska-Lincoln.

They constantly remind themselves how far they have come.

Nebraska ready to aid Afghan refugees, but it could be a lengthy process

In Ebrahim’s eye, America is a place that, despite its challenges and fierce disagreements, can still welcome the stranger.

Life is not perfect. He hasn’t seen his parents and siblings in nine years. He’s not sure when he will be able to return to Yemen.

But Ebrahim considers himself lucky, not just for finding love, starting a family and being somewhere safe. In planting Nebraska roots, he believes he is on the right path.

“Life is good so far,” he declares.

Editorial: Nebraska should continue its tradition of welcome to refugees

His success is sweet affirmation to Horn, now 91, who had to defend taking in a Yemeni teenager to Omaha friends.

The great-grandmother had her reasons. She’s known hardship. She wanted her family to know someone of a different culture. She felt called.

“This is what I needed to do, and I’m glad I did,” she said recently.

She credited Ebrahim for charting a successful course.

“He took advantage of every opportunity. He was always so good and really nice about everything,” she said. “It could not have worked out better.”

Ebrahim’s experience holds promise not just for newcomers — both Afghans and others — who are en route, but for the rest of us.

His story, one that came amid stories of distress and failure, is a reminder that our national fabric is more resilient than perhaps we know.

Sitting under that shared sky, I heard my story, our collective story as Americans, told to me by a young man who still believes in the American dream — and believes he’s living it.

Amanda Kohler said she is leaving the nonprofit for a position in the career field she was in before becoming the center's director on what was supposed to be an interim basis in 2019.

About 500 Afghan refugees have arrived in Nebraska; resettlement agencies swamped

Finding housing is proving to be a challenge. While many people have been placed in apartments or rental houses, some are staying in such temporary lodging as Airbnbs and extended-stay hotels for now.

More than 40 Afghan evacuee students have enrolled at Omaha Public Schools and a few are settling in some neighboring districts. Omaha-area schools will receive hundreds more in the coming months.

Ebrahim Abdulsattar and his wife, Lubna al-Sebaie, in their Lincoln home with their daughter, Layal. He grew up in war-torn Yemen, came to America as a teen and now works at a financial services company.

Ebrahim takes a selfie with his wife after commencement in August. He has earned bachelor’s and master’s degrees at UNO.

Ebrahim Abdulsattar poses with props before his commencement ceremony in August. He earned his master's degree last year, but COVID-10 canceled in-person commencement.

From left, Ila Dean Horn, Ebrahim Abdulsattar and Frank Frerich eat dinner in December 2015 at their home in Omaha. Horn and Frerich took in Abdulsattar when he was a student at Westside High School.

Ebrahim shows his University of Nebraska at Omaha diploma to Ila Dean Horn in December 2015.