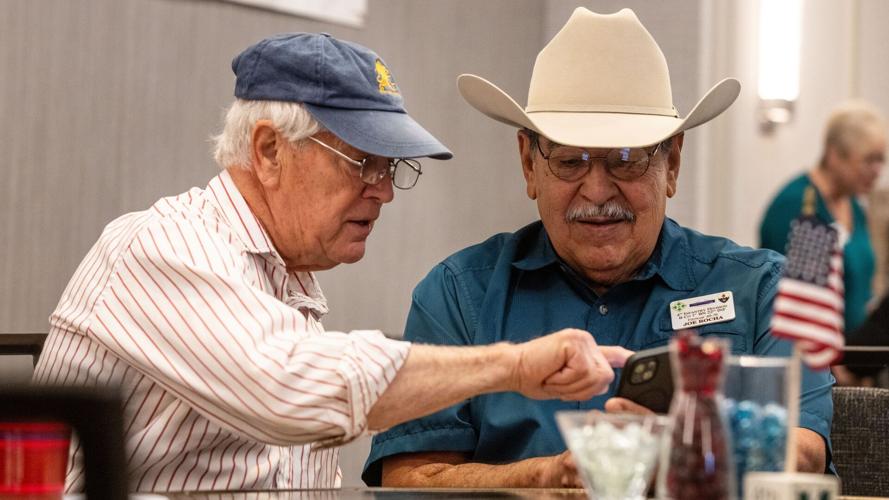 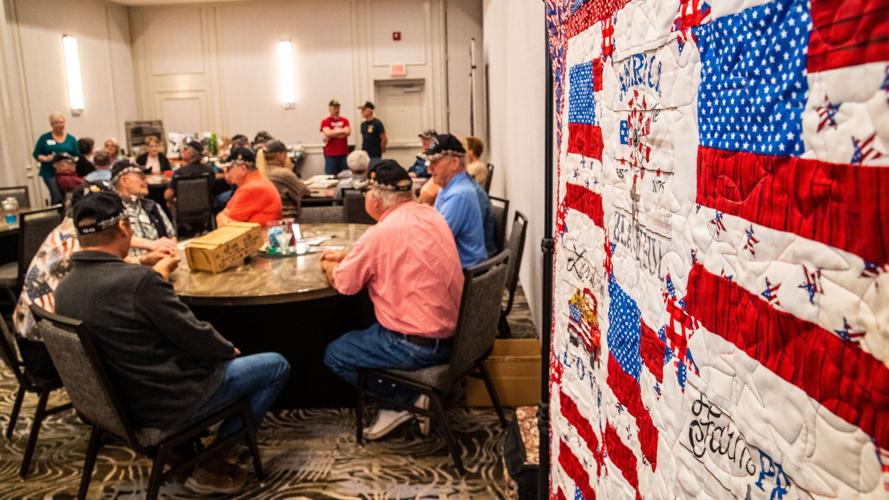 A quilt hangs in an Omaha hotel Friday during a reunion of Vietnam veterans who served in Bravo Company, 1st Battalion, 22nd Infantry Regiment, 4th Infantry Division. The sale of the quilt will be used to raise money for the next reunion. 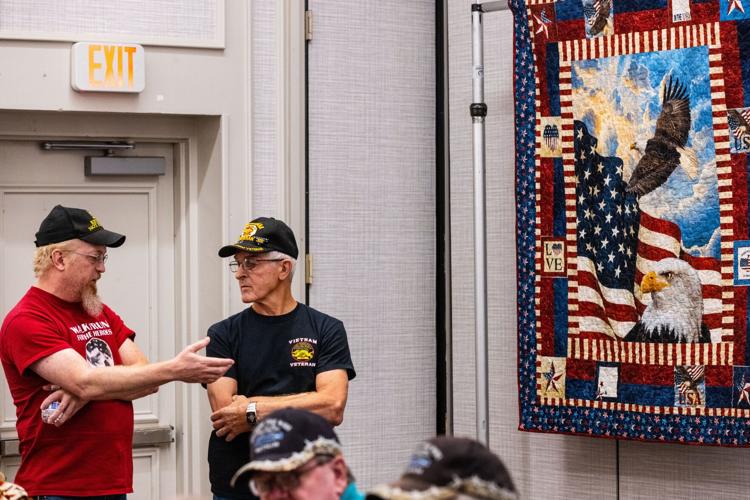 Craig Schatz, left, talks with his father, Ken Schatz, during a veterans reunion in Omaha on Friday. Ken served in Vietnam and Craig served in Iraq and Afghanistan.

What happened in ‘Nam, stays in ‘Nam.

Except, that is, when Vietnam veterans gather and start swapping war stories — as 25 former soldiers from Bravo Company of the 1st Battalion, 22nd Infantry Regiment are doing this week at the Marriott Regency in Omaha.

Their unit, part of the 4th Infantry Division, was headquartered at Pleiku, in South Vietnam’s central highlands, from 1966 to 1972.

As young “grunts,” mostly draftees, on 365-day tours, they saw everything Vietnam had to offer, from bad to worse. Thirty-one Bravo Company soldiers didn’t make it home.

“There’s no words to describe what it’s like there,” said Dennis Sowards, 73, of Kenova, West Virginia, whose tour began in May 1969. “You spend 50 years trying to put it out of your mind. Now you’re trying to recall it.”

It’s tough to forget days like June 24, 1969 — Bravo Company’s deadliest day — when a sling load of ammunition being dropped by a helicopter exploded, killing five soldiers and wounding several others. That was one month into Sowards’ tour.

Now more than 50 years later, the old Bravo Company soldiers are gathered around tables, laughing and teasing — crowding out the awful memories of Vietnam in search of the lighter ones.

Memories are prompted by thick blue photo albums, stuffed with snapshots of their younger selves, suntanned and trim in their battlefield khakis.

“This is the way we see ourselves,” Sam Nipper, 74, of Mount Washington, Kentucky, said with a smile. “Not the way we look in the mirror now.”

Nipper described himself as “young and dumb and indestructible” when he first stepped off the plane in Vietnam in September 1968.

“When you get there, you look around and say, ‘What in the world?’” Nipper recalled. “We all got a little closer to the Lord.”

During the Vietnam War, infantry squads frequently ventured into the jungle. Their mission was to smoke out hidden enemy forces so they could be killed, either in firefights or with artillery and airstrikes.

“Three guys would go out for three days and set up observation,” said Tom Verhovsek, 74, of Bradenton, Florida. “We were not to engage (the enemy). It was scary.”

Fred Spence of Emmett, Idaho, recalls one such mission that still gives him goose bumps. His trio of soldiers had bedded down in the bush, trying to stay inconspicuous, when the sound of drumming filled the night air.

“They beat on drums all night long,” he said. “It scared the hell out of us.”

They later learned that local villagers were drumming to mourn the death of their chief.

Another time, Verhovsek and Steve Enfante were on a green eyes mission with a third soldier.

The soldiers heard a loud and startling noise, right in their midst. Enfante said he was preparing to call it in as a “delta tango,” or defensive target, and leave the area as fast as possible.

Then he saw what the delta tango really was.

“A little orangutan, about yay high, popped up,” said Enfante, 74, of Fort Morgan, Colorado, holding his hand at waist level.

The third soldier, startled, threw a punch at the simian intruder. And another.

But the fight wasn’t over. The monkey was mad.

“This little feller beat this big guy up. Then he walked away, just like this,” Enfante recalled, hopping apelike and laughing.

Those are the kinds of memories that faded for years. Many of the Bravo Company veterans came home traumatized and bitter.

“I think most of us, we were in denial,” Nipper said. “It took awhile to deal with it.”

Most married and raised families. They worked hard, and they bottled up their trauma. Many drank. While some joined VFW and Legion posts, others avoided all things military.

But the men of Bravo Company didn’t forget about the guys they served with. By the early 2000s, for some of them, their curiosity overcame their ambivalence about Vietnam. And the internet made connecting easier.

“It originally started with four guys, trying to find each other,” said Danni Verhovsek, who with her husband organized this year’s event.

That first reunion included Nipper, Enfante, Cecil Sanders and 10 other Bravo boys, gathering for lunch at a restaurant in Louisville, Kentucky, in 2005.

“It was supposed to be a one-year thing,” Nipper said. “We just kept doing it.”

Year after year — in Branson, Missouri; San Antonio, Texas; Gatlinburg, Tennessee; Washington, D.C. Some came reluctantly at first, and only after old buddies wheedled them into it. They weren’t quite ready to confront that part of their past.

The veterans and their wives have become a big, extended family.

“This is what they do, once a year. They look at the (photo) books and start laughing,” Danni Verhovsek said. “They do help each other.”

Enfante called the group “a band of brothers that no one could take apart.”

The reunions bring forgiveness. Garry Root tells of his seething anger back in Vietnam at another soldier who pilfered two airline-sized bottles of whiskey his uncle, a veteran, had given him with instructions to drink them on Christmas Eve.

Decades later, Root encountered the same soldier at a reunion. The man slipped him a fifth of Seagram’s and said, “Here you go. This is with interest.”

This is the first reunion in three years, due to COVID-19, and the first in Omaha.

Kerry Otte, of Wayne, is one of the few Nebraskans attending — this time, as a widow. Her husband, Dennis, died in 2020 of cancer.

Dennis Otte had served with Bravo Company in 1966-67. He was wounded and sick with malaria when he came home to Wayne, and felt a cold shoulder.

“He didn’t say anything about Vietnam,” said Kerry Otte, who met Dennis in 1968 and married him three years later. “He was born and raised in that town, and no one wanted to talk about it.”

Over the years, he sold steel sheds and grain bins and ran several small businesses — construction, knife-sharpening, heavy equipment operation. He hunted, fished, was active in his church and the local American Legion and VFW. He chaired a committee to build a veterans memorial in Wayne.

“This is his company,” Kerry Otte said. “That comradeship just made a world of difference.”

Even with her husband gone, Kerry was not about to miss this reunion.

“It beats sitting home,” she said. “I’m just comfortable with them. Dennis said, ‘These are my people.’”

'We thought we were invincible': Midlands copter pilots forged bond in nearly forgotten battle in Laos

A salute to service: A collection of our recent stories about veterans

Catch up on our recent stories about Nebraska vets in honor of Veterans Day.

Omaha WWII vet, 103, who built bridges across the Rhine has 'just kept going'

Walter Coy, one of Nebraska's oldest living veterans at 103, likely won't stray far from his Omaha home on Veterans Day. But he remains active. “All I can say is, I kept living. Just kept going.”

On Veterans Day, Marty Ramirez will be at his childhood stomping grounds to unveil the final phase of the Chicano/Mexican-American Veterans Monument honoring Scottsbluff-area Hispanics who served.

At the Vietnam Veterans Memorial in Washington, D.C., Vince Orduña confronted the memories of soldiers he knew who died fighting in Southeast Asia, and forgave himself for surviving while they didn’t.

Bob Wiegand served on a ship convoying war supplies to American service members. He bore the risk of sudden attack by kamikaze aircraft or submarine-launched torpedoes. It was dangerous work.

After earning her master’s — specializing in women’s health — Mary Smith was ready to deploy. She got the call in 2008, when she was sent to Bagram Air Base, Afghanistan, for five months.

The Rev. Suzanne How, pastor of Immanuel State Line Lutheran Church in Wymore, Nebraska, presided over the September services for Cpl. Daegan Page, a Marine from Omaha who was killed in Afghanistan.

Back in the day, Nov. 11, 2017: Nebraska's last living Tuskegee Airman was grand marshal of parade

Four years ago, 93-year-old Robert Holts, the last surviving member of the Tuskegee Airmen in Nebraska, was grand marshal of the Defenders of Freedom Veterans Day parade. Holts died in February 2021.

Veteran reunites with soldier who saved his life in Vietnam

Five Vietnam War photojournalists died when their helicopter was shot down in 1971. Nearly 30 years later, fragments of their remains were recovered, eventually ending up at Offutt Air Force Base, where they will stay until a permanent burial site can be found.

A quilt hangs in an Omaha hotel Friday during a reunion of Vietnam veterans who served in Bravo Company, 1st Battalion, 22nd Infantry Regiment, 4th Infantry Division. The sale of the quilt will be used to raise money for the next reunion.

Craig Schatz, left, talks with his father, Ken Schatz, during a veterans reunion in Omaha on Friday. Ken served in Vietnam and Craig served in Iraq and Afghanistan.