Native American imagery has been part of Mutual of Omaha’s logo for 70 years, with the distinctive profile of an Indian chief as a familiar sight atop the Fortune 500 company’s midtown headquarters. But no more.

As part of a number of new initiatives addressing issues of racial equality and social justice, the insurance company announced Friday that it’s immediately retiring the longtime logo.

Mutual of Omaha CEO James Blackledge said that to Mutual, its logo has never had a disrespectful connotation, having been adopted years ago as a symbol of strength and respect. And he said he was aware of no complaints about it from external groups.

“But we are still using a symbol from another culture that isn’t ours,” he said in an interview. “We don’t want to or need to appropriate that symbol. The Mutual of Omaha name stands on its own, and we want to be part of the change that’s happening.”

Mutual’s logo change will be accompanied by a number of other measures intended to promote racial equality and inclusivity, including internal changes and additional support for charities working toward those goals.

The company’s moves are the latest in a nationwide reckoning over race and equality in the wake of the May killing of George Floyd while in Minneapolis police custody.

Corporations, state and local governments and organizations across the nation have been making new commitments to address issues of equality. Confederate symbols and others seen as disrespectful and hurtful to people of color have been coming down.

Mutual first adopted the Indian head logo in 1950. Company histories indicate it was intended to represent the Plains Indians and their values of strength of character, honesty and care for their members. As a mutual insurance company, the Omaha-based company is owned by its policyholders, so the symbol seemed to fit geographically and philosophically.

The logo has been updated a few times over the years but has continued to be widely used on the company’s promotional products and signage. It has been featured on the company headquarters building since a renovation that was completed in the 1970s.

In the wake of Floyd’s death, internal discussions began within Mutual on its own progress toward racial equity and what more it could do. A working group was formed. And during those discussions, Blackledge said, the company’s logo began to come up.

“I wouldn’t say it was a groundswell,” Blackledge said. “But it came up enough times that we started to reflect on it.”

And after that reflection, the company decided it’s time to make a change.

“We believe the decision to retire our corporate symbol is the right thing to do and is consistent with our values and our desire to help overcome racial bias and stereotypes,” Blackledge said. New uses will be discontinued immediately, and the company will begin the process of removing it from signage and other materials. As for Mutual’s logo going forward, the company for now will drop the symbol and continue to use its distinctive logotype. A new logo symbol will be developed.

“We have a lot of equity in the marketplace, so we want to approach this carefully and pragmatically to ensure that we move forward with something that builds on that equity and represents who we are,” said company spokesman Jim Nolan.

The logo won’t be the only change.

The company for nearly two decades has had a diversity and inclusion action group that seeks to promote diverse hiring and an inclusive company culture. Current company policies include seeking diverse candidate pools for job openings, diversity training, and the creation of support and resource groups for diverse workers, including black, Latino, women, LGBT, veterans and people with disabilities.

The company also has donated $2 million a year to charities that work toward racial and economic equality, inclusivity and social justice.

But Blackledge said it’s time to do more to “answer the call” for equality and inclusion.

Mutual said it will provide its management team additional training on diversity and inclusion, including training in identifying unconscious bias. The company will also enhance its efforts to recruit, hire, promote, develop and retain a diverse workforce and to shape an inclusive internal culture.

Performance expectations will also be expanded to evaluate management on progress in those areas, the company said.

The company will also look for more diversity in its suppliers and vendors. That includes seeking out vendors from underrepresented communities and purchasing from suppliers who demonstrate a shared commitment to social justice and racial equity.

And because “money talks,” Blackledge said, Mutual will boost its charitable giving toward equity by $1 million. The company also will encourage its employees to volunteer their time with nonprofits working in that area.

Blackledge said a longtime barrier to creating a company that looks like the community has been the lack of diversity among job candidates coming out of college.

He said supporting charitable groups working to boost educational success for people of color can impact that. But he said the company will also look into creating more opportunities by evaluating whether some of its jobs that currently require a college degree don’t need to.

The changes announced Friday are a start, Blackledge said. There will be more to come.

“It always starts by pointing the thumb and not the finger,” Blackledge said. “In terms of outcomes, we have room for improvement, and recognize that we must do more.”

Nebraska is one of biggest recipients of this federal loan program. But who's getting the money?

Compared to other states, Nebraska has been one of the biggest beneficiaries of the federal Paycheck Protection Program.

Pandemic hits state economy hard, but Nebraska once again better off than most

Economic recovery will take time, and the coronavirus disruption will leave lasting changes in how people spend their money and how people do their jobs. Some Nebraska business leaders see those changes as opportunities for the state to grow.

Buffett has simple message for shareholders during pandemic: 'American magic has always prevailed'

Warren Buffett had a simple message as he spoke to an economically anxious world from an empty, cavernous arena in Omaha: Nothing can stop America, not even the disruptive coronavirus pandemic.

Did Timothy McVeigh case out Omaha as target? Ex-ATF officer thinks so

There was suspicious activity around the former Omaha federal building the week before the 1995 Oklahoma City bombing.

No county in Nebraska has been hit as hard by the coronavirus as Dakota County. Of the nation’s 3,000 counties, the northeast Nebraska county now has the nation’s 23rd highest per-capita death rate.

The tech giant recently announced the winners of the Nebraska Google.org Impact Challenge, which accepted applications from nonprofits with "bold and creative ideas to create economic opportunity."

No local workforce reduction is expected to take place at Senior Market Sales as a result of the deal.

COVID-19 cancels Wyoming hunt amid Native American criticism; Ricketts was to have been invited

In unusual arrangement, donors were in charge of building UNO's new ballfield complex

UNO leased 27 acres of its campus to donors for $10 a year. The school gets back a $23.5 million baseball and softball complex.

The Nebraska Legislature will soon be asked to affirm the U.S. Supreme Court decision barring job discrimination based on sexual orientation.

Much like his predecessor, the new leader of Heritage Services has largely kept a low public profile in Omaha over the years.

From CHI Health Center Omaha, TD Ameritrade Park and the Holland Center to museums and university facilities, brick by brick Walter Scott and Heritage Services have done much to reshape Omaha.

Until now, the vast majority of the deadly outbreaks have never been publicly disclosed. One official likened it to "a damn grass fire."

A study found that there would be savings of roughly $250,000 a year to have the state operate the plan. But there would also be upfront costs of about $4 million to integrate the two systems.

While Blueprint Nebraska supports a report on proposed changes to the state's tax code, critics say it will shift the burden to middle- and lower-income families.

The committee will later issue a report on whether the use of such mascots may perpetuate or exacerbate harassment or a racially hostile learning environment for Native students.

A national leader in the movement to do away with Native American-themed sports mascots called on the Nebraska Legislature on Monday to consider a bill to ban such nicknames.

Mutual of Omaha and the City of Omaha are set Wednesday to announce the blockbuster development, which will reshape the downtown skyline and add a long-discussed midtown streetcar line.

Mutual of Omaha will begin removing its longtime symbol of a Native American chief from signage and other materials. A new logo symbol will be developed. 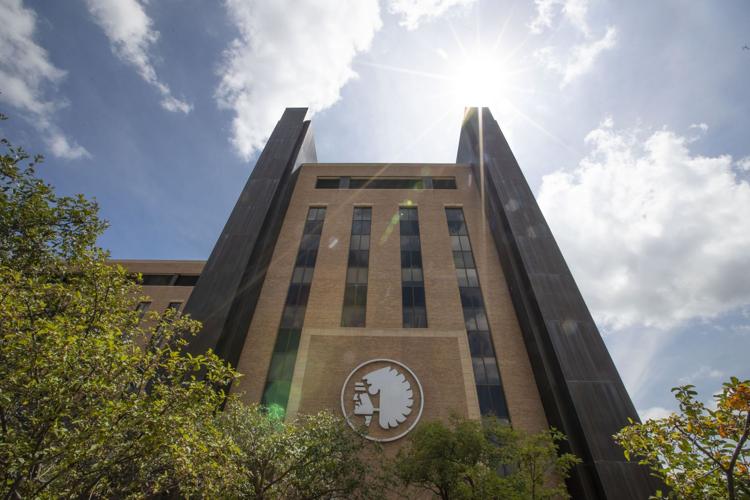 Mutual of Omaha is retiring its logo featuring a Native American chief. The symbol is seen here on the company’s headquarters on Farnam Street.