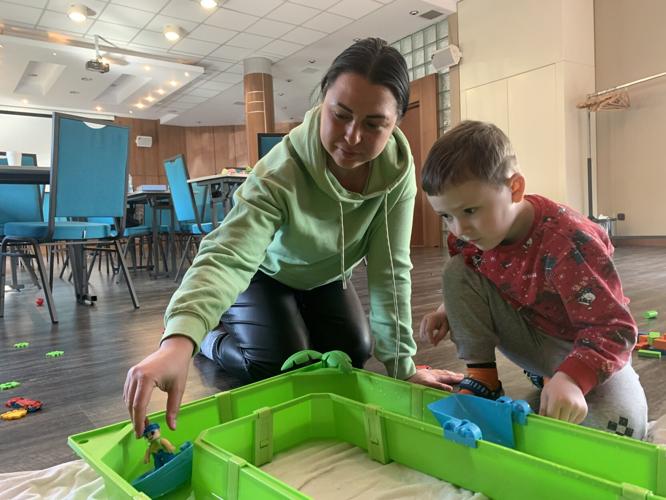 Viktoriia Iordatii plays with her son Timur, 4, in the conference room of the Best Western Felix hotel in Warsaw, Poland. The Ukrainian mother and son took a bus, hitched rides and walked from Odessa, Ukraine, to eventually reach Warsaw. 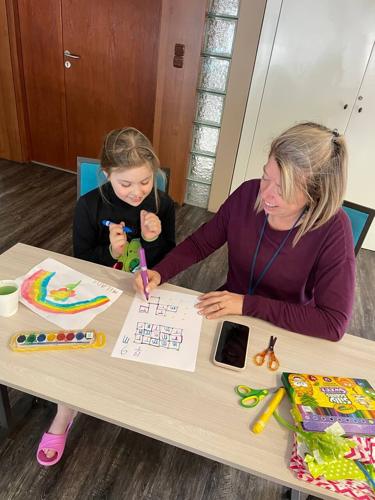 Tara Knuth, executive director of the Lincoln Children’s Museum, plays a game with a Ukrainian refugee child. Knuth and Mandy Haase-Thomas, the museum’s director of operations and engagement, turned a hotel conference room into a makeshift activity room for the refugee children staying at the hotel in Warsaw. 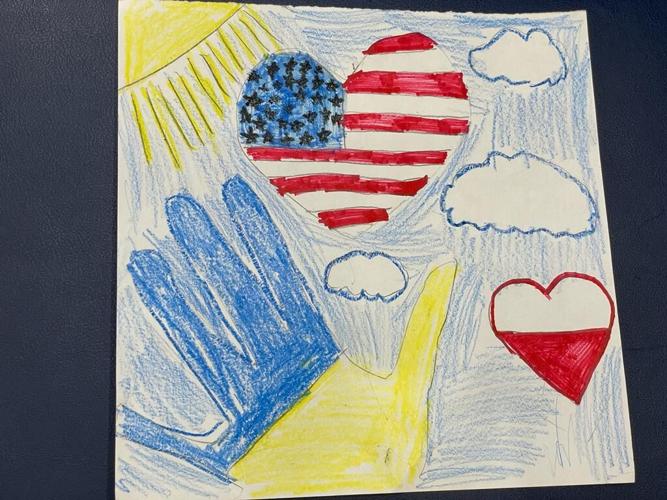 WARSAW, Poland — Eight-year-old Yehor focuses on the task at hand.

On the floor of a hotel hallway, he folds scraps of paper into squares as if packaging a present.

In the past two months, Yehor has slept in the cold hallway of his apartment building in Mariupol, Ukraine, where blasts rattled the windows. Where food and clean water ran out fast.

Then, while sheltering with relatives, an explosion caved in the roof over his head. His mother grabbed Yehor and family cat Mouse and sprinted to the nearest building still standing.

He spent two nights at a school crammed with evacuees. He slept on a flattened cardboard box.

He boarded a minibus crammed with strangers, inching along and stopping at nearly 40 checkpoints on the road out of Ukraine.

That’s how he ended up here — in a hotel in Warsaw, folding his paper package while children next to him craft paper planes.

“What are you making?” asks Mandy Haase-Thomas, a Nebraska volunteer who has come here to help Ukrainian kids like Yehor.

“Wrapping supplies for the war,” he replies.

In the two months since Russia launched a war against Ukraine, an estimated 5.4 million people have fled the country — the largest refugee crisis on European soil since World War II.

Yehor is one of roughly 1.6 million Ukrainian children now spending their days in shelters, hotels and strangers’ homes across Europe.

One of those hotels is a Best Western just east of the Vistula River in Warsaw, where 50 rooms are filled with Ukrainian families trying to figure out what’s next.

This is the headquarters of Operation Safe Harbor Ukraine, a Nebraska-founded project raising money and sending volunteers to keep refugee families safe, housed and fed.

Roughly 160 Ukrainian children have entered this hotel after fleeing violence with their families. Like Yehor, some have seen the dead. They know to fear snipers and bombs. Many left behind fathers and older brothers. All left behind life, and childhood, as they knew it.

Since the Russian invasion, Yehor has rarely cried.

“He is strong, and he is brave,” said his mother, Kateryna Shepotynyk. “He is not afraid.”

Through toys, crafts and games, two Nebraska volunteers from the Lincoln Children’s Museum hope to ease the kids’ trauma, if only for a few moments every day.

(Editor’s note: Flatwater Free Press reporter Natalia Alamdari arrived in Warsaw the same day, a guest of Operation Safe Harbor. The project’s leaders are allowing her to stay in the hotel as she reports. Learn more at operationsafeharborukraine.com.)

The Children’s Museum duo learned about the opportunity when Knuth’s husband came home from playing basketball with news — teammate Steve Glenn, a former Husker football player and Lincoln businessman, was recruiting volunteers to run a hotel shelter for Ukrainian refugees.

The pair was soon on a plane bound for Eastern Europe, flying to this city a few hours from the Ukrainian border — and hoping that what they know about educating Nebraska kids could help the youngest Ukrainians, too.

“Their days used to be school ... their days used to be playing with friends in the neighborhood,” said Knuth, executive director of the Lincoln Children’s Museum. “And then it wasn’t that for a long time. And now, to have some normalcy back … is important.”

Knuth and Haase-Thomas, the museum’s operations director, have transformed the hotel conference room into a makeshift children’s museum.

There are tables of craft supplies and coloring materials. A corner of blocks and toy cars, where the windowsill becomes a pretend race track. The Nebraskans pace the room, helping kids create flowers out of multicolored napkins and pipe cleaner, and passing out beads to string together bracelets.

The Nebraskans don’t speak Russian or Ukrainian. The kids don’t speak English. Most communication happens over Google Translate, by passing a phone back and forth.

In the conference room, it’s the water table — a green plastic bin with canals and toy boats and rubber ducks — that the kids flock to.

Sitting on the conference room floor, Timur Iordatii cranks a handle with one hand to make waves through the plastic river of water. With another, he guides a rubber boat through twists and turns.

Timur and his mother walked 18 miles to the border after their bus leaving Lviv got stuck in stand-still traffic. Along the road, strangers left food and supplies for those walking.

Timur is 4. He’s shorter than his mother’s suitcase. He offered to help roll it along the side of the road.

He got sick after sleeping on a cold school floor near the border. They moved several times before landing at the Best Western.

After two months, they finally have their own shower. Timur is finally around kids who have been through what he has. “A gift from God,” his mother said.

In this hotel, even playtime is infused with war: A leftover box becomes a make-believe tank. Armed with blue and yellow markers, children color the Ukrainian flag into hearts and outlined hands.

Play is a language, Haase-Thomas said, shedding light on how kids grapple with their world.

The duo from the Lincoln Children’s Museum came to Warsaw to offer comfort through play.

“These kids have lost everything,” Knuth said. “There’s some safety in what you know.”

By the end of their makeshift museum’s first day, the Nebraskans had to set up an extra table because so many young refugees — and their moms — wanted to make bracelets. Kids walked around showing off their handiwork, while moms chatted and kept their hands busy stringing beads onto pipe cleaner.

Children, mothers and volunteers walked out with rainbows of bracelets on their wrists.

Before Haase-Thomas decided to leave for Poland, her 6-year-old daughter asked: “Mommy, did you know there are people who don’t have houses? Can we give them money? We have enough.”

A few days later, she attended a church service about following your heart. She spoke to Glenn, who told her that he could tell her heart was set on helping Ukrainian kids.

Now Knuth and Haase-Thomas try to make the Ukrainian parents’ lives easier. They play with their children. They run to the pharmacy to grab medicines. They serve meals. They try to lift a little weight from the parents in the hotel. They can only lift so much.

“What we can do during the day does not change what (the children) are probably experiencing at night. When things get quiet, when their thoughts come back,” Knuth said.

The best they can do: Offer something else for the kids to remember.

“That when they look back on this time, it’s not all bad memories,” Knuth said. “That there are people that played with them, who gave them attention, who loved them.”

“Who wanted to make sure they felt safe,” Haase-Thomas said.

Since leaving Ukraine, Yehor hasn’t been in school. He plays in the hotel halls with his newfound friends. He wraps imaginary supplies for the war he just escaped.

And, on the second day after Lincoln volunteers set up shop, he walks into the makeshift children’s museum.

He colors. He throws plastic darts with the other children.

“He needs to forget about what he’s seen and what he felt,” his mother said. “And here is a place where we can do it.

Yehor does not know that he and his mother will soon fly to London to join his aunt. To start a new life.

In this moment, in a Warsaw hotel’s converted conference room, he plays, like an 8-year-old should.

“It’s tragic what’s going on right now. I fear the violence is going to continue,” said Jody Neathery-Castro, a political science associate professor at the University of Nebraska at Omaha.

Russia's invasion of Ukraine has presented the U.S. with the starkest threat of nuclear conflict since the end of the Cold War, and has thrust Nebraska-based StratCom into an unaccustomed spotlight.

As the world learned of Russian attacks on Ukraine, Ukrainians living in Omaha tried to contact their families and friends back home to make sure they were safe.

Biden: Fight over abortion rights 'is not over'

Viktoriia Iordatii plays with her son Timur, 4, in the conference room of the Best Western Felix hotel in Warsaw, Poland. The Ukrainian mother and son took a bus, hitched rides and walked from Odessa, Ukraine, to eventually reach Warsaw.

Tara Knuth, executive director of the Lincoln Children’s Museum, plays a game with a Ukrainian refugee child. Knuth and Mandy Haase-Thomas, the museum’s director of operations and engagement, turned a hotel conference room into a makeshift activity room for the refugee children staying at the hotel in Warsaw.