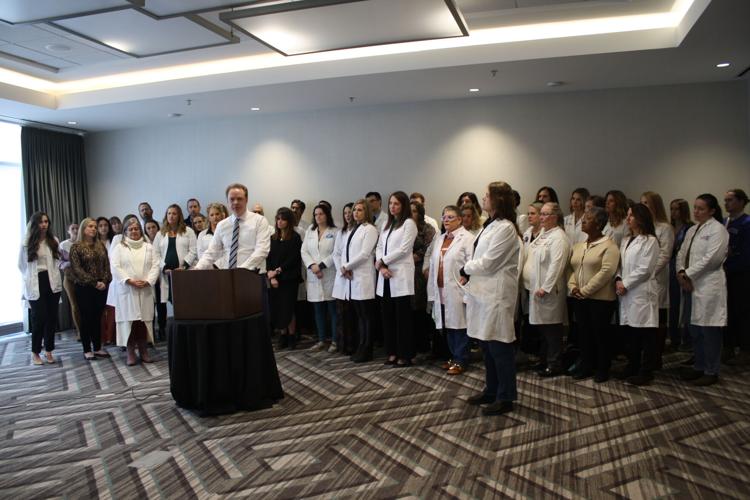 Dr. Neil Hamill, a maternal-fetal medicine specialist, speaks out against a proposed six-week abortion ban during a Sunday press conference. 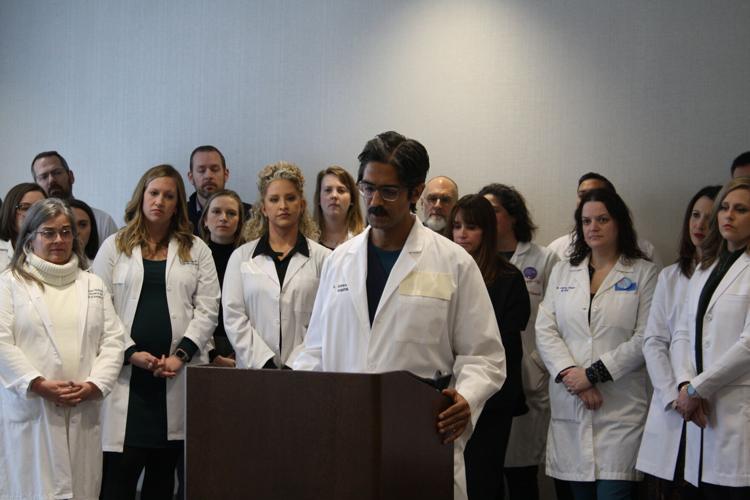 Dr. Asit Goswami, a hospitalist, speaks out against Legislative Bill 626, which would ban all abortions past six weeks gestation in Nebraska.

On the day that marked the 50th anniversary of Roe v. Wade, the landmark Supreme Court decision that safeguarded abortion as a constitutional right before it was overturned last summer, dozens of Nebraska health care professionals gathered to express their opposition to a proposed six-week abortion ban in the state.

About 50 people representing many branches of the health care field came together Sunday to express grave concern over the proposed ban. The group, the Nebraska Alliance for Physician Advocacy, is led by Dr. Maureen Boyle, a Douglas County Board member and practicing OB-GYN.

“It is with professional and personal experience with pregnancy that I say Legislative Bill 626 is dangerous for pregnant people and medically irresponsible,” said Dr. Mary Kinyoun, a practicing OB-GYN in Omaha, as she cradled her own pregnant belly. “In a time where there’s a maternal health crisis in this country — particularly for Black birthing people — we as the experts in obstetrics and gynecology fear the significant repercussions restrictive abortion laws would have in Nebraska.”

Legislative Bill 626, also referred to under the controversial title of a “heartbeat bill,” was introduced by 29 state senators earlier this month. If passed, the proposal would ban all abortions after a “fetal heartbeat” can be detected, which typically happens at around six weeks past fertilization.

Medical experts take issue with the term “fetal heartbeat,” as they say the heart is not developed enough to produce a heartbeat at six weeks. According to the American College of Obstetricians and Gynecologists, the “heartbeat” heard on an ultrasound is the machine translating electronic impulses that signify fetal cardiac activity into a heartbeat-like sound.

The term “fetal heartbeat” is defined in the bill as “cardiac activity or the steady and repetitive rhythmic contraction of the fetal heart within the gestational sac.”

The bill would require any physician performing an abortion to estimate the gestational age of the fetus, perform an ultrasound to check for a “fetal heartbeat” and record the information in the patient’s medical record. If the physician does not collect and record this information or if they perform the abortion after detecting a “heartbeat,” they could lose their medical license.

Exceptions for medical emergency, sexual assault and incest are made in the bill. But physicians said Sunday that these provisions are not enough to ensure that women who are in personal or medical danger can access needed health care.

Dr. Neil Hamill, a maternal-fetal medicine specialist, said the exemption for medical emergencies wholly misses the mark. He gave the example of the birth defect anencephaly, which causes the fetus to develop without a brain and parts of the skull. Under LB 626, the mother would be forced to carry the baby to term despite the fact that the child will almost certainly die soon after birth.

LB 626 does not provide an exemption for nonviable pregnancies aside from ectopic pregnancies.

“This bill would have a mother carry a pregnancy where a lethal outcome is guaranteed while we wait for her to have a blood clot, stroke or die,” Hamill said. “It’s crazy to think that people could write exemptions that cover the whole breadth and scope of medicine, let alone obstetrics. This legislation ignores the basic biology at work. It ignores the principal of patient autonomy. It ignores the hours of detailed conversations that are involved between a patient and her physician in making the most difficult decision a patient may ever be faced with.”

Two fourth-year medical students also spoke at Sunday’s press conference, held at the Marriott in downtown Omaha’s Capitol District. Tyne Olivia Tyson, who is hoping to get into obstetrics and gynecology for her residency, spoke about the impact that the bill could have on attracting and retaining young talent in Nebraska.

A non-native who moved to Nebraska for medical school, Tyson said she imagined herself starting a life and family in Omaha when she moved here in 2019. But the potential for a strict abortion ban has forced her to reconsider the future she had imagined in Nebraska — something that she thinks other young medical professionals will consider when deciding where to go to school or set up their practice.

“The new laws this Legislature have proposed make it hard for me to imagine a future in Nebraska,” Tyson said. “A law which threatens to revoke our licenses is simply too high a risk. I’ve studied for years to become a physician and invested a huge amount of time and money to achieve this goal. Now, I’m finally at the finish line. Why would I stay in a state that threatens to take that all away from me?”

State of the Union address: Biden touts US eco­nom­ic progress

State of the Union address: Biden touts US eco­nom­ic progress

Dr. Neil Hamill, a maternal-fetal medicine specialist, speaks out against a proposed six-week abortion ban during a Sunday press conference.

Dr. Asit Goswami, a hospitalist, speaks out against Legislative Bill 626, which would ban all abortions past six weeks gestation in Nebraska.