In February, the Defense Department’s Inspector General agreed to investigate the Trump administration’s selection of Redstone Arsenal as the “preferred choice” for the permanent headquarters over Nebraska’s Offutt Air Force Base, Colorado’s Peterson Air Force Base and three other sites in New Mexico, Texas and Florida.

Outgoing Air Force Secretary Barbara Barrett announced the decision Jan. 13, a week before President Donald Trump left office. Colorado officials from both parties have alleged Trump chose Redstone over Peterson, which is in Colorado Springs, as a political payoff to Alabama supporters.

In addition to Fischer, the letter was signed by Sens. Michael Bennet and John Hickenlooper of Colorado, Ben Ray Luján and Martin Heinrich of New Mexico, and Dianne Feinstein and Alex Padilla of California.

The Government Accountability Office, which is Congress’ own watchdog agency, announced two weeks ago it will also launch an investigation.

Fischer and other Nebraska political and business leaders have said they support the Inspector General and GAO investigations, but they have not signed on to previous letters demanding action. 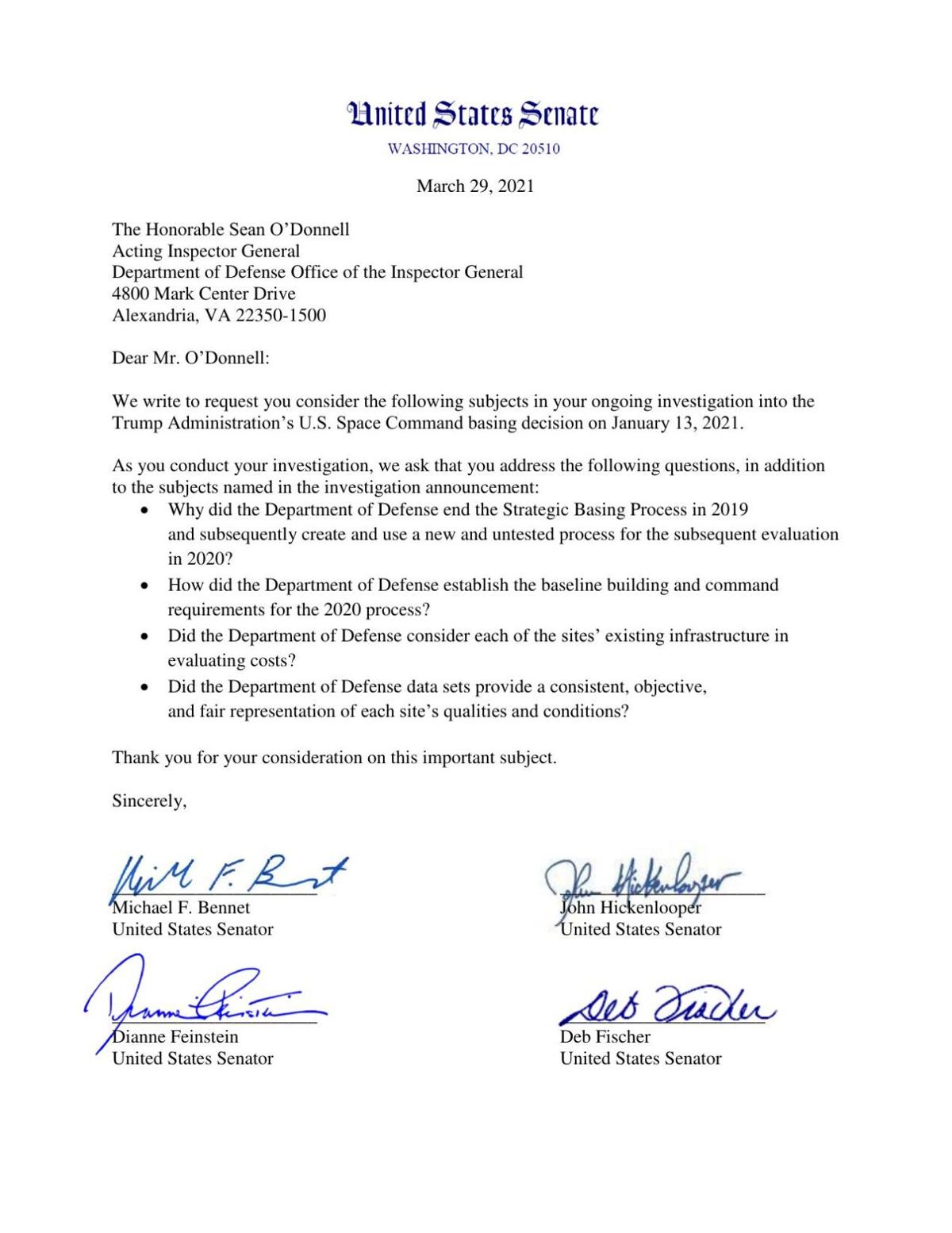 Her office declined an interview, but a press aide released a brief statement.

“Senator Fischer has continued to follow this issue closely and wants to ensure this IG investigation considers some basic questions,” the statement said.

A memo posted to the inspector general’s website in February said the IG intended to study whether the Air Force used “objective and relevant” scoring factors to rank the six locations, and whether costs and other scoring factors had been accurately calculated.

SpaceCom’s headquarters was located in Colorado Springs from 1985-2002 when it was previously a major combatant command, and again when that status was restored in 2019. Between 2002 and 2019, SpaceCom fell under the command umbrella of U.S. Strategic Command at Offutt.

Rep. Don Bacon, R-Neb., was briefed in February on the Air Force’s selection of Redstone, which is the headquarters of the U.S. Space & Rocket Center, the Missile Defense Agency and the Army Space and Missile Command.

He said the selection committee ranked Offutt second to Redstone based on the low cost of living, quality of schools and a $107 million financial package offered by state and local governments, but it was later bumped to third, behind Peterson.

He said Offutt lost out because the Omaha area does not have the space-related support businesses offered in Huntsville — which bills itself as “Rocket City” — and Colorado Springs.

Alabama site selected over Offutt for Space Command HQ, but Nebraska boosters haven't given up yet

Redstone Arsenal in Huntsville, Alabama, has been selected over Offutt Air Force Base as the "preferred" site of the future headquarters of the U.S. Space Command, the Air Force announced Wednesday.

Nebraska’s political, business, educational and military leaders have Zoomed their pitch to bring the U.S. Space Command headquarters to Offutt Air Force Base.

Just in case all of Nebraska’s benefits aren’t enough to bring the U.S. Space Command’s headquarters to Offutt Air Force Base, backers of the bid have come up with a few more reasons.

The proposal would allow the University of Nebraska to seek long-term financing to repair, renovate and replace hundreds of buildings it maintains across the state.

For three years, Rep. Don Bacon has suffered from worsening cough and shortness of breath. A few weeks ago, he learned that the condition is a lingering injury from a Jan. 31, 2018, Amtrak crash.

Which Democrats are considering a run to face Rep. Don Bacon in 2022? There are as many potential candidates passing on the race as there are those who are interested.