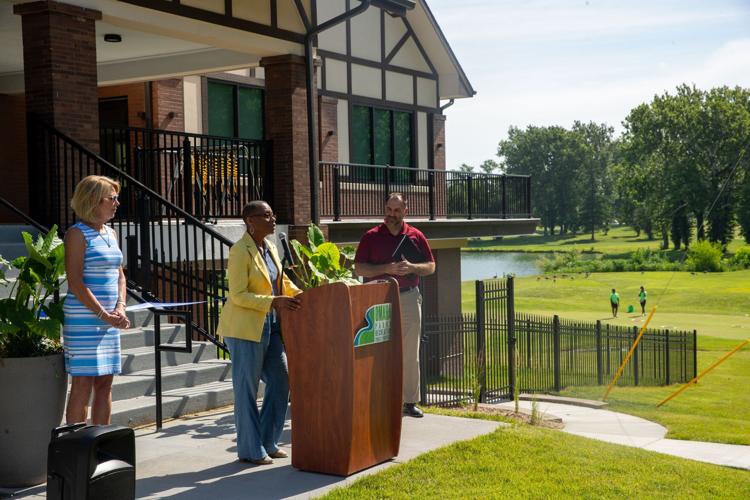 Council member Juanita Johnson speaks at the Miller Park Pavilion ribbon-cutting ceremony on Thursday. The pavilion underwent a total renovation, including the addition of a new 2,000-square-foot patio. 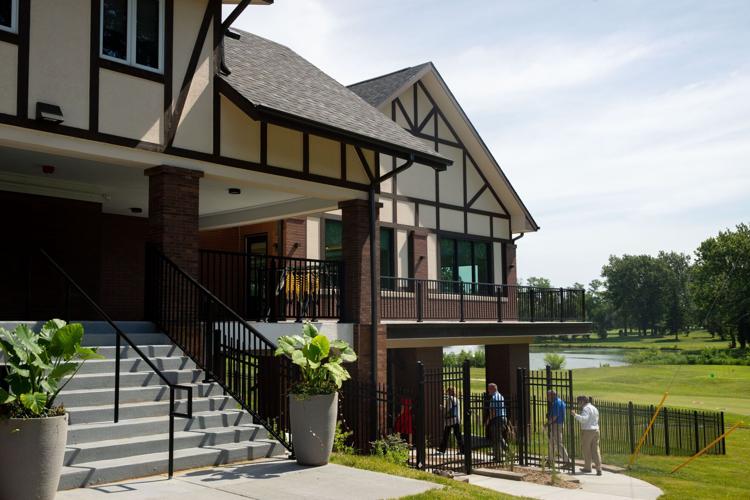 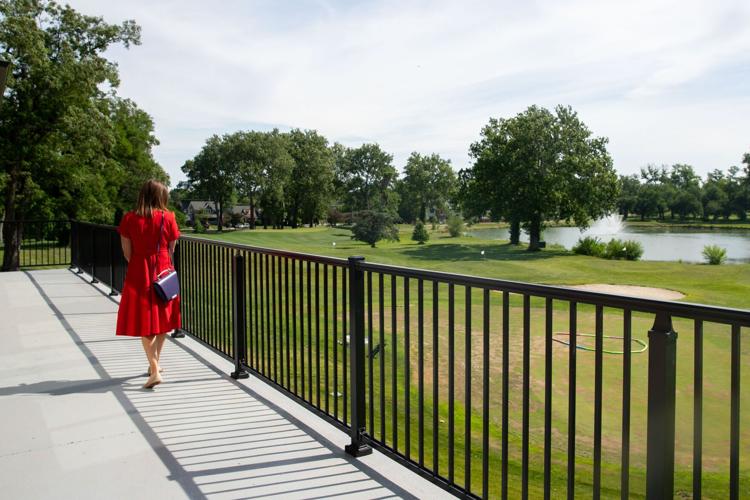 Collette Lozier checks out the new patio at the unveiling of the renovated Miller Park Pavilion on Thursday. The Lozier Foundation helped fund park improvements. 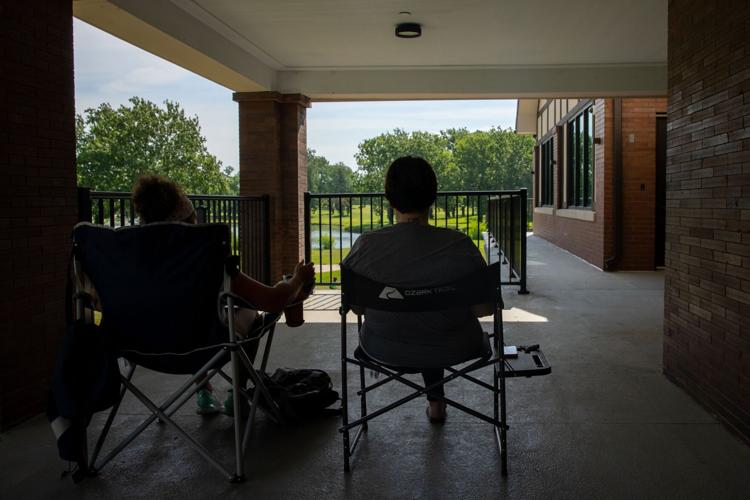 Ketterina Mosby, left, and Stacey Rodriquez sit in their lawn chairs Thursday and enjoy the view from the Miller Park Pavilion patio, part of the $2.1 million renovation of the pavilion.

Refurbishment of the pavilion has been completed, and a focal point of the community building is its panoramic view of the park’s lagoon and golf course. The building features 3,700-square-feet of interior space, a kitchen and a 2,000-square-foot patio. After a ribbon-cutting Thursday, it’s already been booked for a weekend birthday party.

The renovations cap about $8.4 million in philanthropic-driven improvements at the park over the last five years.

About $6.7 million of that has gone toward general park improvements, including the pavilion, building an amphitheater, a walking trail, a dog park and sports courts. Most of that funding came from the Lozier Foundation.

A separate fundraising effort was the $1.7 million donated by the community to build Kerrie Orozco Memorial Ballfield to honor a beloved police officer who died in the line of duty.

At the pavilion’s ribbon-cutting, Omaha Parks Director Matt Kalcevich described the city’s partnership with Lozier as “very much the wave of the future” for parks in Omaha.

Neighbors around Miller Park, located at 2707 Redick Ave., say they are grateful to the Loziers, not just for the improvements, but also for their willingness to listen to the public’s concerns.

The Lozier Foundation has its roots in North Omaha. Allan Lozier, who died last year, grew up around Miller Park and located his business in northeast Omaha. He and his wife, Dianne, launched the foundation.

The foundation originally envisioned tearing down the more than a century-old pavilion and building something “shiny and new,” Dianne Lozier said.

Neighbors said they wanted the original building preserved, she said, acknowledging the added cost of working with an older building.

“But this is a much better outcome,” she said.

Historic preservation is important to the neighborhood, said Michelle Jackson-Triplett, president of the Miller Park-Minne Lusa Neighborhood Association. Minne Lusa, known for its bungalows and Craftsman-style homes, is on the National Register of Historic Places.

“Our neighborhood tends to feel overlooked in our wishes and desires,” Jackson-Triplett said. “To have a partnership with an entity that carries out our ideas is a refreshing thing — and it’s greatly appreciated.”

About 50 people attended the ribbon-cutting, including neighbors and youths who attend the Kids Can summer camp at the pavilion.

“I’m speechless,” longtime neighbor Suzanne Schonberner said of the chateau-style building’s spruced-up exterior. Schonberner said her family has been coming the park for almost 30 years. “We have enjoyed this for years and now we will continue to,” she said.

Jackson-Triplett said the renovations have brought people back into the park and given the community a place to be together. “It has been a solidly uniting and unifying force for the neighborhood,” she said.

At any given time, there’s probably someone exercising a dog, children playing at the splashpad or golfers taking in a round at the park’s Steve Hogan Golf Course.

Volunteers picking up litter is also a common sight.

“Its upkeep is paramount; we do need the support of our community partners,” Jackson-Triplett said with a nod to the Omaha Parks and Police Departments.

Kalcevich said the city’s next improvement at the park is completion of a $700,000 city-funded maintenance shed. Later this summer, a live-in caretaker will return to the park, which will help address neighbors’ concerns about sustained maintenance and security.

Kalcevich said the city would take into consideration other items on neighbors’ wish-lists, which include improved parking and added security cameras.

Kit Lemon spent 31 years in law enforcement handling all types of tense situations. Nothing, she said, compares to her recent encounter with a coyote at Chalco Hills Recreation Area in Sarpy County.

The Bennington school board voted unanimously Monday night to rescind the property purchase for a potential second high school that was located just north of a closed landfill.

Arica Bagley hopes to share the cover opportunity with Kaelynn Partlow from the television show “Love on the Spectrum.”

Three arrested in connection with fatal shooting in Omaha Saturday

Omaha police have arrested three people in connection with a shooting Saturday night that killed an 18-year-old man.

Omaha convenience store worker accused of stealing $37,000 in just over a month

A 21-year-old woman has been charged with felony theft after she was accused of stealing more than $37,000 in about a month's time at an Omaha convenience store.

Nebraska Wildlife Rehab has been trying to corral ducks and geese after an accident near 171st and West Center Road caused mineral oil to flow into nearby Lakeside Lake.

This week, the Offutt-based unit that operates the fleet of so-called "doomsday" jets is celebrating 60 years of service. The unit has faced its share of headwinds in recent years.

Council member Juanita Johnson speaks at the Miller Park Pavilion ribbon-cutting ceremony on Thursday. The pavilion underwent a total renovation, including the addition of a new 2,000-square-foot patio.

Collette Lozier checks out the new patio at the unveiling of the renovated Miller Park Pavilion on Thursday. The Lozier Foundation helped fund park improvements.

Ketterina Mosby, left, and Stacey Rodriquez sit in their lawn chairs Thursday and enjoy the view from the Miller Park Pavilion patio, part of the $2.1 million renovation of the pavilion.