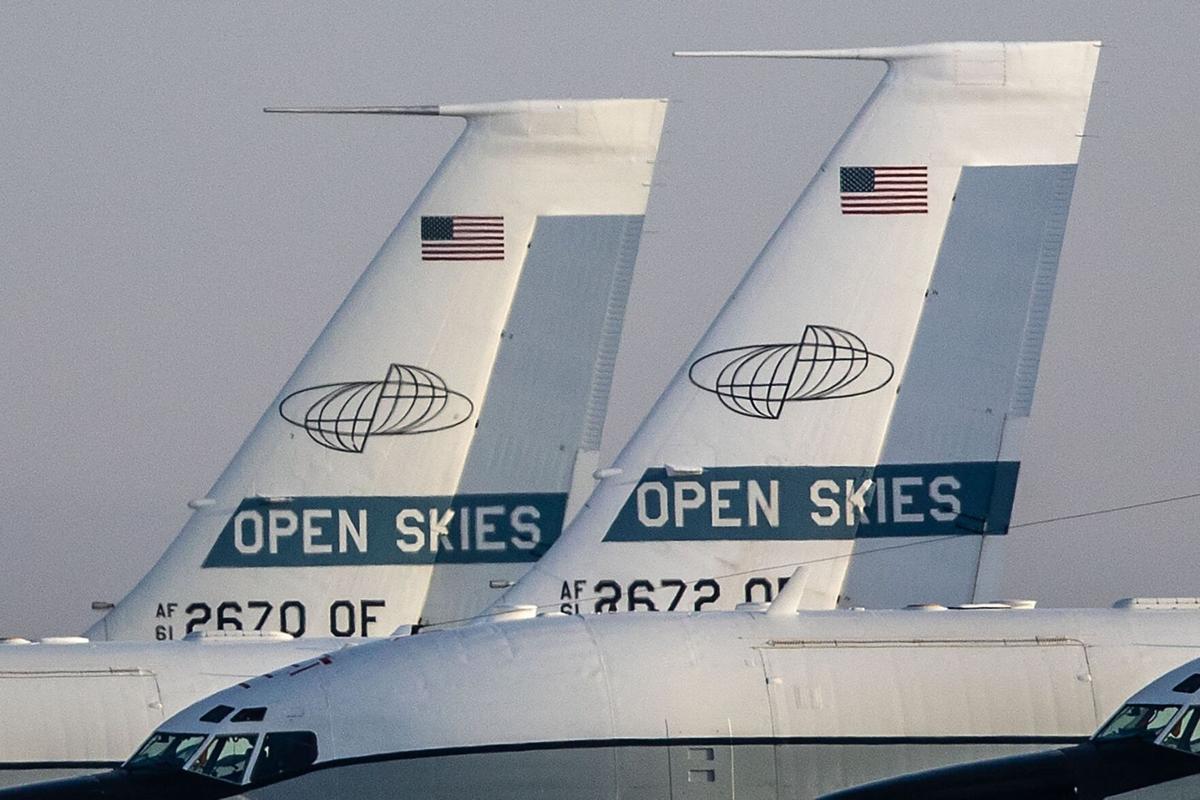 Two Offutt-based OC-135B jets, shown parked at Lincoln Airport last month, will soon be retired. The planes, which for nearly 20 years have flown missions over Russia as part of the Open Skies Treaty, will be be mothballed in a “boneyard” in Arizona and eventually scrapped. 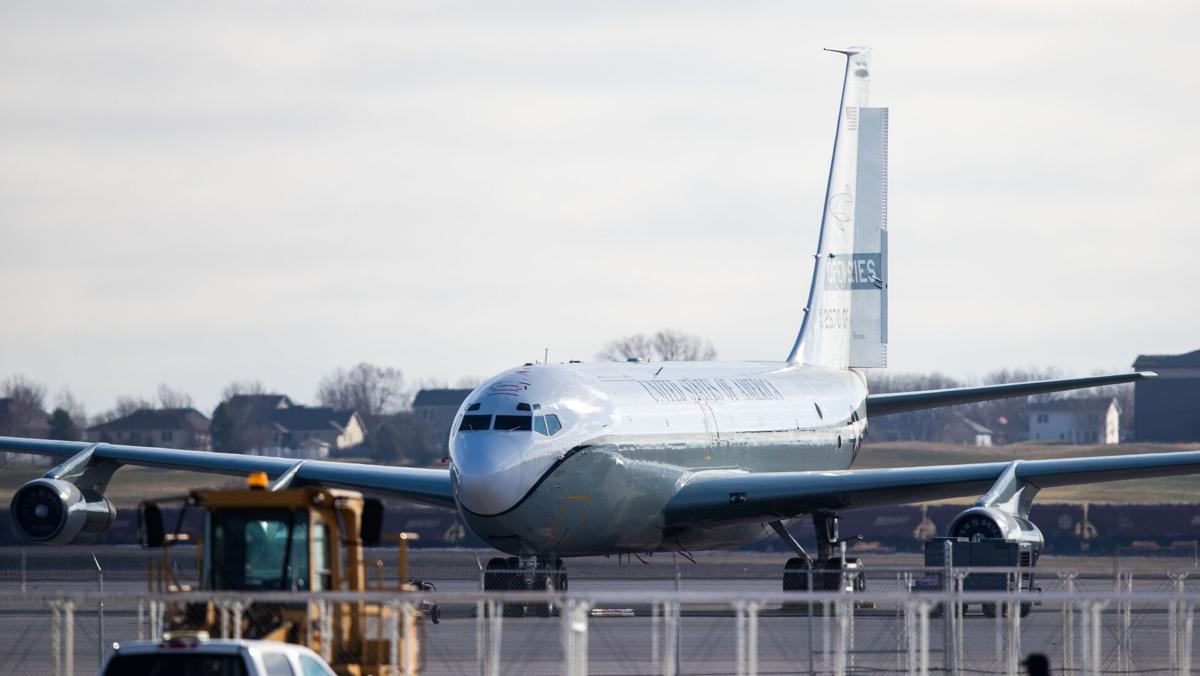 An Open Skies OC-135B jet at the Lincoln Airport in March. The move to junk the jets had been rumored since the Trump administration formally withdrew the United States from the treaty in November.

The Air Force is going forward with plans to mothball two aging, trouble-prone 55th Wing jets used for flying aerial photography missions over Russia as part of the international Open Skies Treaty. The move amplifies doubts about the future of the 34-nation pact.

The OC-135B aircraft, which are nearly 60 years old, are based at Offutt Air Force Base and will be flown to Arizona in May or June for storage in the desert “boneyard” at Davis-Monthan Air Force Base, said Rep. Don Bacon, a retired brigadier general who once commanded the 55th Wing.

An Air Force spokesperson confirmed the news in a statement to The World-Herald on Friday.

Currently the jets are operating out of Lincoln Airport, along with about 30 other Offutt-based aircraft, during an 18-month reconstruction of Offutt’s runway.

Once at the boneyard, they’ll be cannibalized for spare parts, and eventually cut up for scrap.

The information, according to Bacon, came from a report delivered Wednesday to members of the Congressional Armed Services Committees by acting Secretary of the Air Force John Roth.

The move to junk the jets had been rumored for months, ever since the Trump administration formally withdrew the United States from the treaty in November.

Bacon said the report appears to shut the door on a return to the treaty, although then-candidate Joe Biden had said while campaigning last year that he favored sticking with it.

“They’ve determined they’re not going to do Open Skies anymore,” Bacon said. “It treats it as matter-of-fact that we’re out of the treaty.”

The report also says the two planes are too expensive to operate for any other use. The four-engine OC-135s cost $11,093 per hour to operate, Bacon said, more than five times the cost of a 22-passenger RC-26 Metroliner or twice as much as a RQ-4 unmanned aircraft.

“These aircraft are old and costly, and it costs too much to operate them,” Bacon said.

Look, up in the sky! A Russian 'spy' plane flies over the Omaha area on Friday

The Air Force will also dispose of the suite of cameras, called “sensors,” on the two jets. It had just spent $42 million to purchase new digital sensors for the OC-135s to replace obsolete wet-film cameras. They had been installed on one plane.

The Open Skies Treaty was negotiated in the early 1990s and took effect in 2002. It allowed the U.S., Russia, and 32 other signatory nations to conduct the highly structured, supervised flights over one another’s military facilities without restrictions — at least in theory.

The treaty had long enjoyed bipartisan congressional support, but then-President Donald Trump withdrew last year after a campaign by several hawkish Republicans — including former national security adviser John Bolton and Sen. Tom Cotton, R-Arkansas — against the treaty because of alleged violations by the Russians over limits it had placed on certain flights.

Russian leaders have denied the allegations. In January, after the U.S. pulled out, Russia announced it plans to withdraw by early 2022. That move would effectively kill the treaty.

Russia says it will follow US out of Open Skies Treaty. Can it still be saved?

What isn’t in dispute is that the two OC-135B jets are badly in need of replacement.

The two jets are military variants of the civilian Boeing 707, which was last flown by a U.S. airline in 1983. Both were delivered to the Air Force in April 1962 as C-135 transport jets and later were equipped to monitor atmospheric radiation.

Since 1993, they have been dedicated to the Open Skies Treaty mission as part of Offutt’s 45th Reconnaissance Squadron, flown and maintained by 55th Wing crews.

In recent years, the aging OC-135s had one of the worst maintenance records of any Air Force aircraft type, suffering recurring problems with landing gear and electrical generators. They sometimes broke down, inconveniently, at remote Russian airfields.

In one March 2016 incident, uncovered by The World-Herald through a Freedom of Information Act request, a mission was canceled on the ground in Khabarovsk, Russia, after a critical generator failed.

On the flight out of Russia, smoke filled the cabin, and the crew had to fly over a mountain range to an unnamed airfield without cabin pressurization and while wearing oxygen masks.

“The planes were very old and overdue for replacement, whether U.S. would have remained in the Treaty or not,” Peter Jones, a former Canadian diplomat who helped negotiate the treaty and later wrote a book about it, said in an email.

Bacon, Sen. Deb Fischer and Rep. Jeff Fortenberry had maneuvered to get funding for a replacement aircraft included in the defense appropriations bill.

Last year, though, then-Defense Secretary Mark Esper diverted the money for other uses after learning that the U.S. might leave Open Skies.

Congress left a loophole that might allow the Biden administration to return to the treaty. A year ago, at the request of Bacon and Fischer, a provision in last year’s defense authorization bill required future presidents to give notice and justification to Congress before leaving the Open Skies Treaty. Trump disregarded that law.

Steffan Watkins, a Canadian blogger who has studied and written extensively on the treaty, said the U.S. could theoretically rejoin the treaty even without aircraft. The U.S. flew 89 of 201 missions aboard the aircraft of other Open Skies nations between 2002 and 2019, according to data compiled by the Institute for Peace Research and Security Policy in Hamburg, Germany.

He said what may turn out to be the United States’ last Open Skies flight took place in February 2020, in partnership with Lithuania and Estonia aboard Sweden’s aircraft.

“The United States government does not need to have a plane by October 2021, or even in 2022,” Watkins said. “The Americans need to demonstrate they are interested in participating in the treaty they arguably never legally left.”

Fischer has supported the treaty. But in a statement, she indicated she is ready to accept the treaty exit.

“Russia’s failure to obey the parameters of the Open Skies Treaty was the key reason why the US withdrew,” she said. “Rather than invest more in two aircraft that were already slated for retirement, I am focused on the positive future of Offutt’s growing missions.”

Squadron commander says he's still training crews and maintaining aged jets — just in case. "We don't know how this is going to go, either."

“The air crews are being stranded in Russia for weeks at a time, put in really awkward situations,” said Rep. Don Bacon, R-Neb. The new jets would have replaced the 55th Wing’s two OC-135 Open Skies jets, which were built in 1961 and have suffered frequent mechanical breakdowns in recent years.

The RC-135 flights near Kamchatka are "classic Cold War reconnaissance" and likely tied to a build-up of Russian troops along the Ukrainian border, says a 55th Wing veteran.

Gov. Pete Ricketts symbolically "reopened" the Lincoln Air Force Base on Friday and formally welcomed the 55th Wing from Offutt, where an almost $150 million runway construction project is underway.

The Russian parliament's lower house voted Wednesday to withdraw from an international treaty allowing surveillance flights over military facilities after the U.S. departure from the pact.

Two Offutt-based OC-135B jets, shown parked at Lincoln Airport last month, will soon be retired. The planes, which for nearly 20 years have flown missions over Russia as part of the Open Skies Treaty, will be be mothballed in a “boneyard” in Arizona and eventually scrapped.

An Open Skies OC-135B jet at the Lincoln Airport in March. The move to junk the jets had been rumored since the Trump administration formally withdrew the United States from the treaty in November.